The Pashley Princess: a Retrospective from a Former Owner While we are still in hibernation season, I wanted to write a retrospective review of the Pashley Princess I used to own. My existing review of this bike was written after only a month of ownership and leaves a great deal out. I hope to make this review more representative of my overall experience, while providing the sort of information that might be helpful to those shopping for a new bike.

I owned a Pashley Princess Sovereign from June 2009 until August 2010. A lugged steel bicycle made in England, the Princess is a thing of beauty and quality. It was my first "nice" adult bicycle, and the first bicycle I've ever ridden for transportation. As such, it saw me through a period of almost continuous transformation as a cyclist - defined by changes in skill level, confidence, knowledgeability, and preferences. For that reason, I will arrange this review chronologically - from the start of ownership to the end. 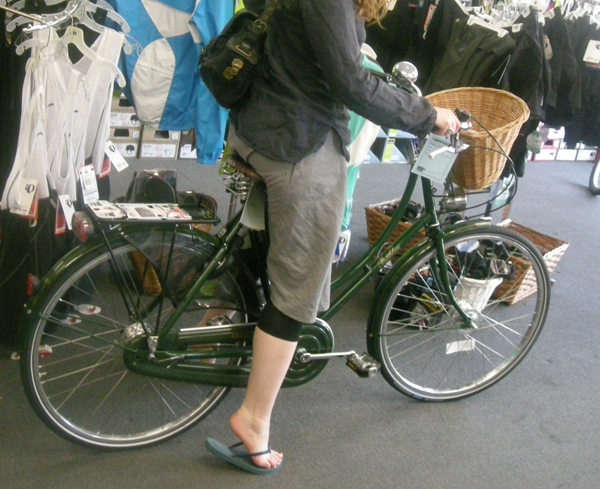 The Decision to Purchase
My Pashley was not an impulse buy. I did a lot of research, test rode a number of bikes, and took my time deciding. Among the other bicycles I test rode at the time were Gazelle, Batavus and Velorbis. During those test rides, I remember that I did not feel comfortable with my ability to control the Dutch bikes (Gazelle and Batavus) in comparison to the Pashley. I did not understand why at the time, but now I think I do: Dutch bikes have a light front end, which can take some getting used to. The Pashley's handling felt natural from the start. As for Velorbis, I remember thinking that it was similar to the Pashley, but not quite as nice, and so it was out of the running. I also admit that my deep attachment to England - where I spent a good part of my twenties - influenced me as well. I liked the idea of having an English bicycle. First Impressions
I purchased the Pashley Princess Sovereign in June 2009 from Harris Cyclery (not a sponsor at that time), together with my husband's Pashley Roadster Sovereign. I chose the 20" (medium) bike in "regency green," and immediately made a number of modifications to it, including the installation of a 7-speed coaster brake hub, netted dress guards and Brooks leather washer grips, as well as extra lights to supplement Pashley's lighting system. All lady's Pashleys have 26" wheels. Detailed specs can be found in my earlier review. The bicycle's saddle height traveled steadily upward over the course of my ownership. When I first began cycling as an adult, I was extremely nervous about it and felt that I needed to be able to have my feet almost flat on the ground while remaining in the saddle. Over time this nervousness went away as I began to pick up bicycle handling skills. The 20" frame accommodated me throughout this process. As far as ride quality, initially I was quite pleased with it. What I liked the most about the Pashley Princess was its stability and feeling of "solidness." It made me feel very, very safe - which in turn "empowered" me to try vehicular cycling. Pretty soon, I - a clumsy novice - was cycling for transportation daily in Boston traffic. What I didn't like so much about the ride almost from the start, but could not immediately express, was how much I struggled to pick up speed and go up hills on this bike. But at the time I thought that this was normal for classic upright transportation bicycles, and did not see it as a problem. One thing that caused some frustration in the beginning, but was entirely my fault and not the bike's, was  the question of how to transport my laptop. I did not trust the idea of clip-on panniers, and the front basket did not feel entirely stable with a huge bag in it. So, for the first few months of owning this bike, I carried a messenger bag. But eventually I stabilised the front basket by securing it with a myriad of zip ties and began to transport my laptop bag inside it - which was fine. However, had I just bought a clip-on pannier, such as the Fastrider I now own, it would have been even better. Discovery of Limitations
The first inkling that my Pashley may not be the right bike for me, came after I acquired and refurbished a vintage Raleigh Roadster. Despite being larger and clunkier, the old Raleigh DL-1 was considerably faster to accelerate and easier to ride up hill than the new Pashley. I was stunned by the discovery of these differences, and my interest in frame geometry and ride quality was launched largely as a result. With the arrival of Winter 2009-2010, my qualms about the Pashley's handling were temporarily forgotten, because as a winter bike it was truly fantastic. Since I ride slower in the winter anyhow and stick to shorter distances, acceleration and climbing long hills no longer played an important role in day to day transportation cycling, and I was once again happy with the bike. But as soon as the snow began to subside, the frustration began anew. The more skilled and confident I became as a cyclist, the farther I started to travel, and the more torn I began to feel about the Pashley Princess. It was such a sweet, well-made, picturesque and iconic bicycle - How could I even think of giving it up? But beyond gentle trails and neighborhood streets, I felt limited on it. Experimentation and Modifications
In Spring 2010, I began to experiment with the Pashley's positioning and components in order to address my complaints: I lowered the handlebars, raised the saddle, replaced the sluggish Marathon Plus tires with the faster Delta Cruisers, and even removed the front wicker basket in hopes of reducing wind resistance. Each of these changes indeed made a difference, and to my delight the bike now handled similarly to the vintage Raleigh. I also installed a set of Wald rear folding baskets, which improved my quality of life immensely. The Decision to Sell
At this point, I was once again happy with the Pashley Princess and had decided to keep it after all. I rode it for most of the summer without complaints. But then, something unexpected happened. By some bizarre stroke of luck I came across a 1990s Gazelle, which I was able to acquire for less than the cost of a Brooks saddle. The second-hand Gazelle handled similarly to my vintage Raleigh, but it was newer and I felt more comfortable using it for transportation. Once I had the Gazelle and found myself riding it all the time, I could not financially justify keeping the Pashley. I decided to sell it and did so swiftly to avoid further agonising over the decision. It was a beautiful bicycle, and I basically learned transportation cycling while riding it. But I do not regret my choice.

In Conclusion
I would describe the Pashley Princess as an elegant and well-made bicycle that is perhaps best suited for those who prefer to cycle slowly and do not live in a hilly area. But ride quality is highly subjective, and so I would recommend reading as many reviews of this bicycle as you can to get a sense of how others feel about it. After all, Katie Doncaster toured across Europe on hers and found it to be well suited for the trip. It is also worth noting, that the Princess model should not be compared to the men's Roadster model, as the latter has 28" wheels and possibly different frame geometry (it looked like it, but we didn't measure when we had both bicycles). While I decided to sell my Princess, my husband continues to ride his Roadster [edited to add: and has now posted a 2-year review].
Labels: bicycle reviews Eustacia Vye Pashley