Paceline Ride, Take 2... or How I Psyched Myself Out, Then Had Fun After All 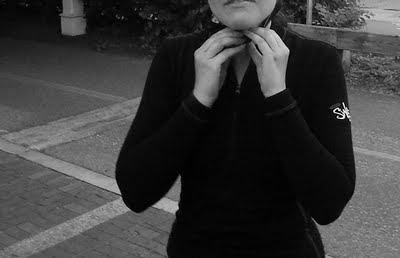 After two weeks of cancellations due to inclement weather and a week skipped due to injury, I finally did my second paceline ride. Because so much time passed since the previous one, the whole thing had gotten completely blown out of proportion in my mind, and I was even more nervous than before. I was now convinced that it wasn't being on a touring bike that made the ride strenuous for me last time - it was just me, being hopelessly out of my league. Was I prepared to face the embarrassment of arriving on my 110% appropriate loaner Seven just to have the same experience as before?

But moreover, as time passed I began to question whether pacelines were really a good idea for "someone like me." Since my write-up about the first ride, I've been warned by readers and acquaintances alike about how unsafe pacelines are, how ruthless the members of this particular cycling team supposedly are, and how there was no need to go to extremes - why not join a nice social group ride instead? I've even received links to videos of paceline crashes, just to make sure it sunk in what sort of danger I was exposing myself to. Though I took it all with a grain of salt, I would be lying if I said it didn't get to me. When I arrived to the meeting point for the ride, I was so nervous that I had to practically shove myself toward the group of women sitting on the grass. I can't believe that I managed to psych myself out to that extent. I did the ride, and it was great.

To clear up a misinterpretation of my previous post on the part of some readers, I never meant to suggest that the atmosphere of the last paceline ride was anything but welcoming. The leaders told me I had the wrong bike not because they were being unfriendly, but because I did have the wrong bike for that type of ride. This was an introduction to a sport and I basically showed up with inappropriate equipment. This handicapped me in comparison to the other participants, and they were simply letting me know that. My description of doing the previous ride on a touring bike was meant to show the humour of the whole situation, and not to criticise the nature of the ride or its organisers - for whose guidance and time I am genuinely grateful.

This time around, the difference in speed was so obvious that it is hardly worth discussing. Yes, a Seven Axiom set up for racing is faster than a Rivendell Sam Hillborne set up for touring, and to frame this as some profound realisation would be absurd. Still, I was tremendously relieved to have real evidence and not just assurances that "the right bike" would make such a difference. The right bike does not have to be a Seven of course. But it needs to be a light, aerodynamically set-up roadbike with closely spaced gearing and modern combination levers. When that's what every single other person in the group has, then that's what you need to have in order to be on equal footing.

Our group was larger this time and by the middle of the ride it was evident that a gap kept forming in the same spot. So we split into two groups and I ended up in the faster one. This was fantastic. I was mostly in the big ring for the rest of the ride, took more turns in the front, and practiced rotating while going full speed downhill. One of the leaders made sure to pull up alongside me and cycle as closely on my left as possible on the descent, having noticed that I am scared of that kind of proximity. With no way of escaping, I thought I'd lose my marbles and crash into a tree out of sheer fear of sensing her elbow 1" away from mine. "Oh my God, you're too close to me!" I pleaded. "No I'm not. Keep going. You need to get used to this." And I guess she had the right idea for how to deal with me: I got used to it.

At this point I am probably horrifying some of you again and making you wonder what on earth attracts me to this type of cycling. Honest answer: I don't know. But something definitely does. I like the speed. I like being in a paceline. I like receiving straightforward feedback about what I am doing wrong. I am relieved to know that my speed and endurance are up to par. My technique needs a lot of work, because I am still somewhat scared of the bike, scared of downhill speeds, and not entirely comfortable with constantly shifting gears. But all of that can be improved if I am willing to practice. The funny thing about human psychology, is that we tend to do what feels good without really knowing why, then construct elaborate rationalisations of our actions after the fact. But right now I'm too tired and confused to rationalise. I don't fully understand why I like the paceline rides. But I know that I want to keep doing them.
Labels: paceline ride reports roadcycling technique