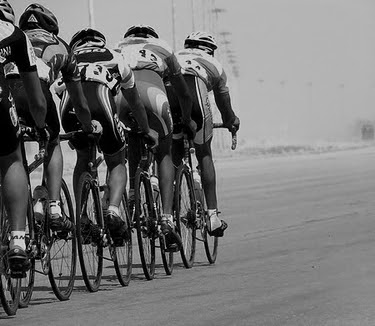 Well, I did it. I showed up at the weekly women's paceline training ride that is organised by a local cycling team. The very same one I've been talking about forever. It was the first ride of the season and I figured that I should just go, before I lose my nerve and spend every week telling myself "maybe next time" while the entire summer goes by. So I went, and apparently survived - though just barely. Let me tell you about it from the beginning...

It was overcast and threatening to rain all afternoon, but I checked the team's website before leaving the house, and the ride was on. The meeting point was in Lexington, MA - which is 10 miles from where I live. I rode my bike there, taking care to go at a leisurely pace so that I wouldn't already be tired upon arrival. I was so nervous, that I needed all of those 10 miles just to calm down.

I spotted the meeting location immediately. There was a crowd of several dozen women in roadie attire and as many bikes lying on the grass and propped up against trees. My heart sank as I saw them. I guess I had expected more of a mix: Some women on modern carbon fiber and others on old 10-speeds; some in clipless shoes and others not; some in lycra and others in gym shorts. But no: Every single person there had a super-light modern roadbike with "brifters." Every single person there was wearing clipless shoes. Not a soul had a kickstand, fenders or racks on their bike but me. Not a soul had a bag attached to their bike. No one else had, um, a twined stainless steel water bottle. And all wore lycra - the club-affiliated cyclists readily distinguishable by their team kit. Thankfully, at least I wore my wool cycling knickers and jersey and not something more casual. Reluctantly, I approached.

Greeted by a woman in team kit who looked like she was in charge, I was pointed to a bench where everybody was signing waivers. I made the mistake of starting to read the waiver, but the things described there were so horrible that I stopped and just signed it. When I returned to the spot I'd left my bike, two other women-in-charge were gathered in front of it. Was this my bike? Yes... The one I was planning to ride? Yes... They examined my Rivendell touring bike as if it were a 100-year-old antique or a creature from outer space. There was some debate as to whether it would be allowed: My bicycle was extremely heavy, the tires were too wide, and I did't have the right shifters. I would have trouble doing the ride. Was this even a roadbike? Only roadbikes were allowed. Finally, the senior-most woman was called to resolve the issue. In the end my bicycle was deemed allowable, but I was warned that I might have trouble doing the ride; in the long run I would need a different bike. I tried not to get too intimidated by this. The group I planned to join was described as "paceline learning skills for beginners, 12-15mph." I could ride at that speed with my eyes closed (just a figure of speech, don't worry), so all I had to do was focus on the skills. So I stayed.

The crowd was split into groups and the beginner's group consisted of eight of us: six newcomers and two leaders. The leaders gave us a brief explanation of what it meant to ride in a paceline: The group cycles in a single-file procession, staying close to each other's wheels in a straight line. When the person in front gets tired, they move over to the left and drift to the back of the line, then merge with the paceline in the rear. This gets repeated every few minutes. One thing that makes perfect sense but I hadn't realised in advance, is that you cannot coast in a paceline. Whether going fast or slow, cyclists must keep pedaling at all times, because that is how members of the paceline are able to maintain uniform speed - they synchronise their leg movements. So, coasting is forbidden. Hard braking is also forbidden, as it can cause the person behind to crash into you. To slow down, you need to keep pedaling while "feathering" the brakes. Finally, there is a system of signals that members of a paceline must use - from the person in front indicating that they will move to the left now, to warning about potholes, to asking to merge into the middle of the paceline if you are drifting back on the left and there is a car coming. We were quickly shown all of these, and without further ceremony we set off on our 20 mile ride through rolling hills.

Apparently I am an extremely poor judge of my own strengths and weaknesses when it comes to cycling. I had thought that my biggest problem would be technique. I expected to experience debilitating fear when cycling 6" behind someone's wheel, to be dangerously clumsy at executing paceline maneuvers, and to be slow on the uptake whenever instructions were given. On the other hand, I expected myself to have no problem at all with the pace and terrain of the ride: I mean, 12-15mph? Please!

Instead, the exact opposite happened: I found the paceline training itself to be natural and had no problems with technique. I behaved predictably and signaled appropriately. I didn't coast and I feathered the brakes, modulating my speed smoothly (having ridden fixed gear made this pretty intuitive actually). I reacted quickly and calmly when instructions were given to me. I never once swerved or did anything crazy out of fear or incompetence. In short: all my worries about being poorly coordinated and getting flustered around other cyclists were completely unfounded.

On the other hand, keeping up with the pace proved to be challenging and I wish I could say it was the bike's fault. I don't know how to explain it. Maybe it was the no-coasting thing that did me in, combined with the fact that 15mph was the typical speed on flats, with 12mph being the uphill speed and 25mph the downhill speed (while still trying not to break the paceline). Anyhow, I felt extremely unfit on the uphill portions of the ride, huffing and puffing as I struggled not to lose the wheel of the person in front of me. On these occasions, the leader cycled alongside attempting to reassure me: "You see now?... You're at a real disadvantage with that bike... But you're doing well... Breathe... That's right... Good... Next time, different bike..."

Truthfully, I don't know whether it was the poor bike's fault or mine. All the other girls on the ride were athletes of some sort - runners or "spinners" (i.e. at the gym, on stationary bikes), looking to transition to roadcycling as a new sport to try. My background is very different. I am not an athlete and have never been an athlete. And I have done zero exercise all winter other than riding upright bikes for transportation. So maybe it's really a case of "next time, stronger leg muscles." I would be curious to try the same ride on a modern roadbike and see whether it's any less difficult, but I am skeptical.

There were other problems with my bike on this ride: Namely, the shifters, brake levers and possibly even handlebars. With my friction bar-end shifters, I was at a distinct disadvantage to the other girls, who could shift instantaneously thanks to their indexed "brifters." It was a little ridiculous actually. Moreover, moving my hand to the edge of the right handlebar in order to shift was problematic, because it is a similar gesture to the signal used for indicating pulling over to the left (you have to wiggle your right elbow). In that sense, using bar-ends in a paceline where no one knows what they are has the potential to cause an accident if the person behind me interprets my changing gears as inviting them to move forward.  Do I want to be responsible for that?... As for using the drops: I cannot modulate my brakes well from that position because of how my handlebars are shaped and set up, and so I only brake from the hoods. When going downhill, the leader wanted us all to get in the drops for maximum "aerotuck." She kept telling me to do this, but I refused because it wasn't a safe position for me to feather the brakes from.  So I stayed on the hoods, but bent my elbows so much that my chin was practically on my handlebars, achieving the aerodynamic positioning they wanted. They were okay with it under the circumstances... but it was yet more evidence of my needing a different bike - with shallow drops and with brake levers I could modulate from all positions.

If all of this sounds like a miserable, degrading struggle, then I've done a good job of describing it. It went on for an hour and a half as we cycled past farms, forests and highways practicing paceline maneuvers. But there were a few minor advantages to my bike as well. At some point it began to rain, and the group leaders grew alarmed - contemplating shortcuts back in case the rain continued. At first I could not understand what the problem was, but eventually realised that their bikes were prone to "wiping out" on wet terrain. Thankfully, that is one problem I don't have on my own bike. There was also a fear of sand. Sand on the road was signaled down the paceline as if it were a pothole to avoid. Not something I normally worry about. While these advantages were fairly minor compared to the disadvantages I experienced, they provided at least some relief.

We arrived back at the meeting point just as it was growing dark, and the girls began taking their bikes to their cars. When they learned that I had cycled from Somerville and now planned to cycle back, several of them offered to give me a lift. But I opted for a quiet ride home on the (now pitch-black) Minuteman Trail, to review the evening'e events in my head and relax. I cycled slowly as the lights on my bike illuminated my path. It was a beautiful night, and when the rain started up again the smell of the surrounding meadows grew pleasantly strong. I never, ever had to do the paceline ride again if didn't want to, but could just quietly cycle in the dark like this on my own forever. And yet?...
Labels: paceline ride reports roadcycling technique