The Velo Orange mixte frame that was discussed here a few months back is finally finished and available for sale. I felt the need to announce this, because VO made the crucial change to the original prototype I was so hoping for: They made the seat-cluster as beautiful as the rest of the frame! 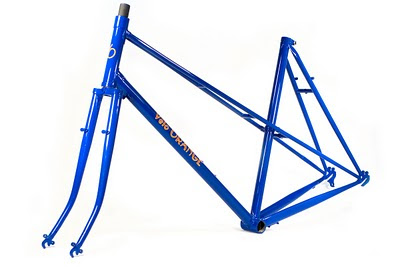 I was so excited when I saw the new frame on the VO website and noticed the change! 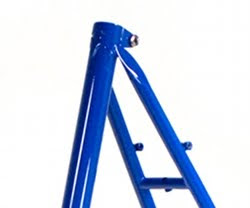 In case you have no idea what I am talking about: The seat cluster is the part of the bicycle frame where the top of the seat tube meets the two rear stays. On the final VO mixte frame, the seat cluster (image on the left) is beautifully, delicately lugged. Why do I care about that? Well, I just happen to have aesthetic preferences when it comes to seat clusters and fork crowns, so these little details are important to me. It has also been pointed out that the new design allows for greater fender clearance than the prototype. 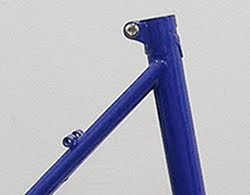 The difference between the final design and the prototype (image on the right), is that in the prototype the rear stays were connected to the seat tube itself, underneath the lug. Since earlier I criticized the prototype seat cluster, I felt it is only fair that I inform readers of the change.

In my view, this is now hands-down the nicest non-custom mixte frame available for sale at the moment, especially if you prefer the classic "split top tube" (twin lateral stays) version of a mixte. Oh, and the price is $525 USD. I fear the gods of mixte gluttony will smite me if I covet this frame (oops, I just coveted it!), but who-ever gets one of these beauties will be one lucky lady. If you buy one, please send me pictures of it built up, so that at least I can love it vicariously.

I have no affiliation with Velo Orange other than being a paying customer; just genuinely happy that they made this frame available to the public. [Edited to add: Velo Orange became a sponsor of this blog in 2011, but was not at the time of this post.]
Labels: bicycle industry framebuilding lugs mixte Velo Orange