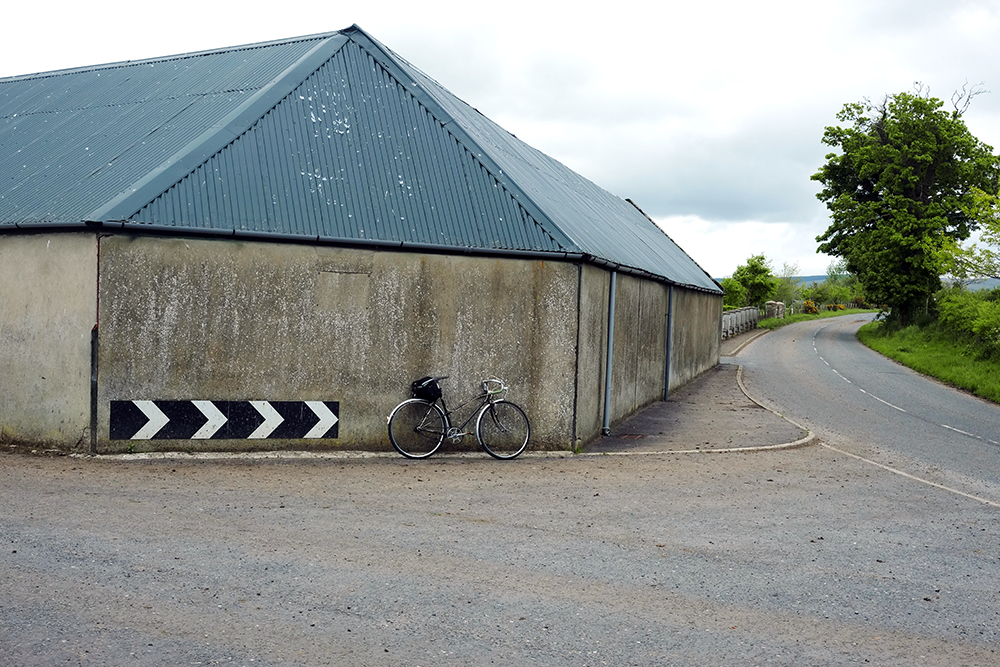 It began innocently enough. Getting ready for an appointment in town, I was late going out the door. This was not a big deal of course. I would just cycle a bit faster. I usually end up arriving early anyhow.

It had looked to be nice and clear outside and I had not bothered to check the weather. As a result, I now found myself pedaling into a monstrous headwind. But, well, that's just the reality I am faced with here - a circumstance that is by no means new to me.

Heaving my bicycle forward along the flat road with the force I would use on a 10% climb, I remained in good enough spirits. If this headwind persisted the entire way into town, the 7 mile trip would take longer than expected; I may actually be late for my apointment. Not the end of the world though. I would check on the time closer to my destination, then phone or text if running late.

I was plodding along at a decent rhythm, until I spotted before me that most dreaded of rural occurrences: the bovine traffic jam. A large herd of cows was being moved from one field to another, a ways down the road. This chaotic, mooing echelon, guided by young farmers on rumbling souped-up quads (ATVs), was only now departing from the gate of the first field and beginning its reluctant slog toward their destination some 200 meters away. With every inch of the narrow winding road taken up by the massive, stumbling creatures, it was all I could do to quickly scramble off to the side, and pressing my bike into the hedges, wait until they passed - staying as still as possible so as not to invite their curiosity and further slow their progress.

Nearly 10 minutes later, the road had cleared. I took out my phone, only to find there was no reception. I also saw my battery was precariously low and realised I must have failed to charge the thing overnight. Starting to get a little annoyed now, I got back on the bike and pedaled the remaining distance into town with determined vehemence.

Finally I arrived - a little worse for wear, and probably smelling faintly of cows, but really not too bad, all things considered. The person I came to meet was not there. I took out my phone and rang her. There was no answer. I waited 5 minutes and rang again, whereupon the phone's battery promptly died. With a frustrated sigh I walked into the cafe next door, hoping to borrow their phone charger. In the meantime I would get something to eat, as the 7 mile ride into a headwind had left me starving.

At the counter I joined the rather long queue, and, anticipating my turn, reached into my pocket. The pocket was empty. It shouldn't have been, as I remembered distinctly stuffing a £20 and also a £5 note into it before heading out the door - thinking that this would more than suffice for the day and not bothering to also take my bank card. Now the notes were not there. Feeling flushed in the face, I stepped out of the queue and checked my other pockets. Those were empty as well. Before walking out of the cafe, I asked the girl behind the counter - who I know uses the same phone as I do - whether she had her charger. Ah! Usually she did, she said. But today she'd forgotten to bring it in.

I walked outside. As my stomach rumbled, so did the sky. And then the rain began to pour, in violent relentless streams.

Not knowing what else to do, I decided to write the morning off and walked back to my bicycle. The saddle was wet, as I had not thought to cover it when going into the cafe.  Feeling the damp under my skirt, I pedaled angrily home. I do not often get angry, but a wave of it now washed over me - a helpless sort of frustration over the wasted time, the missed appointment, and my own incompetence (why had I not charged my phone? and where had the money I'd brought with me gone?). At times like these I am also prone to question the wisdom of persisting to cycle for transport. Could I really hope to be reliable and productive, in a place like this, on a bike?

But I kept pedaling. And eventually my mind quieted. These thoughts began to fade away, as did the waves of anger. And then, as the rain began to subside and the sky to resemble its earlier morning clarity, I noticed something odd. Not so much noticed rather, as felt...

Look - have you ever wished you could just rewind a day? It's a childish thought, I know, but at some point I think we all have it. You know, just wishing you could undo thing, perhaps by retracting your steps and backing out of whatever cycle of unpleasantness you've managed to stumble into? Well, a couple of miles into my ride home, I was suddenly overwhelmed with the sensation that this exact thing was happening. It wasn't anything specific at first. Maybe something about the scenery, or the atmosphere - combined with a dose of wishful thinking - put this notion into my head.

But no sooner did the feeling take hold of me, than I spotted the tail end of another procession of cows being moved across the road - this time just missing the "traffic jam," cycling by as the last of the animals trotted through the open gate, which was promptly shut behind it.

I continued to pedal, musing over the symmetry of it. Until, about a mile later, I spotted something across the narrow road out of the corner of my eye, and, while I could not say what it was, some sense of intuition guided me to stop and check it out. When I did, I discovered crumpled paper money, stuck between the fine thorny branches of a pink flowering bush. It was a £20 note and a £5 note.

Oh what a weird day this was turning out to be. No longer in a bad mood, I looked forward to arriving home and sharing this story with someone - after ringing the person whom I had so rudely stood up, of course, to apologise. We were meant to discuss a project that I'd been very much looking forward to. The last thing I'd wanted to do was make a bad impression by not showing up.

Cycling down the lane to my house while thinking this, I noticed an unfamiliar car in the driveway. And just as I hopped off my bike, the car door opened and out walked the very lady in question.

"I'm so sorry!" she began right away, flustered. "My car wouldn't start! Then, the rain! Oh and - can you believe it? - I left my phone at home! Anyway they said at the cafe next door you'd gone, so I stopped here on the chance of catching you at home."

"Oh! No worries at all," I said, the picture of understanding. "How about a cup of tea?"

She followed me indoors as I peeled off my wet jacket. "God, but you must have been raging, waiting for me in that rain. That stupid car of mine. I tell you what: You may be onto something with those bicycles of yours..."
Labels: rural cycling stories transport