"So, what's so weird about the Irish landscape?" asks a curious friend, in the course of yet another "I am trying to envision you there, but can't" long distance phone conversation. I had mentioned the landscape's "uniqueness" and she presses me now to elaborate. "What strikes you as the most distinctive feature?"

I consider the question seriously, closing my eyes and allowing for an image to develop in my mind's eye like a photographic print.

"Well, for starters - there's the trees."

"The trees? What about them?"

"They're all crooked. You know - twisted, bent, warped. They look like they creep and swoon and reach out for things, rather than just grow as normal trees do. "

On the other end there is silence. Then: "Hey. Are you sure you're all right over there?" I used to ask the locals what kind of trees they were at first - having assumed that they were a specific species, as their chaotic forms shared such a distinct aesthetic. But soon I understood that nearly any tree growing in Ireland takes on this twisty, meandering, almost ivy-like quality. Be it oak, ash, willow, rowan or pine, over time the crookedness eclipses any distinguishing features of its species, until a Chestnut looks more similar to a Hawthorne than one might ever imagine possible.

What causes this distorted growth in the trees dominating the landscape? The logical assumption is that the strong winds are at fault. This is most obvious in exposed areas, where you can tell the dominant wind direction by the perma-bend of the trees. Even the cabbages grow crooked! But what then of the crooked trees in dense forests? In the unlikely event that a tree does manage to grow more or less upward, it is soon pounced upon by a host of vines, mosses and all manner of growths, whose surprisingly strong embraces will twist and turn it, and coax it back toward the soggy ground.

How the vines manage to arrange themselves in braided, almost geometric patterns is another wondrous feature of the trees. Often the vines are cut off at the roots by those who wish to see the tree live. But rather than shriveling up and falling off, the vines become petrified in place, clutching the tree and stunting its growth even while lifeless. What would those trees now look like with the vines forcibly removed, I have often wondered when cycling past these grotesque living statues. 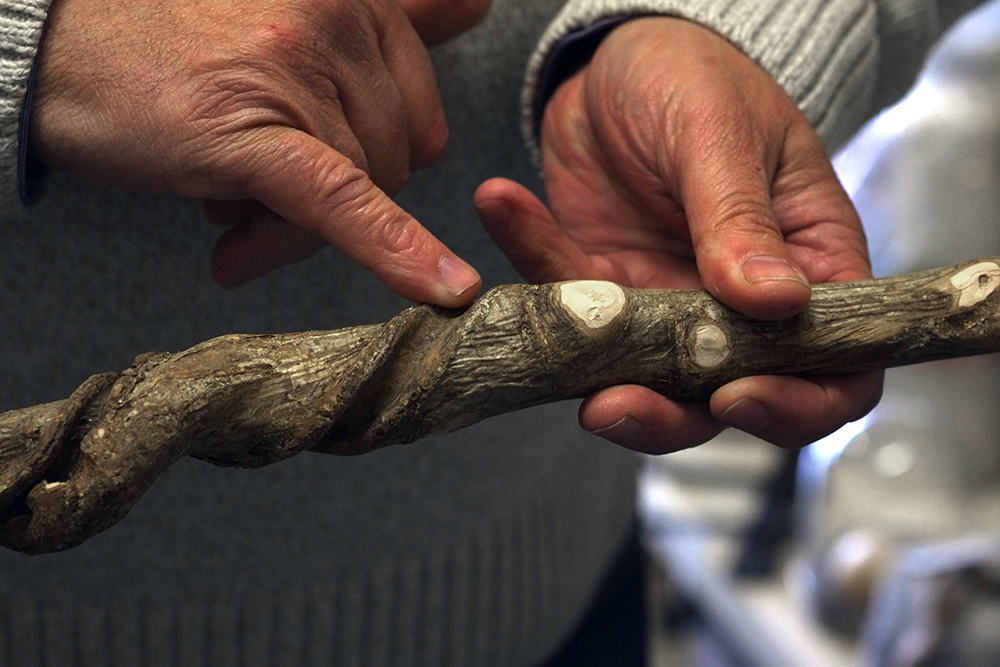 Unexpectedly that question was answered for me one day as I happened past a shop window in the small market town of Limavady. Inside its crafts and furnishings filled interior, a friendly looking gentleman was standing next to a vise in which appeared to be clamped a long wooden stick. To my delight I realised this person was making a shillelagh - a traditional Irish walking stick. Unable to help myself, I stopped my bike and walked in. 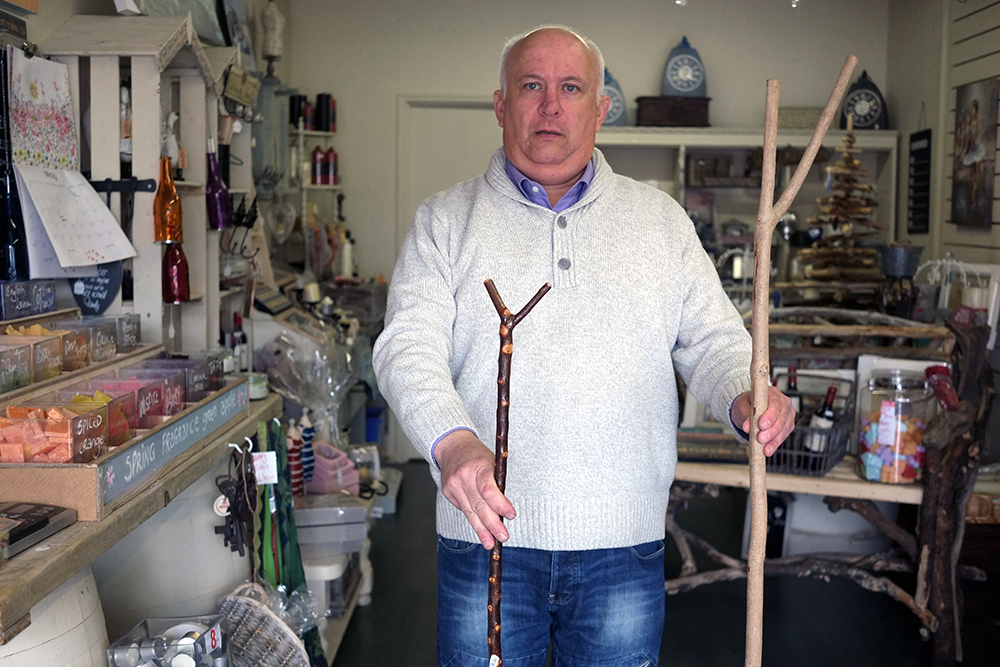 While, admittedly, my personal interest in shillelaghs is limited, I receive a surprising number of queries from American readers regarding where to purchase a "genuine" one. Happily, I am now equipped to advise on this matter: You can purchase a most assuredly genuine shillelagh, custom made to your specifications, from Raymond Boyd (raymondboyd23-at-hotmail-co-uk) - for a price that I assure you is gasp-evokingly reasonable. 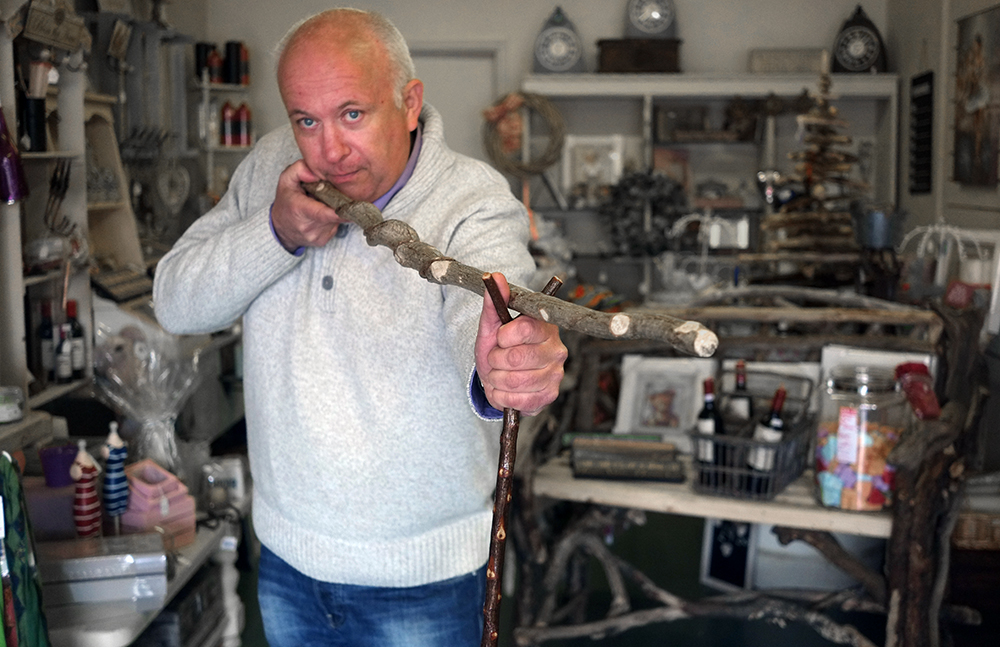 After explaining the difference between shillelaghs used for walking, shooting, shepherding, and even fishing (see: "priest"), Raymond showed me his process for making them. 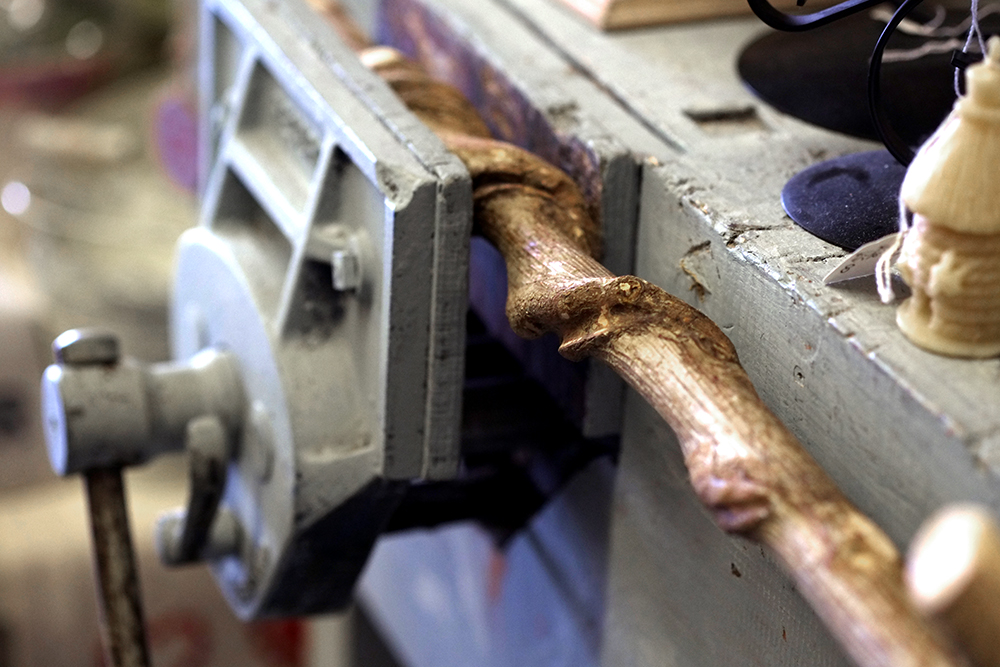 Because the sticks are made out of branches - most often hawthorn and blackthorn - which are inevitably quite crooked, after being trimmed, de-barked and cut down to size, they need to be straightened. This is done by steaming them, then drying them in a vise - a process that sometimes calls for several attempts. 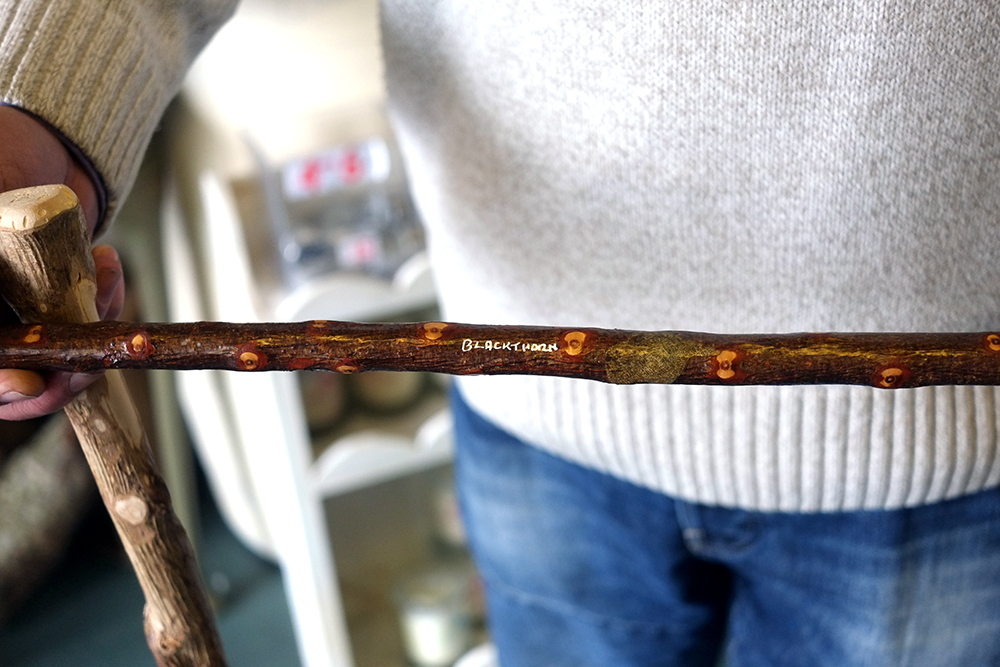 Afterward, the sticks are cured, painted or lacquered, depending on the look and feel one is going for. Often decorative embellishments are added. Because the Roe Valley area is known for its salmon fishing, local makers of shillelaghs will sometimes decorate the sticks with tiny images of salmon. 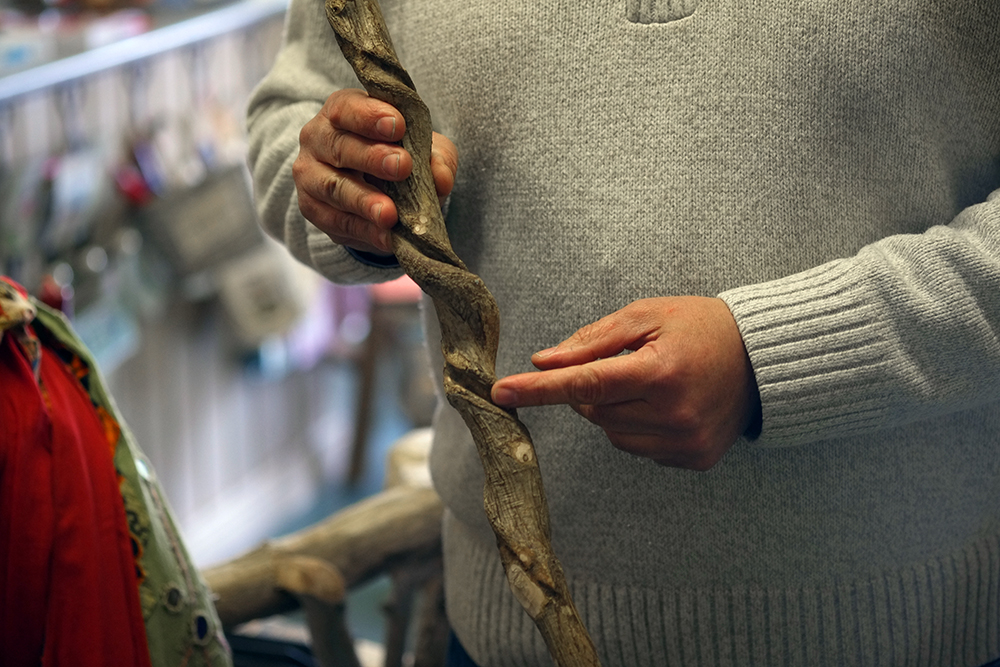 But by far the most prized embellishments are the natural variations in the wood - such as the spiral indentations made by those braided choking vines, for instance. 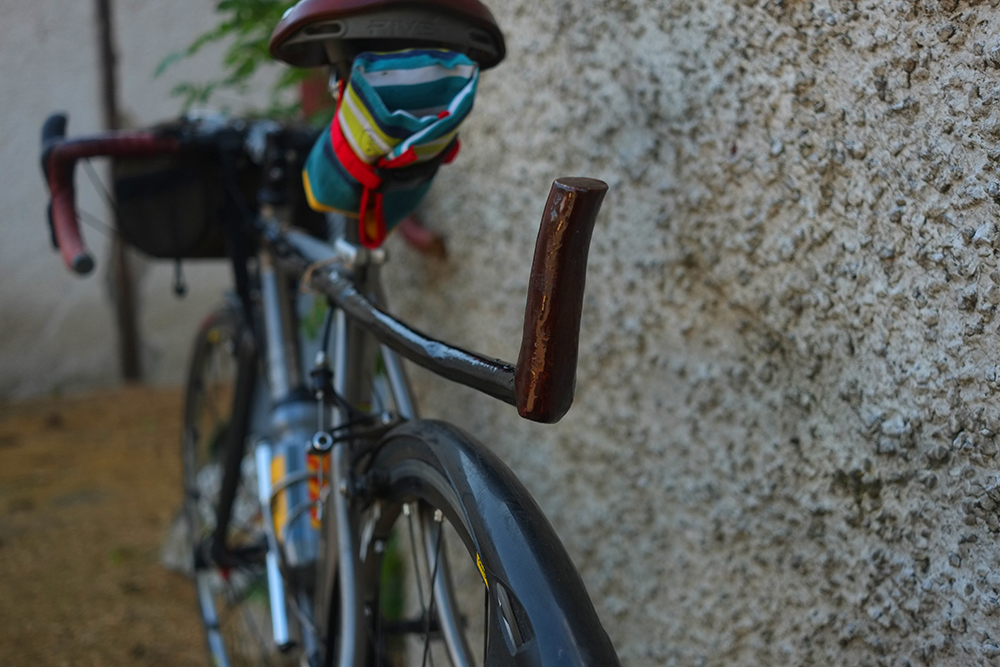 Having eyed up a modest shillelagh that I wanted to buy as a gift, I wondered out loud whether it was a good idea to cycle with it (this was only the start of my ride, and I had planned to do about 30 miles). 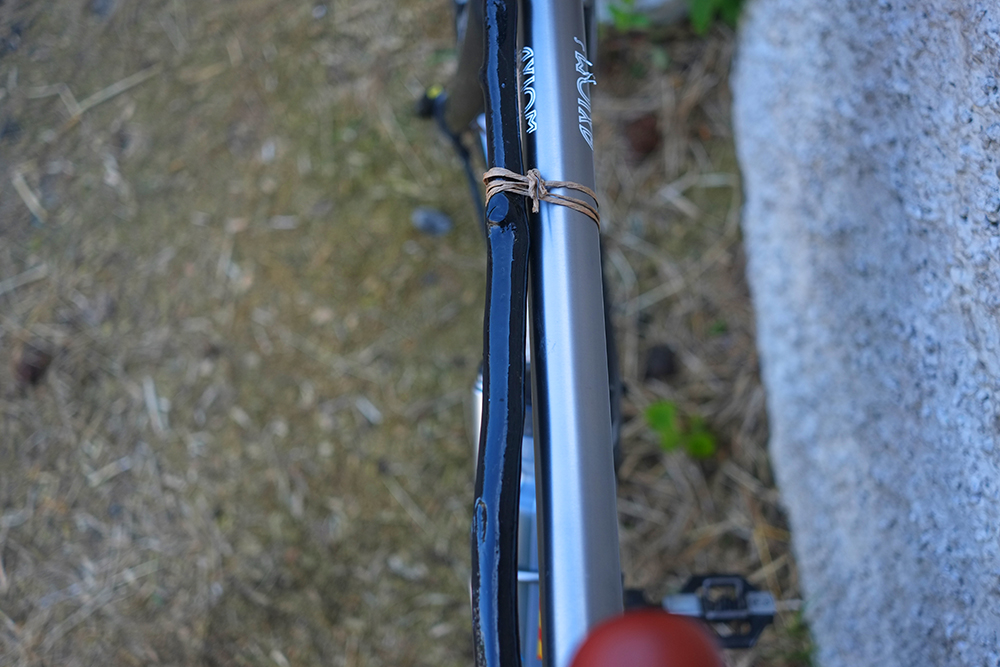 Next thing I knew, we were attaching it with twine to my bicycle's top tube, the usual "Ach it'll be grand!" reassurances uttered. And funny enough - other than increasing my q-factor by a bit - the shillelagh was hardly noticeable. Staying in place for the duration of my ride it remained horizontally stiff and vertically compliant. 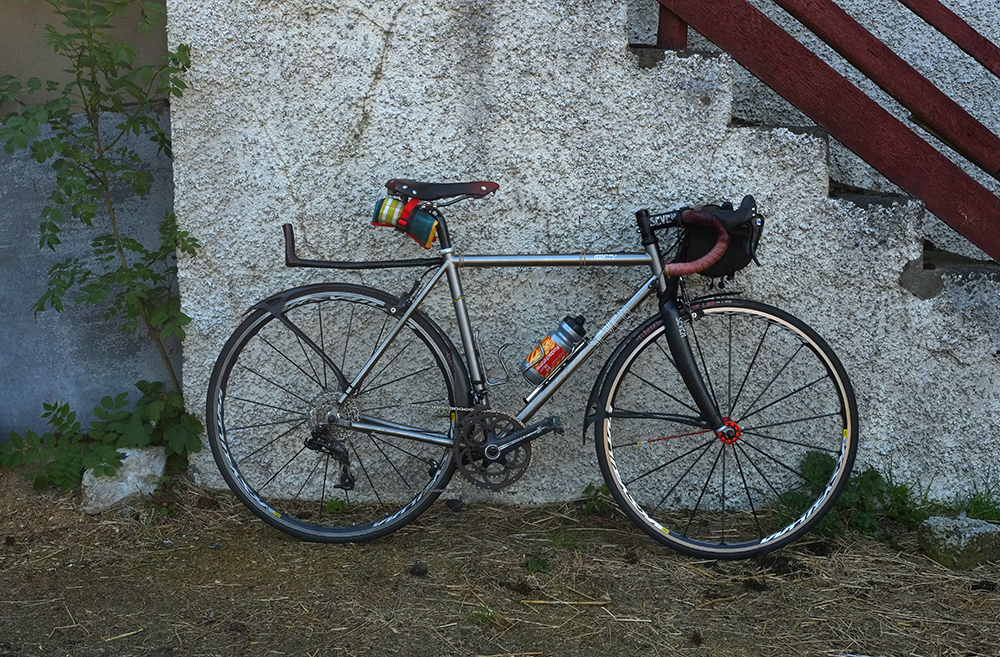 As I made my way home with a lacquered wooden stick tied to my top tube, I thought of the absurdity of it. Moreover, I thought of the absurdity and the loveliness of all those twisted crooked trees peppering the landscape. Even as we struggle to bend a stick into shape, it's the traces of crookedness that make it most charming, iconic, beloved and valuable. It is the same with the roads we love to travel on. And with the people we love to love. And with the thoughts and feelings we try to wrangle into forms we think they ought to have, only to be delighted when these thoughts and feelings surprise us by disobeying. The trees all around me, in their knotted untamable twistieness, appear to nod in agreement as they sway in the westerly wind.
Labels: Alice handmade Ireland stories