Somebody's Spokes and I Went Into a Dream 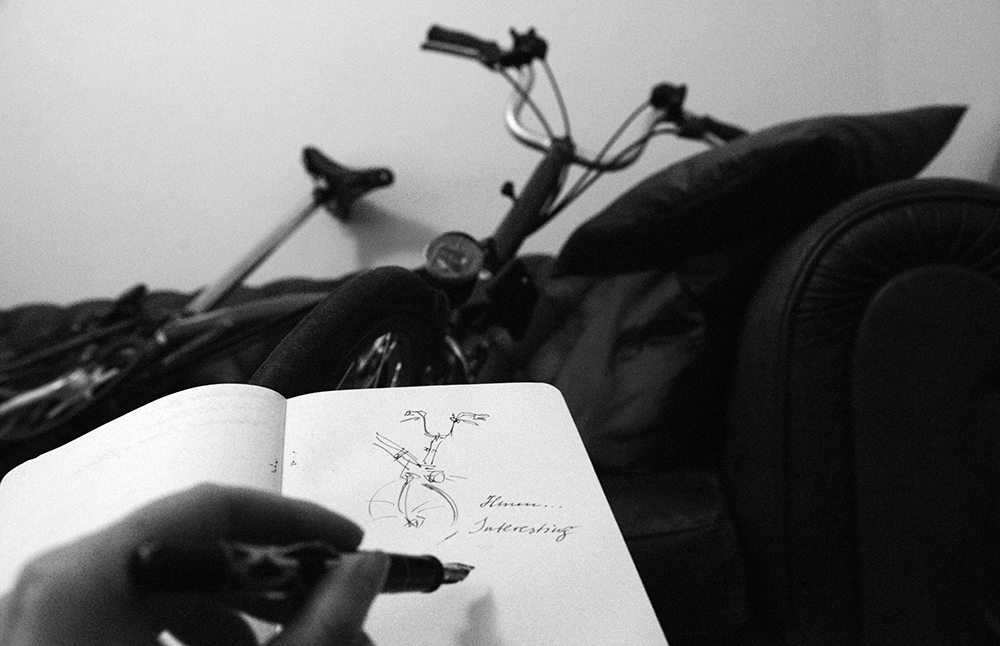 "So I was going down a descent. On the Brompton..."

"Yes... Well I didn't know what sort of bike it was to start with. But I was going down a descent and there was a lefthand turn on the bottom. And as I approached this turn I started to notice the handlebars were strange."

"Instead of being straight they had a set on them, to one side. The more I rode the worse they got. It got to the point where they were nearly sideways and I was looking down at the bike wondering what was going on. That's when I noticed the small wheel. So then I thought - this is the Brompton! It’s wrecked, I’ve wrecked her Brompton. Then I looked down at the front wheel and there was no tire. Or wait... I noticed the rim had… That is, my eyes were drawn to - you know the wee hole?"

"As I was thinking this to myself, some boy came by me on, like, this horrible looking mountain bike. Flying by, around the outside of me. I didn’t think anything of it, so I went on and rounded the bend, headed down toward the bridge that goes over. And then I got off the bike and the boy up in front of me stopped, coming over trying to be helpful. I was on the other side of the bridge at this point when I saw there was three other guys there. They were coming over. And then one of them was walking too near me, touching my pockets and things."

"Were these guys connected to the one on the mountain bike?"

"No, I think they were separate. The boy on the bike, he genuinely meant to help like, but he disappeared. It was then it dawned on me, that these other ones - they used the advantage of me being stopped and having got into difficulty. They seen their opportunity, coming over milling around when they had no call to be there, pretending to be helpful. But they weren’t helpful at all. These boys were trying to rob me off money in my time of difficulty."

"Naw. They were like these guys. Just, you know, generic sort of ones. They were not overly big or small or anything like that. But I can vividly see the face on one of them, coming at me."

"Well so then I was shooing them away. But they kept touching me and I lost my temper. I said, 'look get away from me!' But this one boy, he kept coming at me and I knew he was trying to steel things out of my pocket. He was touching my pockets and hanging around near me and he wouldn’t go away. So I pushed him. And at that he stepped out and I could see his face clear as day and I just... bang! I struck him, right in the face. And he come at me again and I give him another couple of digs. And his other mates were hanging, milling around at this point, and I hit him three good tight licks in the face. And then I just sort of come out of the dream and woke up."

"Oh, I don't know. I suppose I cycled back and tried to sneak it into the house without you knowing. Have you checked, is the rim inside out?"
Labels: bike friends Brompton psychology sketchy stories