Springing to Life: the Simcoe Roadster 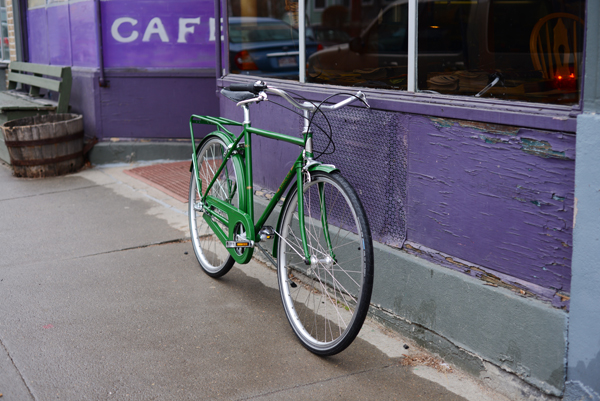 At one point, many of the European city bicycles available in North America were distributed by a company called Fourth Floor in Toronto. Through test riding the bikes they carried, I got to know the guys who ran Fourth Floor and eventually learned they were working on their own line of products. At Interbike 2012 the newly launched Simcoe was unveiled, with a display of prototype bicycles and bags. The idea behind the brand was to make a quality, yet no-frills classic city bicycle, at a reasonable pricepoint. The prototypes looked good, but the final product was not yet ready. By the time Simcoe bikes did become available it was Spring 2014, with a number of other companies promoting a similar concept. Would Simcoe stand out? In the final days of my last visit to Boston, I got a chance to find out, as the Bicycle Belle received a sample of the Simcoe Signature Roadster. We were actually expecting the step-through model, but there must have been a mix-up. No matter. No sooner was the diamond frame assembled that I took it out for a spin. 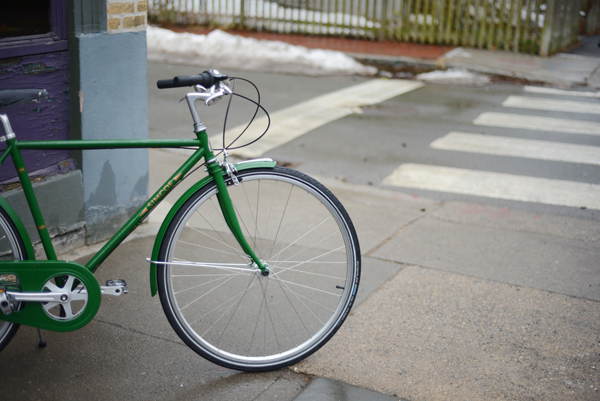 When I do a test ride for the blog, I will normally spend some time examining and photographing the bicycle before riding it. But the way this day worked out, I hopped on the Simcoe first, and only after the test ride did I even get a good look at it. So my first impressions were based purely on feel. And these impressions were two-fold. First, this bike felt like a vintage roadster. That mysterious ride quality particular to old English 3-speeds that modern manufacturers can't seem to recreate was there. It was not a cushiness attributable to obvious things like tire width or even frame flex, but to something different, something only those who've ridden bikes like the Raleigh DL-1 and the Humber and the Royal Enfield will understand, while others might be skeptical about (and perhaps rightly so!). Bike construction is not magic and every sensation can be explained if you look hard enough. Probably Simcoe tapped into the right combination of tubing, geometry, wheel rims, et cetera, to achieve this feel - either deliberately or due to sheer luck. Still - subjectively, that intangible "vintage bike feel" was there.

The second thing I noticed while riding the Simcoe, was that it fit me in a way that worked very well for stop-and-go city cycling. It is a long bike with a fairly low bottom bracket. This combination accomplishes several things that I like in a city bike. The low bottom bracket makes it possible to adjust saddle height so as to get full leg extension when pedaling, and also put a toe down at a stop without dismounting. The long top tube combined with the swept back handlebars gives the cockpit a nice roomy feel while allowing for an upright position. The length also prevents toe overlap with the front wheel, as well as "handlebar poke" on turns (the latter doesn't bother me, but some riders complain of it). While I much prefer to ride a step-through for transportation to a diamond frame, I could forgive this bike because it otherwise felt so nice.

As far as speed, Simcoe describes the Roadster as being "upright yet agile …perfect for short rides through the city, and long rolls through the park." This is pretty much spot on. The bike maneuvers, accelerates and progresses uphill nicely, especially considering its relaxed feel and length. But it is a city bike, so any comments on speed and climbing have to be taken in that context. Compared to other upright city bikes I've tried, it is on the faster end of the spectrum. The 3 speeds on the model I rode felt more than sufficient for the relatively benign hills of Cambridge I tackled. 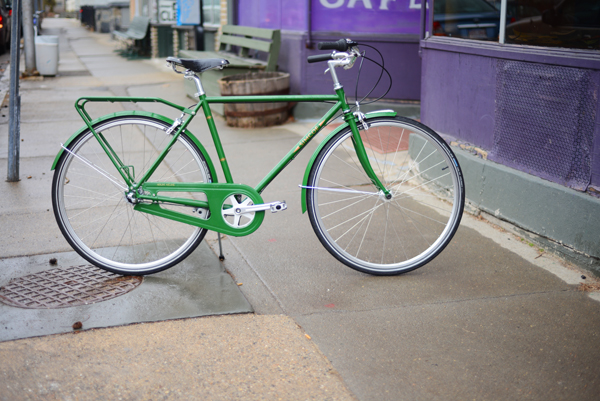 Getting back to the bicycle itself, the Simcoe Roadster is a fairly straightforward English 3-speed inspired city bike. Relaxed angles, upright position, hub gearing, fenders, chaincase, rear rack, kickstand. Front and rear caliper brakes. The Roadster bikes are available in 20" and 22" frame sizes, both with 700C wheels and 35mm Delta Cruiser tires. The weight is not stated, but I would estimate it to be between 30 and 35lb. 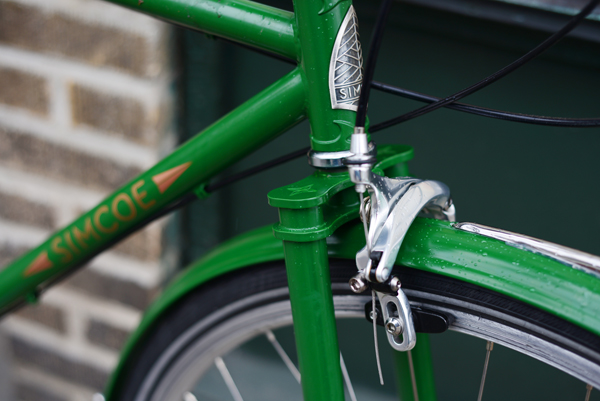 The Taiwan-made frames (described as combination hi-ten steel and cromoly) are welded, with a couple of faux-lug flourishes on the headtube. 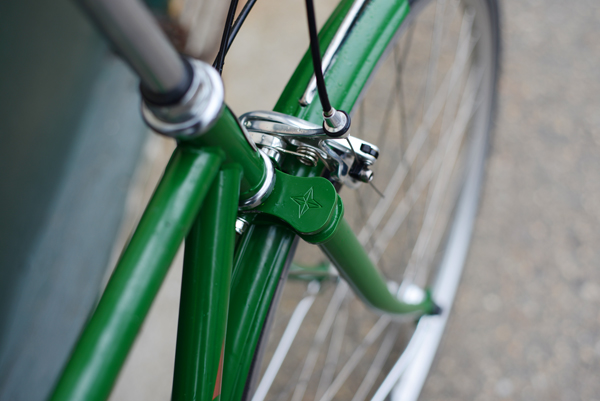 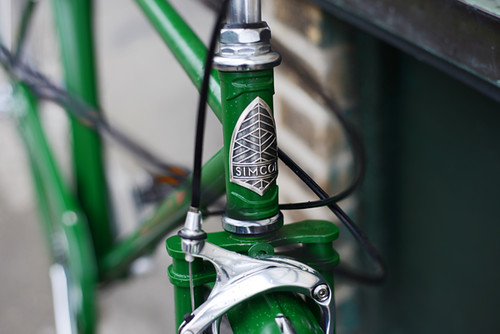 The headbadge is a sort of stylised leaf. I could be reading too much into this, but maybe an homage to its Canadian provenance? The word Simcoe itself - which at first I thought might be a combination of the founders' initials followed by "Co" as in "company," is in fact the name of a town in Ontario. 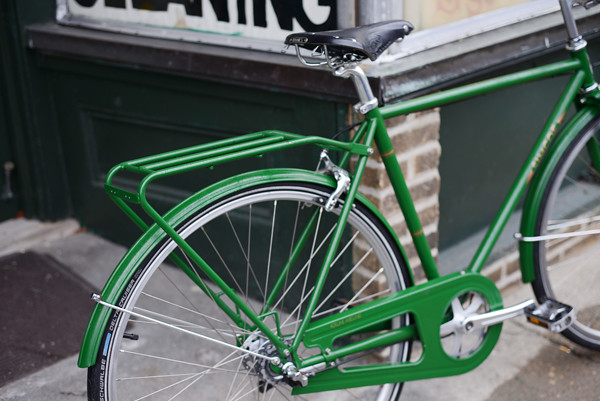 The Roadster's chaincase is one-sided and open at the rear. While not fully enclosed, it allows for easier wheel removal and still keeps most of the chain covered. The rear rack is extra long, 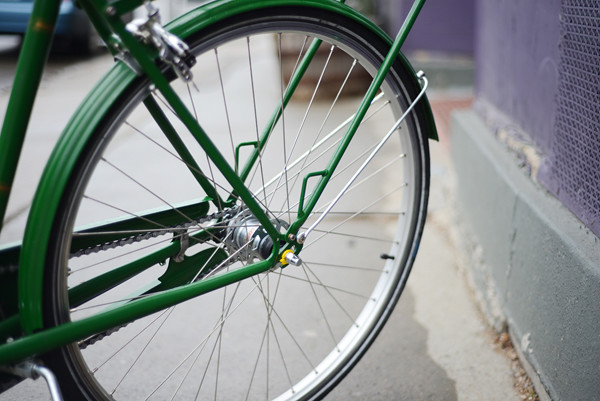 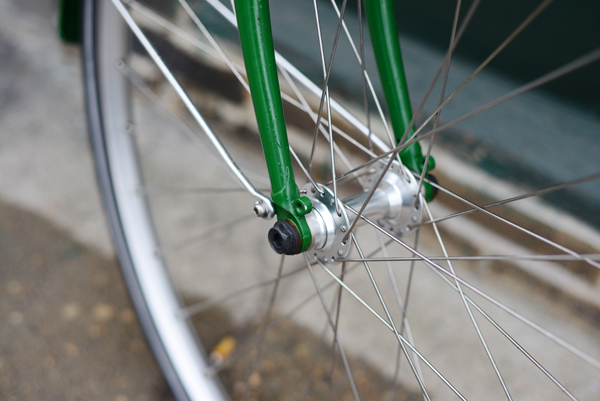 Eyelets at the fork dropouts allow for an optional front rack as well. 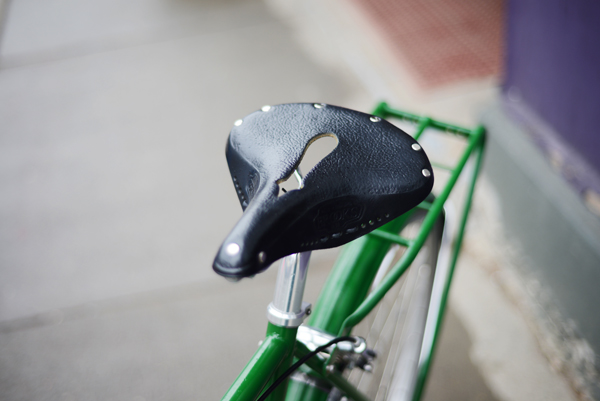 A Brooks B68 saddle comes standard with this bike. The cost for the 3-speed Signature Roadster model as shown is $899. At that price it comes fully equipped for utility cycling, with the notable exception of lighting. 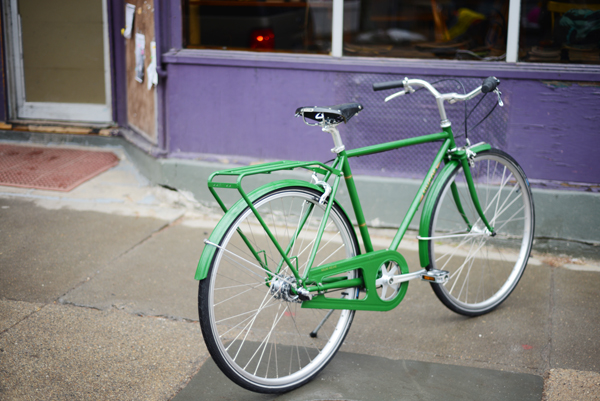 As far as the Simcoe Roadster's looks, I am neutral. Abstracting my dislike of this almost neon shade of kelly green (it's also available in blue and slate gray), the bike comes across to me as rather ordinary, perhaps even made a little awkward by the extra-long rear rack. Were I to see it in a line-up next to a Linus, Papillionnaire, and the like, I don't think it would stand out as a "nicer" bike, despite the stock Brooks saddle. Yet it is priced a step above these. To me, the price difference would be worth it for the feel and ride quality of the Simcoe. But I wonder whether the lack of aesthetic differentiation might be an issue for potential customers. 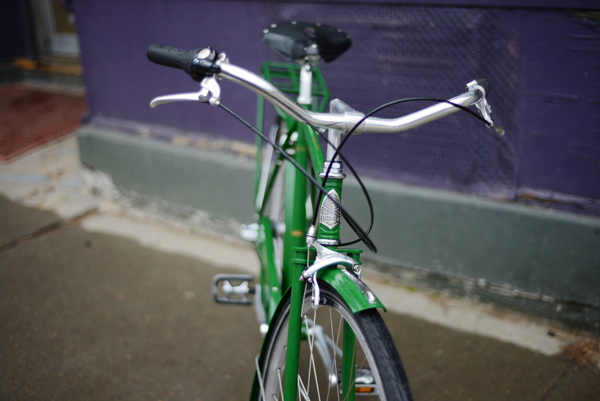 If you are considering Simcoe's Step-Through model, please note that I did not ride that version of the bike. Judging by the pictures, the step-throughs are constructed differently from the diamond frames. I am curious to try one and perhaps some day I will, but for now my feedback applies only to the Roadster.

For a company brand new to bicycle manufacturing, the Simcoe Roadster is an impressive start. As distributors, the guys behind it have had a great deal of experience with both European city bikes and North American customers, and it shows. And it probably didn't hurt that one of the designers learned frame building from Mike Flanigan. If you're in the market for a sub-$1,000 city bike and are chasing that intangible "vintage bike feel" in a modern machine, the Simcoe Signature Roadster is worth a look - but more so, a test ride.
Labels: 3-speed bicycle reviews diamond frame test rides