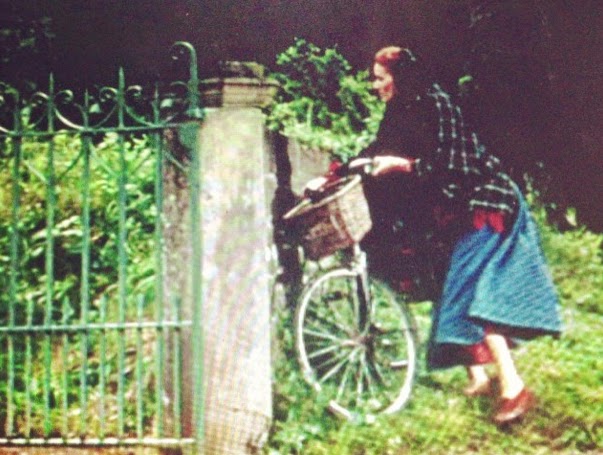 For some time now everyone has been telling me that I absolutely must see the 1952 film The Quiet Man. Apparently it's to do with Ireland, heavy on thatched cottage and bicycle content. And there is a redhead in it! And John Wayne! Oh my. But months passed into years and, philistine that I am, I still hadn't bothered to see the movie. So when I heard folks talking about a road trip to some special release premier of it in County Mayo this weekend, I thought - how perfect! - and decided to go.

Later I read the fine print, and discovered I had in fact signed up for a 300K brevet with Audax Ireland. Needless to say, it was LOLs all around! So... I guess I'll be taking my bike.

What makes me think I can ride a 300K brevet after barely a month of post-winter training, after having failed in my previous attempt at that distance last year, and after never having ridden in a timed event in Ireland before? Probably folly.

But in my defense, the organisers are not entirely blameless.

I give you Exhibit A:


"The Quiet Man is a relatively easy 300km featuring the best scenery in the West of Ireland."

Now, you and I both know that when randonneurs say "easy" what they really mean is "quite difficult indeed, but we like to pretend otherwise." In spite of this, my brain keeps connecting the words "easy" and "best scenery," bypassing logical circuits.

This effect is supplemented by Exhibit B:
this picture!


"Starting and finishing in Westport between Croagh Patrick and Clew Bay, the route takes in such delights as the Delphi Valley, Killary Harbour (where dolphins were spotted on the 2012 event), north Connemara, before travelling through the contrasting landscape of the “Plains of Mayo” and on to the north coast. On the way home, you’ll take in Ballycroy National Park, as well as countless lakes, mountains and salmon filled rivers. With a bit of luck you’ll see the sun set behind Achill or Clew Bay, before returning in time for a meal and a pint in one of Westport’s charming pubs."

Frolicking dolphins? Salmon filled rivers? Contrasting landscapes? The word "plains" with its suggestion of flat terrain? The mention of pubs, making it seem that one is likely to finish this ride before they all close? This is powerful propaganda.

So, what have I done to prepare for the Quiet Man, upon realising it was not a movie screening? Well, I  worked up to a couple of 60 mile rides, followed by a 96 mile ride, followed by a timed no-photos-allowed 120 mile ride with lotsa elevation gain. On days when I wasn't doing those, I did shorter rides involving hill climbs.

I also finally watched The Quiet Man. And okay, at the risk of angering fans, I just didn't find it that good of a film. Aside from the cloying music, the rather bland, I thought, performance from John Wayne, and Maureen O'Hara's over the top shtick as that '50s ideal of the Feisty, Perpetually Indignant Woman who goes around slapping men in the face and getting thrown on the bed for it, I had trouble believing that the main characters were attracted to one another. For all the talk of the great chemistry between Maureen O'Hara and John Wayne, I didn't see it here. No matter. The Quiet Man had some funny scenes, beautiful scenery, and, importantly, bicycles - my favourite being the tandem of the pedantic Protestant clergy couple.

And the Quiet Man 300K? You never know how these things will go. But one thing I can predict for sure: There will be bicycles there as well. It is coming up this weekend, so not much to do now but rest and wait, then pedal, pedal, pedal, pedal, and pedal some more. As I watch Maureen O'Hara's thrashings on the screen, I picture myself at mile 150, in the dark, a hot mess, narrowing my eyes in anger at the fatigue that threatens my honour and hissing "How dare you!" before speeding off to finish the brevet with a flick of disheveled red curls. You know. Or something like that.
Labels: films Ireland randonneuring