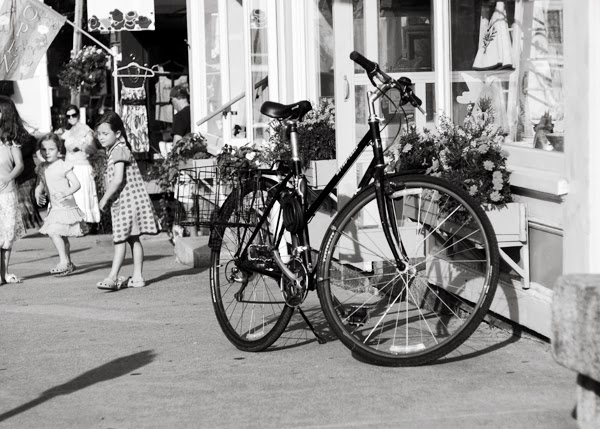 The beach closest to the house is a small and rocky one that all but disappears at high tide. But I know a spot - behind all the rocks, in a little hollowed out nook in the side of the cliff - where I can sit on the wet dark sand, hidden, reading. Well I call it reading. Only half the time I am lying face down, my cheek pressed into the open pages of the book.

Once in a while a noise prompts me to look up. Few people come here, most preferring the main beach down the road. But now I hear the unmistakable sounds of flip-flops.

There are three of them, making their way along rocks half-submerged in water. The man is athletic and agile, with a deep tan and spiky brown hair. Close behind is an equally lean and tanned woman, blond ponytail swinging as she hops from rock to rock. The couple moves with the lightness of teenagers, and only when I catch a glimpse of their faces do I see they must be in their early 50s. They could be professional athletes. Runners maybe.

As I contemplate this, they pause, waiting for the person some distance behind to catch up. It is an elderly female form: soft, hunched-over body, sagging chest, thinning hair, unsteady mincing gait. The mother or aunt of one of them, I decide, and go back to my book.

I see now that she is a girl of around 14, though it is difficult to tell for sure. She stands awkwardly on the uneven rock, her shoulders hunched forward stiffly, hands at her sides, fingers fanned out, slack mouth emitting a low pitched moan.

I feel a jolt to my system that I am instantly ashamed of. But it is the unexpectedness, the contrast of it. The couple's effortless movements and their beautiful, youthful bodies, each stretching out a perfectly formed hand toward their child.

“Angie! Angela” says the man now, trying to get her to look at him rather than down at the water. There is a big gap between the rock she stands on and the next one, and she is terrified to cross. Her moans grow louder. “Angie! Angela.” The man’s tone is even, patient but not exaggeratedly so, almost matter of fact.

When she still does not respond, both the man and woman step down into the water and, in what has the look of a practiced maneuver, pick her up by the upper arms and swiftly move her to the next rock. She is large, and at once so limp and so stiff, it is as if they move a life-sized ragdoll. And then they go on with their trek.

Soon they are gone from my field of vision, but I continue to think of them. Their light, graceful limbs and her heavy, awkward ones, the sun lighting up her sparse wisps of hair.

In my younger years, I could dwell on such a scene indefinitely, crying over it without really knowing why. But now I am better at willing myself to forget, at removing thoughts and images from my mind, almost surgically. Eventually I go back to my book - reading it, then lying face down on it again.

It is not until three days later that I see her. A girl in a halter dress, riding her bike along the tiny main street. Her left foot is missing a sandal. And she is coasting, round shoulders relaxed, head tilted back, short sandy hair ruffled by the breeze. She is squinting into the sun and smiling so broadly, I cannot help but grin back reflexively.

In that moment I recognise her. I look around for the tanned athletic couple, half expecting them to be following on bikes or watching from the sidewalk. I don't see them. But the girl is unmistakably her. The face, the body, the hair, the way her clothing does not sit quite right. It is all there and it is all perfect, in the utter abandon of her posture and smile.
Labels: stories