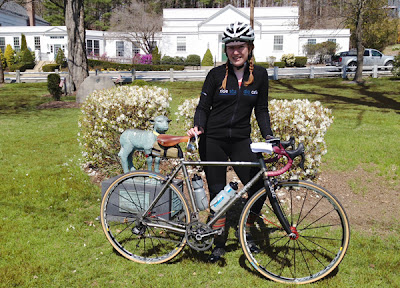 So, did you know that Mary had a little lamb? No, seriously. That there once was an actual girl, named Mary, who kept a diminutive pet sheep? The girl in question (Mary Sawyer, to be precise) lived in Sterling Massachusetts in the 1800s. And according to historical scholars, some time in 1830 she brought her pet lamb to school - an act that caused such mirth among the other children, that a local poet was inspired to immortalise it in verse. On the Sterling Town Green, a statue now stands commemorating the event.

This statue also marks the halfway point and only control stop of the New England Randonneurs Populaire - a timed 107 km ride that heralds the official start of the local brevet season.

"But at least take a picture next to the Lamb!" someone exclaimed when I mentioned there would be no pictures on this ride. A kindly volunteer did the honors. My few lucid memories of the Populaire revolve around the stone rendering of the famous Victorian pet.

Having already done two "Permanents" earlier this month (this one and this one), I hoped the official Populaire would not be anti-climactic. I needn't have worried.

Some notes, while it's all still fresh and I am too tired to feel self-conscious:

I must remember that rides with similar overall elevation gain can be very different. The climbing on this one was intense and draining, even though the elevation gain (3813ft over 68 miles) was the same as in the previous (easier!) 100Ks I did this year.

But perhaps much of that had to do with how I did this ride. Straight through, minimal stopping, really pushing myself to get it done. Particularly on the return leg, I just basically raced through the course, inasmuch as I am capable of such a thing. I do not know what possessed me to do it this way; I certainly did not have to as there was plenty of time left before the cutoff. But it felt in the spirit of the event: Everyone seemed focused on making good time. I finished well (for me), certainly better than expected. But it was tough. At some point, everything was a blur, attempts at conversations became babbling nonsense.

For some of the time I rode in a group. This proved a novel experience compared to previous group riding. While the group's average speed was similar to my own, their rhythm did not match mine - a situation I found extremely difficult to deal with. I tried a few times to cycle ahead of the group, so as to go at my own pace. This did not work, as they'd always catch me. Falling behind did not work either, as I'd eventually catch up, yet again be unable to pass them. I seemed destined to ride in this group and adapt to its rhythm; it was as if a magnetic field held us together!

The start of the Boston brevets is in a middle-of-nowhere location - an airforce base some distance from my house. By the time I got home, I had ridden 105 miles, and felt every single one of them. A Century is not quite a casual distance for me, yet. This is disappointing.

Because of the Boston Marathon bombings and their aftermath, the Populaire took place one week later than initially planned. The 200K brevet is next Saturday, not leaving much time for further training. Considering how I feel after this ride, I am not sure it is a good idea to embark on the 200K so soon. But I will see how I feel mid-week.

Finally... Despite this depriving me of photo opportunities, it felt good to put in an effort and try to make decent time. By mid day it was all over, and afterward I felt oddly over-emotional. I wasn't happy, or sad, or proud or frustrated exactly. Rather, it was as if so many miles and so much intensity packed in a fairly short time was too much for my system to cope with. But in a good way... I think.

My thanks to the New England Randonneurs for putting on this event, and to the wonderful volunteers who made it happen. I hope to see you again this summer.
Labels: 100 miles randonneuring ride reports