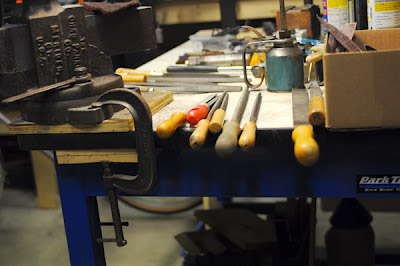 Be it food, furniture, clothing or bicycles, there is nothing quite like getting things made by people we know and trust. I am lucky to live in a pocket of the US that has a long history of an independent bicycle industry, and luckier still to interact with some of its members. On the occasion of Independence Day, I would like to feature these people here and invite you to have a look at their work. When I first met Mike Flanigan of ANT, he was introduced to me as "the godfather of the transportation cycling revolution." Long before Dutch bikes and retrofitted Porteurs began gracing the streets of trendy American cities, Mike was making sturdy roadsters and cargo bikes for his customers under the slogan "Not sport, transport." He made custom loop frames at a time when no other framebuilder saw it as worth their while to offer step-through frames for women. He educated the new generation of local frame builders about the value of transportation bicycles and continues to share his knowledge with them generously. Today Mike also offers framebuilding classes, which have become extremely popular. Every year he donates a cargo bike that is raffled off at the Redbones Bike Party and Benefit in Somerville. There are other builders now making transport bicycles and plenty of mainstream manufacturers as well. But there is still nothing quite like an original ANT bike. Of course the new generation makes it look so easy. It's not for nothing that Geekhouse Bikes founder Marty Walsh is known as "party Marty" - combining work and fun is their MO. Or rather, they do not see a distinction. Making colourful bikes that range from track to touring to townie, the boys of Geekhouse work tirelessly on their unique frames and have inhouse powdercoating facilities to boot. Hip segmented forks? Bottle cage braze-ons shaped like lightning bolts? Sparkly powdercoat? They are the ones to see about that. Geekhouse also connect with the local community, collaborating with their peers and encouraging innovation. Most recently they've leased a large space to be developed and shared by local artisans, which is looking more and more exciting each time I visit. Though still a relative newcomer to the framebuilders' scene, Bryan Hollingsworth of Royal H. Cycles can make pretty much anything, I am convinced of that now. A carbon fiber fabricator at Seven Cycles, his true passion is lugged steel and he has been building frames under his own name for the past three years. I was one of his first customers and watching Bryan work was what inspired my own interest in frame design. After successfully collaborating on a one-off randonneur project last year, this summer we are taking it up a notch and trying to develop a do-it-all mixte model. Another Seven Cycles veteran, Mike Salvatore of the so-called Sketchy Cycles is the framebuilders' framebuilder and a man of mystery. There is no website. There is no order process. There is no price list. Working by candlelight in the company of his enormous pet rabbit, Mike builds frames mostly for friends and only when the mood strikes him. But the deceptively modest-looking bikes are known to have magical properties. Those who own a Sketchy - and it's quickly becoming a cult of sorts - only smile mysteriously when asked what makes these bikes so special. Will the rest of us ever know? We can only dream. Speaking of dreams, I certainly felt as if I was in the midst of one when I stumbled unexpectedly upon Cantabrigian Mechanics - the shop of Ricky DeFrancisco - earlier this year. What do they make? That is a little difficult to describe, because the answer is "everything." In a sense they are ghost builders - making bicycle frames and parts of frames, and also objects that have nothing to do with bicycles at all, for manufacturers whose names might be quite familiar to you. Intrigued? It may be possible to satisfy our curiosity soon, as Cantabrigian Mechanics are now developing a house brand called Commonwealth Cycles. The art of fillet brazing is on the rise in Boston and I am infatuated with the fledgling work of Nao Tomii of Tomii Cycles - a sculptor who, after years of learning the trade, has recently become a full time framebuilder. Nao's bicycles look effortless, liquid and floaty as he combines technical precision with an artist's eye. I will have more pictures of his work featured here soon, and this is surely a builder to watch closely. Another new fillet brazer of note is Armando Quiros of Quiros Custom Frames. A favourite of the fixie-loving crowd, Armando has won awards for his track bike builds and admiration for his sharp urban commuters. I met the legendary Christopher Igleheart at a local bicycle show a year ago and was lucky enough to test ride a bike of his. Making many kinds of bicycles, from mountain to randonneuring to city, Igleheart is about lightweight steel, long-distance comfort, and quirky touches. His experience in the industry is vast and his customers rave about his bicycles' ride quality. An old school local favourite. Seven Cycles are the folks who turned me on to titanium and opened my mind to an aesthetic I was not predisposed to like. There are not many independent bicycle factories left in the US, and I feel incredibly lucky to live just 6 miles from one, to be able to visit it, to know most of the people who work there. Seven Cycles sponsor many local events, as well as several cycling teams. I am still waiting for them to come out with a belt-drive titanium loop frame... There are other local builders whom I haven't had the honour to visit and photograph, but would like to mention: Peter Mooney, Firefly, Circle A, Chapman Cycles, Ted Wojcik, Independent Fabrications, Parlee, JP Weigle. If there are others I have omitted, please remind me and I will include them. 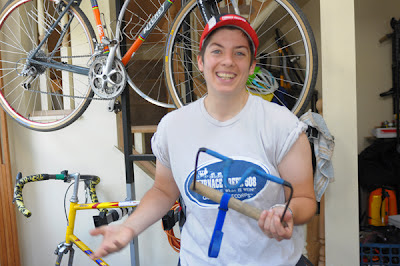 In stark contrast to the framebuilders, as far as accessory makers we admittedly have a shortage. But Emily O'Brien's famous Dill Pickle Bags - not to mention her personality and fixed gear randonneuring adventures - certainly help make up for this. I made Emily's acquaintance recently and have one of her remarkable bags on loan, which I am now reluctant to return. 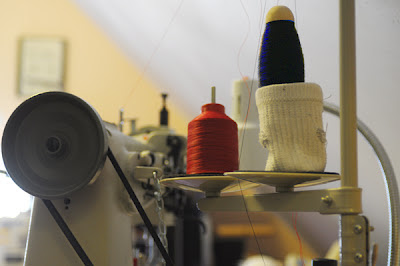 Thank you for reading along. I admit that I am proud of our local bicycle industry, and I try to do my best to feature its members here. What is it like in your area? Please feel free to mention your favourite frame builders, component manufacturers, and accessory makers, and post links so that readers might visit them. Enjoy your 4th of July weekend!
Labels: Boston framebuilding holidays