There has been an increasing trend for "cross-pollination" lately between bicycle makers that specialise in transportation vs sport. Every mainstream manufacturer at Interbike seemed to have a step-through city bike on display, and custom builders known for catering to the racing crowd have come out with commuter models as well (the Independent Fabrications Caffeine Racer being one extreme example worth having a glance at!).  But it would be inaccurate to suggest that the industry is moving away from roadcycling and toward transportation, because the reverse is happening also. Pashley stunned Interbike visitors by displaying a lightweight Clubman model with a carbon fiber fork and threadless stem. Rivendell caved to its speed-loving customers and introduced the Roadeo earlier this year. Velorbis sent round press releases about its new line of "sport bikes." Velo Orange published a blog post entitled "Why I race and why you should too" (could a cyclocross bike be in the works?). ANT is considering launching a pure road-race model after experimenting with the Fire ANT line. While bicycle commuting is more popular than ever, so are racing, touring, club rides and bicycle camping. And what seems to be happening is that manufacturers are "diversifying" their offerings to cater to the general rise of interest in cycling of all types. 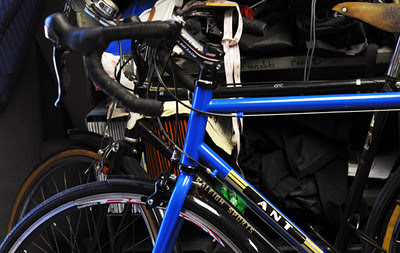 The trend is exciting to observe, but one question often raised is that of whether the other side can ever really "get it." Can a manufacturer specialising in racing bikes make a comfortable and practical transportation bike with a long wheelbase and relaxed geometry? Can a transport bike manufacturer let go of their "weight does not matter" and "fenders are a must" principles and make a competitive performance-oriented machine? Some would say no. But then remember manufacturers such as Raleigh and Gazelle, whose production of iconic road and transport bikes in decades past would suggest otherwise. Ultimately we will have to wait and see. This could get interesting.
Labels: bicycle industry bike shows Interbike