The Drop Frame Bicycle - The 'Queen of Safeties' Returns 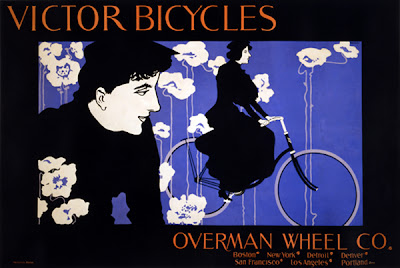 [image via Atomic Antiques]
Browsing through my favourite vintage bicycle posters, I've always noticed something unusual about the ones of the Boston-based Overman Wheel Co.: The lady's bicycle appeared to have only a single curved tube - rather than a down tube and a top tube, like the vintage loop frames we are accustomed to seeing. Could this be artistic license for the sake of making the graphics simpler, or did bicycles like this really exist? Several times I had tried to investigate, until finally I found what I was looking for: 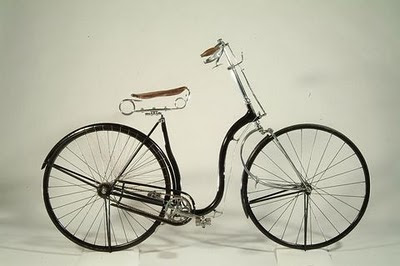 [image via the Smithsonian Institution]
The Overman Wheel Co. "Victoria" - a "drop frame woman's safety bicycle," according to the Smithsonian. It had 28" wheels, rod-like brakes, what appears to be some sort of suspension contraption on the fork, an enormous saddle, high handlebars, and a chainguard. Finally, confirmation that the bicycle hinted at in the posters was a real model. And for a machine that was manufactured in 1889, the Victoria looks awfully familiar...

[image via Bikes for the Rest of Us]
And you thought this design was funky and new, eh? Bicycles in this style have been popping up in Europe with increasing frequency over the past 5 years, and have recently made their way to the US as well: A single, oversized curved tube connecting the head tube and the seat tube - sometimes with reinforcements and sometimes without, combined with a suspension fork, suspension seat post, plush saddle and high handlebars.

[image via Tom Coghlan]
The reasoning behind the single curved tube design, is that it allows for extra low step-over height, making the bicycle especially accessible for those who wear long, loose clothing, as well as for those who have balancing problems when mounting even the standard step-through frames. And the funny thing is, that while everyone agrees that the low step-over is beneficial, many also complain about how "ugly and modern" it is. I wonder how many are aware that the "drop frame" design is in fact 120 years old! 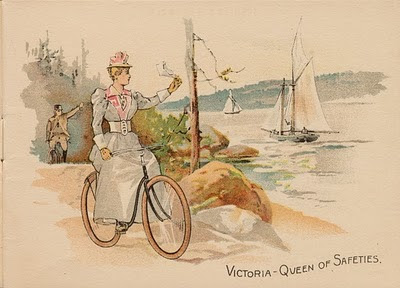 [image via The Daily Postcard]


As I've mentioned here earlier, I think that any design that makes the bicycle more accessible to those who would otherwise be intimidated by it, is a good design. With its super-low step-over, the drop frame is inviting and safe-looking - no wonder the original was described as "the queen of safeties". Having ridden a few modern versions of these bikes in Austria a couple of years ago, I found them easy to deal with. But I wish there was a way to make them look and feel a little nicer. The suspension fork on the modern bikes is probably there because the aluminum frame makes them painful to ride over bumps. But the suspension has the side-effect of creating a "bouncy" feeling that  does not give the cyclist optimal control of the bicycle. I wonder how the original Overman bicycles were made: Were the frames lugged? Was the ride comfortable? I suppose we will never truly know how these compared to today's bikes.
I think the modern reincarnation of the drop frame is a great idea in principle, if only it could be made more elegant. What do you think of the vintage and modern versions? - could you benefit from the low step-over, or do you find the regular step-through designs sufficient?
Labels: loop frame skirt vintage