All Happy Bicycles Are Alike?... According to the Anna Karenina principle, it might be said that all happy bicycles are alike and every unhappy bicycle is unhappy in its own way. Jacqueline - a vintage Steyr Waffenrad that has become my "Austrian bike" - is happy. She has a relationship with a human who loves her. She has an idyllic work commute along the Danube Canal. She has beautiful heirloom jewelry in silver and gold. She feels useful and fulfilled, responsible for the safety and well-being of the people in her life. 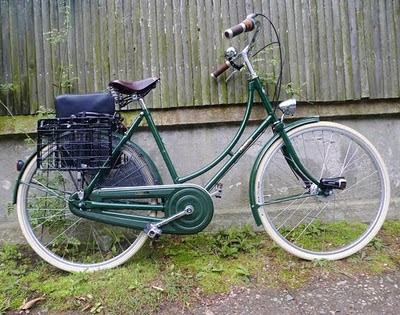 Back in Boston, Eustacia (my Pashley Princess) has recently reached a similar state of happiness - interestingly, after the addition of some of the same components, such as the rear folding baskets and the speedy cream tires. It seems that bicycle happiness is indeed, at least to some extent, formulaic. When all the factors come together just right, it works. When something is off, it doesn't. This brings the question of whether happy bicycles inspire being written about. When everything feels just right, there is nothing to say really. The sun is shining, my bicycle is running smoothly, my folding basket fits my briefcase snugly, my shoes don't slip on the pedals, the route to work is safe and beautiful, and it took me less time to arrive at my office than had I taken the subway. That pretty much describes my commute this morning, and it sounds rather uninteresting.

As I said to Anna from Cycling is Good for You the other evening - If I lived in Vienna and had Jacqueline to begin with, I doubt that I would have ever started a cycling blog despite loving bicycles. Maybe an image gallery, but not a blog. There would have been nothing to discuss.

After all, most posts are written about challenges, questions, restorations, the search for new components or better routes, and so on. But is bicycle happiness newsworthy?
Labels: Eustacia Vye Jacqueline loop frame Pashley Vienna