The paint on my mixte is finished and Circle A. has emailed me some pictures - so allow me to share my ecstasy. And since I can't just say "yippy, isn't this pretty?" over and over, I will attempt to maintain a coherent narrative. What I feel is really special about the frame Royal H. made for me - aside from it being a lugged mixte with twin lateral stays in an age when these are no longer made - are all the little details that Bryan added. 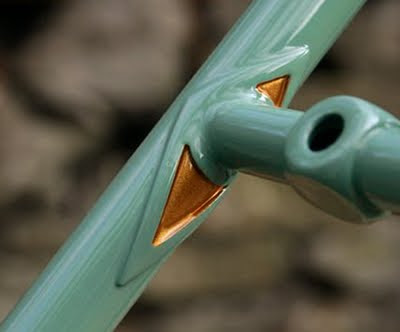 Behold the lugged brake bridge (is that the correct term?) 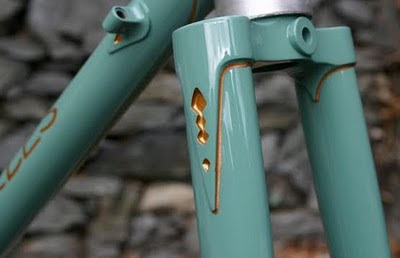 ...and the custom cut-outs on the flat-top fork crown (which accommodates a 35mm tire, with fenders!) 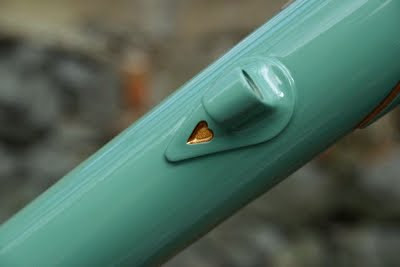 ...and little braze-ons all over with even littler cut-outs 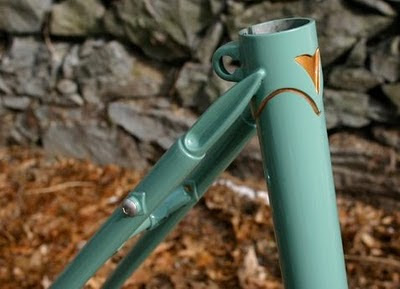 ...and these unusual "bullet"-style rear stay connectors that add visual interest to the seat cluster and (to me at least) communicate the idea of speed 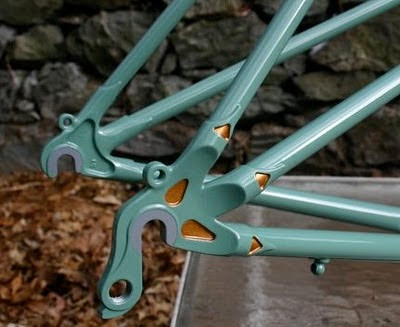 ...and the uniquest, biggest deal of all: the custom drop-out sockets. For those to whom this picture means nothing, let me explain: See those three adorable little lugged thingies? Well, that adorableness is not standard on this part of a bicycle. Normally, this area looks like this. See how the three stays on my Motobecane transition directly to the dropouts without the cute sockets? Not as nice! Furthermore, while a frame maker can buy these sockets for diamond frame bicycles (which have only 2 stays that need to go into the sockets), the part simply does not exist in a mixte version, which would require an extra socket to accommodate the third stay. So what did Bryan do? He made the part himself out of several existing sockets! Bravo, non? Seriously, I can't believe he did this. We are pretty sure there is no other mixte frame out there with socket dropouts. 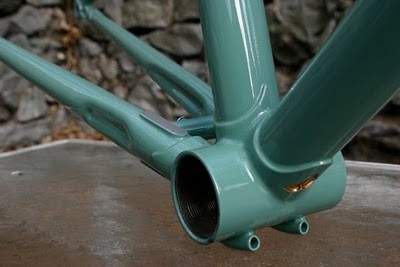 Finally, for those who enjoy seeing elegant solutions to practical problems, I present this. What is this, you ask? It is Bryan's beautiful alternative to a traditional kickstand plate. When we were discussing the frame build, I told him right away that I planned to put a kickstand on this bicycle and would like a kickstand plate. Bryan agreed that this was necessary, as bolting a kickstand directly to the frame can ruin the paint and dent the tubes. However, he confessed to me that he did not really care for the look of kickstand plates (read about them here), and asked whether I would trust him to find an alternative solution. 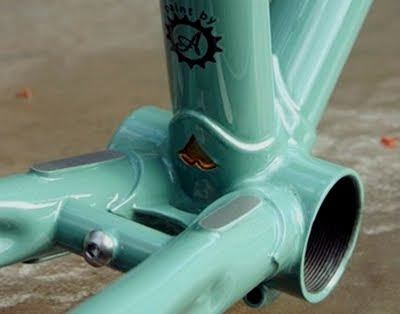 The alternative solution he came up with was this: two subtle stainless steel platforms directly on the chainstays. Not only are they harmoniously incorporated into the frame design, but they are unpainted stainless steel - eliminating the danger of any paint being chipped by the kickstand setup. Ah the genius of it. 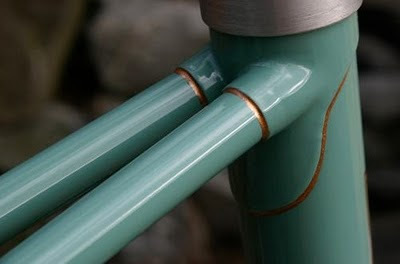 Here are some more details of the frame, like this mixte upper head lug, split to accommodate the twin stays. On my Motobecane the part where the stays come out is not lugged, so this is really a visual feast for me - as is everything about this frame really. 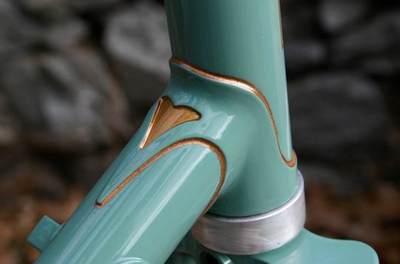 Well, I get emotionally exhausted if I look at these pictures for too long, so I better end here. Get a custom frame from Royal H. Cycles - they are glorious!
Labels: framebuilding lugs mixte Royal H Royal H. Mixte