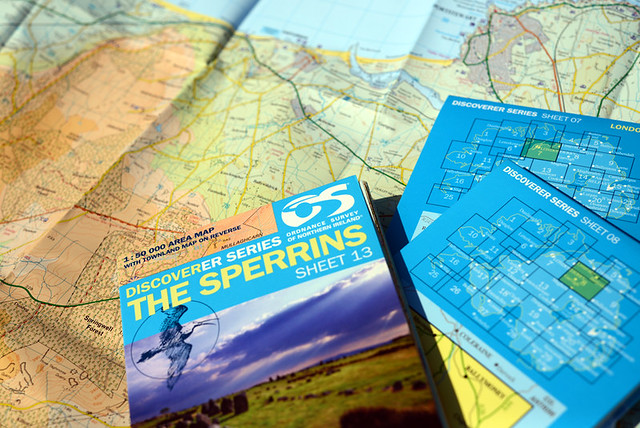 A couple of months ago I decided it would be nice to get ahold of some Ordnance Survey maps, and I set out on a quest to purchase them. Like most things here, this was not without its share of adventure. At the local book shop the salesman looked at me like I had two heads. "Ach no," he said, "you're best to get them online." So I tried online, and sure enough there's a special government website that sells them and it all seemed straightforward enough …until their payment system deemed my debit card suspicious and then not only could I not order the maps, but a fraud alert was activated and I could not use my bank card for days.

I was just about to give up, when who should I see, whilst hanging about the local airfield, but a pilot unfurling a delicious-looking map, full of all manner of dotted lines and squiggles, decidedly ordnance-surveyish. Eying the colourful paper with envy, I told him of my unsuccessful attempts to score one of my own. He smiled with some satisfaction, as if to say "of course this is what happens when you try to buy something in Northern Ireland without consulting an expert first." Then he revealed the name of the book shop where the maps could be got locally.

The very next day I cycled there. The salesman nodded at my request so matter-of-factly you would think Ordnance Survey maps were the most natural thing in the world to ask for. I followed him around the store to a cavernous section in the back where he stopped beside a dauntingly overstuffed shelving unit. A subtle flicker of gratification illuminated his face when I looked duly impressed, and I wondered how often he got the opportunity to lead someone to this tremendous cache. 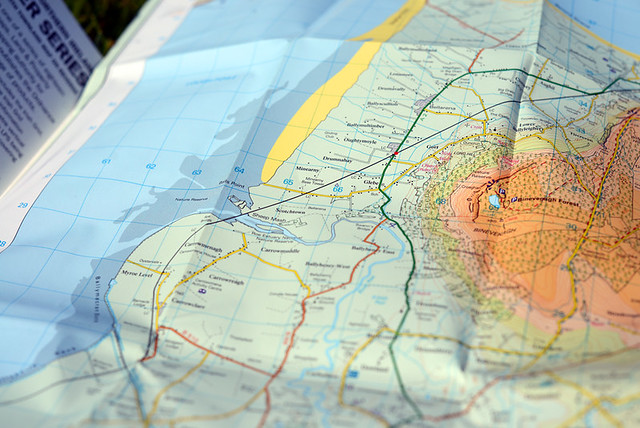 Done to a scale of 1:50,000, the maps were numerous, each covering a tiny section of the region. I could hardly decide which I wanted as they were all so lovely and shiny and the covers featured alluring photos, one more scenic than the next.

In the end I bought four maps that covered the areas closest to me. Clutching them to my chest like a bouquet of flowers, I carried them out into the town square. Then I spread them out on the stone bench and let out a sigh of happiness. What was it about these things that caused such emotional stirring? I had used maps before, for heaven's sake. But in these, there was something particularly enchanting.

In the UK and Ireland, Ordnance Survey agencies put out maps beloved by walkers and cyclists for the level of detail and topographical information they provide. I wanted a set for the purpose of finding local trails and hidden right of ways to use as shortcuts when cycling through the region. Perhaps I could even piece together some local unpaved routes.

My impression from stumbling onto such routes organically so far, had been that unpaved stretches existed, but were disjointed. Having studied the maps, this has proven to be more or less accurate. Unfortunately there is no cohesive network of trails running through the area where I live. But there are lots of individual fragments here and there - considerably more than I had thought. And in many cases they can be combined with quiet back roads to make for a cycling experience that's scandalously scenic and very nearly traffic-free. Discovering the local trails and rights of way also provides access to many interesting locations and landmarks that cannot be reached otherwise. 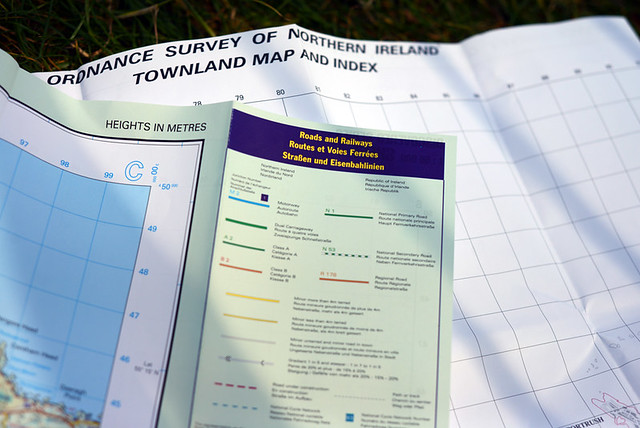 In a practical sense, this has certainly been useful. But the maps have affected me beyond that.  Profoundly altering the way I see the landscape, they have deepened and texturised it. It is as if the information gleaned from their dense markings has integrated with my sensory experiences to form a rich hologram, so that when I look at a stretch of land in front of me it has a luminous transparency that can be activated at will. Not only am I aware of all the backroads, and of the trails beyond those backroads, and of the hidden nooks and crannies beyond those trails, but I am also aware of how they all connect, interact, diverge. The through-ways and the dead ends. The lands that back up onto each other without quite touching. The woods with clearings and without. Bogs that can be criss-crossed and bogs that cannot. Paths rendered invisible by tall wheat. Shallow ledges that make for secret river crossings. Remnants of stone walls, buried under a crust of rotten leaves, that can be used as directional guides. Beyond and within what's in front of me, there are layers upon layers.

As I pedal through my surroundings, neither the distances nor the views have changed, and the textures beneath my wheels are familiar. Yet there is an unprecedented newness to it; the fluttering secret excitement of having gained access to a new dimension.
Labels: stories unpaved