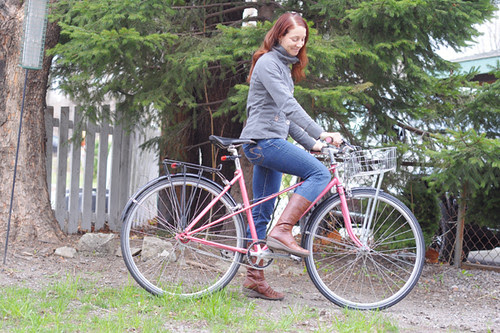 When I look back at 2012 (I know it's been a while, but I needed time to take it all in!) I remember it as the year when I started to notice a lot of positive changes in the cycling world around me. Positive changes not only in the widening selection of transport bikes available in local shops and not only in the public perception of bicycling, but also in the increasing amount of rapport, cooperation and even overlap between different "camps" of bicyclists. And I think this latter point is just as important as the others. We cyclists can be tribal and divisive; we can be each other's harshest, cruelest critics. But if we insist on identifying within rigid parameters and lashing out against each other's choice of bike, attire, and riding style, how can we hope for positive changes for cyclists as a group?

When my cycling club, the Ride Studio Cafe, began to blur the lines between the randonneuring and racing cultures, I remember it felt as if a paradigm shift was taking place. They threw a big party, where cyclists of different stripes interacted with each other with a degree of enthusiasm that showed a genuine eagerness. Dynamo lighting, racks, and wool were discussed. Unexpected common interests were found. It was truly an exciting thing to be witnessing.

At this same party, I finally met Maureen Bruno Roy, a Massachusetts-based professional cyclocross racer. In her off time Mo leads a regular life, and part of that regular life involves riding her pink mixte for transportation. For me, seeing Mo so happy and casual on her city bike was an encouraging moment: I had not encountered an athlete-cyclist outside of Europe before who saw value and usefulness in such bicycles. But to Mo the value is pretty clear, and she credits her attitude to her time racing in Belgium. "There were these Dutch bikes, and I rode them to get around when I wasn't racing; it was great!"

Around the same time, a local man named Jeff Palter got himself a Brompton folding bike and began commuting on it, posting excitedly on Twitter about how much he enjoyed that. If you're outside New England that name might not mean anything to you, but Mr. Palter happens to be the CEO of the Northeast Velodrome and the owner of Cycle Loft - one of the biggest roadie shops around. CycleLoft is also the main sponsor of the Northeast Bicycle Club - the largest local racing club and the very club that offers the "infamous" paceline rides that so divided my readership two summers ago. Until recently, it would have been difficult to imagine anyone associated with this camp entertaining the idea of riding around on anything but a racing bike with a backpack. I was more than a little surprised when Jeff approached me about sponsorship, explaining that CycleLoft was expanding into the city bike market.

"Looks like the war is over," said a local cyclist when I shared this news with her. I guess sometimes, with all the insults flung about, it can indeed feel like a war - especially when some are described as "riding tanks" and others as being "weekend warriors." With a chuckle, I pictured an army of speeding Cervelos clashing with an army of menacingly rolling Workcycles (incidentally - a Dutch bike company founded by an American, who got his start at Fat City).

Some time in December, I was approached by Bicycling Magazine and invited to write a weekly online column about "city bikes and gear." I was initially skeptical about what they had in mind, but it seemed pretty straightforward: They wanted to expand their coverage beyond racing, to encourage people to commute by bike, introducing them to a variety of bikes and accessories for the purpose. I agreed to write the column. It's a short-term contract and I may not be the one doing it in the long run, but I hope to give it a running start. Or rather, a re-start: Historically, such coverage is not new for Bicycling. A 1978 copy I found of the magazine includes articles such as "Choosing a Three-Speed Commuting Bike" and "Road Test: the Bickerton Folding Bicycle." These things are cyclical. Hopefully the current cycle, with its interest in transportation and city bikes, will be around for a while.

A few days ago I read a story in the New York Times about a man who, a couple of times a week, commutes from the suburbs outside New York City to his office in Manhattan on his racing bike. It's a 40 mile ride and he uses the milage for training. He does it year round, sometimes in snow. I thought it was a cool story, especially after the cyclist himself provided additional details on Velocipede Salon. Then today I read a story in Atlantic Cities in response to it, about ordinary New Yorkers commuting. The author mentions that some readers criticised the NYT piece for "alienating [ordinary people] who might want to ride to work," but I am glad the author herself did not go that route. Instead she gave examples of some interesting New Yorkers who ride and urged cyclists to unite in promoting their shared interests.

For those of us who have been cycling in major North American cities over the past few years, it is hard not to notice that things are changing. Now more than ever, I feel there is room for everyone who loves to be on a bike to promote their style of riding without criticising others in the process. Whether 4 miles or 40, whether in a business suit or a skin suit, whether on a cheap or expensive bike, bottom line is: It's all positively biketastic. The more we understand that, the better off we will be.
Labels: bicycle industry social commentary transport transportation options urban cycling