How Slow Can You Go? 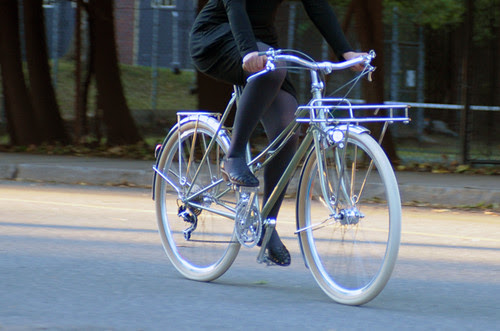 Perhaps because of its longstanding association with racing, we tend to think of cycling skills and experience in terms of being able to go fast. But in fact it is going slow - and I mean really slow - walking pace slow - that is the real challenge.

When I first began riding a bike as an adult, I could not keep the bicycle upright at super-slow speeds. I remember that the steering was difficult to control; I'd end up losing my balance and having to stop. Even after a couple of years of cycling, I found it easier to maintain a speed of 20mph than to maintain a speed of 2mph. But gradually I did get the hang of it, and today I am able to ride at a snail's pace with no trouble at all.

Looking back on this, I would say that slow cycling is one of the most useful bicycling skills I have picked up so far. Here are just some of the practical applications I've noticed over the years:

Wobble-free starting
When I talk to novices about cycling for transportation, a common theme that comes up is the fear of swerving into traffic when starting from a stop at a light. You can see it in the city: When some riders push off from a stop, the front end of their bike will wobble before they gain sufficient momentum to proceed in a straight line. Now, some bikes are easier to balance at slow speeds than others, but with sufficient skill even a twitchy bike can be ridden at walking speed wobble-free, eliminating this anxiety.

Navigating traffic
Riding in the city can be all about stop and go traffic. Being able to cycle slowly while maintaining full control of the bike makes this easier to handle, allowing the cyclist to maintain momentum and to travel more efficiently. Particularly useful is what I think of as "hovering." This is a practice that is somewhere between trackstanding and riding at walking pace. It comes in handy when inching your way forward in a line of stopped cars, changing lanes in dense traffic, waiting to turn left at an intersection, or proceeding in ambiguous right of way situations. It is much easier to both show your intent and accelerate from a position of hovering than it is from a stopped position.

Safe MUP sharing
It used to drive me nuts to ride on crowded mixed use paths. Finding it stressful to navigate around hordes of unpredictable pedestrians, I would simply avoid MUPs during peak hours. But the greenways around here are quite scenic and can be relaxing if riding slowly is not an issue. The same "hovering" skill I find useful in road traffic works just as well for meandering amidst joggers and dog walkers.

Riding on dirt and uneven surfaces
Cycling through muddy, rocky and otherwise challenging terrain can reduce a bike's speed considerably. Yet keeping your balance and being able to steer the bike precisely is more important than ever in those conditions. My new-found enjoyment of unpaved riding has much to do with improved slow cycling skills.

Thinking back to how I finally learned all of this, two distinct experiences come to mind. First, riding fixed gear. I remember vividly how the fixed drivetrain made me feel dramatically more in control of the bike at slow speeds. No one was there to instruct me; it was as if the bike itself was teaching me. And after getting my body used to balancing on the fixed bike that way, some of that eventually transferred over to freewheel bikes.

But the real change was a result of instructional paceline rides. These rides taught me a number of useful techniques, including how to maintain continuous pedaling and consistent cadence regardless of speed. To ride slowly, we were instructed to switch into a low gear while pedaling and feathering the brakes, instead of coasting. This taught me to maneuver the bike smoothly, to control my speed with precision, and to stay stable even when moving at a crawl. Somehow pedaling made all of this easier and reprogrammed my body to balance with the bike. Almost immediately, I saw major improvements in my everyday bike handling skills.

If fixed gear bikes and paceline rides are not for you, one thing you could try is this: When out riding, pay attention to your pedaling. To slow down, try switching into a low gear while pedaling continuously, instead of coasting while pedaling in a high gear occasionally. To slow down even more, feather the brakes while continuing to pedal. Try to go slower and slower using this technique. Gradually your body will learn to maneuver the bike at slow speeds, whether pedaling or coasting. Learning to ride slowly transformed me as a cyclist; it is a skill I highly recommend picking up.
Labels: beginners technique