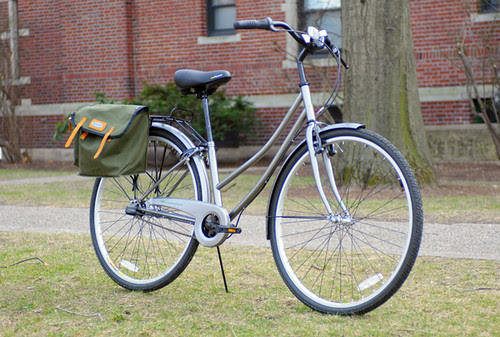 If anybody out there has been reading this blog from the beginning, you know my fondness for the KHS Manhattan Green. A simple, inexpensive steel 3-speed, the KHS Green is the bike that got me back into cycling after a 12 year hiatus. For months I had been visiting local bike shops, but in 2008/2009 there was not much choice out there. The KHS Green was the first bike that I felt comfortable riding. I rented it from Cambridge Bicycle, rode around Boston, and experienced the born-again moment that led to this blog. Ultimately I did not buy this particular bike, because I wanted something with more features and fell in love with lugs. But the happy memories of its simple ridability remained with me, and it is the bike I suggest to anyone who tells me they have a tiny budget. At the moment the KHS Green retails at $365. For that price you get: 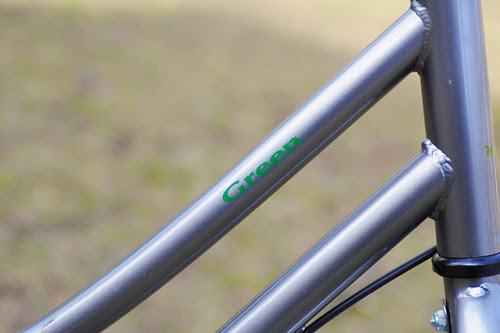 a welded steel loop frame, made in China, size 14" or 17" in subdued black or silver colour schemes, 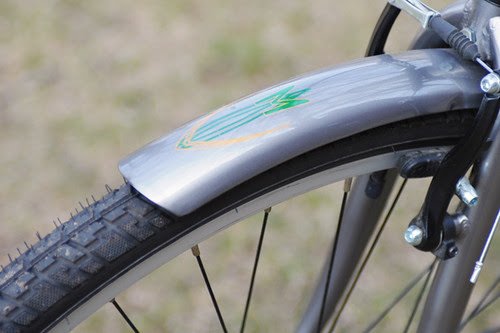 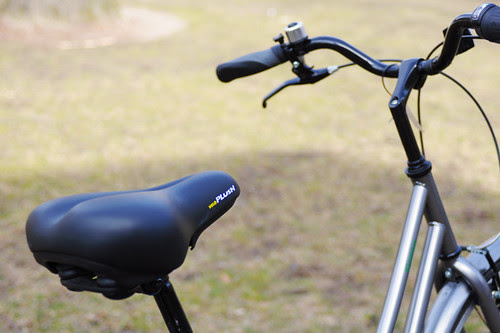 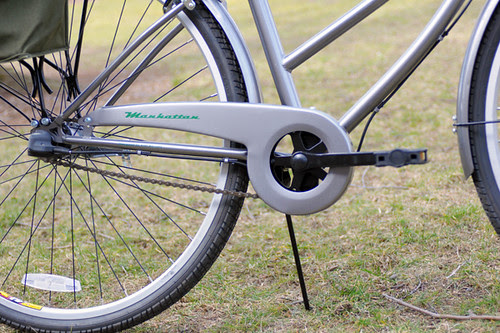 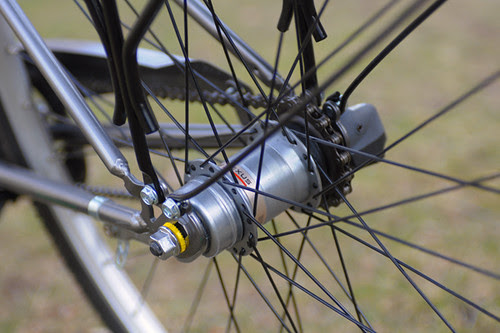 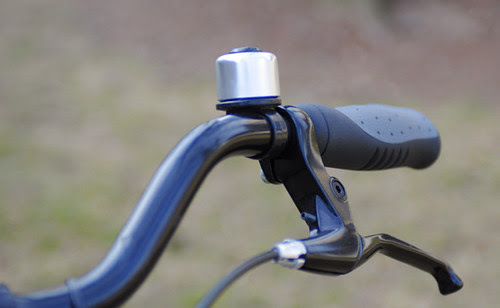 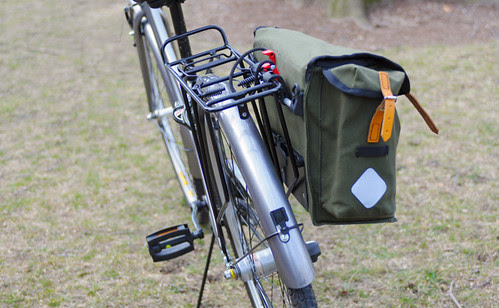 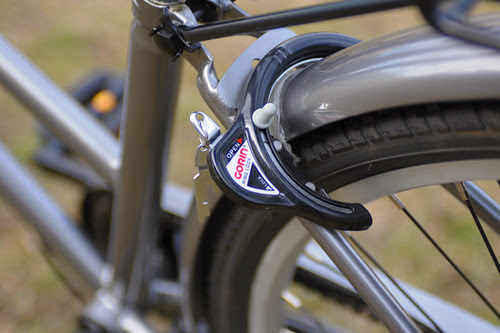 It is my understanding that Cambridge Bicycle contributed to the design of the KHS Green, and that the New England based distributor was instrumental in these bicycles coming to exist as well. Maybe that is why there are so many of them in the Boston area (though this begs the question why it has "Manhattan" in the name...). 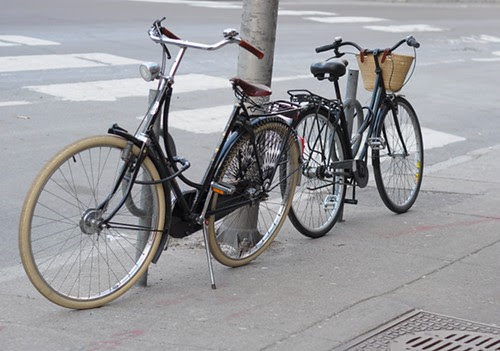 KHS Green bikes are so ubiquitous in my neighborhood in fact, that I have made a game of snapping pictures of them. They are usually black, and are left parked overnight on the streets with abandon. Here is one locked up next to my Gazelle. And here's another. And another. A friend of mine has one. A neighbor has one. I've even seen two seemingly unrelated ones locked up to the same rack at the grocery store. The ones from a few years back are a bit rusty, sure. But they appear to be fully functional and well-used. 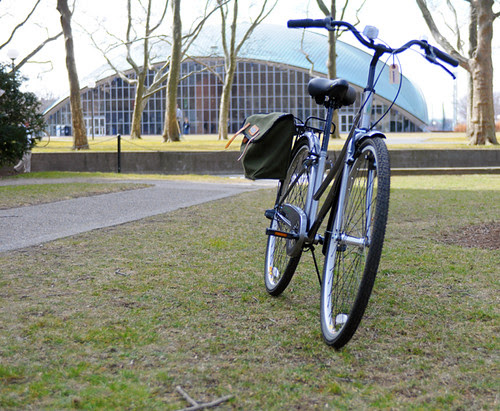 It's been nearly 3 years since I rode a KHS Green, so I thought it would be useful to refresh my memory and see what I think of the bike now. After all, I've gained considerably more cycling experience and have tried many different bicycles in all price ranges.

I rode my own bike to Cambridge Bicycles, left it with them, and then took the Green around town on some of my typical urban routes. Clipping my pannier to the rear rack was easy, and I carried all my stuff just like when riding my own bike. 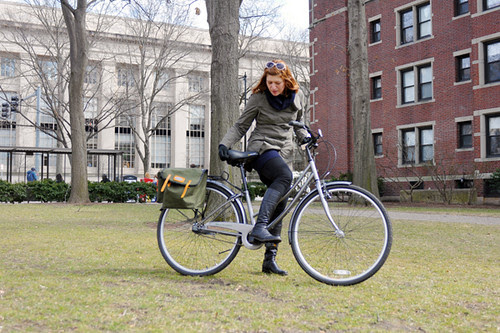 The bike I rode was quite small, because they only had the 14" size in stock, but it was ridable with the saddle all the way up. There was no toe overlap for me on the 14" frame - but it was very close and whether you experience it may depend on your shoe size and how you hold your foot on the pedal. My positioning on the bike was bolt-upright, with a short reach from handlebars to saddle - though of course on a larger frame it would be somewhat different. The seat tube angle felt fairly steep, with the sensation of the pedals being directly below the saddle. I started riding in the bike lane along the very busy Massachusetts Avenue in Cambridge, rode home to Somerville, circled around and returned via the MIT campus where I snapped these pictures. All in all it was about a 4 mile ride on busy roads and side streets.

The bike felt fairly easy to ride, with the 3-speed hub being more than sufficient for the urban environment. It does not have the luxurious ride quality of a Dutch bike, but it is not terrible over bumps either. It is not a fast bike, but fast enough for local commutes and errands. The brakes and gears worked without problems. Nothing rattled or came loose during my test ride. The bike rides as it looks: simply and with no frills. 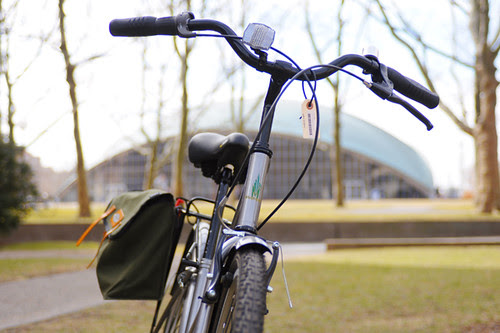 The KHS Green is missing lights, but otherwise it is fully equipped for transportation cycling. While I cannot personally comment on its durability, the dozens of exemplars I have seen parked around Boston don't look too shabby and I have not heard any feedback about component failure tendencies. Having test ridden the bike 3 years after I last tried it, my impression has not changed much. It is not a gorgeous or an especially fast bike, but it is perfectly decent and functional. With a price tag in the mid-$300s, it is a great deal if you are in the market for a step-through city bike on a tiny budget. Many thanks to Cambridge Bicycle for the test ride!
Labels: 3-speed bicycle reviews budget bike test rides