A Day in the Life of Jacqueline

When I initially borrowed Jacqueline, I was not sure whether I would actually use the bicycle for transportation, or just ride a bit in my spare time. But after half a day, I decided not to renew my weekly public transport card for the duration of my stay in Vienna. It is very easy to get around the city by bicycle - not just through the central touristy parts, but through Vienna proper. To demonstrate, Jacqueline will show you one of her daily routines. 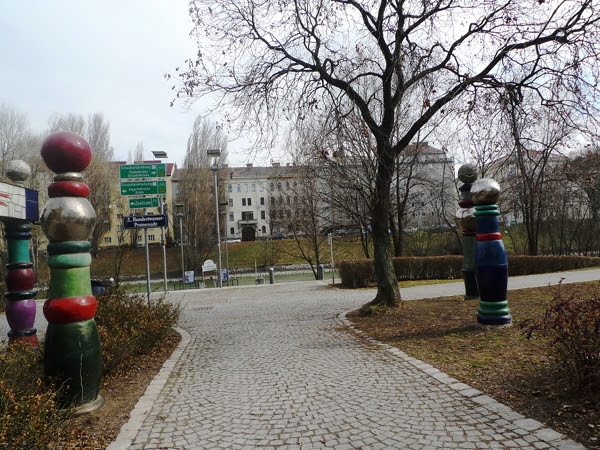 At 7:00 am, we are off to the office via the Danube Canal Path - which functions like a cross-town bicycle highway through Vienna. It just so happens that both my flat and my office are close to the canal, so our route to work is pretty straightforward. Pictured above is the nearest entrance onto the path. 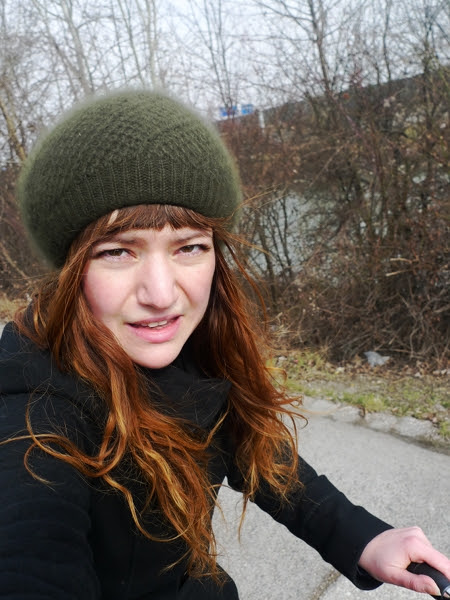 The Danube Canal is an offshoot of the Danube River. Both the canal and the river proper have bicycle paths running alongside, but the advantage of he canal path is that it cuts through the center. 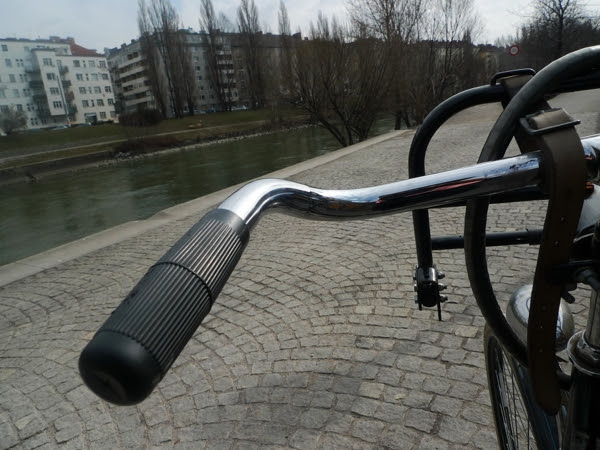 One thing I like about it, is how green the water looks - especially in the morning. No idea whether this is due to reflection from trees or chemical pollution, but it looks nice and so I choose to believe the former. 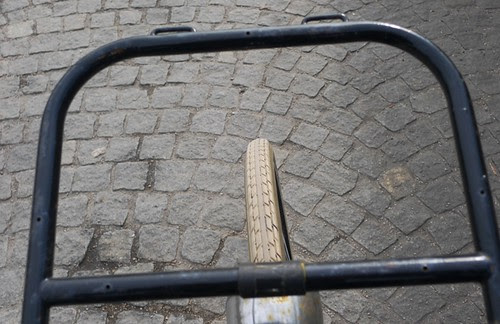 There are some cobblestone stretches along the path, and the 28" Schwalbe Delta Cruisers on Jacqueline are just fine with them. But I have seen other cyclists get off their bikes and walk here. 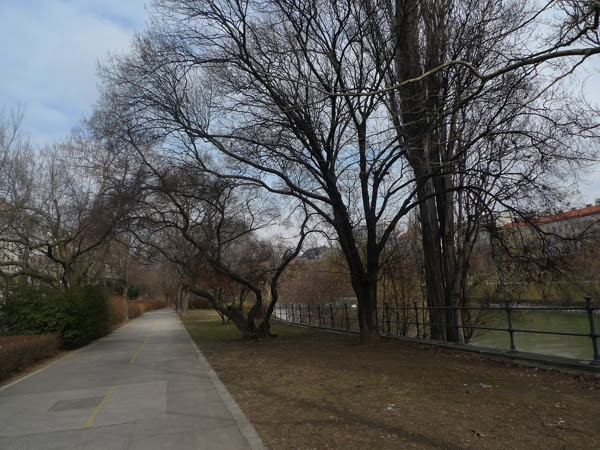 Some parts of the canal path are woodsy and surreal-looking. 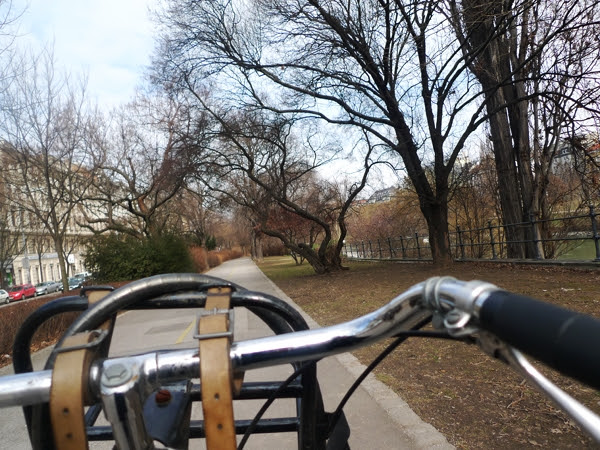 Jacqueline enjoys this sort of scenery the most. 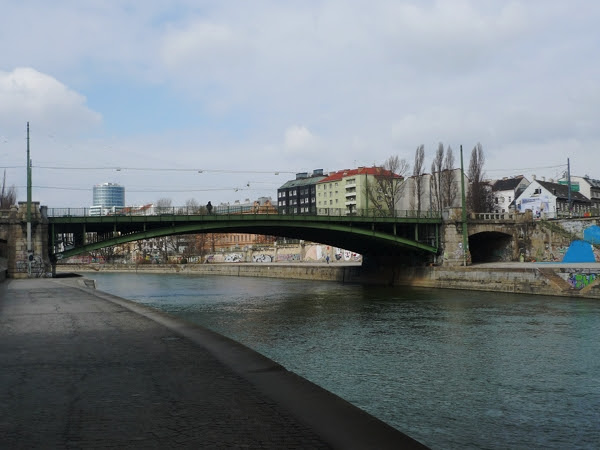 Other stretches are more urban and take you closer to the main road. That's okay too, but cycling here during rush hour will give you a nice helping of auto exhaust fumes. Have others noticed this problem in large cities? I have been told that automobile emissions in Europe (not counting former Eastern-bloc countries) are supposed to be less toxic than in the US, but my lungs seem to disagree. If anybody has more info about this, please share. 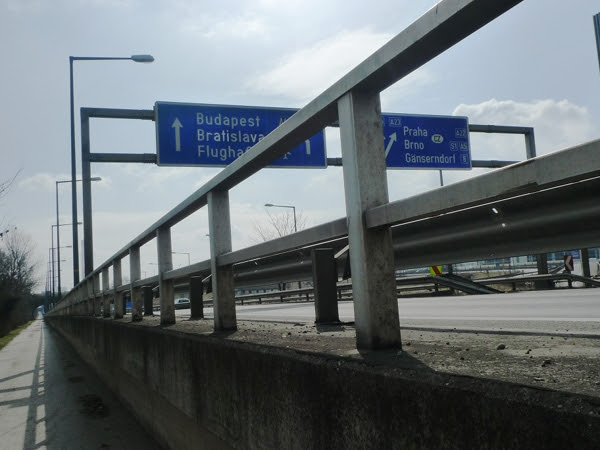 Heading toward the Southern edge of town, the scenery on the Danube Canal Path grows distinctly less picturesque. We are now cycling alongside the highway. And yes, that is a highway sign for Budapest and Bratislava. Bratislava (capital of Slovakia) is only a 45 minute drive away from this point. But instead of going there, Jacqueline heads to the office. 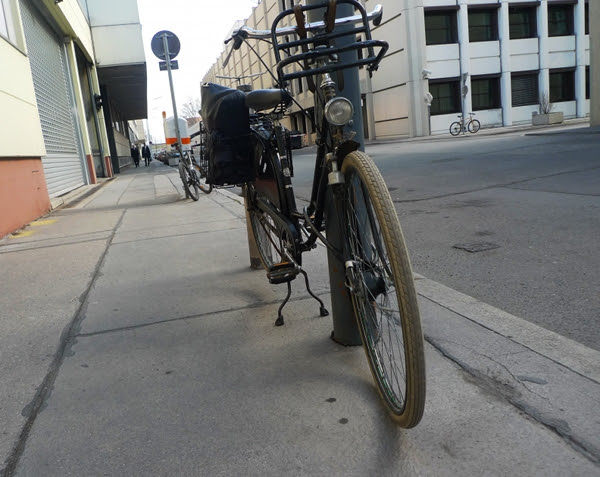 The landscape around my place of work is somewhat post-apocalyptic, but over time I have grown fond of it. Lots of interesting research facilities there, and I work with nice people. The total time it takes Jacqueline to cycle to the office from our flat is 20 minutes - the exact time it takes to commute using public transport. 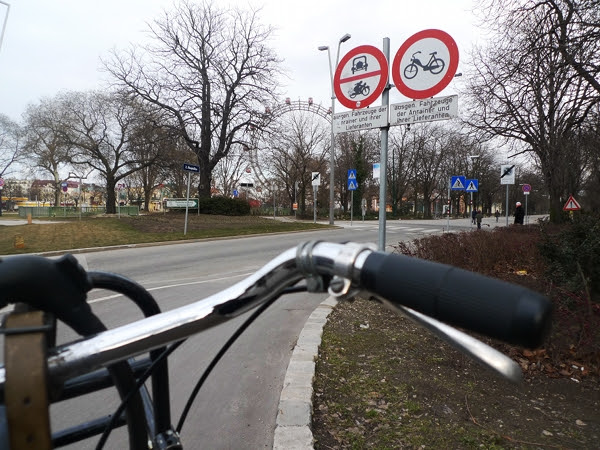 I rarely stay at the office all day, but typically have meetings all over the city. On this day I had an afternoon meeting in a Cafe at the end of the Prater - the largest park in Vienna. 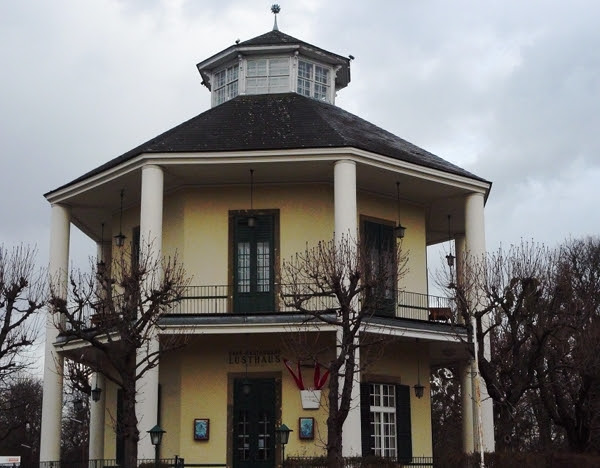 Lusthaus Cafe. Before you misunderstand what I do for a living - it's not what is sounds like in English. The name means "funhouse". This was about a 10 minute ride from the office for Jacqueline. After the meeting, we briefly returned to work, leaving in the late afternoon to run some errands. 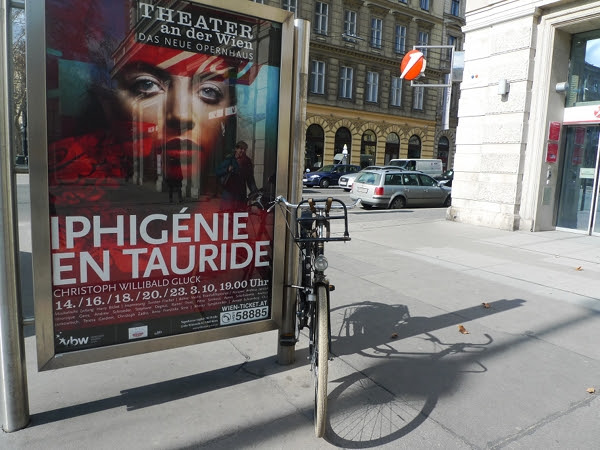 First stop: the bank, in the city center, a 25 minute ride away. To get here, Jacqueline rode back via the Danube Canal path, and then along the Ring Road - which is another "bicycle highway" that loops around the city center. 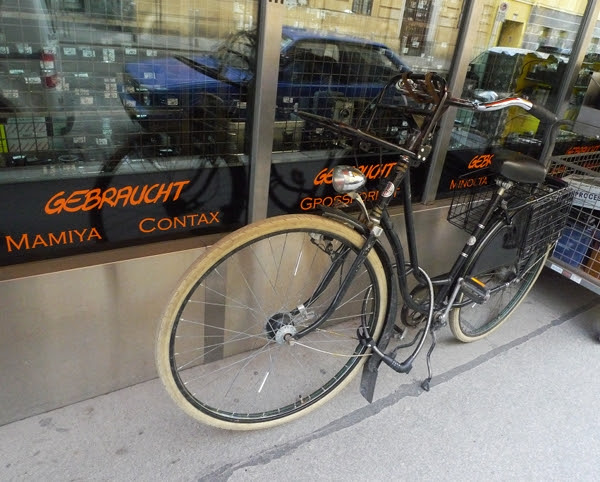 Jacqueline then proceeded to the photo store in an adjacent district - a 15 minute ride away - to buy some film. She rode there mostly on the road, via a combination of bicycle lanes, "sharrow"-marked side streets, and unmarked side streets. The thing about "sharrows" in Vienna, is that they are mostly painted on 1-way streets against the flow of traffic. Yes, against. The speed limit on these streets is usually 30 km/h. This design goes against everything I have come to believe over the past year as a cyclist in Boston. What do you think of it? And could anybody comment whether Copenhagen and Amsterdam are the same in this respect? 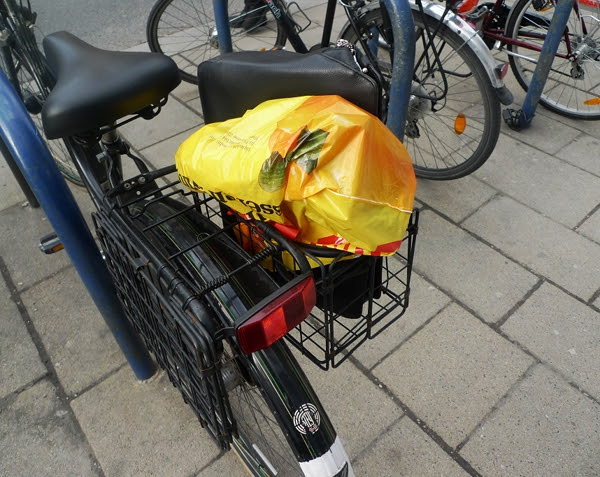 After the photo store, Jacqueline was locked up on a main shopping street and waited a bit while I met a friend for coffee. Then we went to the grocery store Billa. 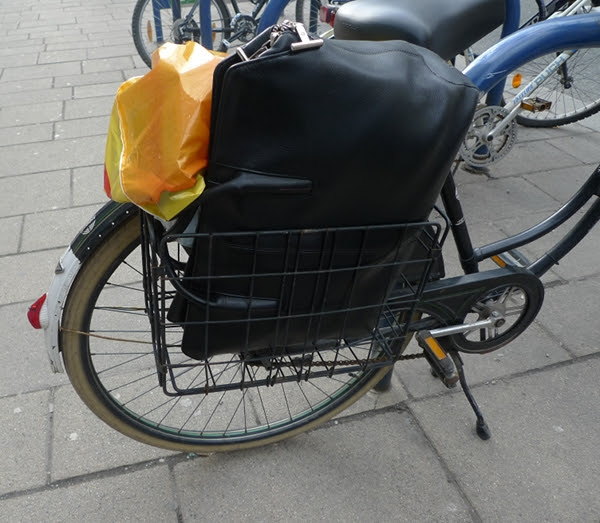 Jacqueline was proud that she could fit 1/2 week's worth of groceries and my laptop bag into a single pannier. (She is lazy and did not want to open the second one.) 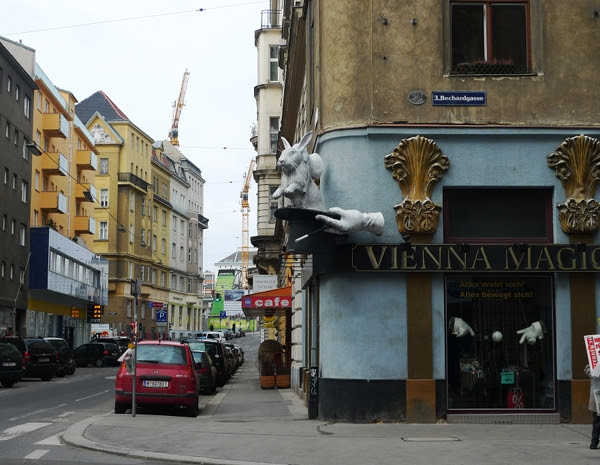 As dusk approached, we cycled home - once again via a combination of roads, then the Ring Path via the route described here. All in all, I would estimate that Jacqueline did a couple of hours of back and forth cycling, and this was typical of how much I travel through the city on an average day in Vienna. Normally all of these trips would have been done using public transport. The travel time by bike is about the same. 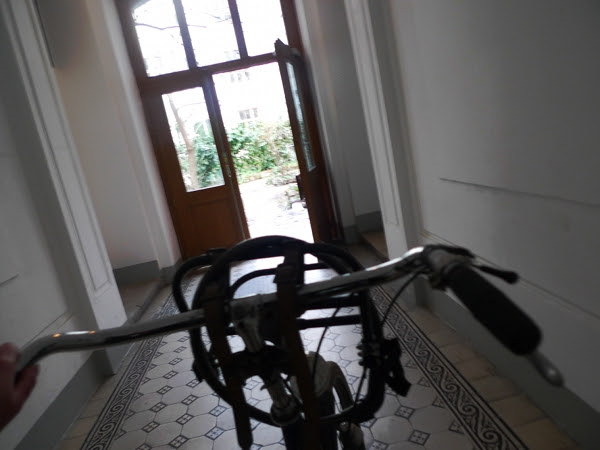 I rode Jacqueline for transportation for the last week of my stay in Vienna. It was wonderful and made up for my bad luck earlier this month. I now feel like an idiot that I didn't just buy a bicycle when I lived here for longer stretches in previous years. Cycling in the countryside on my days off was nice, but I have to say that commuting by bike in Vienna is even nicer. And regardless of what the local shops might tell you, a 3-speed is sufficient to tackle "hilly Vienna". I am by no means in the best shape and had no trouble. Of course, the vintage magic of Jacqueline might play a role in that as well. But in any case - if you are in Vienna, get a bicycle and enjoy the city, whether you are a leisurely visitor or work at a fast-paced job!
Labels: Jacqueline loop frame trails urban cycling Vienna