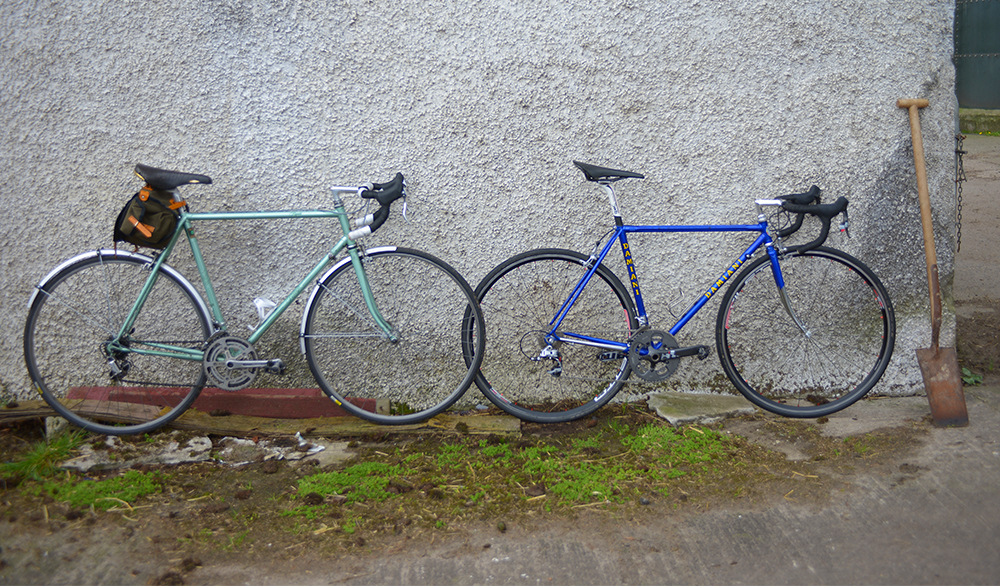 A few times, when writing about a vintage bicycle's setup, I have mentioned that it has been configured for a 'modern fit.' Subsequently, I have been asked what that means. Seeing these two bicycles side by side in our yard the other day provided a convenient opportunity to explain. I will preface this by saying that, to experts on the topic - with whom I do not doubt my readership is replete with - my explanation will come across as overly simplified and merely grazing the surface of the subject at hand. But in the interest of those new to the topic and not technically-minded, a discussion needs to start somewhere. And so I'll start mine here.

The two bicycles in the above photo belong to the same rider. Both bicycles fit him. Moreover, despite their dissimilar-looking setups, they fit him similarly - meaning, he is stretched out in a similar way when astride each one. The bicycles achieve this differently: The one on the left stretches the rider out by means of a long top tube. The one on the right does it by means of low handlebars.

There is a rudimentary geometrical explanation for what I am trying to describe here, but I am going to stay away from abstractions. If you do the reaching for an apple bit, you will start to see how a bicycle can be set up in a variety of ways to achieve similar upper body extension in order to reach the handlebars.

You will also start to see that, just because a bicycle has a metre of seatpost sticking out and a slammed stem, does not necessarily make it an 'aggressive' setup. In fact, depending on the rider's size, it can be quite upright. Similarly, a cyclist riding a bicycle with the saddle and handlebars level can be in a super-aggressive flat-back position.

So why are bicycles today sized down and set up with lots of saddle to handlebar drop, whereas bicycles in the Olden Times (roughly pre-1990) were sized larger, with the handlebars and saddle nearly level?

There are several overlapping explanations, and here is where we get to the more complicated stuff. The move to the modern drivetrain, with its integrated brake/shift levers, resulted in cyclists spending more time on the 'hoods' of their handlebars rather than in the drops. It therefore made sense to lower the entire handlebar setup. Some will argue that the rise in bottom bracket heights over the decades contributed also, as did the changing shape of the bicycle frame as tubing manufacturing practices evolved.

It also goes without saying that there is more to a bicyclist's position than reach alone, and the vintage vs modern setups - combined with a specific frame's geometry - will affect the overall balance and handling of the bike differently. All this is part of a quite multifaceted and sometimes heated discussion, which you can follow on many a bicycle forum.

But also... It cannot be denied, I think, that it's at least partly down to trends - which change for bicycling-related matters just as they do for other aspects of popular culture.

But trend-based perceptions are not always in line with reality. And let's just say that quite a few of my friends of a Certain Age gently poke fun at the younger road cyclists for being far too upright on their bicycles compared to the 'correct' position. Of course the modern bikes, with their short top tubes and tall head tubes, are to blame.

What constitutes an 'aggressive' setup is subject to cultural/ peer/ marketing influence.

From a practical standpoint, the vintage vs modern fit preference matters, mainly because it determines the frame size we look for in a bicycle. For example, referring again to the photo in this post the bicycle on the left is a 57cm top tube frame, and the bicycle on the right is a 54cm. Put simply: for a vintage fit, you will need a larger frame ...and a polishing cloth for those pretty downtube shifters!