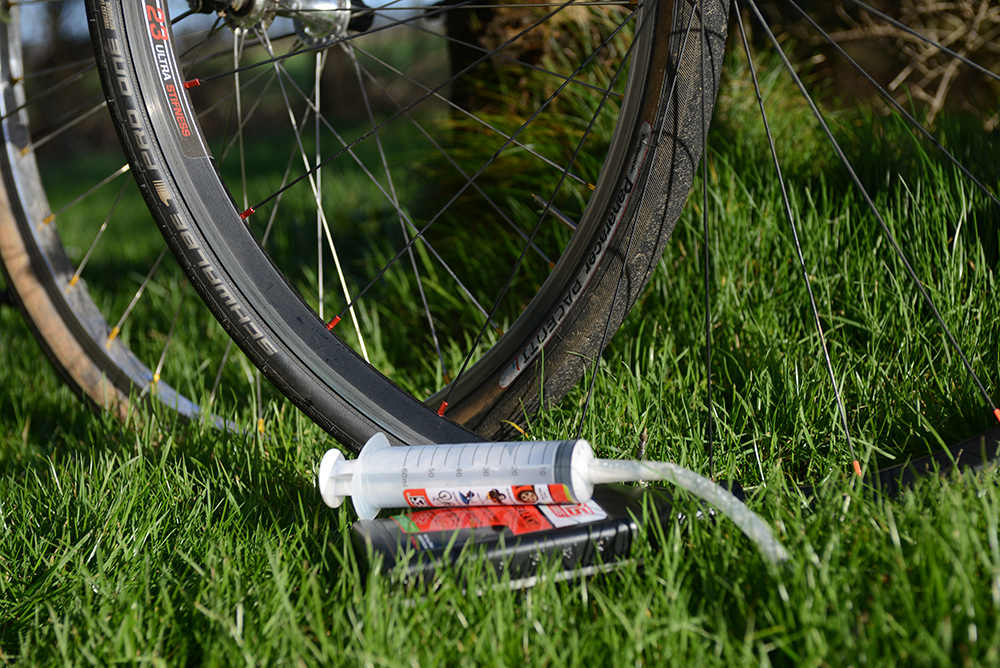 On the heels of a certain holiday which celebrates all things heart shaped, I thought it apt to post this second installment of 'Sticky, Squishy Love.' In Part I, as you might recall, I shared some notes on my experience with tubular tyres. Allow me now to share my experience with tubeless setups.

By way of a basic introduction, the term ‘tubeless' refers to a clincher tyre and rim setup, which foregoes the use of an inner tube. Instead, the tyre is inflated directly. To the naked eye, a tubeless tyre and rim look identical to an ordinary clincher setup. However, it requires some modifications. Namely, the rim needs to be completely sealed to ensure no air leaks from any part of it. Also, a valve needs to be sourced, since the tube it would normally be integrated with is absent. Finally, a specially formulated sealant is pumped into the tyre prior to inflation. 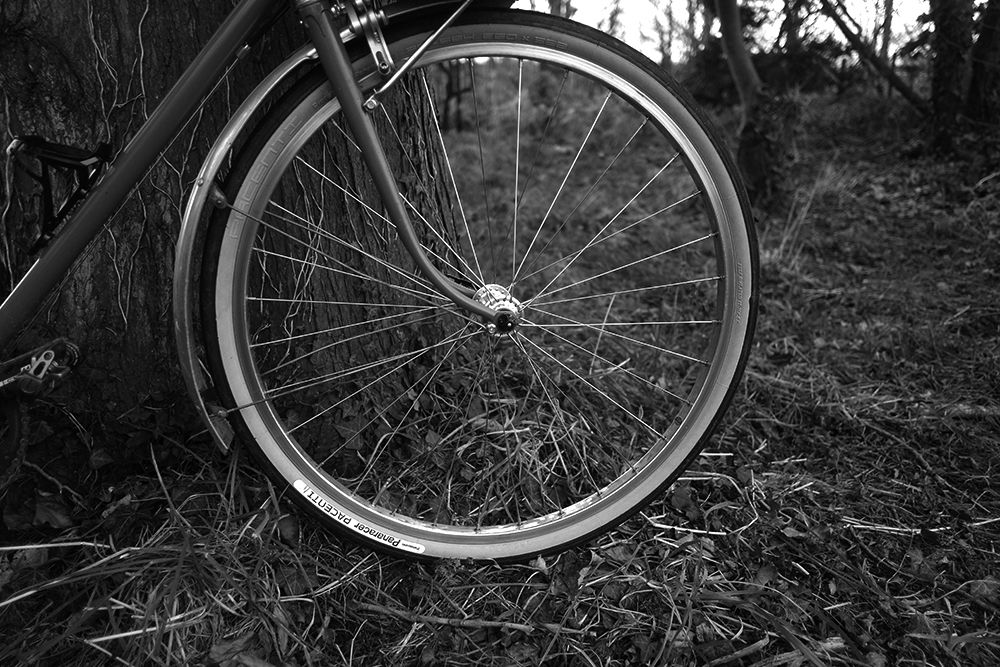 In theory, a number of factors makes setting up one's bicycle with tubeless tyres attractive. The lack of an inner tube is said to make the tyre more compliant, thereby improving ride quality and reducing rolling resistance. It also saves weight.

But perhaps more importantly, tubeless setups are said to offer superior puncture resistance. The reasons given for this are two-fold: The absence of an inner tube removes the possibility of pinch flats. And furthermore, the sealant used in tubeless tyres is meant to be self-sealing in the event of a puncture, eliminating the need for repairing flats on the go (see, for instance, this video, for an ideal version of how this is meant to work).

Unlike tubular tyres, giving tubeless a try requires less of a commitment, since it can always be converted back to an ordinary clincher setup simply by inserting a tube.

And speaking of: Although some rims and tyres are specifically labeled as tubeless-compatible, often even those not labeled as such can be run tubeless. The basic idea, is that the rim needs to be sealable, and the tyre needs to sit airtight. But there are no hard and fast rules and in the end it is really just trial and error. If you are curious whether a specific rim and tyre combination can be run tubeless prior to investing in a bunch of supplies (see next section), an online search will soon bring up accounts of others who have tried it. Although mind you, there is no guarantee. 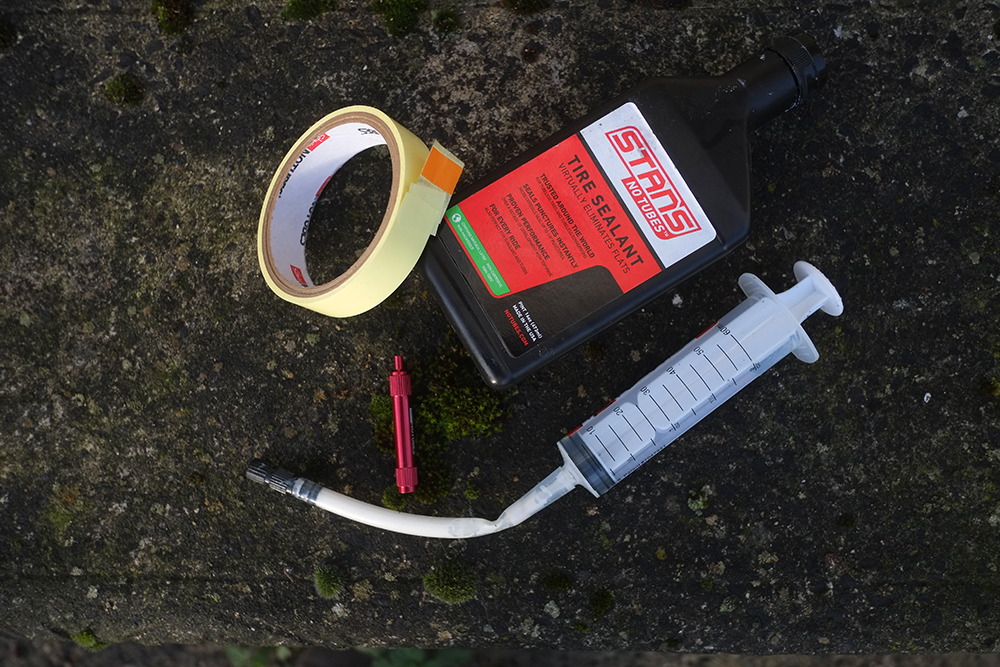 If running a tubeless setup for the first time, you will need the following items (in addition to the rims and tyres, of course):

Now, that last step - and tubeless enthusiasts tend to keep slyly mum in this regard! - is where people tend to run into trouble. Some rim and tyre combinations are very difficult, if not impossible to inflate using an ordinary track pump, and instead require the use of an air compressor which is able to deliver air in quick blasts.

They do make special tubeless floor pumps now, which store pressurised air in a separate chamber and are able to 'pop-inflate' the tyre. After reading their descriptions I am a little skeptical they have enough oomph, but will with-hold judgment until I get a chance to try one.

There are also conversion kits sold, where a thick rubbery layer of padding is placed over the rim to re-shape it for a more airtight fit with the tyre. But for anyone interested in weight savings this rather defeats the purpose. Plus it adds more complexity and cost to the process. And in the end, I am told, it still does not always work.

That is all to say... you may or may not be able to inflate a tubeless tyre without access to dedicated equipment! 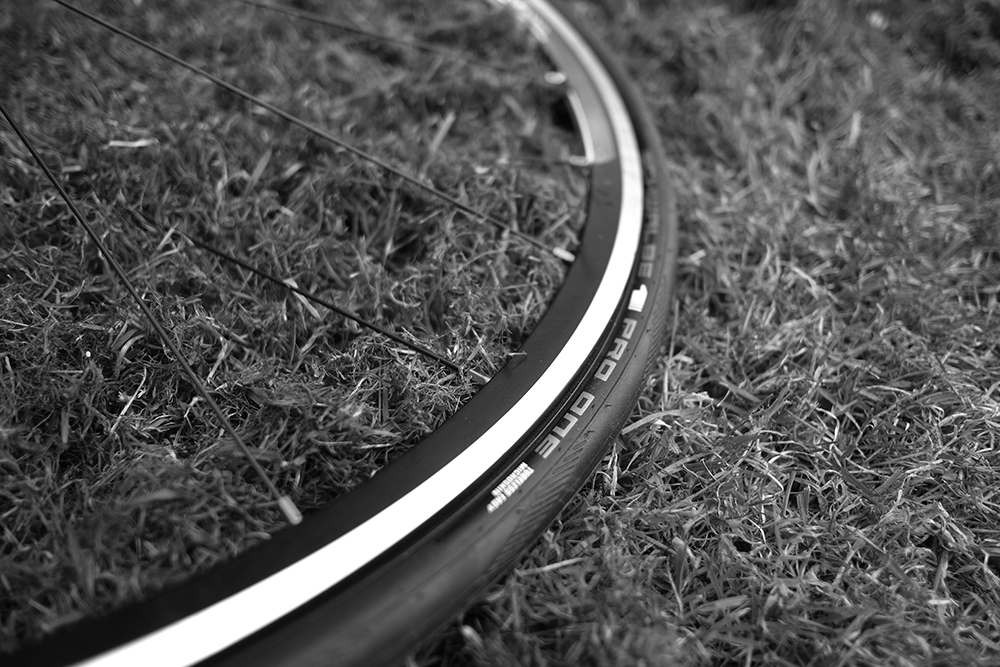 My own forays into the tubeless world consist of the following two experiences:

Over the summer, my husband acquired a set of tubeless-ready 700C road wheels by the Italian manufacturer Spada. Conveniently, they arrived already taped, and with a tubeless-specific version of Schwalbe Pro1 tyres. With the help of the internet, we figured out the other stuff we needed. Installation went smoothly, and we were even able to inflate the tyres with an ordinary floor pump.

Gary enjoyed the feel of the wheels and tyres very much, and after 'running' them for a month and a half on his modern roadbike, he decided to try them on his vintage Italian bike for comparison. The vintage racing frame has tight clearances in the rear triangle, so he had to deflate the rear tyre in order to squeeze it in. We then spent hours trying to re-inflate the tyre, with no success! Having stretched after some use, the tyre would not sit on the rim sufficiently tightly, to be inflatable with a floor pump. No matter how quickly we pumped, the air was not being delivered fast enough. The tyres sprayed white fluid everywhere but would not inflate, inspiring jokes of a nature not fit to be retold to a cultured audience such as yourselves.

At length, we admitted defeat. Gary took the wheel to work and got it inflated with an industrial air compressor. Despite the rims and tyres being tubeless-specific, that was the only way he was able to successfully re-inflate the tyre ...a method that would obviously be unavailable in the event of getting a flat mid-ride! (And I know air cartridges are an option ...but not so much for wider tyres, and not everyone likes this disposable solution). The discovery of this limitation pretty much ended his excitement about tubeless setups. However he continues to ride his Spada wheels (they are his only remaining clinchers) and has had zero flats so far. 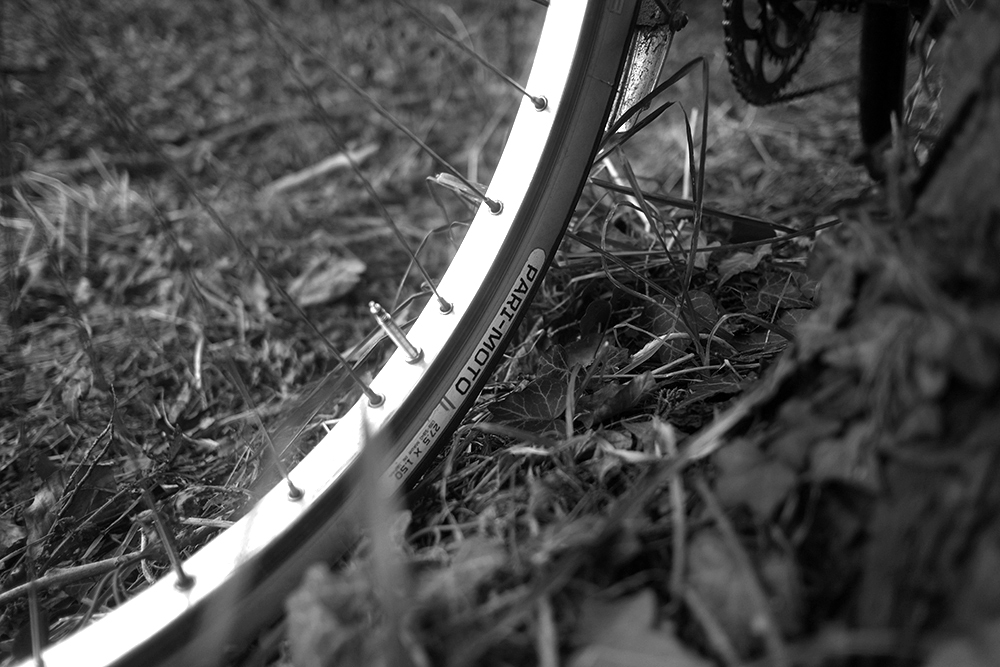 Several months later I decided to give tubeless a go myself - on Alice, my DIY 650B bike with the Pacenti wheels I had rebuilt. My reasons for this were in equal measure to reduce flats, to save weight, and to achieve an even nicer ride feel than the bike had already. There are no tubular options available for (non-disc brake) 650B wheels, so I thought I might as well give tubeless a try - especially since we still had all the supplies.

Now, as far as I understand, neither the Pacenti rims nor the Pari-Moto tyres I used are tubeless-specific per se. But I knew that others (most notably, Peter Weigle) had successfully run this combination tubeless, and that allegedly it worked.

It worked for me as well ...but only with the use of the afore-mentioned industrial air compressor. We were not able to inflate the tyres in the house with a standard floor pump. However, a quick blast from the compressor did the job, and with weekly air top-ups using the floor pump at home they are holding air without problems.

As for the ride feel, having experienced the same tyres with and without tubes, I have to admit it does make a difference. Run tubeless, the same tyres feel 'squishier' and make for a softer, pleasanter ride feel. I imagine on a bike that is harsh, they would reduce that harshness considerably. On a bike that already rides nicely, as mine did, getting rid of the tubes makes for absolute luxury.

After 4 months or so of pretty frequent cycling (it’s the bike I’ve put the most miles on over this winter), I’ve had no flats so far. Whether that’s luck, or the sealant doing its job, I cannot say for sure. However, when run with tubes, I had found these same tyres to be pretty fragile. 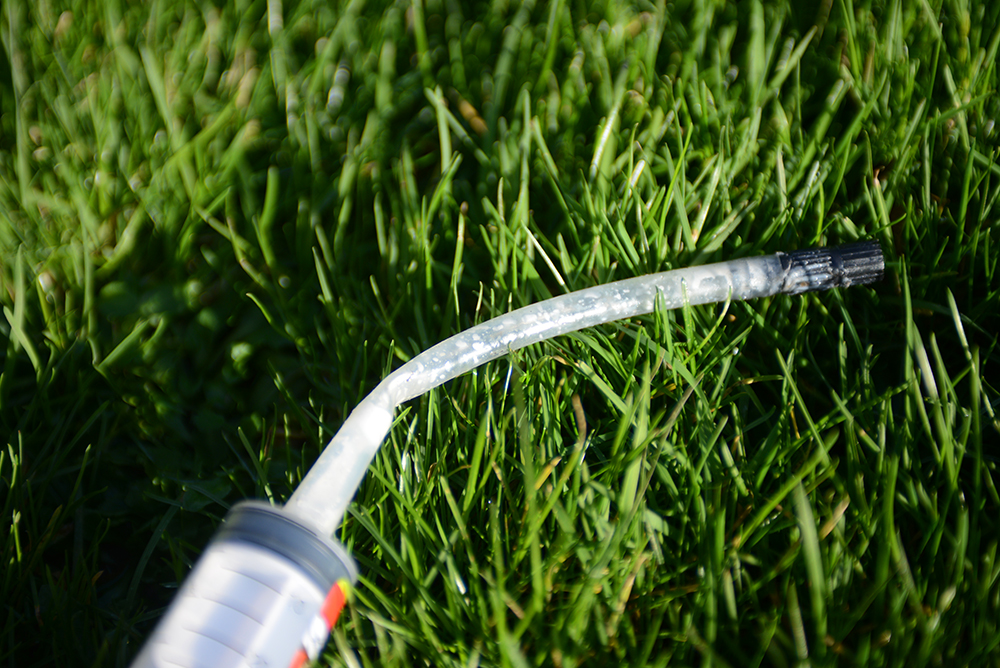 My impression is that tubeless tyres are an excellent idea in theory, but that in practice their usefulness is seriously limited by the fact that - more often than not - they require an air compressor to inflate successfully. I would also add that not knowing about this in advance can lead to lots of frustration at the user end, so the industry is not doing itself any favours by trying to downplay this drawback.

The availability of special pressurised air floor pumps is intriguing, and I do hope to test one in the near future. But once you start adding special pumps, and rim conversion kits and the like to the mix, the cost and awkwardness of the whole thing starts to rise pretty quickly. I suspect that in the future all of this will somehow be ironed out, and I look forward to that time. The idea in itself is appealing. And tubeless tyres eventually becoming the norm is, I think, inevitable.

As always, if you'd like to share your own experiences, you are very welcome to. Have you tried tubeless setups? Which rims and tyres? And was it love or hate?