Sticky, Squishy Love, Part I: Some Notes on Tubular Tyres 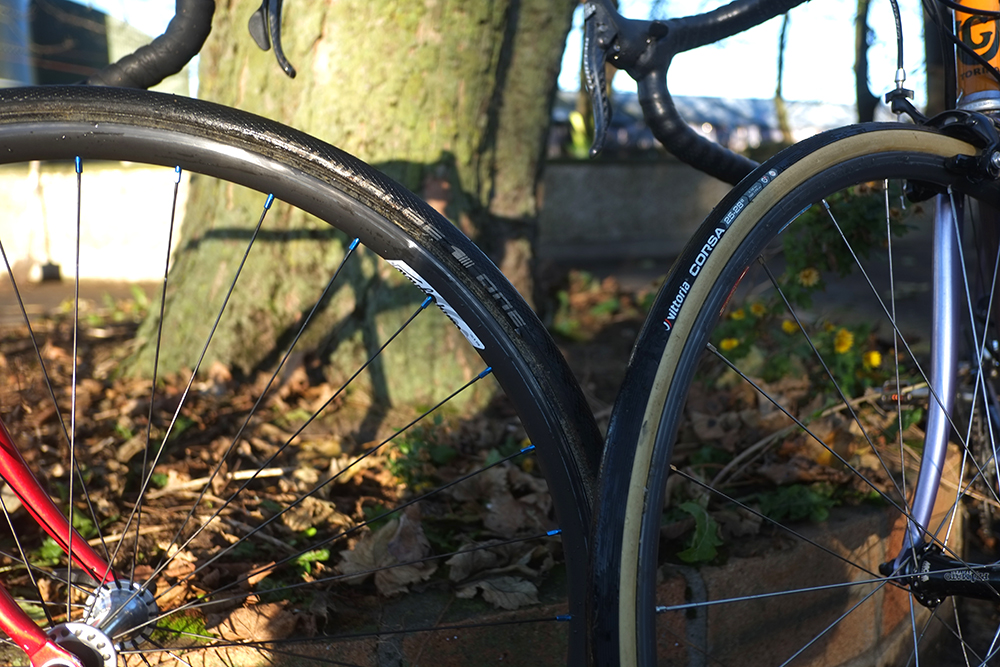 I had no preconceived notions of tubular tyres, until I tried them, for the first time, 6 years ago. A friend in Vienna lent me his track bike thus equipped. I had it for about two weeks and rode it for hours on end around the nearby park and countryside. I do not recall the brand or model of the 23mm tubulars. But the memory of their soft, squishy, very particular ride feel stayed with me for some time and I knew that some day, when the opportunity presented itself, I would have a set of tubular wheels for one of my own bikes.

The opportunity presented itself this summer, when a friend agreed to build me a set of lightweight "vintagey" wheels (this was the prequel to my learning to do it myself). He suggested using tubular rims for the build, and I readily agreed. On riding my bike with the new wheels, I was so ecstatic that my husband grew curious and wanted in on the action. So we built him some tubulars too. And he liked them so much, that he then built another set for his second bike. Long story short... 6 months later and with 3 sets of tubular wheels between us, we feel sufficiently committed to this setup to have now sold off most of our clincher wheels.

Why? Well, I can only speak for myself. And here are some notes on my experience. 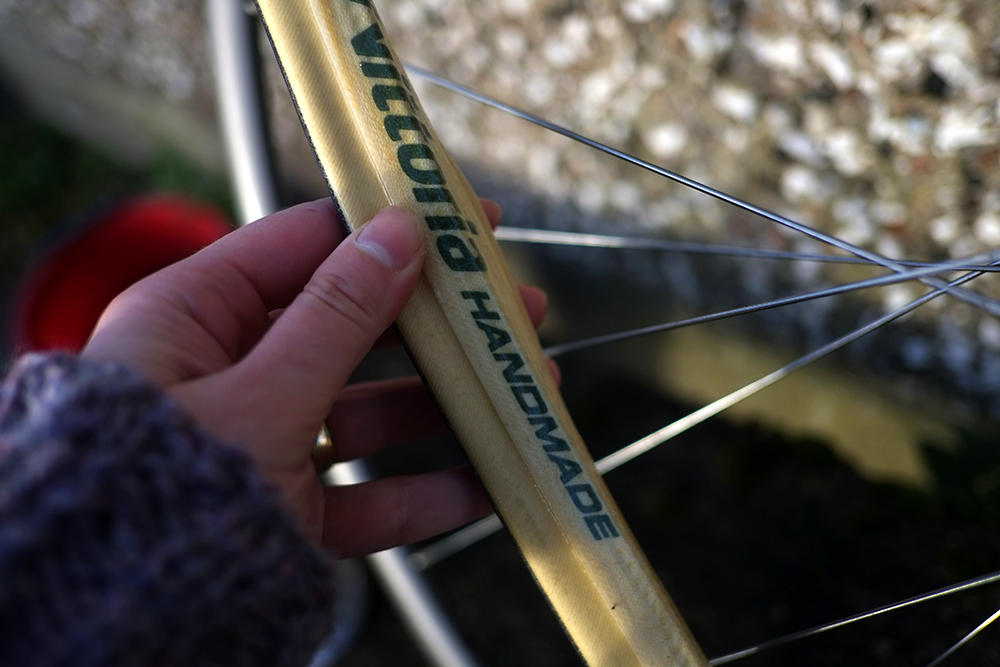 So firstly, what are tubular tyres exactly? Put simply, they are just what the name suggests: tyres in the shape of tubes (I'm great at explaining stuff, aren't I!).

While clincher tyres are essentially strips of rubber with curled edges, designed to tuck under the lip of a rim, tubulars are sewn and sealed closed, designed to be glued onto a rim bed.

Because of this inherent difference, tubular tyres do require tubular-specific rims, just as clincher tyres require clincher-specific rims. So once you choose to go with one rim type vs another, you are committed to a system. 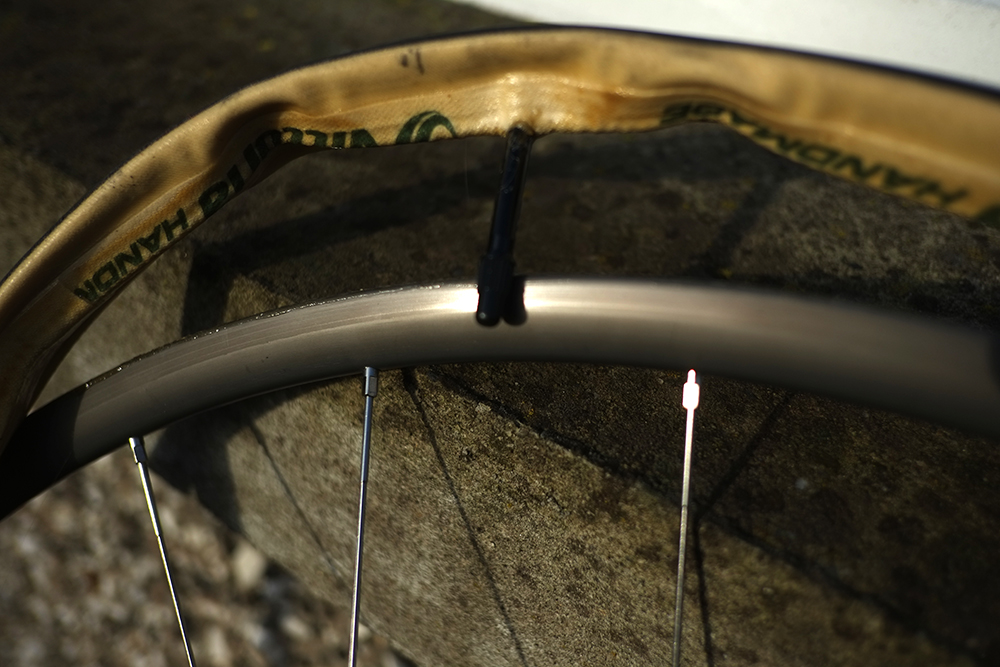 Because they are essentially a tube and a tyre in one, tubular tyres do not require inner tubes. The valve is part of the tyre, and air is pumped into the tyre directly.

For many, this is what makes a tubular setup preferable to a clincher setup: The integrated inner tube and lack of bead reduces weight, and the closed design delivers superior suppleness. But I will come back to this later. 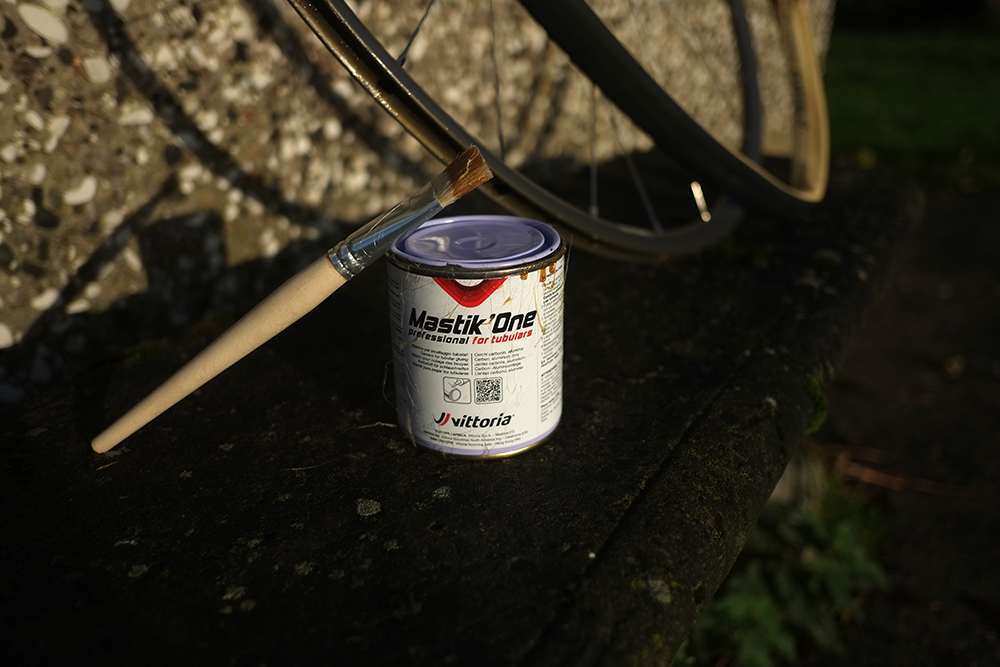 Attaching tubular tyres to the rim requires a specially formulated adhesive, and a multi-step process that takes at least 24 hours from start to finish.

Perhaps understandably, this tends to intimidate those accustomed to clinchers. Gluing a tyre to a rim seems quaint, and questionable in its security. I had qualms about this too at first (OMG glue?!). However, I now feel confident that, if done correctly, the bond is rock-solid. 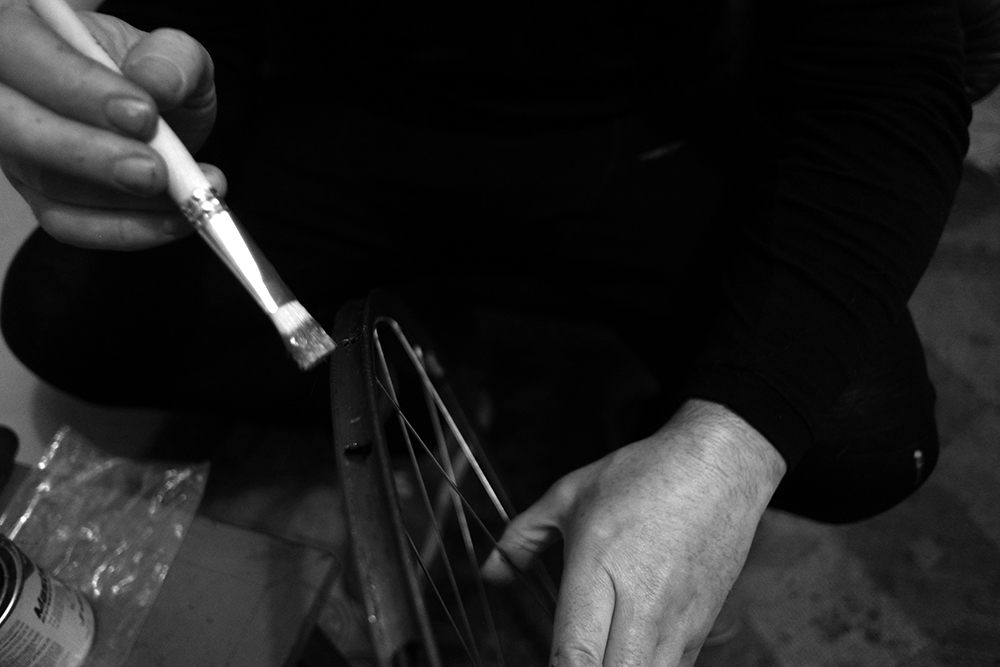 For those who downright hate the gluing idea, there is now tubular tape available instead. But personally, I agree with the argument that traditional liquid glue is best, as it doesn't detract from the tyre's natural flex.

The glue is available from a number of brands, and is sold in small tubes and larger jars. It is easiest to apply using a small tube, as you can just squeeze from the tube directly and do not need a brush. However, buying the larger jar makes sense if you plan to do more than 1 set of tyres in the near future. 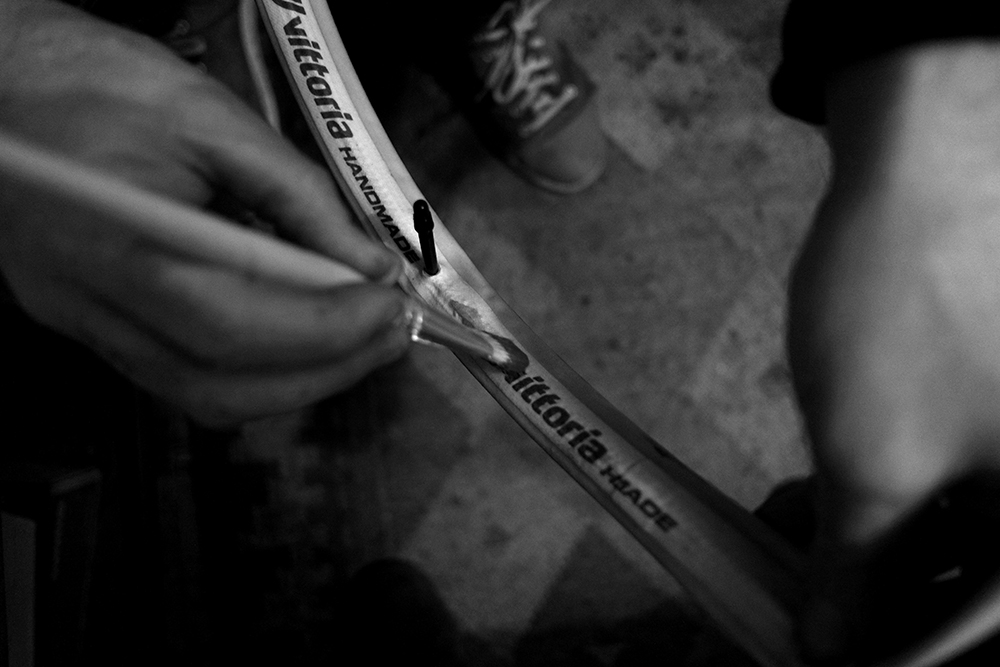 There are many variations on tubular gluing methods. But the basic principle is a 3 step process:

2. Fit tyre onto rim. Inflate to a high PSI. 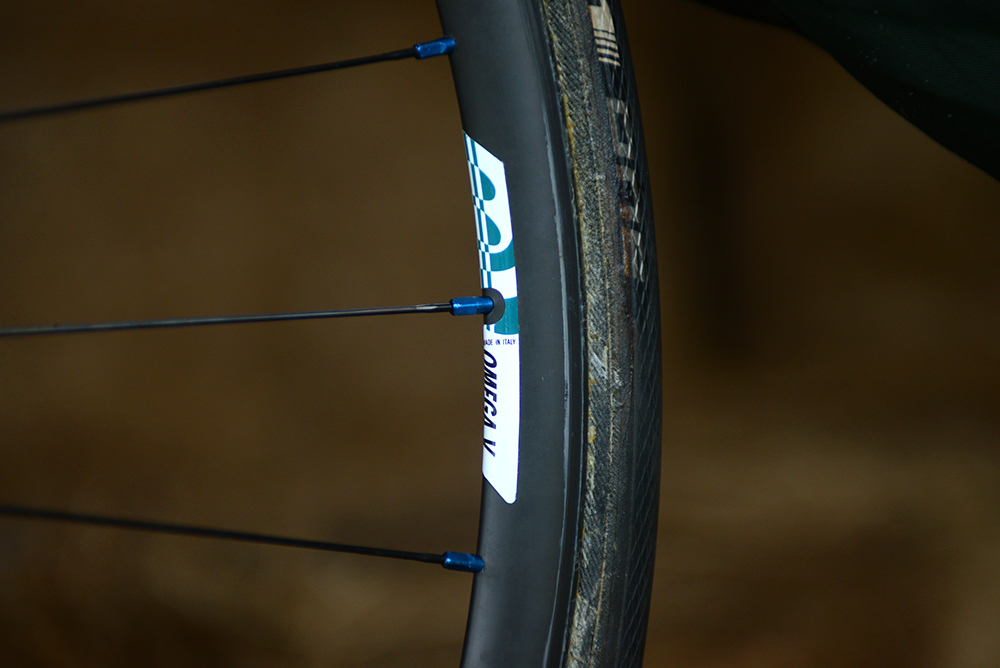 In fairness, each step is a bit more elaborate than that. Ideally, you would stretch the tyre by mounting it onto the rim "dry" and inflating first. You would also inflate it and let it dry a bit after the first gluing, then deflate and add a bit more glue before finally fitting it onto the rim for realz. But you get the general idea: glue on both surfaces, then inflate and let sit. If the surfaces are coated well, the pressure and the drying time will result in a solid bond, so that the tyre will feel impossible to budge. And then, off you go cycling. 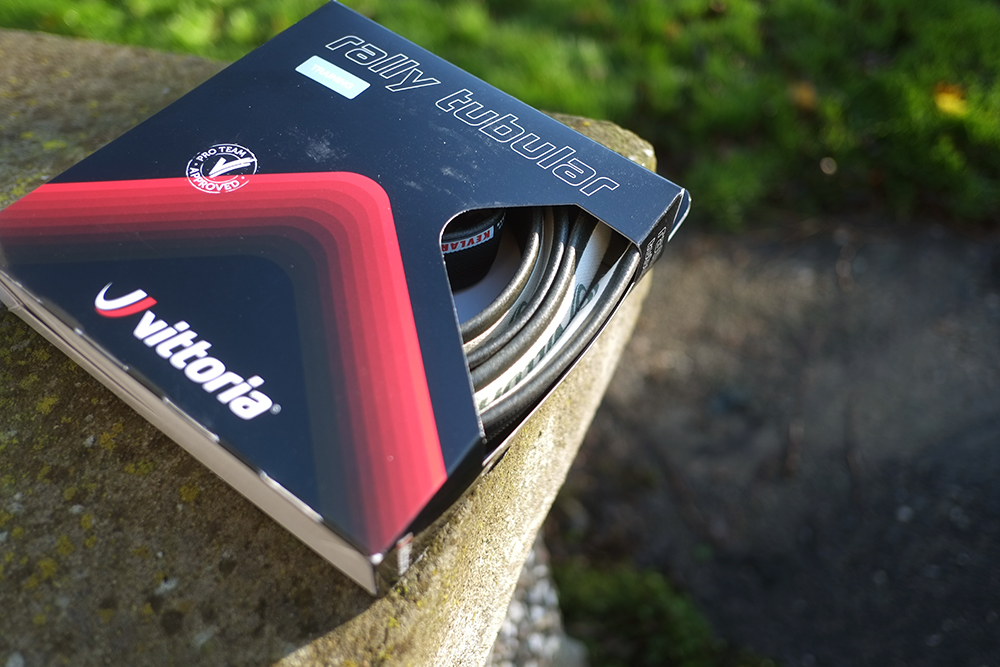 As far as the cost of tubular tyres, there is a pretty wide range. You can buy expensive high end ones for as much as $100 a tyre (Dugast and FMB are considered the crème de la crème) , or budget ones for 1/10th of that price. And a tip if you want to get a good deal on a higher-end tubular tyre: I have noticed there tend to be quite a few pre-owned but unused ones sold on the secondhand market; so if you can tolerate eBay that can be a good option.

On our bikes we use the fairly high-end and puncture-resistant Schwalbe Pro1 and Vittoria Corsa tubulars, and keep some budget Vittoria Rallys as spares.

We have not had any punctures on any of our tubulars yet. But the idea is, to carry a lightly pre-glued spare, and then simply change out the tyre, inflate the spare and ride. The punctured tyre can be repaired at a later time. 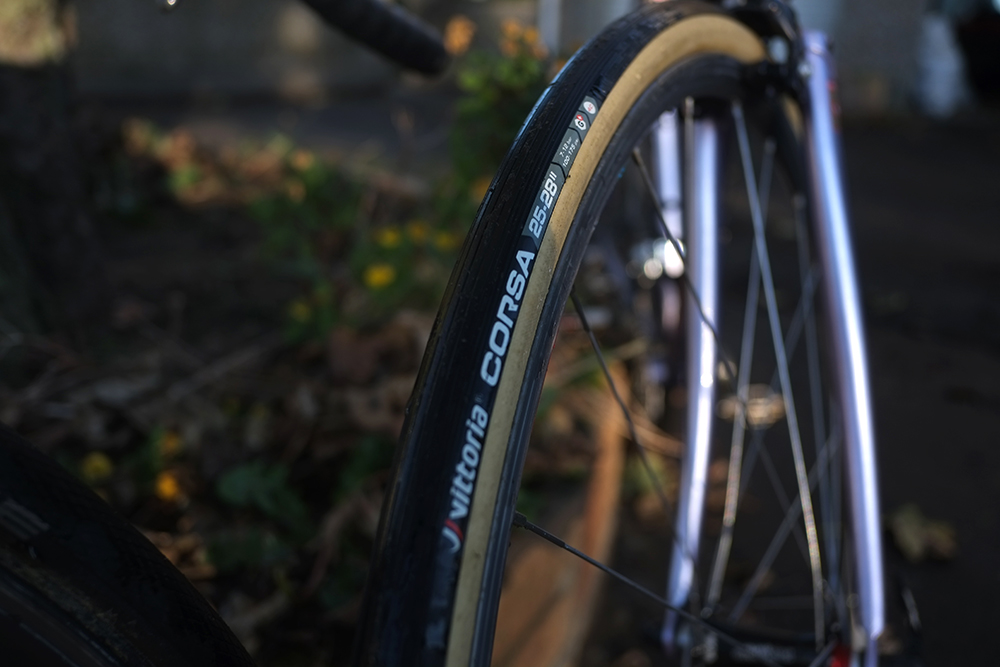 With all that being said, I am aware that on paper the whole thing really does sound kind of complicated. Nevertheless, I prefer tubular tyres by a fairly wide margin. So here is a summary of why:

1. They are comfortable. So ridiculously comfortable. Contemporary clincher-advocates will say this is a myth, that modern clinchers have caught up and surpassed, and so on. In my experience this simply isn't so, and I say that having ridden some of the nicest modern clinchers. There is no comparison. The best way I can describe how a tubular tyre rides... It feels as if it has at least 30psi less pressure in it than it actually does. Or else as if your bike has suddenly become more flexible. The effect is simply amazing, and like nothing else I have felt before.

2. They are easy (for me) to mount. As I've mentioned before many times, I have trouble mounting, removing, and changing out tubes with clincher tyres. This is a hand strength/ nerve damage issue, and it brings me to tears, because basically I cannot change my own (clincher) tyre in a way that is even remotely efficient. In comparison, mounting or changing a tubular is a walk in the park. Glue may be messy, but wielding a paintbrush is much easier for me, physically, that tucking in a stiff bead core. Likewise, cracking the glue seal and pushing a tubular off the rim with my hands is easier than wrangling off a tight clincher using tyre levers.

3. Having had a pretty frightening experience with a rapid puncture on a clincher tyre on a 45mph descent, I am more comfortable with the potential outcomes of getting a flat on a tubular setup. I genuinely feel safer on tubulars.

4. While the need to "buy a new tyre" in the event of a flat is often cited as a deterrent, I am confident that I can repair a tubular myself if need be (I have seen it done, and for anyone with even basic sewing and crafting skills - it is not that big of a deal), so this is really not an issue.

5. I enjoy the tactile aspects of handling and working with the tubular tyres: from applying the glue, to tapping on its crème brûlée-like crust with my fingernails, to the satisfactory crunch of cracking that crust when removing the tyre. Maybe that's a little weird, but all these things make me feel more viscerally "connected" to the tyres, which is nice.

6. Finally, compared to clincher setups tubulars do save weight. It's not my top reason for preferring them, but it does make a difference.

Despite my rather awkward explanations, I hope that this has been interesting or at least a little helpful for those who've always wondered about tubular tyres. They have a reputation for being mysterious and complicated, and granted they are not for everyone. But after the last 6 months, I feel pretty certain they are right for me and am happy to have finally taken the plunge!

{Also: stay tuned for Part II... when I relate our trials and tribulations with tubeless setups.}