Frustrations, Transformations, and Biological Limitations: On Watching My Husband Become a Cyclist Again 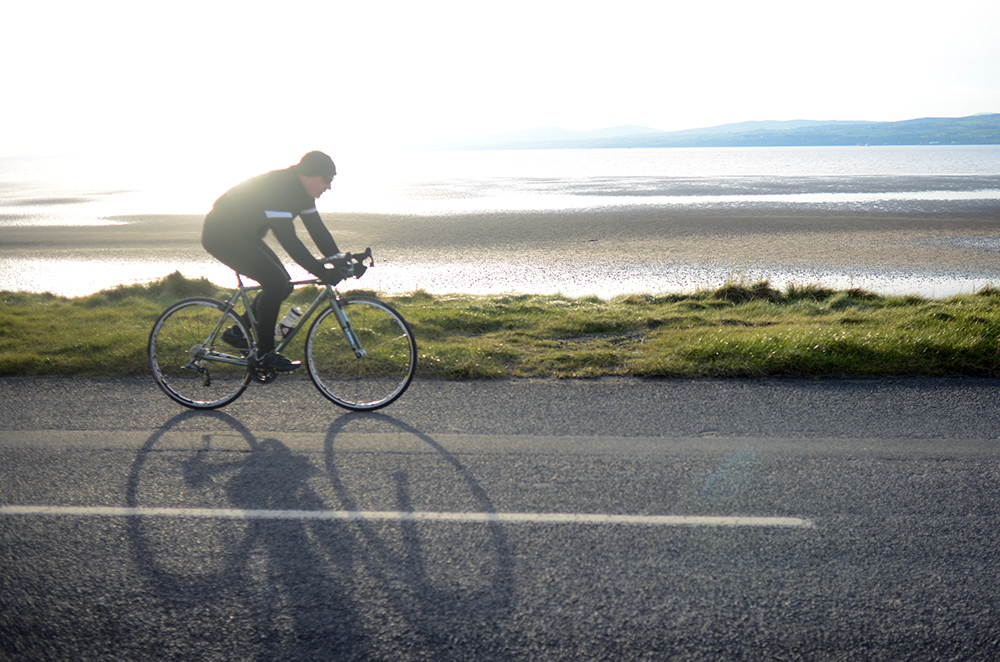 I did know the entire time that it was only temporary. Like one of those stories, where a girl finds a weakened wolf cub, takes it in and nurses it to health as if it were a puppy, only to realise - once it gets better and starts doing scary wolf things - that it really is a wolf after all. I knew that it was only a matter of time until the tables would turn and I - with all my advice, encouragement, and energy - would be left in the dust, smarting with disappointment.

"But then so what?" I thought, and feigned a cool anticipation of this inevitable outcome.

Not long after I met Gary, I learned that he had been a cyclist some years earlier. He rode with a local club, whose members still remember him with uneasy admiration: quick, hard, relentless, in a rabid sort of way. I delighted in hearing the stories and seeing him through their eyes.

He did not experience cycling the way I did. He did not 'enjoy it' as such. He didn’t care for the views or the fresh air or the wind against his skin. He only felt compelled to pedal, and in so doing to push himself to the point of pain and beyond. Grace through suffering and all that. Did I understand?

I'd shrug, with a neutral expression. "You did it your way, I do it mine."

"But hey," he said. "That was then. I am older now. I look at things differently. I see you cycling with your camera and it makes me want to get on the bike again."

And eventually he did, for the first time in a decade. Predictably, it was a bit of a disaster. His idea of a casual friendly ride was, apparently, interval training. Too stunned to object, I went along with it... and after 10 miles nearly had to carry him home. We did not speak of this incident for months.

Other attempts to cycle together followed, with similar results, leaving him increasingly discouraged. Clearly, he’d expected to get on the bike and pick up roughly where he left off 10 years earlier. But at the age of 47 his body - despite being in otherwise good shape from running and weight training - was not cooperating. He couldn't do distances. He couldn’t do hills. He couldn’t do anywhere near the speeds he remembered doing. Oh, and everything about the bike felt uncomfortable; every body part hurt.

Finally I had the presence of mind to take control of the situation. Did he want to get back into cycling? I could help. But there would be an enforced speed limit. We would increase the distance gradually. And he'd listen to my advice on gearing, nutrition, and bike fit.

Somewhat to my surprise, he agreed readily, and put himself entirely in my hands. From then on, I was 'in charge' of cycling. I determined the routes, the distances. I suggested what to eat and when, how to dress for the weather. I advised on what adjustments to make to his bike setup based on the pains he was describing. I convinced him to try lower gearing and a different saddle.

After about a year of this, we were able to do 20-30 mile rides together at touring speed, without bonking or significant discomfort on his end. The progress was slow and frustrating. At times I could tell it was difficult for him to stick with it, such a blow it must have been to his image of himself as a cyclist. What kept him going was a difference in attitude: A new appreciation for the local landscape, as well as for the social aspects of cycling. We would pedal side by side and chat and enjoy the views of the beautiful countryside. It wasn't cycling as he remembered it. But it became a new pastime. There were highs and lows, and creative pain management, and a learning curve as far as food intake. But he stuck with it.

By the following year, it was clear that he had turned a corner. While still not back to his 'old self,' it was as if there was now a new solid base to his cycling. He continued to tweak his bicycle setup, no longer needing my advice at this point. With a tolerance for milage now built up, he also began to work on his speed ...and, in turn, on mine! Our relationship on the bike now became more reciprocal - with my helping him increase distances, and his helping me increase speed. By the end of our second full summer cycling together, we were able to cover 50 miles at a decent clip - both of us transformed with each other’s help. We went on lots of scenic and memorable rides that year and even successfully (well, sort of!) tried our first overnight mini-tour. It was the ideal balance, I thought at the time.

But of course, nothing stays the same. And this past summer was when things transformed dramatically. We had planned out a 5 day tour through County Kerry. It seems funny in retrospect, but at this stage Gary was still nervous about his ability to handle distances, especially on consecutive days. So we kept the daily distances at sub-50 miles, and designed the tour as a loop with several potential shortcuts back to the starting point, in case we had to cut it short. As the tour progressed, however, an interesting thing happened. With each day on the road, instead of growing tired Gary seemed to be gaining in strength, energy and confidence. By the final day of the tour I was, frankly, ready to wrap it up, while he could have easily kept going!

Upon our return home, he was a changed creature. He had no discomfort on the bike to speak of. No distance seemed too far. And his average speed, when he’d go out on his own, was back to what it was in 'the old days.' It had taken him 3 years to get back to his prior cycling shape. But get back to it he did, and then some.

It was actually quite amazing to fully grasp just how much stronger he now was on the bike than me. He could climb any incline in seemingly any gear combination. He could accelerate with such violently quick bursts, that just watching him gave me vertigo. Rides which I found so challenging as to leave me drained for days, were for him now effortless. Finally, our biology had caught up with us.

I was proud, to have helped him get there, in whatever small way. And I was also disappointed, for I fully expected at this point, for our cycling paths to diverge: For him to re-connect with the local fast crowd, and for me to do my own thing as I'd done before. I was sad about it. But I also encouraged it. I was no match for him. And I knew he liked fast, competitive roadcycling. I didn’t want to hold him back.

So he reconnected with the local men again and went out on a few rides. But it didn’t last: He no longer felt the competitive drive that had dominated his former cycling life. And he missed cycling with me.

So he stuck with me despite his transformation ...which, to be honest, is a circumstance I am not always sure I am happy about, since I now get the full 'benefit' of his energy and attention! There are times he tries to make me his project and pushes me beyond my comfort zone, and then beyond that still. It frustrates me - because it’s difficult. And even more so, because I know that no matter how hard I work I can never match his physiology; I will never become his equal on the bike.

But then there are times, when I climb a hill, almost effortlessly, or do a treacherous descent without fear, and I know that I would never have gotten to this point if left to my own devices. And this makes me happy, because it is not really about the hill, or the descent, or the speed, but about the freedom and independence that having this new strength grants me.

It's a reciprocal situation. And through it we've developed a way of cycling together that is like neither of our former styles, but a new one entirely. There are times we play games with speeds and distances and elevation gains and route shapes, and this is something that I genuinely have fun with even though I never would have liked it in the past. There are times we seek out mountain passes, explore new territories. And there are times we simply ride to the nearest cafe.

All in all, this is not an especially exciting story. But it's one I wanted to share, because I know that a good portion of my readers are older men - many of whom got back into cycling after a pretty long break. Some are now well into their 'comeback,' others are only now getting back on the bike. It can be difficult to readjust expectations, to readjust our image of ourselves. But the thing to remember is... whether we take breaks or not, we are anyhow always changing.

Whatever our former history, our memories of prowess or lack thereof, there is always room to experience cycling in a new way, to integrate it into relationships, and to find in it new aspects of ourselves.

And with that said, Happy Trails!