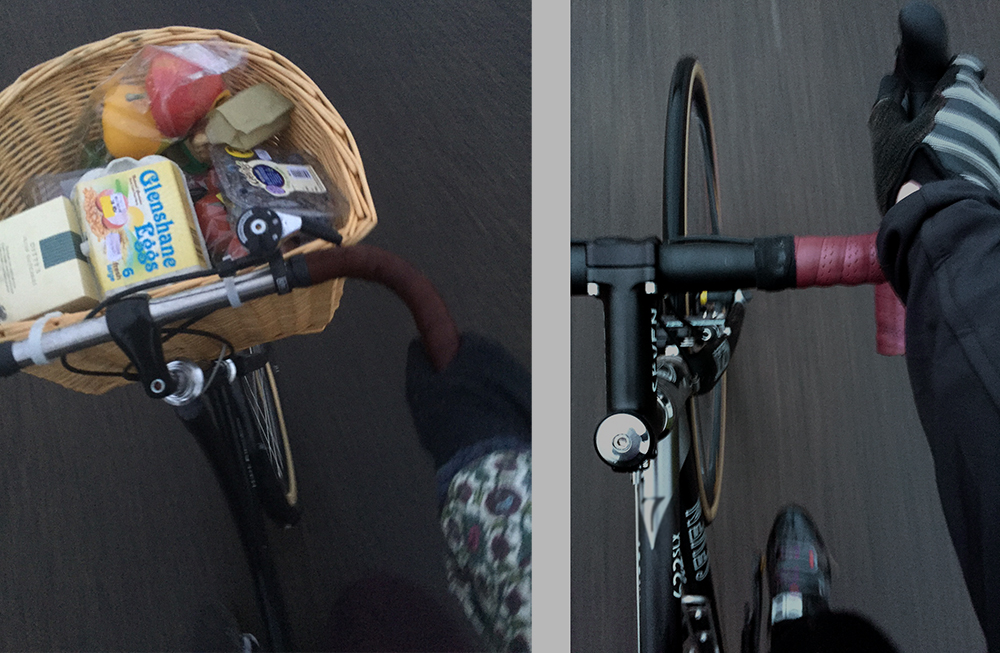 It's a game I inadvertently ended up playing over the weekend, and I now pass it on to you. In short:

A. ride short distances for work and errands every day, but give up roadcycling completely, or

B. put in all the road miles you want, but give up utility cycling altogether?

It may seem like a silly and unnecessary choice. But actually the question was posed to me seriously, by an acquaintance who is moving. She is choosing between two different locations. One is densely urban and close to her new job. It's a good opportunity, in that the property is a partially work-subsidised, very nice townhouse. The neighborhood is cycling-friendly and full of amenities. But it is far from the edge of the city and will make setting off on her roadbike so inconvenient as to make it virtually impossible once her time constraints and work/family obligations are factored in. If she moves to this location, she'll be able to ride for transport all she wants, but will most likely give up roadcycling as a sport.

The other location is a house that is way out in the outskirts. It is sort of close to her husband's job, but the bigger consideration is that a family member owns it and has offered them a favourable deal. The house is beautiful, as is the rural location. She can go out on her roadbike straight out the front door. There is even a cycling club that meets down the road. Unfortunately, the area is purely farming/residential, with not even a village centre nearby. It is 12 miles from the city, and the roads in that direction are not cycling friendly. If she moves to this location, she'll be able to do a lot of roadcycling and other outdoor activities, but will most likely give up utility cycling, using the car for transport.

Of course the solution that immediately comes to my mind, is to compromise. Find an affordable, maybe not so glamorous property on the very edge of the city, so that it's both cycleable to work/shops and a good starting point for road rides? But I appreciate that logistics might not make this possible in all situations.

The polarised choice also brings into focus my own preferences. Because if pressed between A & B, I would choose A without even needing to pause and think about it.

"Ride short distances for work and errands every day, but give up roadcycling?" Sure. I mean, I'd rather not give it up. But if I had to, it would not be a catastrophe.

"Put in all the road miles you want, but give up utility cycling?" The idea of this makes me panic. I do not think I could cope.

It may seem odd to consider myself primarily a transportation cyclist, when my road milage dwarfs my utility milage. Though if I look at it in terms of trips rather than miles it makes more sense. I make many short utility trips throughout the day - compared to one roadcycling trip a day, at most.

But it's about more than milage, or numbers of trips, or any other quantifiable stuff. Roadcycling is a pastime, a passion. It in turn engages me, obsesses me, brings me joy, frustrates me, challenges me. But as fantastic as all of that is, I know that I can do without it.

Utility cycling... Hmm it is different. It is far less dramatic. But more solid. It is not a passion, and not a pastime, but rather somehow a physical part of me - like eating and drinking and sleeping and needing fresh air. I might take it for granted most of the time. But to even imagine being deprived of it, feels suffocating.