Seek the Wise One 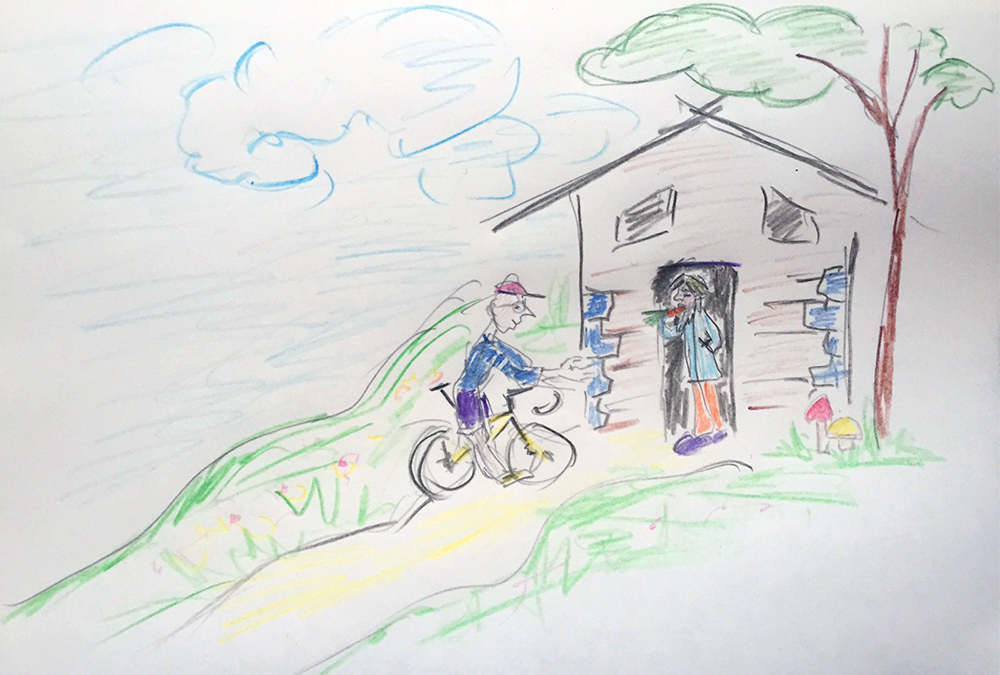 "What is the thing you want most in the world?" they asked the Struggling Cyclist.

"I want to climb steep hills on my bike," he replied. "And I want to be fast. And I want it to feel easy."

"Ah! Well, you just have to ride again and again until all of those things happen."

"I have tried. But it's hard. And my progress is slow. I am always the Struggling Cyclist."

"Oh. Well, in that case there is only one thing to do."

"You must visit the Wise One. If you go to him, and give him the things he asks for, he will teach you secrets - tremendous, spiritual secrets - that will help you circumvent all that and make your wishes come true."

And they marked the address on a map.

The Wise One lived many miles away. To reach him the cyclist pedaled for days, crossing several mountain ranges. As usual, he struggled terribly, dismounting and walking his bike for miles at a time. But at length, he reached a village in the middle of nowhere, and some miles beyond it a small white chalet atop of a freakishly steep hill. It was precisely the sort of nondescript structure that wise and magical persons are known to choose as their residence.

As if foreseeing his guest's arrival, the Wise One opened the door before a single knock had sounded. His age was as stunning as his frailty. He wore garments of indeterminate designations and formidably padded slippers. His eyes were half-shut, his face an ashen bundle of folds, and his brows deeply furrowed.

"What is it that you want, cyclist?" he said in a not entirely welcoming tone. But this was to be expected.

"I was told you could teach me tremendous spiritual secrets that will end my cycling struggles, if I give you the things you ask for."

The Wise One studied the cyclist for several minutes silently. He furrowed his brows ever deeper and exhaled many meaningful sighs. And finally he spoke.

"As you say, you must give me what I want. And what I want is salami. Mind you, be sure to get the good organic kosher stuff. In that village over there. And be back in 40 minutes."

And with that he shut the door in his visitor's face.

In a panic, the Struggling Cyclist raced to the village deli. To make it there and back in 40 minutes seemed an impossible feat even in the best of circumstances, let alone having to deal with scaling several hills in the process. But so desperately did the cyclist desire access to the Wise One's wisdoms, that in a pool of sweat and with barely half a second to spare the task was completed.

Again the Wise One opened the door just as the cyclist was poised to knock on it weakly. Without a word, the elderly creature grabbed the salami from his visitor's trembling hand, broke it in half, and began to munch enthusiastically. Then, nodding with approval, he handed the other half back to the cyclist to eat, observing in silence. And then he opened the door wider, gesturing his guest inside.

When imagining his visit, the Struggling Cyclist had been determined to memorise every inch of this mystical dwelling's interior. However overcome with exhaustion, he collapsed into sleep straight away and saw nothing.

"Sardines. Loctite. And a hole puncher."

"And be sure to return within an hour and a half's time," he added sternly. "I require these items most urgently."

In the bitter morning cold, the Struggling Cyclist despaired. This time he would need to visit several shops, in several different villages - each of them up a horrendous incline. He still ached from his long trip and from the previous evening's errand. How could he cope with this monstrous task?

But the Struggling Cyclist reminded himself, that he had come to seek enlightenment. And if The Wise One had eccentric wants which needed satisfied before he would yield his secrets, then so be it. And so to one shop, then another he pedaled will all his might. And though many times he wished to dismount and walk on the uphill sections, the time did not permit it. And so he remained on his bike, and pushed, and sweated, and arrived at the chalet a sweaty nauseous mess with the requisite items in tow.

Again as if by magic, the chalet door opened at the precise moment of the cyclist's arrival, the scent of freshly baked bread wafting out. Out stepped the Wise One and again, saying nothing at all, grabbed the objects out of the cyclist's hands. He then wordlessly slipped back indoors and for minutes on end the cyclist could hear the sounds of frenzied hole punching and tube-squeezing fill the air like some glorious concerto. Finally, the old man emerged with a platter overflowing with freshly baked bread and sardines, which the cyclist was invited to eat on the small front porch.

The strange requests continued. The Wise One's whims were varied and unpredictable. One day he might demand canned lichen fruit, sold in one supermarket only, that supermarket being at the other side of a mountain pass. On another occasion, he'd request a VHS tape documentary on the fountain pen collecting community between the years 2003 and 2009, available in a library two counties away. From sauerkraut, to orthopedic shoe inserts, to oversized bakelite sewing buttons, the demands were seemingly endless. And always urgent. Each time the Struggling Cyclist could only barely make the deadlines, arriving half-unconscious and needing food and sleep so badly by the time he made it, that he could not describe the interior of The Wise One's residence.

Finally, after several weeks of this, the cyclist grew unbearably curious. When would the time finally come when the Wise One would deem him worthy to reveal his secrets to? Or was it up to him to ask - nay, to demand, insisting that he was ready? As he contemplated this on his return from an errand to procure a roll of burlap sacking most urgently, suddenly the cyclist was struck with a realisaiton: he was running early!

He was running early. And he was feeling clear-headed enough to be thinking all of these thoughts. But most importantly... he wasn't struggling. In fact, he hadn't struggled for days now, he realised, no matter how steep the hills to his destinations and how tight the deadlines.

When the door of the Wise One's chalet opened, as always, in anticipation of his arrival, the cyclist ran forth and put his hand on the old man's shoulder joyously.

"I know what you have done for me, Wise One! How utterly stupid of me not to see through your method earlier."

The old man stood there silently for some time, darkening in the face. Finally he uttered a deep, regretful sigh.

"Dog gone it," he said, with a sad shake of his head. "And there I thought I had another fool who got the address of that other feller wrong, to do all my shopping. Ah well, I suppose you'll be going now. Well at least you lasted longer than the others!"

And as the cyclist stood there, speechless, burlap sacking still clutched in his hand, the old man added:

"And for heaven's sake, get that nasty drivetrain cleaned and oiled! I can hear you coming up the hill a mile away."