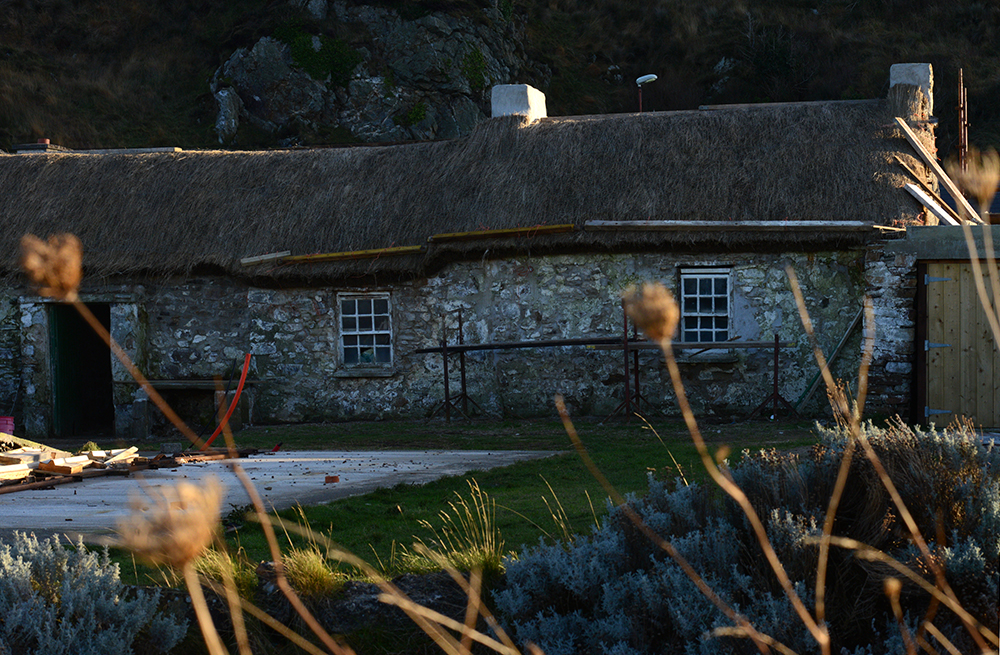 Visiting the Gap of Mamore a couple of days ago, we intended to photograph the formidable pass in a way we had not had a chance to when transversing it on bicycles earlier this year. But before we reached the mountain road, we made a detour for a tiny hamlet by the beach at Tullagh Bay, having noticed something there that piqued our curiosity. 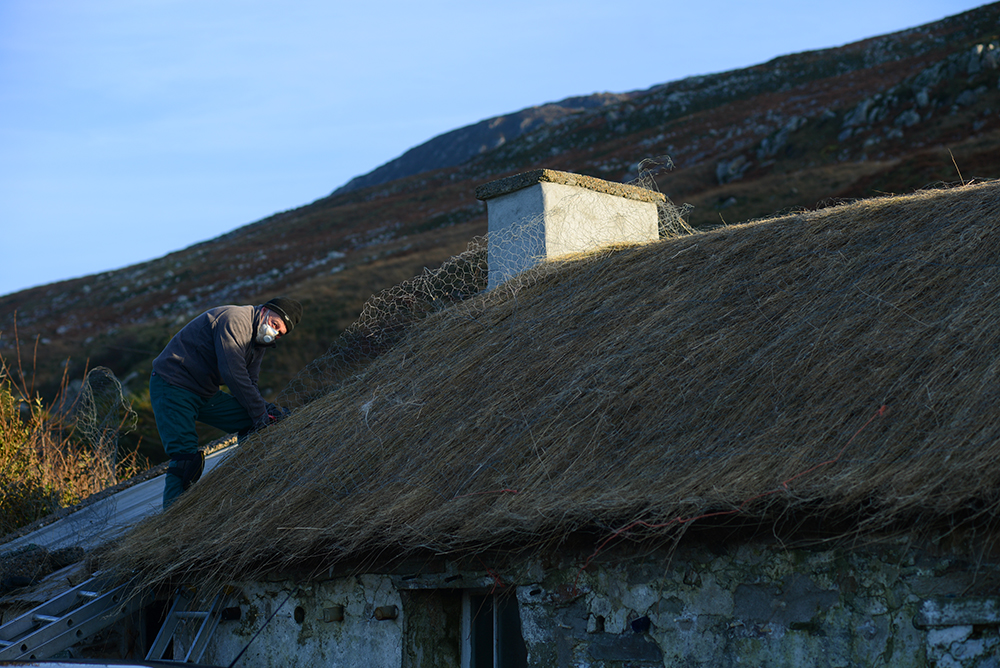 On arrival there we saw that a cottage, which had formerly been a crumpling ruin, was being renovated. A man was up on a ladder, laying down the thatch. Of course I could not resist and meandered toward him carefully to watch. Minutes later, we were inside the cottage, being given a historical tour and a telling of its repairs.

Thatched cottages, once iconic of the Irish landscape, had all but disappeared from existence in the past several decades. Unvalued, these structures were abandoned or knocked down nonchalantly by the thousands in favour of contemporary housing. Only in the past few years has an interest in the preservation and restoration of vernacular architecture appeared. Not only for historical reasons, but because, increasingly, it emerges that these structures can be made remarkably energy efficient, breathable, weather-resistant, and eco-friendly, whilst using natural and locally sourced materials - from the stone, to the paint, to the thatch. 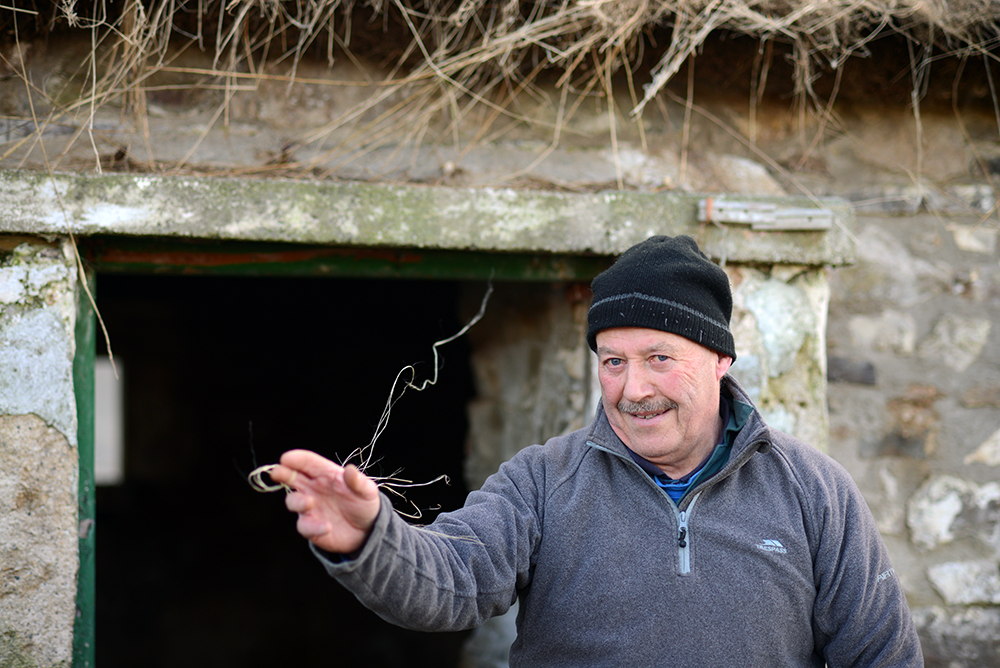 The roof, the thatcher explained, was actually flax - harvested from a local field, pleasantly soft to the touch and flexible in its unprocessed state.  Excited, I told him I often use linen yarn for knitting but had never seen it in its raw form (the thatched cottages I know all use reeds). He then showed me how flax is turned into linen thread from the raw stalks. To my surprise, not much needs to be done to it. The inner stalk is removed and the outside is combed, until it becomes ever softer and more flexible, almost hair-like. You can get it to a rough, but never the less spinnable state by hand, if need be.

On the subject of spinning, it wasn't long before talk turned to the serpentine monster behind the cottage and the challenges of conquering it by bicycle. One of the steepest climbs in all of Ireland, the Mamore Gap sits in the northernmost corner of the island, on the Inishowen Peninsula in Donegal. When crossed from north to south, it is a 2 mile ascent with an average grade of 15%. I believe the maximum surpasses 30%, but my computer gets wonky at that point so I can't be exact.

For the first time, we crossed the Gap of Mamore last September, as part of an 80 mile spin around the peninsula. My husband went up it in 34/32t, all in one go. I dismounted and walked a couple of stretches - most notably the nearly vertical section pictured. And in honesty, I don't think my gearing was at fault. My nerves gave out merely looking at the slope. Its pitch seemed so implausible, my courage failed me.

Many years ago now, the thatcher told us, there was a man who lived in the stone cottage. He owned a horse and cart, as well as a bicycle. He alternated riding them over the Mamore Gap, on his way to the town of Buncrana (and back!) every weekend. The bicycle was, of course, a black 3-speed roadster. High gearing, chaincase, the works. I gulped, despite only half-believing this story, reliving again my own trek up Mamore.

It was the first time I got off to walk on a climb in over 3 years. This had upset me at first. But later, it cheered me. There are still bits of the landscape - and in my own back yard, at that - that can reduce me to a sniveling novice. And isn't that wonderful?

There is familiarity to cycling, but also a never ending capacity for novelty. And it is this which I think keeps so many of us coming back to it - day after day and year after year.

With the very best New Year wishes, I thank you all for reading.