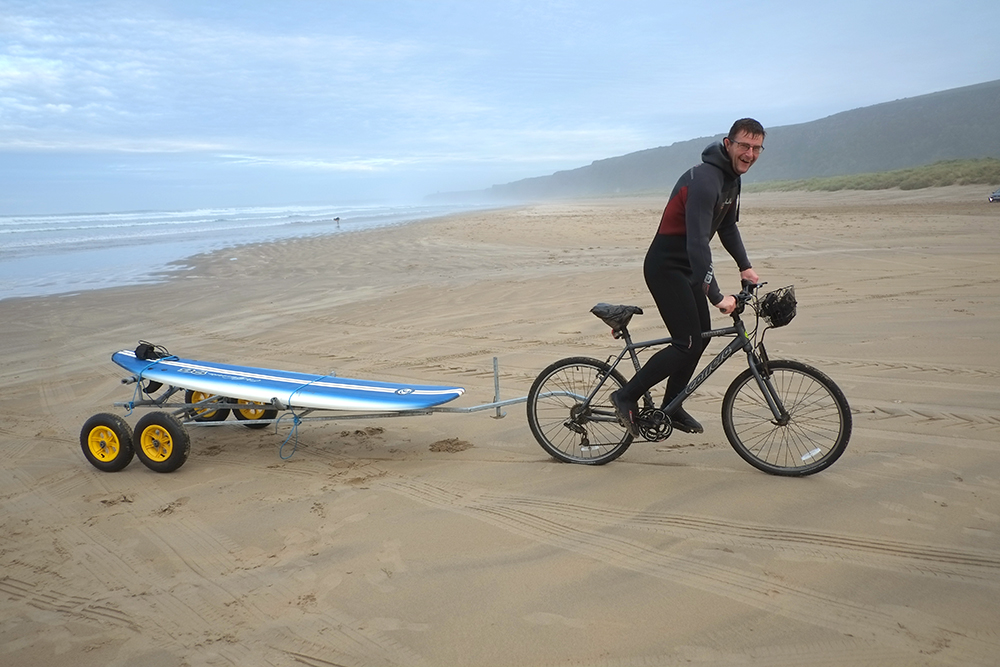 It was a bleak late-Autumn afternoon, when I found myself heading for the beach. I expected it would be too cold and windy to spend much time there, so the plan was just to see the waves and cycle back. But to my surprise, the air was warm and eerily still. The beach itself was empty. And a strange, angled glow illuminated the water, almost like a light in a photographer's studio. Standing beside the sea felt like being indoors in front of a backdrop, rather than next to the real thing. To shake the feeling, I left my bike by the dunes and walked toward the waves. It was then that I spotted something out in the water. A black figure, a surfer. I wasn't alone after all. 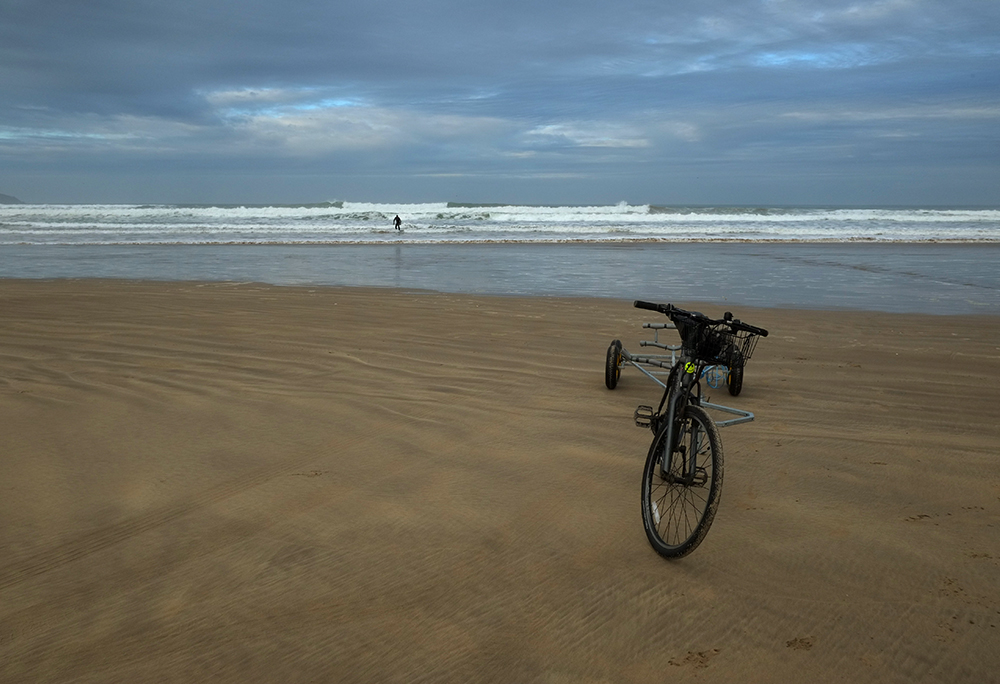 As I got closer, I spotted something else - a contraption that stood in the shallow water and, from a distance, was camouflaged rather too well against the sea-gray backdrop. From the angle I approached it at, the object resembled a long and weird sort of tricycle. But as I got closer still, I could see it in its full glory: a mountain bike connected to a long trailer. 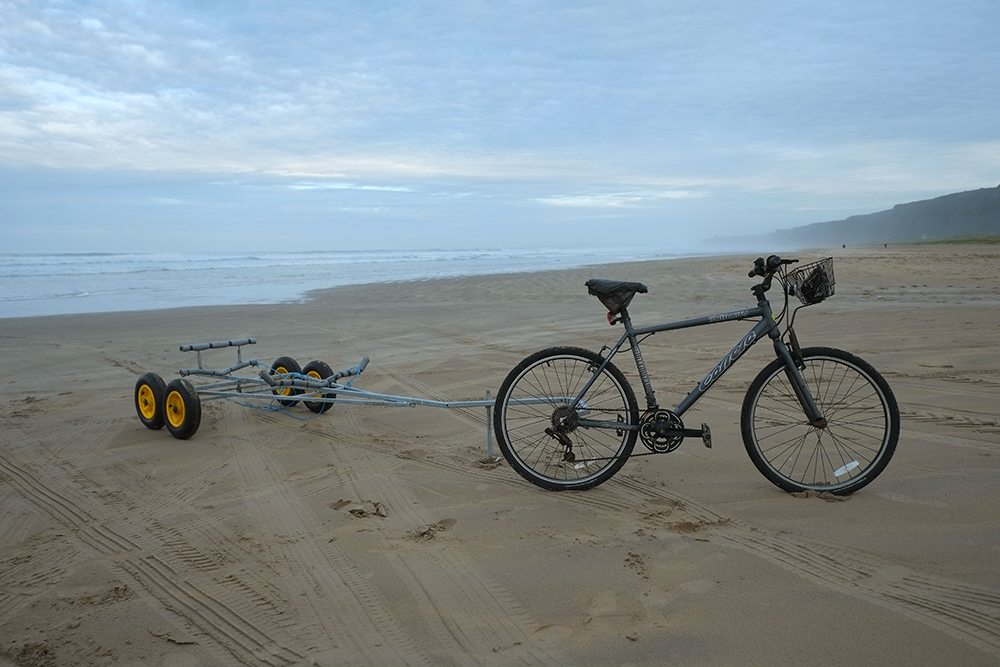 It finally dawned on me that the bike must belong to the surfer I'd seen out in the water. How cool! The trailer looked hard-core, like something designed for a car rather than a bicycle, and rated to haul more than surfboards. 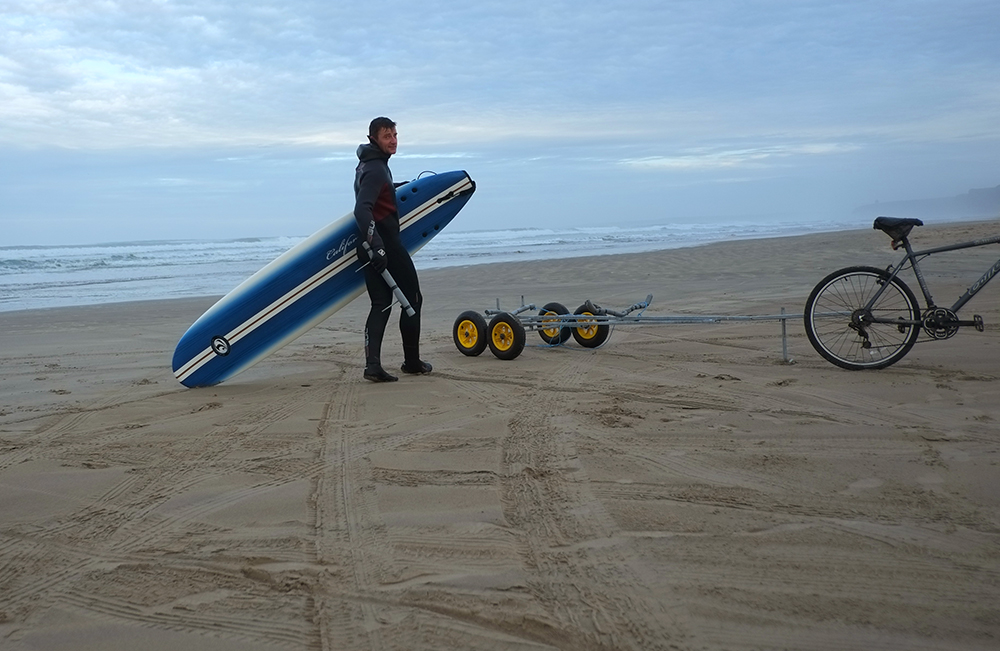 As I examined the setup, I could see that the tide was coming in and wondered whether I ought to move the bike, lest it get swept away. But I should not have underestimated its owner's vigilance, for soon the surfer was out of the water and moving his bike to safety. Then he noticed me, lurking, and he noticed my bike, and we got to chatting. 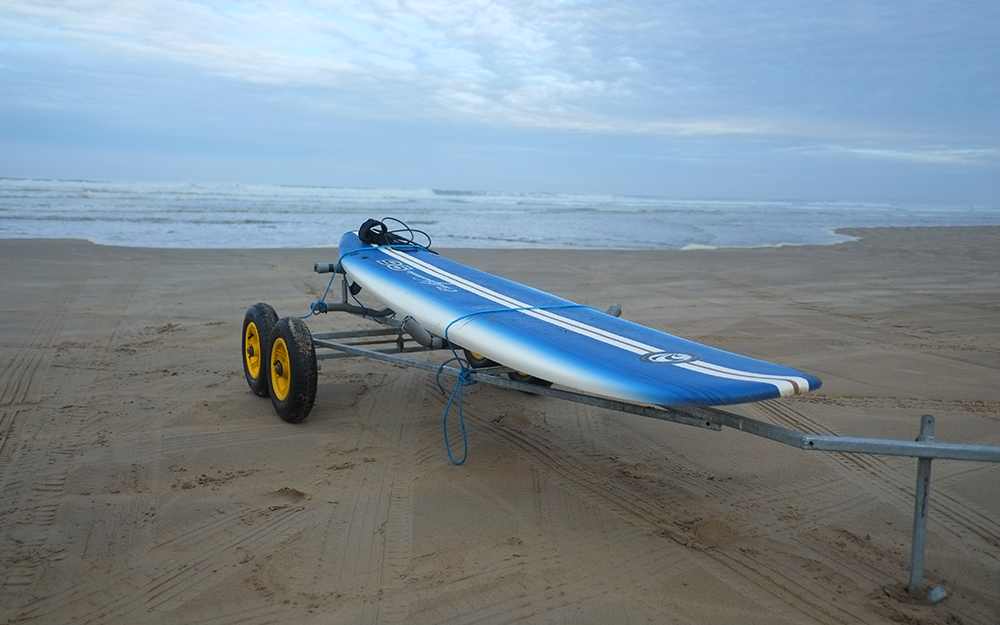 Turns out the cyclist was actually traveling light on this occasion. For the trailer's true purpose is to transport his kayak, which on this day he had left at home.

Was he happy with the trailer setup? Oh very. And he showed me how the surfboard attached and secured. Though the bicycle itself would benefit from being more weather-proof. We discussed the merits of internally geared hubs and hub brakes, for this purpose. 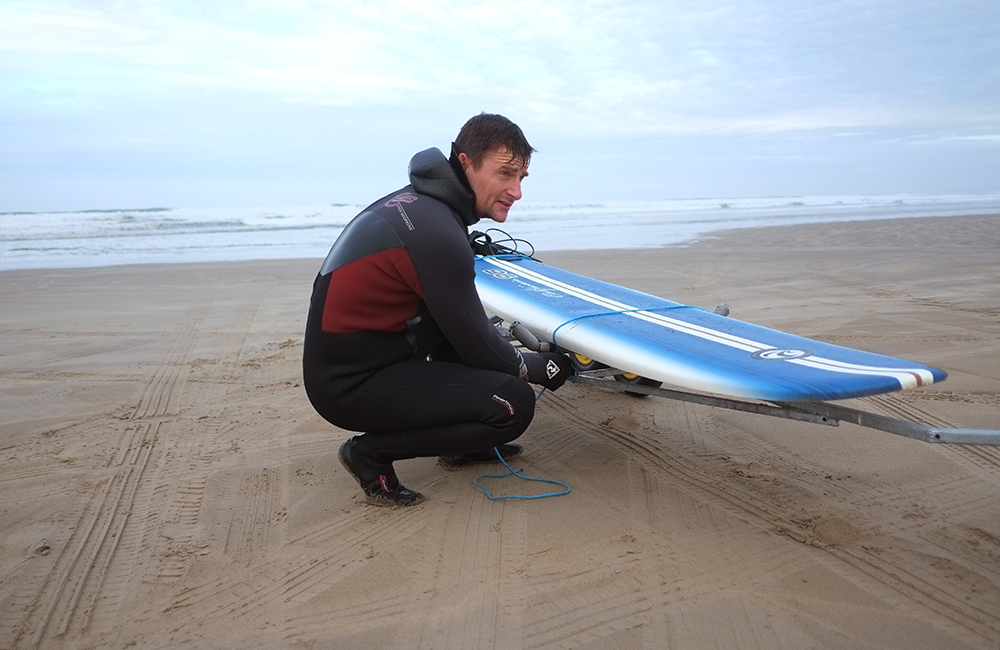 For some reason, the mere image of all this - of cycling to the beach with surfboards and kayaks in tow - made me tremendously happy. It's not that I didn't think it could be done. These objects are not especially heavy, just long, so why not. I've just never seen anyone actually do it.

"Oh you should see us in summer then," said the bicycle's owner. "There are three of us. All on bikes towing kayaks, it's a spectacle."

Oh I bet. And I pictured them, like some aquatic version of the Three Musketeers, cruising along the country roads in their wet suits, to the cheers of delighted farmers and kids playing ball out in their front gardens. It made me think of the bicycle's many uses. And of its seemingly infinite power to generate joy, even on bleak late-Autumn days.