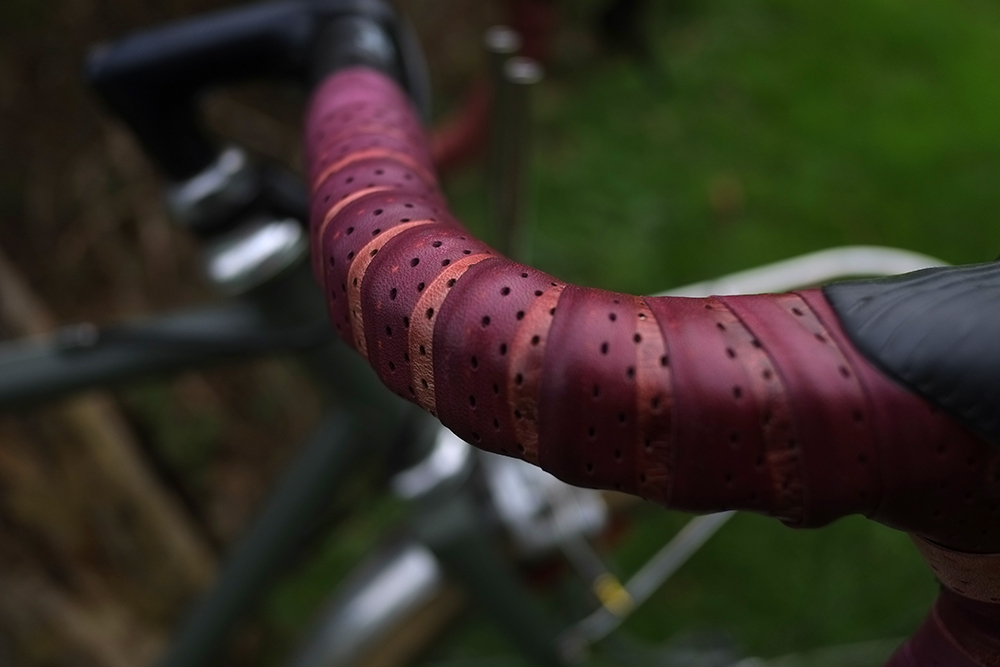 I still remember how uneasy I felt when, 5 years ago, I decided to wrap the handlebars on my nascent new roadbike with leather bar tape. It is not that I am against using leather. I have owned leather shoes, bags, jackets, bicycle saddles. But in using leather, I feel a heavy sense of visceral respect for the material. And I reserve it for products which I know will see a lot of use; products which I hope are with me for the long haul.

This is why the leather bar tape gave me pause. Me and handlebar tape... we did not have a history of long and meaningful relationships. On my previous roadbike I must have changed bar tape (cloth and synthetic variants) more than half a dozen times within a two year period. On a couple of those occasions this was because I altered my handlebar setup and the tape did not survive the re-wrap. But in the other instances, I would simply wear it out with alarming speed - destroy it with my death grip, or corrosive palm sweat, or who knows what. The synthetic cork would quickly grow filthy, then curl at the edges and tear. The shellacked cloth would crack or wear down. The microtex stuff I'd tried toward the end lasted longest, yet still grew tattered in a way I cannot account for by the time that bike made it to its new owner. 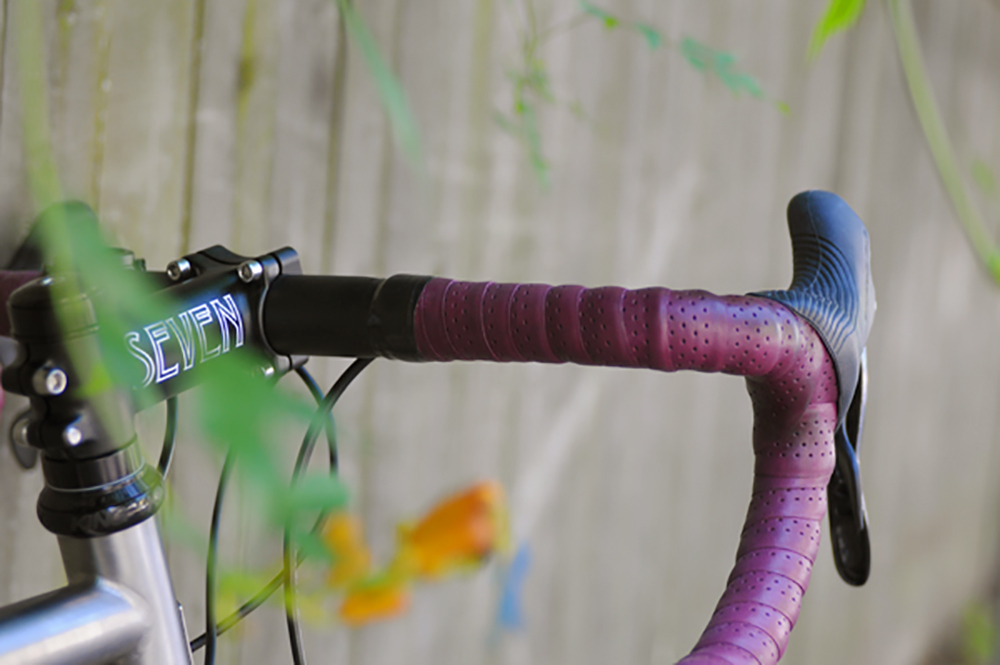 Things did not bode well for the Brooks leather handlebar tape, with its aura of organic vulnerability. But I got it anyway, the pull toward its softness and beauty winning out over my misgivings. Stifling niggles of guilt, I hoped it would last me a year, which would certainly have been a record.

It has lasted me nearly five years so far.

The bicycle this tape was on, was my Seven Axiom - the bike I have put by far the most miles on of any bicycle I've owned. And after all those thousands miles, in the heat, cold, sun, rain and snow, the only signs of wear this tape showed was colour fade. 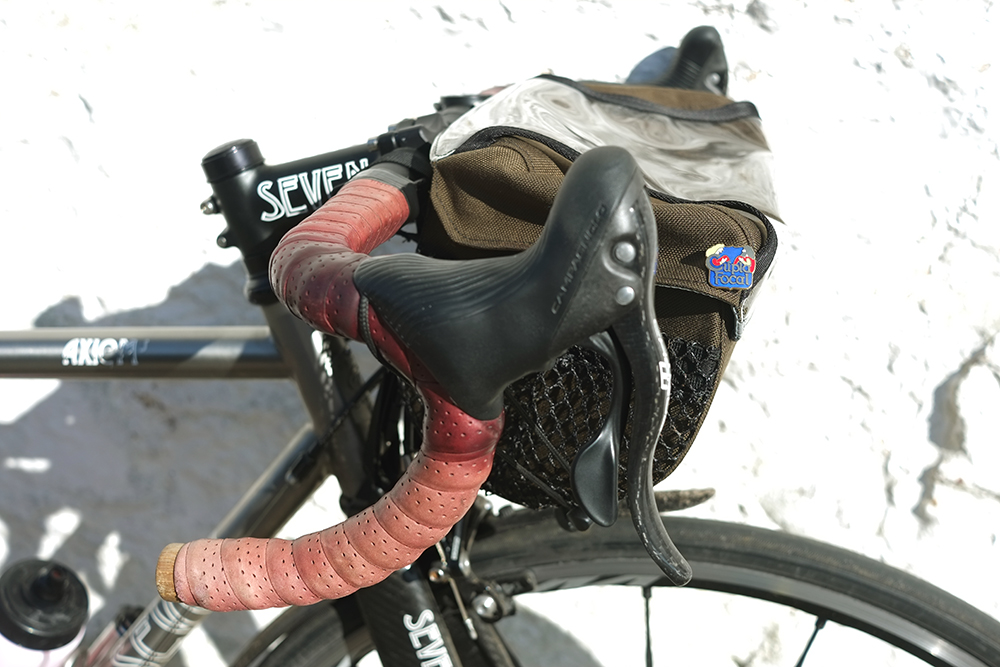 While the tape isn't waterproofed with any sort of treatment or top layer, I have found it untroubled even by heavy rain. To the scorching sun it is more sensitive.

The fade happened gradually. Having started out a dark and saturated violet, the colour moved toward a toned-down mauve in its first year of use. Then, slowly, over the following years, toward a bleached brownish-taupe.

A couple of months ago, I disassembled my Seven Axiom. Its frame being in transition, I "loaned" most of its components to another bike. And as I took apart the handlebar setup, I fully expected the bar tape to crack and rip. Instead, it unraveled with a graceful elasticity, revealing its hidden stripes of still-pigmented purple underneath the bits that faced the elements.

With renewed love for this long suffering bit of dressing, I transferred it to my 650B DIY bike. I was hoping for a neat stripey effect. The kind that some manufacturers produce deliberately. But the discoloration was too varied for that, and instead I got some rather half-hazard streaks of violet and brown and taupe.

Compared to its original state, it has now also attained a sort of glowing sheen - brought on, I am guessing, by years of greasy handling. It was almost as if the very things that destroyed every other bar tape I've used, have made this one thrive. 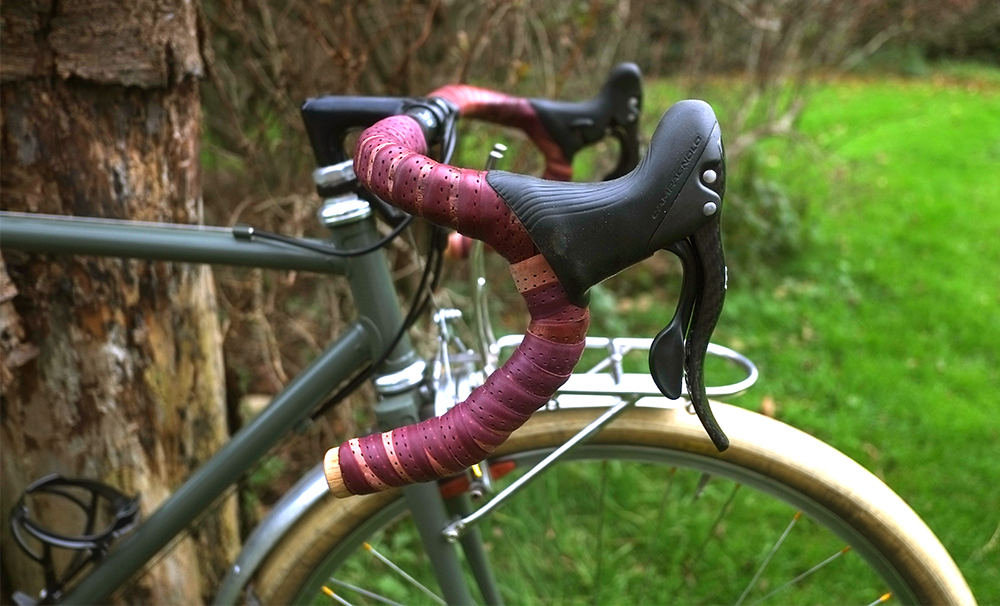 When I first got the Brooks leather bar tape, it had been an un-tested novelty. Now that it's been around some years, you will find all manner of feedback. Mainly: it is praised for its stretch and reusability, criticised for its colour-fading and price. Make of that what you will, and you now have my feedback to add to the mix. I should note that Brooks now also offers non-leather models: Cambium rubber bar tape, and microfibre bar tape.  I have not tried either and can't comment on their qualities.

How much life does my tape still have in it? I have no idea. But I'll take whatever it's got to give. And I've now replaced the tape on my other two drop-bar bikes with its siblings, in different colours. The cost works out less in the long run. And the leather gets lots of use, and lots of love.