What Goes Up Must Come Down 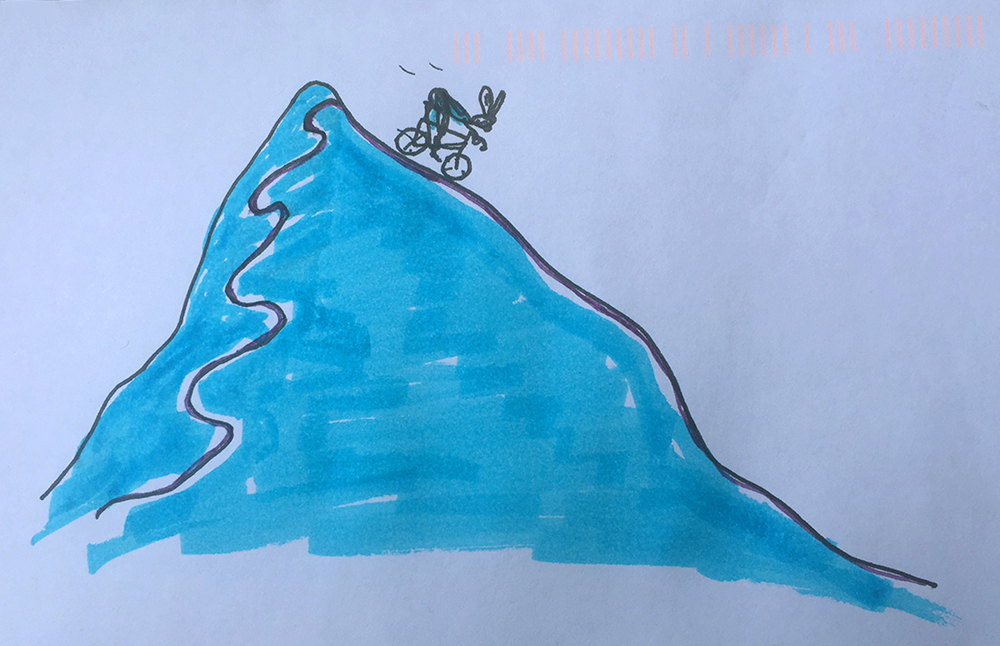 Admittedly, my experience with mountain climbs is far from expansive. But the ones that are local to me seem to follow a distinct pattern. I've attempted to illustrate it for you in this highly technical drawing.

Since mountains are rarely symmetrical things, it is often the case that one face is steeper than the other - sometimes dramatically so. And should a road happen to cross the mountain, it is likely that the stretch along the steeper face will have different characteristics than the stretch along the face with the more gradual incline.

Now, a cyclist seeking to climb (and, eventually descend) a mountain, is faced with a choice of which direction to tackle it from: Ascend via the straight gradual incline and descend the steeper twisty bends, or the other way around?

Around here, it is considered that the former is the easier method. A nice steady climb followed by a "fun" twisty descent? Why that's nearly cheating! More challenging is to endure the pain of climbing the steep twisty bends, only to descend in an endless, monotonous manner.

For me, however, it is exactly the opposite. As difficult as a climb up the twisty steeper face may be, it pales in comparison to my terror of hairpin descents. For a while it used to be that the very sight of a steep tight bend downhill would launch me into full anxiety attack mode, complete with flash-sweats, trembling and tears. As my handling skills improve, I'm at least able to descend stretches where I would previously have walked. But the experience remains so stressful, I prefer to avoid it if possible.

So, while I get some local street cred (farm lane cred?) for always climbing in the "difficult" direction, it is entirely undeserved, as I do this out of necessity. What goes up must surely come down, and I want to come down the easy way. Far from finding the long even slope monotonous, I enjoy the time it affords me to examine the view, and the speed I can pick up without the worry of upcoming bends. Beyond all that, there is an otherworldly dreaminess to a long, steady descent, that I find incomparably beautiful. And I suppose, like beauty, the notions of what is easy and difficult are in the eyes of the beholder.

What is your preferred direction for climbing and descending mountain roads: Steep and twisty up, or steep and twisty down? Or are you one of those sickos who needs to ascend it from both sides, to feel as if you have truly conquered a climb?