It’s Not the Length of Your Stem. It’s What You Do with It. 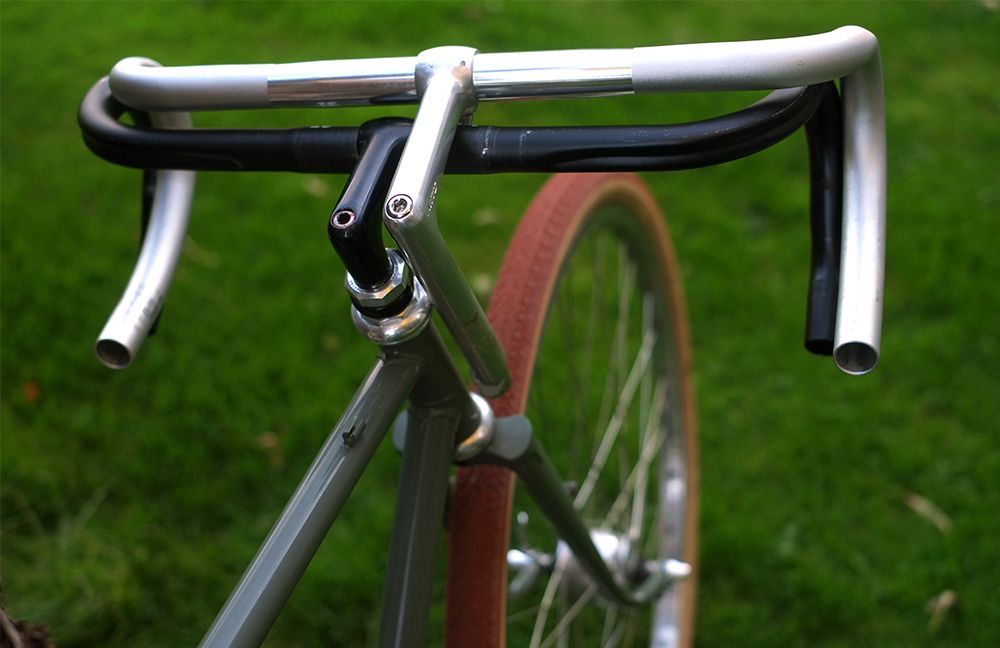 If we look at some overall trends in today’s roadbike setups, there is an undeniable preference for long stems. For most male cyclists I know, a stem length of 110-130mm seems to be the desirable range, with anything shorter considered suboptimal, if not outright weird.

Now, if you ask a rider to explain this preference for length, chances are they will tell you it is to do with handling, as it “puts them over the front axle.” The problem with this statement, is that the location of the rider’s hands in relation to the front axle does not depend on stem length alone. Rather, it is a function of stem length and handlebar reach, which can vary greatly from one set of handlebars to another.

I am reminded of this as I mess about with the front-end setup of my DIY 650B bike, which is currently undergoing a makeover …a makeover that has made me aware that I too am far from immune to the “longer is better” stem bias. 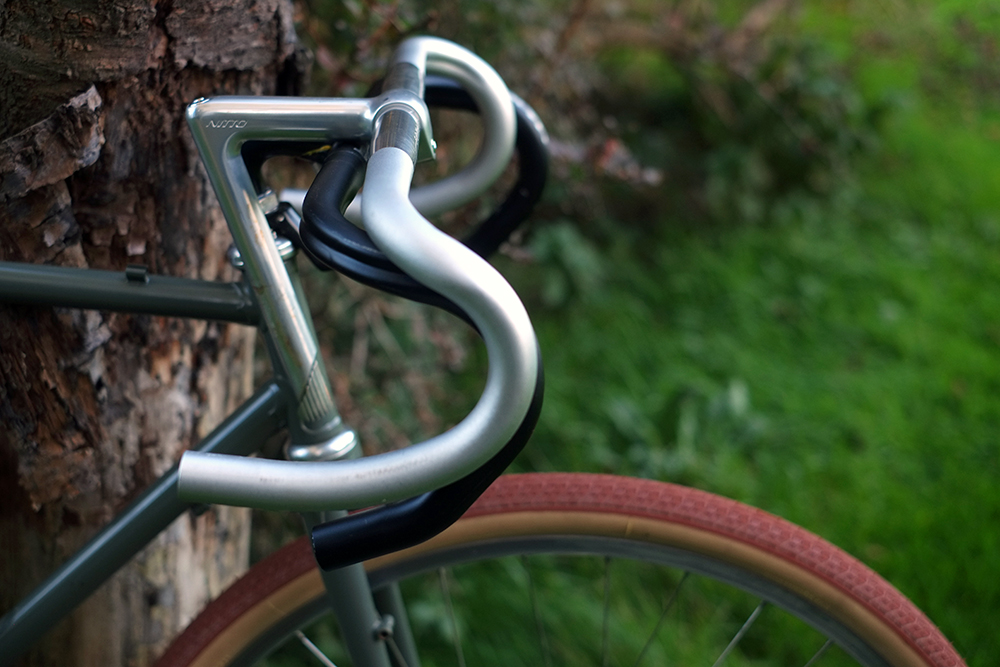 When I assembled this bike originally, it was during a visit back to Boston. I was in a hurry and had no money to buy new parts. So I fit it with whatever spare stem and handlebars were laying about in my old apartment, which happened to be a 11cm Nitto and a set of super-compact Soma Hway1s. It was never an ideal setup. The stem was 1cm longer than the length I had designed the frame for. And the shape of the bars wasn’t quite what I had in mind for that particular build. So a few months back, when I swapped over the bike's drivetrain, I decided to also change the stem and handlebar setup.
The “new” (well, actually old; but new-to-me) handlebars I am going with are a set of 3T Prima199s. Not only is their bend significantly different, but they have quite a bit more reach (i.e. more space behind the hoods). To compensate, I knew that I would need a shorter stem. But how much shorter?
Well, I hate math. But let’s do some math.
My old, compact bars had 75mm of reach. And I used them with an 110mm stem. So my overall reach to the hoods and/or outer drops was 185mm.
The new bars have 95mm of  reach. To maintain the same overall 185mm reach to the hoods ad/or drops I would need a 90mm stem.
But wait. Because, the thing is, I wanted the bike to have a tad less reach overall. Which meant that I needed an even shorter stem.
"An 80mm stem?! Oh no, that’s too short!” I heard myself say, before I could stop the words escaping my mouth.
Clearly I too have succumbed to the long stem bias.
For days (okay, more like a couple of months), I stalled while the bike stood disassembled, trying to think up reasons why perhaps I didn’t want shorter reach after all, unwilling to admit that I simply didn’t want to put an 80mm stem on my bike because I thought it was uncool.  As it often happens in such cases, my mind then proceeded to conduct a psychotherapy session on itself.
“Tell me… Why are you so reluctant to accept that you need an 80mm stem? What would an 80mm stem mean to you?"
“It would mean… "
"Yes?"
"It would mean..."
“Yes, what would it mean, for heaven’s sake?”
"Okay, I guess it would mean I had made a mistake in designing the bicycle frame; miscalculated in determining the optimal frame dimensions.”
“And why is that?”
“It just seems standard to design a bike for a 100-110mm stem these days."
"But what kind of handlebars does that standard assume?”
“Compact bars.”
“And are you using compact bars?”
“No.”
“Interesting…”
"Oh shut up!” 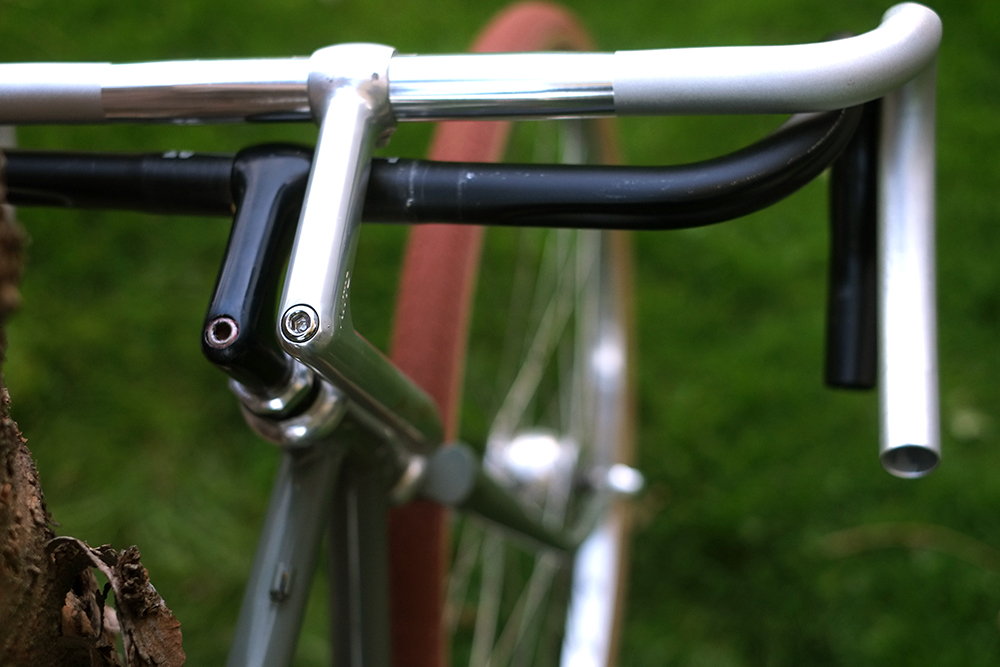 Anyway. In the end I got a grip, and snagged myself a sweet 80mm Cinelli XA.  Not only was it a bargain (shorter stems not being especially desirable, and therefore typically selling for less on the used parts market), but the new bars plus stem setup is practically weightless.
And the reach? Well you can see for yourself in the pictures. The reach to the hoods and outer drops is a mere 1cm shorter, if that, which is exactly what I wanted. And yes, I am over the front axle.
When folks today talk about stem length, I notice they seldom take handlebar reach into consideration. For that reason alone I think it's fair to suggest that the trend for longer stems is largely aesthetic. And I guess there isn’t really anything wrong with that ...Except in cases where a rider might benefit from long-reach handlebars, but will go with compact bars instead only for the sake of sporting a longer stem... which, I daresay is kind of silly.
Just remember, it’s not the length of the stem alone that determines your reach. The handlebars you use play an equally crucial role. Relaxing about stem length can open up a world of possibilities beyond the constraints of compact bars.
Labels: Alice bike fit DIY