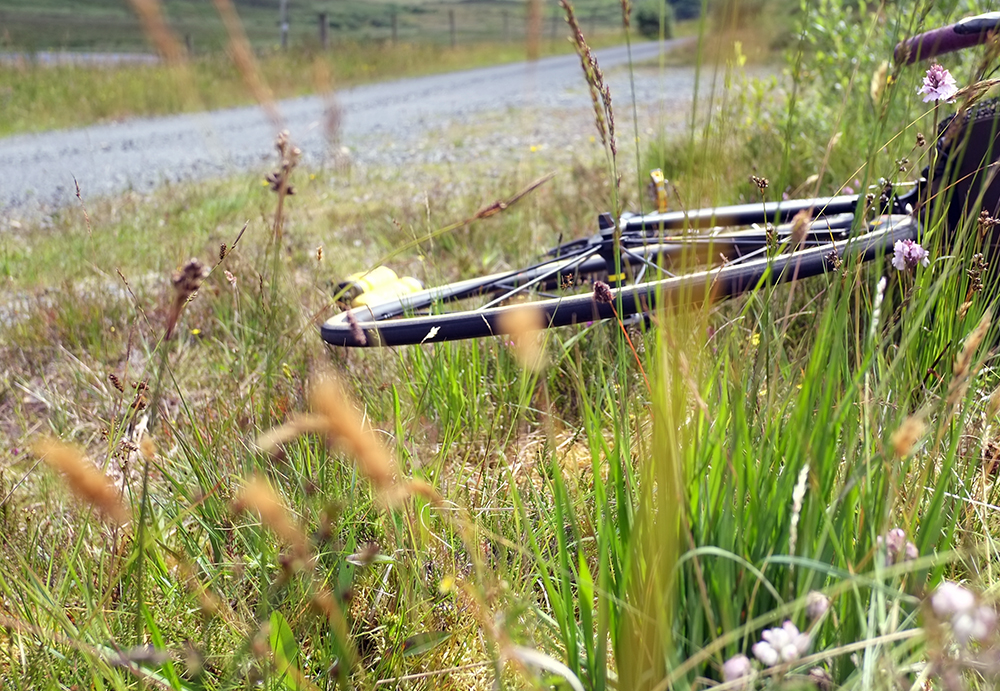 Firstly, a warning. This post is a product of months of obsession. As such, it is a little technical. And more than a little tedious. And of limited interest to anyone who doesn't live in a part of the world plagued with crazy, un-cyclable wind conditions. Nevertheless, crosswinds really are a big deal for some of us. And as it took me three years to stumble upon a solution, I wanted to share my recent experience.

It began when I started to ride a prototype bike for a project I'm working on with Seven Cycles. Until then I had been content to leave well enough alone. Which is to say, I had come to terms with being unable to ride my (lightweight, modern) roadbike in extremely windy conditions, when the cross-winds would get so bad they would blow me off the roads. I had mentioned this problem to several industry contacts since my move to Ireland; I have even written about it here. Over time I received a lot of advice. And while much of that advice was conflicting, two factors were mentioned again and again as potential culprits: (1) deep rims, and (2) light weight.

Since my own roadbike was not equipped with deep rim wheels (the Mavic Ksyriums I had used from 2012 onward have 22mm rims on the front, 25mm on the rear), I concluded it must be the weight - both of the wheels and the bike itself. It seemed logical enough to accept that a lightweight bike would get blown about the road more than a heavy bike. I would just have to live with not riding it on extremely windy days. 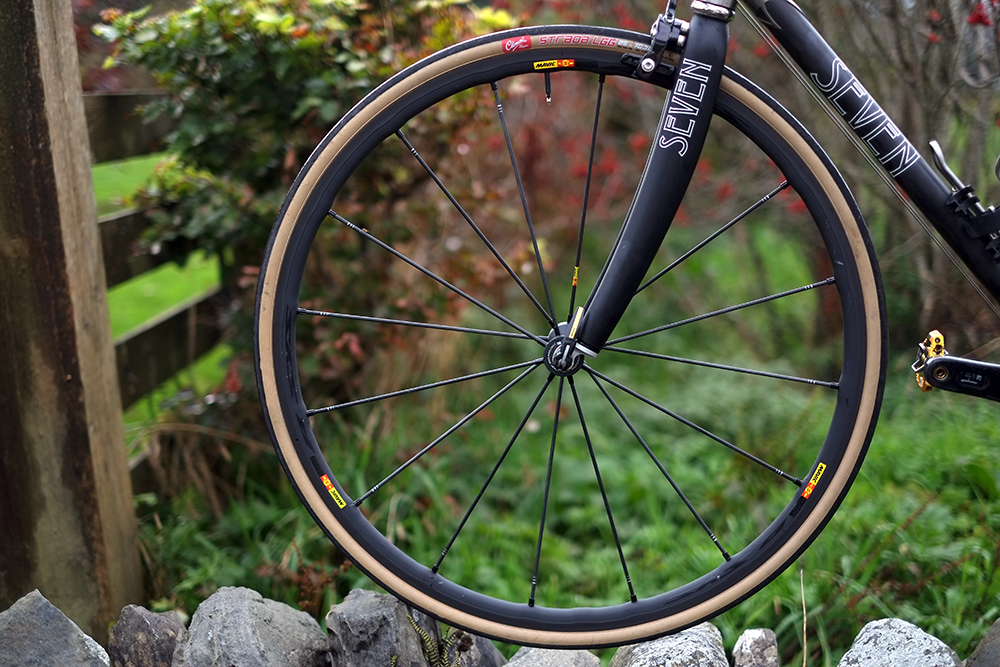 Then the project bike arrived. With its Ti-carbon frame and medley of lightweight components, it was lighter than my Axiom by a good 2lb. When I expressed concerns about this in relation to cross-winds, one of the engineers at Seven suggested that a specific set of wheels - Mavic's R-Sys model - might help. I was cautiously optimistic.

The wheels didn't help. They got rid of the problem entirely.

I could hardly believe it at first and it took me some time to trust the bike on increasingly longer rides in bad weather. But time after time, it really did seem impervious to sideways gusts. Not only compared to my lightweight modern roadbike, but compared to all my bikes, including much heavier ones. So much for the "heavier is better" theory.

There was one time in particular when I was testing the proto bike with its magic wheels, and got caught on a mountain pass just as the weather turned. The wind blew directly from the side at over 20 knots along the exposed road. I prepared for the possibility of having to dismount and walk. But while I felt the wind's force on my body, the bicycle seemed not to care. The front wheel went where I wanted it to. And the bike stayed planted on the road.

It can't be the wheels, I thought at first, and looked for other explanations. The magic-wheel project bike, designed by me, had low-trail geometry. So perhaps it was that rather than the wheels? But fitting the wheels on my Axiom (with mid-trail front end geo) yielded the same results. It was indeed the wheels.

The realisation was frustrating to accept. It felt foolish to have struggled against crosswinds for 3 years not realising that the right set of wheels could instantly fix the problem. But also, Mavic R-Sys wheels are expensive. There had to be an alternative! What I hoped for, was to figure out what it was about these specific wheels that made them so good at resisting crosswinds, then look for those same features in a more moderately priced wheelset.

One thing that immediately struck me as odd, is that the R-Sys and Ksyrium models reacted to cross-winds so differently despite their identical rim depths. The biggest difference I could see, was that the Ksyriums used bladed spokes, whereas the R-Sys used mostly round ones (round on the front wheel, round and bladed on the rear). Were round spokes the answer? 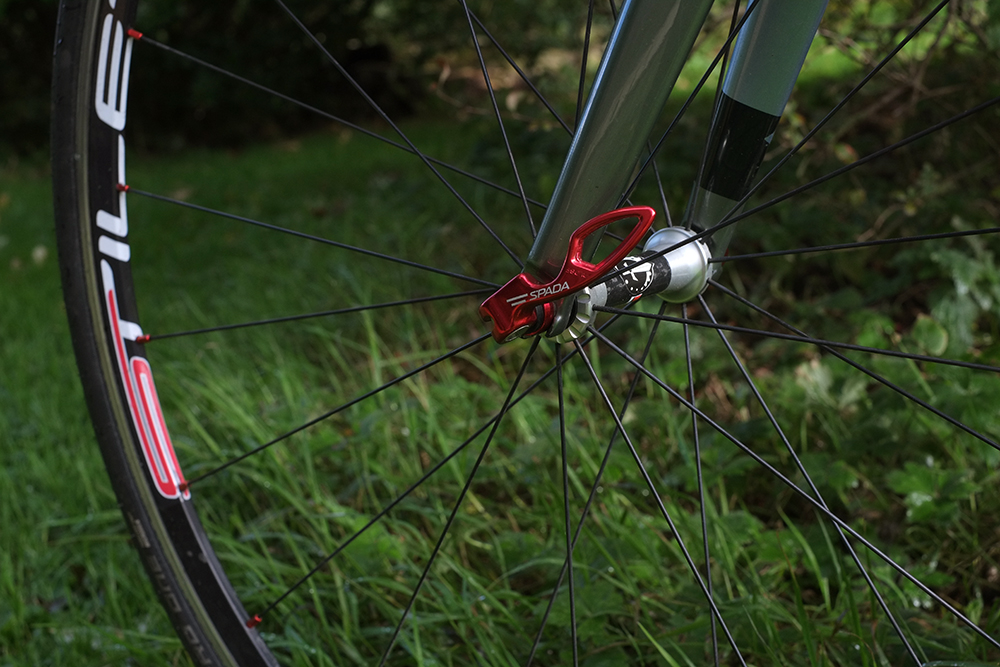 As it happened, we soon had a set of modern performance wheels with round spokes in the house, from the sexy Italian builder Spada. I tested them before they went on one of my husband's bikes. Our impressions were similar: The wheels rode like butter. And they were certainly better at resisting crosswinds than the Ksyriums. But still not as good as the Mavic R-Sys. Despite having round spokes and lower profile rims.

More surprisingly still, the Campagnolo Zonda wheels, which my husband had acquired for another build, beat the Spadas in the cross-wind resistance department, despite having bladed spokes. 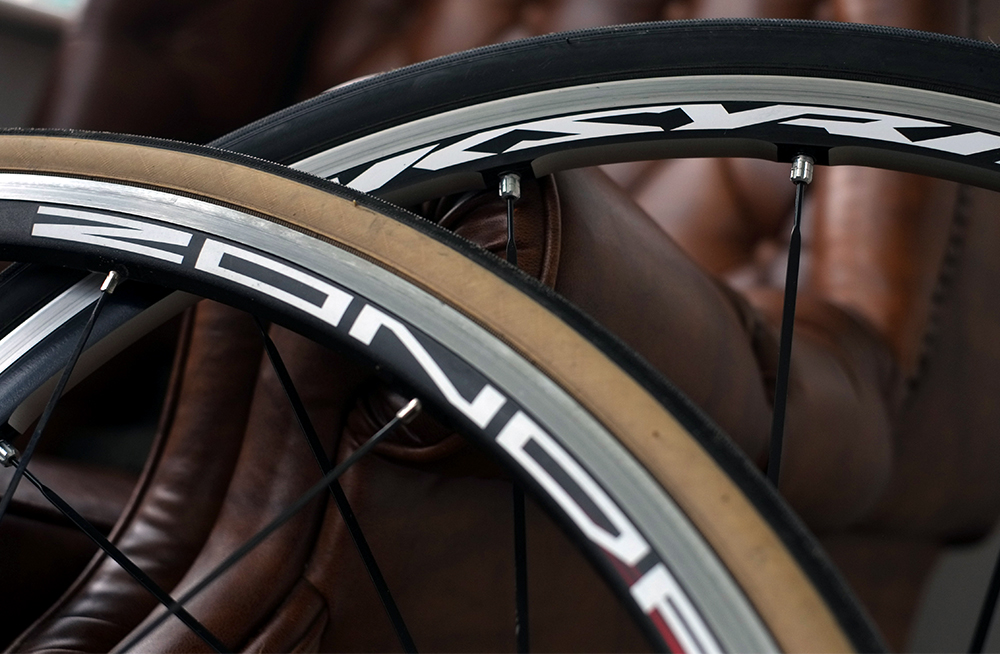 This last bit in particular surprised me. Comparing the Campagnolo Zonda and the Mavic Ksyrium wheels side by side, they looked of the same ilk. Their weights, rim depths, spokes, were all very similar. So where was the difference coming from?

I thought about this for some time and could not come up with an answer. 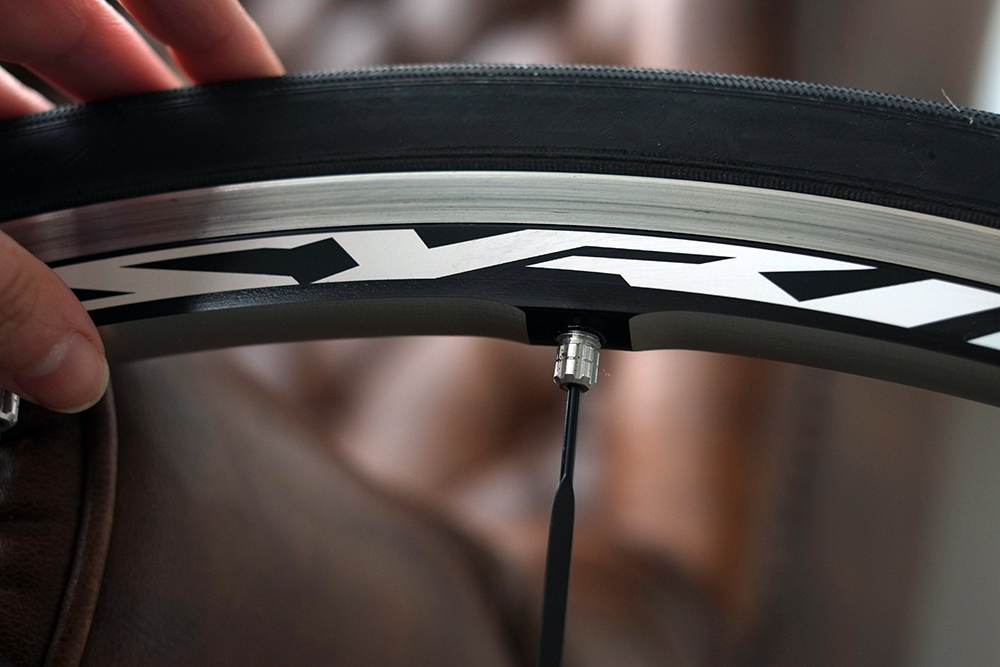 Then one day, as I ran my hand along the Ksyrium rims while cleaning them, I noticed something interesting. The Ksyrium rims have a very sharply squared-off edge to them.

The Zonda rims have an edge that, to the naked eye looks similar, but in fact is ever so slightly rounded. The edge on the Spada wheels was somewhere in between the two. This alone seemed to be making a difference. A bigger difference than rim depth, and than whether the spokes were round or bladed. 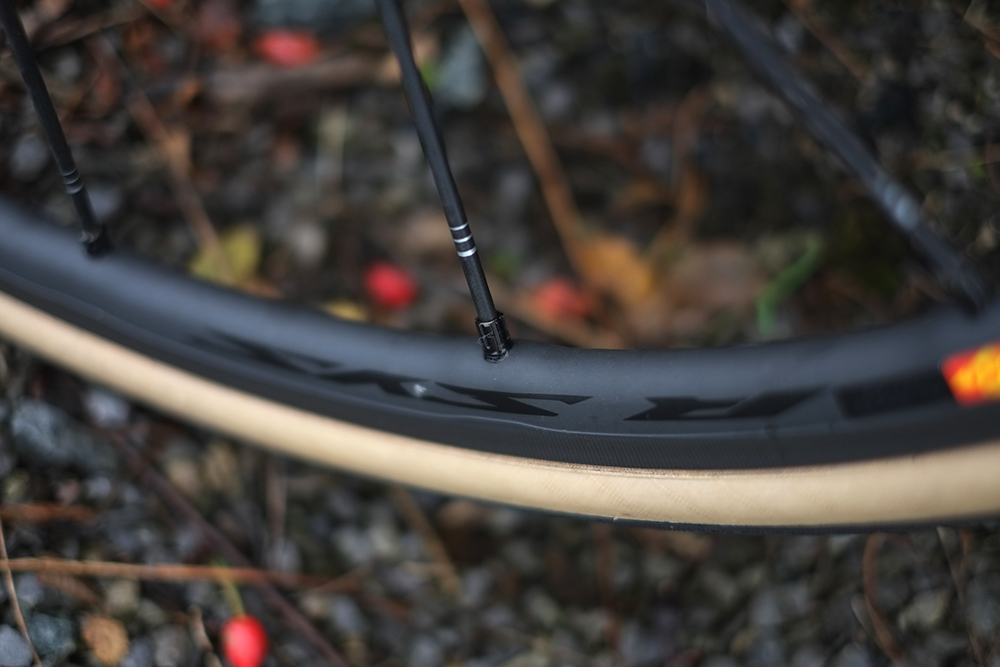 I kid not when I say that I grew a little bit obsessed over this. I even made a chart (and I never make charts! I mean, for godssake!) where I listed all the wheels that we had in the house. I labeled them according to weight (now I appreciate the husband recording these figures!), spoke shape, rim depth and rim shape. Then I gave each a "crosswind resistance score" on a scale from 0 to 10, with 0 being "wind is unnoticeable" and 10 being "bike becomes unridable."

The score corresponded most strongly with rim shape, where the more rounded the rim the more crosswind resistant the wheel. The shape of the spokes and the depth of the rims seemed to play comparatively marginal roles. And the weight of the wheels seemed to matter not at all.

But what to do with this information? After doing some research, I learned that the Mavic R-Sys wheels are actually rather unique in their combination of features in today's market. It seems that nobody really makes lightweight performance wheels with the qualities I am looking for anymore. 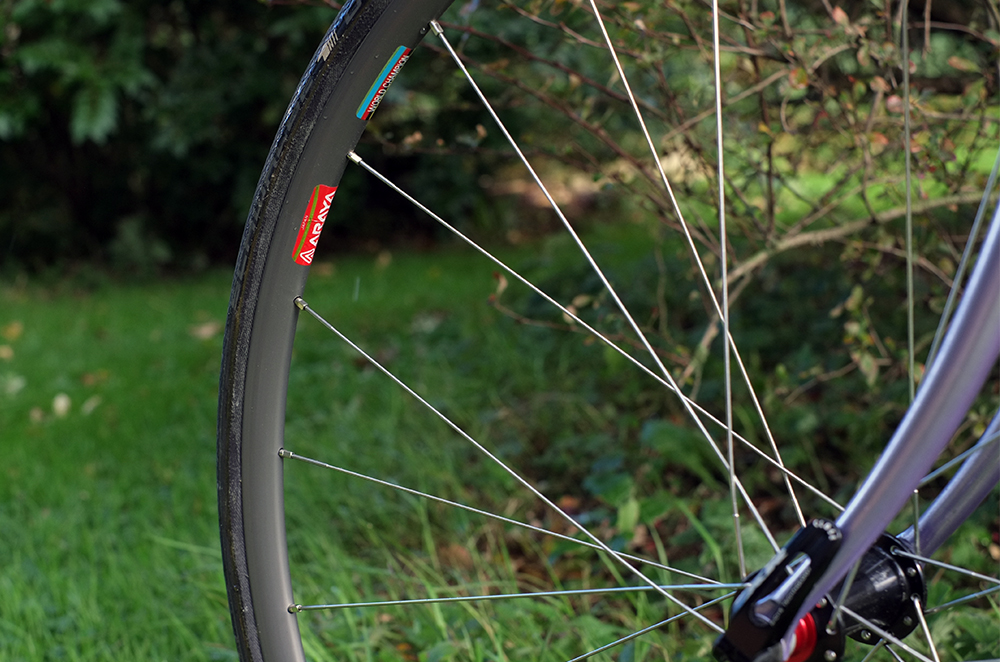 So the solution turned out to be old-school. What I have ended up with, is a set of positively scrumptious DIY wheels, built for me by an acquaintance (more on this later). They look "vintagey" but are shockingly lightweight, having been build with carefully selected parts and a low spoke count. They are also remarkably cushy, quick rolling, and fantastic at climbing. With their rounded, low(ish)-profile rims and round spokes, they resist crosswinds on par with the Mavic R-Sys for a fraction of the cost.

Oh, and they're tubular! But that too is a topic for another time. For while my crosswinds problem is solved, my wheel education has only just begun.