What Happens on Ventoux 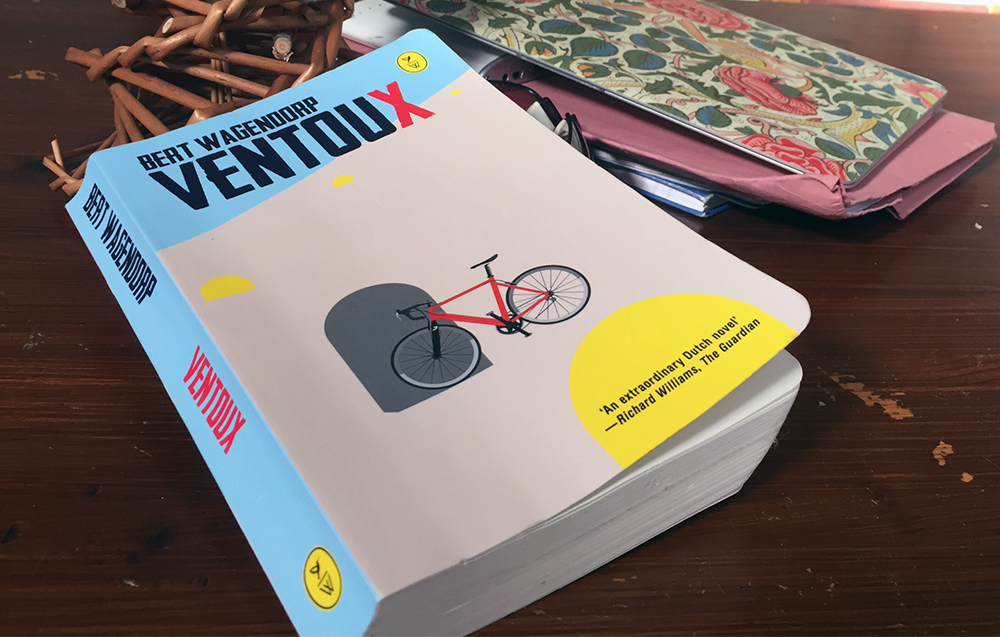 In this alone, Bert Wagendorp's novel Ventoux was at a disadvantage before a word of it was ever written. Cycling. Dutchness. A mountain touched by tragedy. The danger of high expectations loomed large.

As if to inoculate against this, the publisher of the English-language translation chose a cover design that communicated such peppy lightheartedness as to almost suggest a how-to guide, a collection of inspirational quotes, or a humorous tale of two-wheeled hi-jinx. None of these being qualities that draw me to a book, Ventoux sat on my shelf until, under threat of an arduous train journey, I finally gave it a go - only to come full circle and discover that it was indeed a Dutch novel of the most Krabbéan (Krabbé-esque?) kind. A slow, morose psychological thriller, with cycling playing a prominent role. It was also unexpectedly sexual. In fact, if there is one thing The Rider lacks that Ventoux is chock-full of, it is "that."

So here is the gist of the plot (and I am not giving anything away here that isn’t printed on the back cover): In the 1980s, a tightly knit group of Dutch schoolmates decides to cycle up Mount Ventoux as a way of marking their high school graduation. More accurately, only two of them actually cycle. The rest join in for the camping portion of the trip, then follow along in a van for the actual climb. But that detail isn’t important.

The friends have a strange dynamic between them, as four are boys and one is a girl. Naturally the girl is exceptionally beautiful. Conveniently, she is also just ever so slightly off, emotionally - which keeps her away from the popular crowd at school and steers her toward the somewhat more geeky foursome. Of course all four boys are in love with her. She, in turn, gives hints of being a little in love with each, albeit in different ways. There is a strong undercurrent of Stephen King’s It here (the book, not the movie), and I half expect her to channel the actions of Beverly in the way she relates to the boys. While this doesn’t exactly happen, it’s not too far off the mark.

From the start, the Ventoux trip is marked with a tense, confused atmosphere. And then one of the boys - the most charismatic and talented one, essentially the group’s leader - is killed on the descent. The remaining friends scatter in shock - not to be reunited until three decades later. What brings the estranged bunch together at that exact point in time is not explained altogether convincingly. But events align, the dreaded Facebook plays a prominent role, and their exaggeratedly different life paths (a criminal, a journalist, an award-winning scientist...) converge once again.

Coincidentally, it turns out the former friends had all returned to cycling again in their 40s. And so the idea is born to repeat the tragic trip of their youth as a way of bringing closure to their mate’s death. As the story progresses, however, one gets the sense that what they really seek closure for, is their unfulfilled romantic yearnings. They want answers from the woman in the group. Which one of them did she fancy back then, if any? Was it the dead boy she loved, or one of the men still alive?

By the end of the reunion trip, this question is answered. And with an unexpected twist.

Weaving back and forth between past and present, the entire novel is really a long and slow buildup to the ending, which is meant to come as a shocking revelation (the back cover says so). In the end - and, a bit of a spoiler here (but not really) - there are actually two revelations. First a secret is revealed that reframes the way the group sees their past friendship. And then, just when it would seem we’ve crested the story’s apex, an even bigger revelation follows.

The first of these surprise twists, I admit, I could not have predicted. But that was only because it was such a weird thing. I am not even sure it is relevant to the storyline, to be honest. And I am also not sure that it packs as much shock value as the author seems to intend (maybe it's a generational thing, but growing up in the '90s it was not uncommon for brainy, lonely teenagers to have some pretty messed up relationships).

In contrast, the final revelation was really too predictable and clichéd. In fact, it came as a surprise only because I doubted the author would conclude with something so obvious. But conclude with it he did, hastily wrapping up with an improbably tidy and happy ending.

So what sort of novel is Ventoux, and will you enjoy it? That's a hard question to answer. The story in of itself is potentially interesting. I am just not sure that potential is realised. The writing style comes across as confused. It cannot seem to settle on a tone - darting unevenly between darkness and humor, irony and earnestness. Situations and scenes are over-explained, so that at times it reads like a novel for young adults (again Stephen King comes to mind: imagine a blend between The Body and It - only with bicycles). At other times it reads like a movie script hastily reworked into a novel - which, I later learn, is precisely what it is. Well, at least that puts it into context.

That said, I still found Ventoux an engaging read. And that is largely because of how true-to-life and contemporary the parts to do with cycling feel. There is talk of vintage 10-speeds, and tubulars, and custom framebuilding. There are funny scenes of men past their prime sucking in their Rapha-clad tummies whilst checking their i-phones. There are interesting asides on the role of Ventoux in cycling lore, as well as at least one fine description of the actual climb that made me want to attempt it myself.

Oh, and there's Dario Pegoretti. He is mentioned a few times actually, as one of the main characters commissions a handbuilt frame from the Italian builder ("only the best!"). Truth be told, that was probably my favorite part of the book.

If you are of that generation who raced as a youth in the '80s, then returned to cycling again in your middle age, in wonderment of how the scene has changed, Ventoux is full of references you may find relatable. I am not sure that is enough to carry one’s interest through the main storyline. But possibly. And if not, I think the film is available with English subtitles. It may even feature a Pegoretti.

.....
The English translation of Ventoux by Bert Wagendorp was sent to me for review by the publisher. If you are on the islands of Great Britain or Ireland and would like this book, say so in the comments and I will pick a recipient at random.