The Plastic Bag Incident (Or, Why There Is Hope for Bicycles Yet) 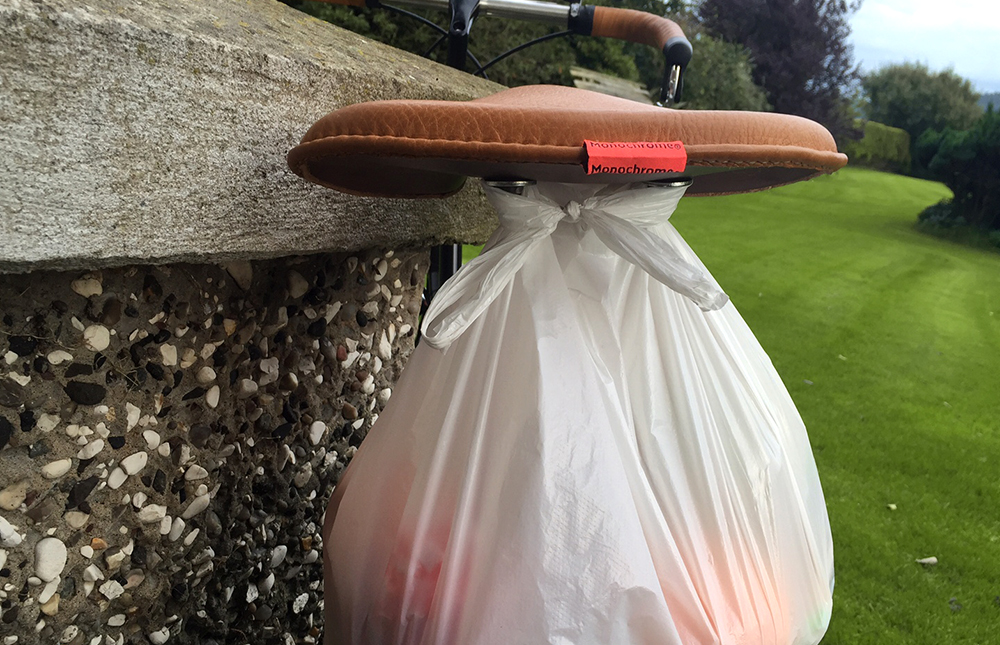 The other day I had occasion to stop by a large supermarket in Co. Derry, where I had not been in some time. In the soft fluorescent glow, I wandered its abundantly stocked aisles and grabbed a couple of things that I needed, then headed for the till. The cashier rang me up, placing the items I bought in a pile at the corner of the register.

“Could I please have a bag as well?” I said, handing her the money.

She gave me a look so nuanced in its shades of contempt, suspicion and disappointment, it would have given a Soviet-era Univermag cashier a run for their money.

“Is it a plastic bag you want?”

“They cost extra, you know,” she said, in a tone that hinted she doubted I had the money.

And as she tossed the flimsy receptacle in my direction, my heart swelled with joy.

“I’m sorry,” I said, beaming at her stupidly, as I scrambled to pack my purchase, “I usually bring my own bag.”

And that, dear readers, I do. But it is hardly the point.

The point is how astonishingly different the behaviour I encountered on this occasion was from the way things stood when I first arrived in Northern Ireland 3 years earlier. Near to where I lived at the time, this particular supermarker was one I used to visit regularly. By default, the cashiers would cheerfully place a heap of plastic bags onto the register. And any protests of “No thanks, I have a bag” would be met with genuine confusion - with pitying looks that said: (1) Well, that’s a bit weird to carry your own bag! and (2) Surely you still want these wee plastic bags as inner bags? you know, to keep your nice bag from getting dirty?

I have written about encountering the same attitude in the US some years earlier. But the bag-pushing cashiers in Northern Ireland were both friendlier and more insistent, making it a true challenge to emerge from the supermarket plastic bag-free.

When I pointed this out to some local friends at the time - as part of a general conversation about plastics - they said something to the effect of “Good luck trying to get people here to stop using plastic bags and drinking out of plastic bottles! It’s part of the culture."

Part of the culture, eh? Well, then it is all the more remarkable to now see the attitude reversing. The most interesting part, is that the cashier wasn’t just following the new store protocol. She was actually judging me on a personal level, having internalised the "asking for plastic bag = bad; bringing reusable bag = good" narrative.

But enough about bags. Because what I'm really trying to say is: Attitudes change. Cultural practices change. Societal norms are not eternally fixed, but in a constant state of flux.

Which is why it amazes me how often the faux logic of impossible-to-change local ways is used to argue that cycling culture can never take off here (insert your city/ town/ rural region of choice).

In theory, cycling can take off anywhere if circumstances align just right. Now what determines that alignment is another topic - a topic I think is exciting, and far from a lost cause, no matter how unlikely the region in question might seem.