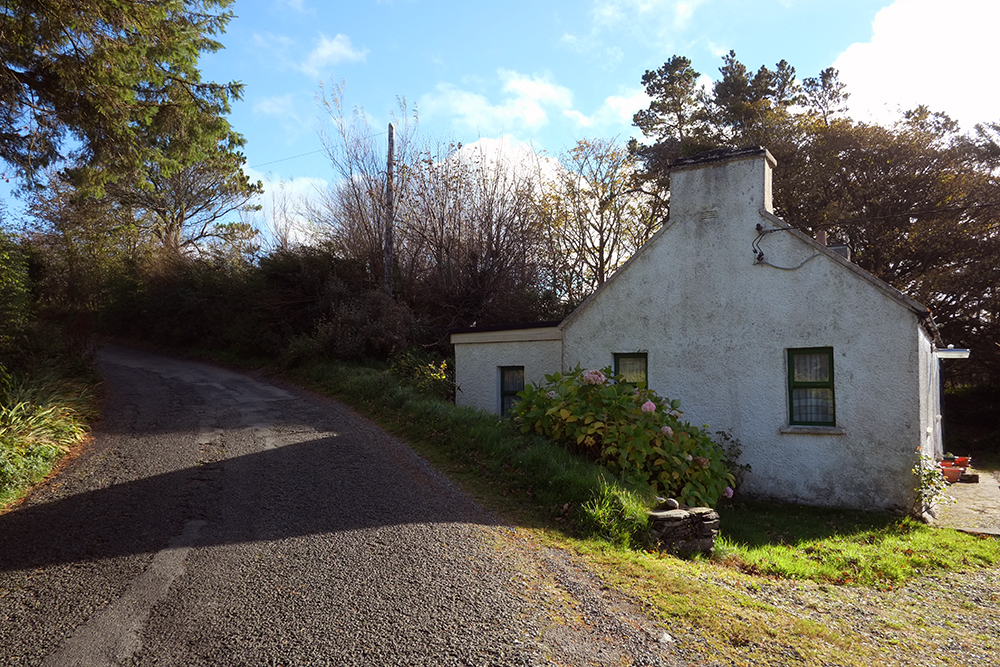 It is a road that I have climbed so often, it is really no longer a road, or a climb, but more like some inexplicably repeating drama. A play in which I find myself performing some peripheral, but necessary, role, again and again, as if caught in a dream loop.

The play consists of three acts. First is the long and sweeping, gentle pull, through meadows and gated gardens. So subtle is the gradient here, at times I would almost wonder whether I were climbing at all, feeling compelled to check my tyres for flats. It is a slow beginning. Time seems to drag. The sound of insects is loud. The landscape feels suspiciously open, bringing about that sense of being watched. Uneasily, it stretches on and on, until its monotony comes to an abrupt end at a sharply rising slope.

The slope intimidates with its vertical immediacy. But this is a ruse - as the crest, hidden from view by its steepness, is near. And after it, a dramatic dip. End of Act 1.

As the road twists and narrows, I climb my way out of the hollow, in which sits a small village. Or maybe it is a settlement. There is no shop, no postoffice, no pub. There is, however, a surprisingly large church, and it sits back from the road behind trees and an iron gate, almost coyly.

The houses are densely clustered and old, different in shape and size but nonetheless resembling each other in a way that suggests they were built in the same era. At a gradient that steepens with every meter, the road snakes narrowly between them, now almost like a private driveway. The temperature rises here; the hollow is a sun trap. Sweat runs in streams into my eyes. There is a crossroads now, with roads to each side offering a way out of completing the climb.

After the crossroads, the houses grow sparser, the tree shade thicker, the gradient steeper. As I round the next bend, I keep my eye out for the pillar with the white mailbox attached. When I see it, I drop into the small ring. I stand, then sit back down again, then stand for a while longer. And I keep my eye now on the houses. After the last one, ends Act 2. The real climb begins.

And of course Act 3 is what it's all been driving toward. When it arrives, it is almost cheap in its shock tactics, a jumble of pain, desolation, loosened emotions. But it is not only painful, this climb, this third act. It is plain bad. It is all so exaggerated and improbable - from the eye-poppingly sharp gradient of the final mile, to the bare and windswept bogland that is now the only thing to be glimpsed in any direction. It is this improbability - the sense of suspended disbelief - that propels me through the whole thing every time. It is also what keeps me coming back. I remember the play as being bad. But could it really have been that bad? Perhaps I need to sit (or stand) through it just one more time, to be sure.

But after every last time, would come the next last time. Until the bad play becomes a cult play. A bizarre obsession.

How many times have I done this climb? Don't ask, I have lost count. And the ending never fails to surprise me. Because by the time I recover sufficiently to attempt it again, I forget how bad it is. I forget every single time.

The last house stands on the righthand side, on its own and some distance uphill from the ones that come before it. It is white, with green trim. And although there is nothing in it unusual, I study its nuances with a grasping intensity, as if stalling for time. From the texture of its finish, to the likely number of rooms within, to the possible character of its occupants, I have given all things about it tremendous consideration. Over time they've acquired a sort of secret meaning, as if hiding clues as to what sort of time I'm about to have up the road ahead.

When I last attempted this climb, the journey took on an unusual sense of buoyancy, as it does on those rare occasions when my head is extra clear and I am in my very best shape. I began to think I had conquered the climb and the shock of its final drama.

It was then I caught sight of something ahead. I could not discern it at first. But as I drew closer, it looked like the beginnings of a new construction. The site stood unsheltered, surrounded by bog, some ways up the road from the last house.