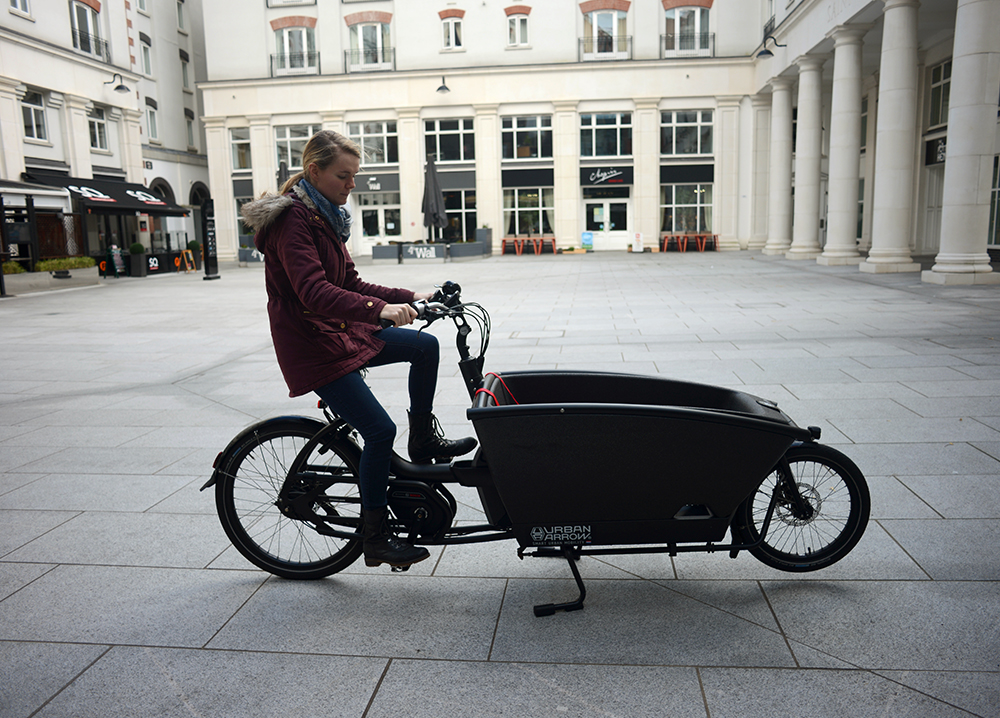 When I found myself in Belfast some time ago with an hour to spare, I used that hour wisely: I met for a coffee with local cycling celebrity and trans youth advocate Ellen Murray.

As I locked up my bike in St. Anne's Square, her arrival was tremendous. The sleek, black, shark-like contraption she pedaled appeared not so much to roll, as to slice through the stately, rather Viennese, backdrop of white neoclassical buildings. Pedestrians stopped in their tracks. A passing flock of birds hovered overhead. And I, mouth ajar, nearly dropped my U-lock on my foot, as my own bicycle made a meek neighing sound in the presence of this formidable giant.

"Your new Urban Arrow!" I said, trying to play it cool and hide my awe, "How do you like it?" 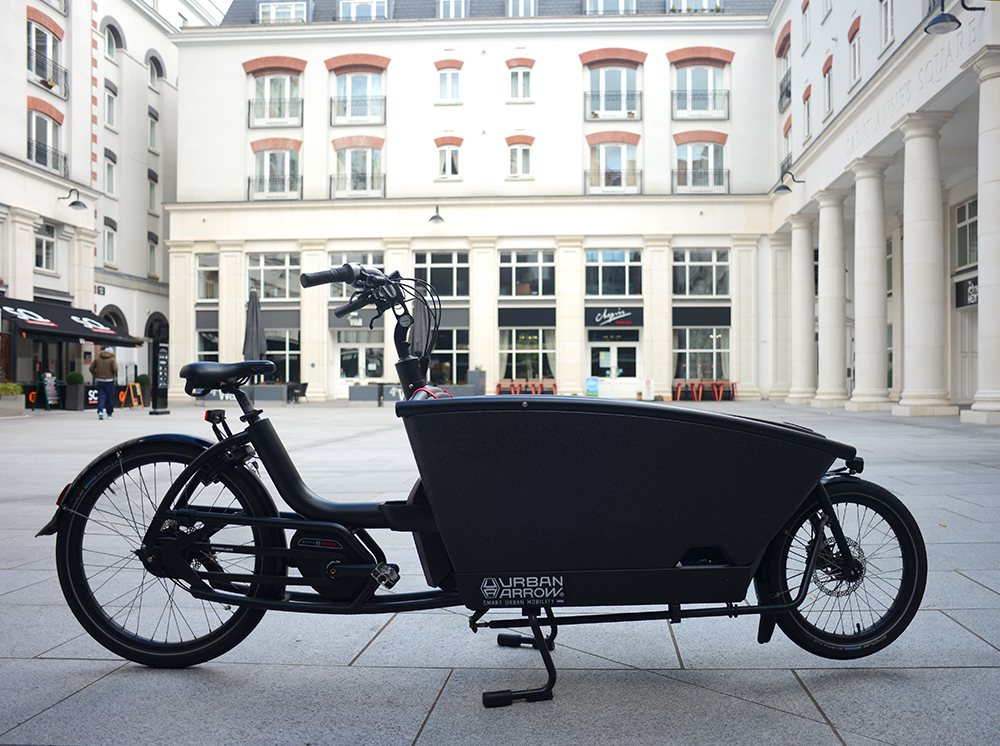 Unsurprisingly, she liked it very much indeed. Ellen's transport cycling history began with a roadbike, then progressed rapidly to a contemporary Batavus step-through, and a Pashley Postie. With each bike, she enjoyed sitting ever more upright, and appreciated being able to haul ever more stuff. It began to dawn on her, that perhaps what she really needed was a full-on Dutch style cargo bike.

One problem, however, was that Ellen's disability (when off the bike, she moved with the help of a cane at this time; she now uses a wheelchair) was making it difficult to put in as much daily milage as she wanted. And switching to an even larger and heavier bike probably wouldn't help matters. So she did some research. And then she researched some more. And she discovered the Urban Arrow. 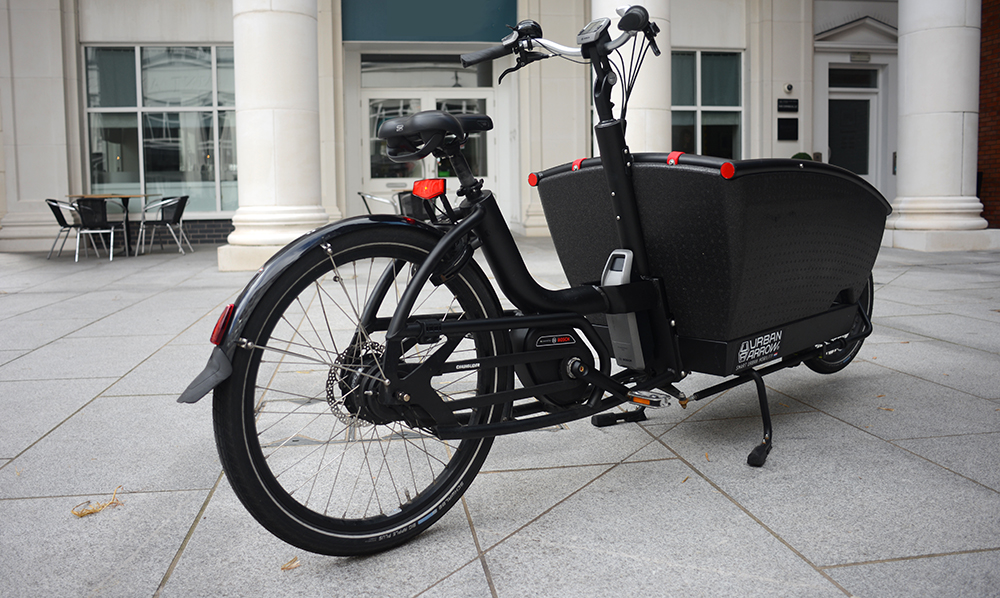 A comparative newcomer to the cargo bike scene, in many ways the Urban Arrow is a typical Dutch bakfiets (box bike). It's a step-through frame, with swept-back handlebars, generator lighting, chaincase, mudguards, internal gears, and an enormous front crate - which can be adapted to carry cargo or human passengers, including infants and children.

However there are several crucial features that make the Urban Arrow a bit different. First, it is made of relatively lightweight materials: the frame aluminium, the box a durable foam (expanded polypropylene). Second, it is designed to be zippy and maneuverable whilst retaining the tame, easy-to-master handling of a traditional bakfiets. Third, it is modular: The front end of the frame can separate from the rear, allowing to switch platforms (family, cargo, "shorty").  Finally, the bike is available - and, in fact, comes standard - with integrated e-assist. 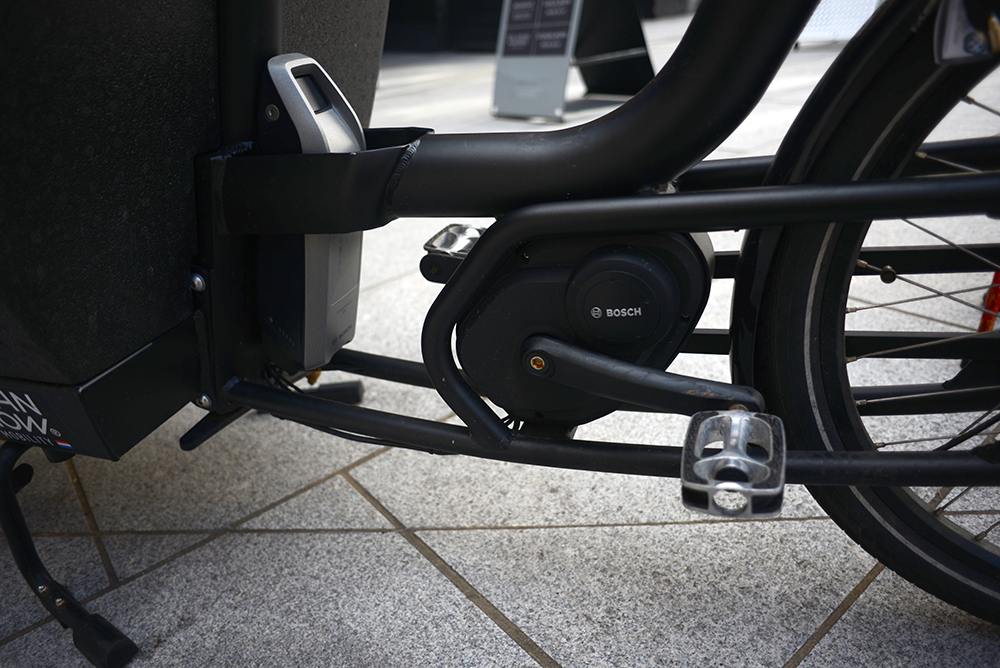 Adding e-assist to cargo bikes is not exactly a new practice. But the key word here is "integrated." The Urban Arrow was designed as an electric bike to begin with. As a result, it incorporates the assist in a manner that is streamlined, native-looking, and economical weight-wise.

There is no awkwardly attached battery taking up valuable real estate and adding bulk. The Bosch 400 Wh Powerpack sits in a special nook behind the cargo box, so stealthy it is nearly invisible. The motor integrates with the cranks and bottom bracket in a way that looks wholly organic. Both are low to the ground and compact, making minimal impact on the bicycle's look and balance. 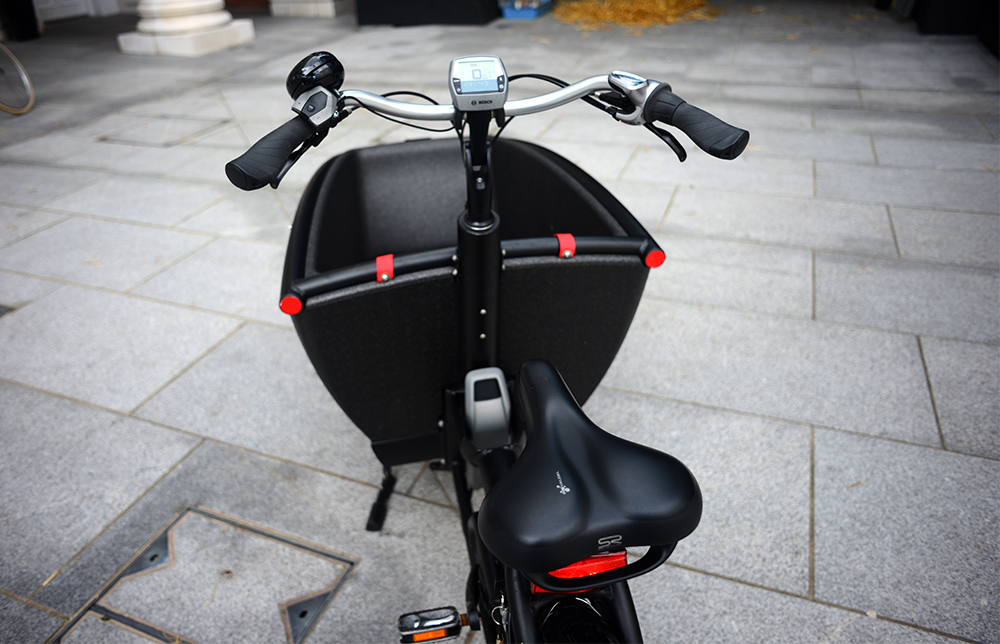 On the cockpit-end sits the e-assist control unit that monitors battery range and allows for different settings (turbo, sport, tour, eco), and the gear shifter for the NuVinci N360 hub. 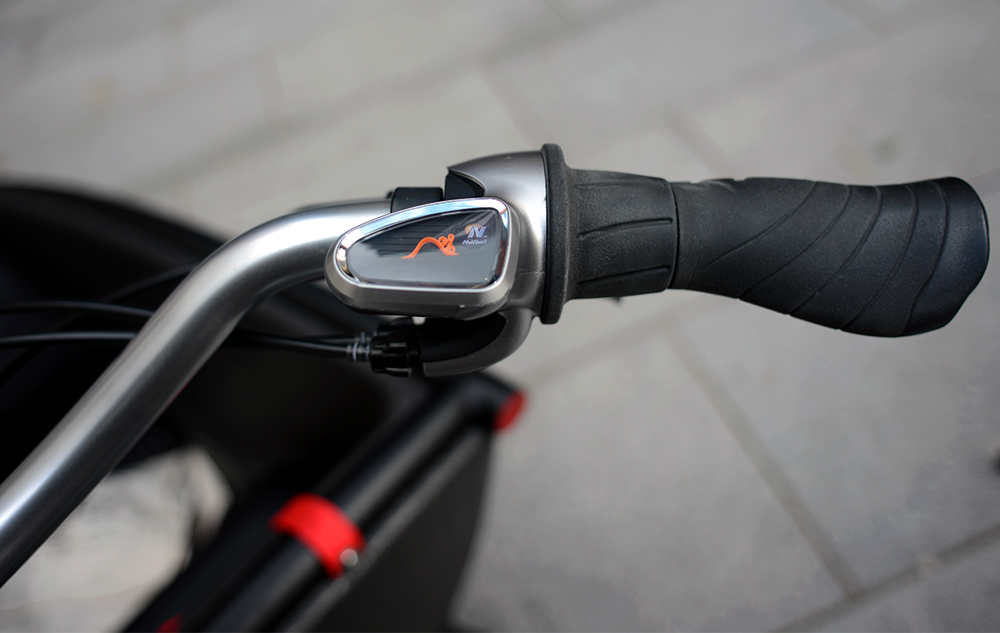 For those unfamiliar with the NuVinci system, it in itself is really something, and a treat to experience on what is already interesting machine. An internally geared hub, the NuVinci is unique in that it offers a continuously variable transmission. There are no individual gears as such. Instead, there is a wide (360%) range of continuous, "unlimited" gear ratios. You twist the shifter, in increments as tiny or as large as you like, and the gearing grows proportionally lower or higher. The animated icon on the shifter reacts by continuously steepening and flattening the landscape, thereby indicating where you are within the range.

Having dealt with fixed systems of gearing throughout my experience as a cyclist, NuVinci's smooth, continuous drivetrain felt exhilarating to try for the first time. And its integration with the Bosch e-assist felt seamless. 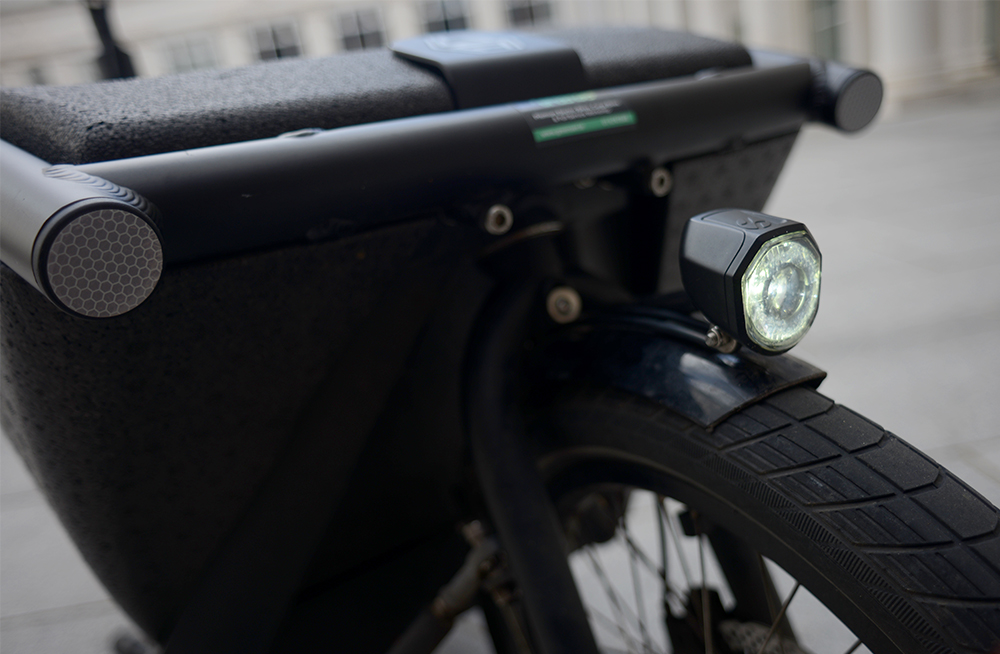 Also seamless is the integration of the generator lighting (which runs off the battery), and, of course, other standard bakfiets accessories, including mudguards, chain guard, heavy-duty kickstand, and giant loud bell. 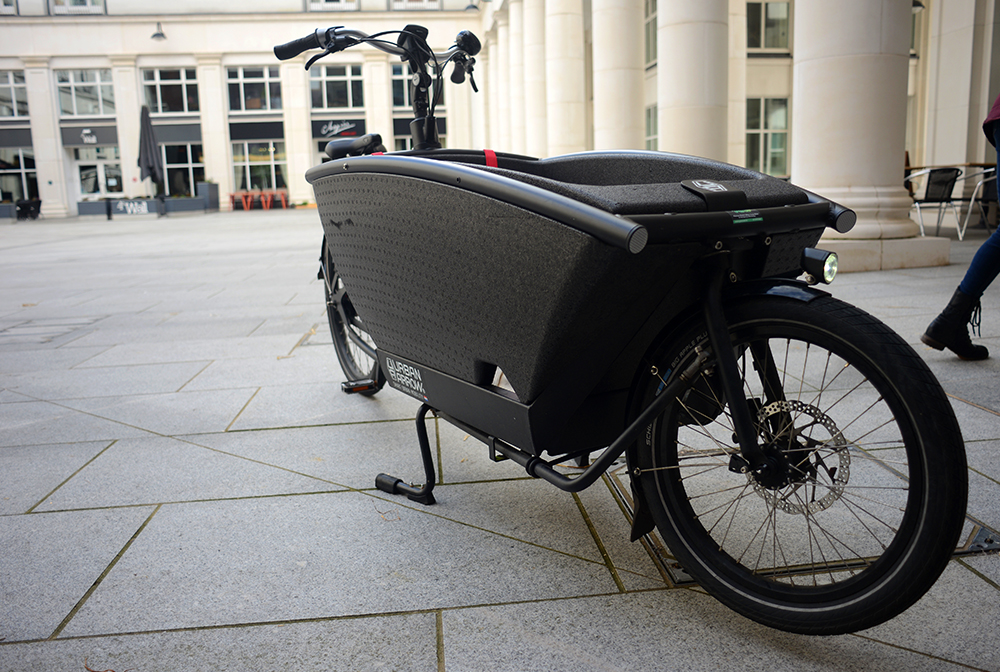 The overall look of the Urban Arrow is really - to my eye, at least - incomparable to any other front loading cargo bike currently on the market, in terms of sleekness of presentation. And it's more than just the clean lines, the contemporary materials, and the almost architectural minimalism. There is an aggressive wooshness to it that communicates speed and excitement, reminding me, more than anything, of one of those raw-finish racing supercars.

It's an interesting choice of aesthetic for a cargo bike. And one that would almost have you forget that these things are designed for everyday family life. But perhaps the point Urban Arrow are making, is that family life, and sexy woosh-wooshness, need not be at odds with one another. 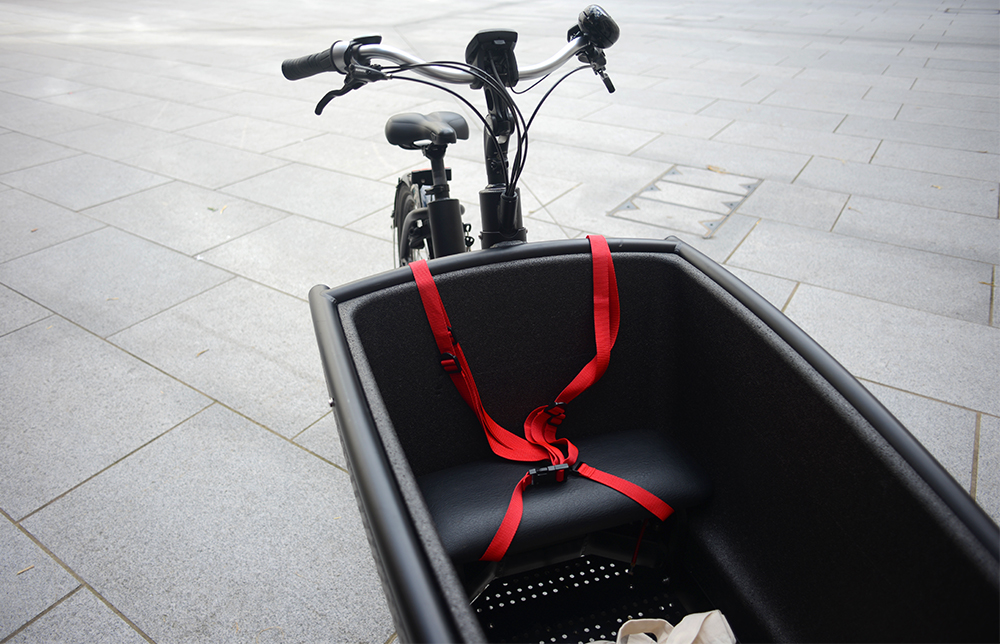 The open-box design of the Family model is ideal for the transport of passengers, cargo, or a mix of the two. With benches, seatbelts, and easy options for both child and infant seat attachments, as well as optional rain cover attachment, it is a versatile system for up to 4 passengers, dependent on age. It is also, Urban Arrow claims, superior safety-wise, placing passengers "lower than other cargo bikes, as its center of gravity is closer to the ground... And the robust and shockproof foam (EPP) box gives extra protection."

Having experienced the Urban Arrow as a passenger, I did find myself seated deeper in the box than I recall from having tried this in several other bakfietsen. I can also report that it was cozy and fun. 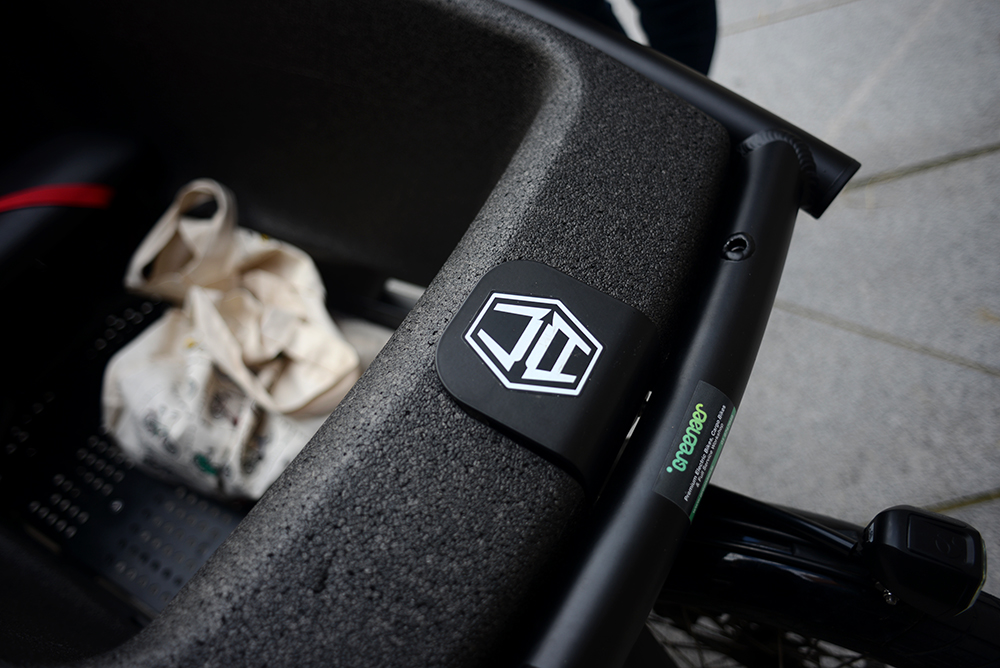 While Ellen does not use her bike as a family vehicle, she does have occasion to transport passengers now and again, usually adults, and describes this process as a relatively easy one - thanks to the bike's maneuverability and to the e-assist.

More frequently though, she uses the box to transport work supplies, and her wheelchair. The combination of the two machines - chair and bike - is in fact rather perfect for Ellen, helping her move about at speed throughout the day and get things done with the efficiency she likes. 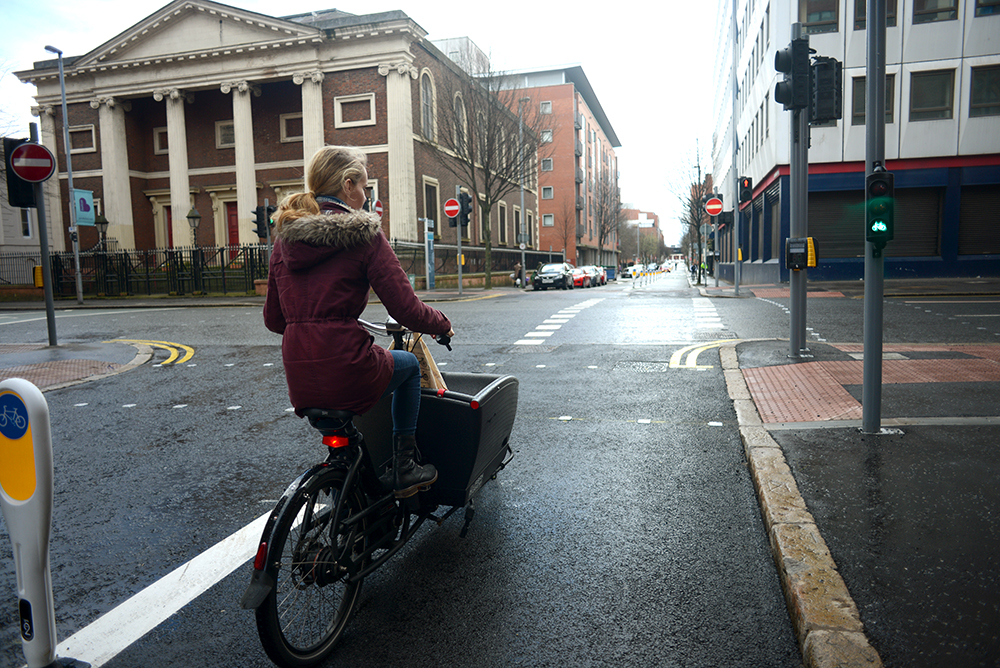 For those who'd want to use the Urban Arrow as purely a non-passenger work bike, the Cargo version comes with a lockable hardshell box designed for 150kg (330lb) of weight. And for those looking for a considerably more compact option, the Shorty features a two-level container that hauls a combined 73kg (160lb).

All versions of the bike are designed around a 26" rear wheel and 20" front wheel with Schwalbe Big Apple tyres, integrated Bosch e-assist, and NuVinci drivetrain, with a choice of hub or hydraulic disc brakes. The Family model is also available in a non-electric version. Optional accessories include rear racks, child seat adaptors, rain cover, luggage net, and more. 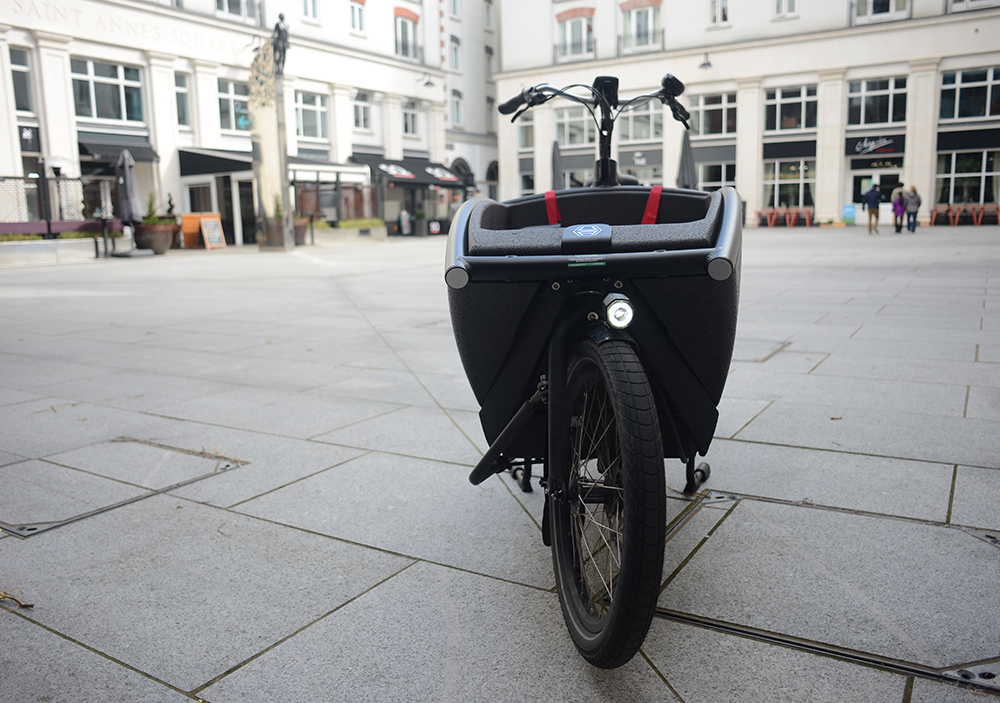 Measuring 244cm in length, the Urban Arrow Family model is a large cargo bike - on par in size with other popular front-loaders, including the Bakfiets.nl (225cm), the Larry vs Harry Bullit (243cm), and the Workcycles KR8 (264cm).

However, weighing in at "only" 43kg (95lb) for the electric version, it is lighter than what most front-loaders of this size weigh without the e-assist. Which makes it easier not only to propel along the road, but to walk and lift over kerbs - something I noticed immediately when playing around with the bike in the city.

While I did briefly ride the Urban Arrow, it was for a very short time and in a limited context. My only impression worth reporting is that it rode "normally" from the start, rather than like the sort of front-loading cargo bike where the steering takes some practice to get used to. It's a bike that I would certainly love to get to know better. 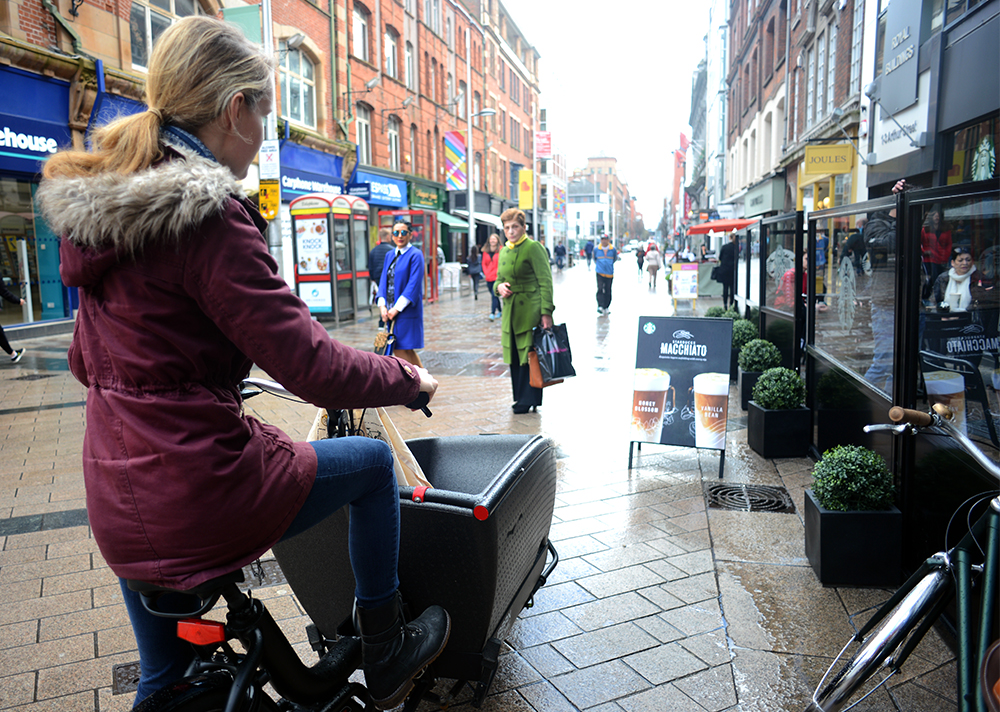 With a current (European market) price tag of €2,150 for the unassisted, and €3,950 for the electric, machine, the cost of the Urban Arrow is on par with other cargo bikes in its class. Which is to say, quite high if you judge it by city bike standards. But more reasonable if you think of it as a family car replacement, which is how the manufacturers of this category of bike promote them.

In future I would love an opportunity to do a proper test ride of the sexy, fascinating machine that is the Urban Arrow. While the name suggests it is designed for cities, with the e-assist I do think it makes for a good candidate for hilly, windy rural areas as well, which is where I normally ride. Even more so, I am curious what the non-electric version would feel like, with that lovely NuVinci drive.

As far as Ellen's use case scenario, it is delightful that she and the electric Arrow have found one another. Thanks to the Urban Arrow, not only has there been improvement to Ellen's mobility, but, I daresay, to the streets of Belfast.

With thanks for allowing me to paw her bike, I invite you to check out Ellen's tumblr and ever-entertaining twitter feed, as I wish you a Happy Weekend! For a full picture-set: visit here.