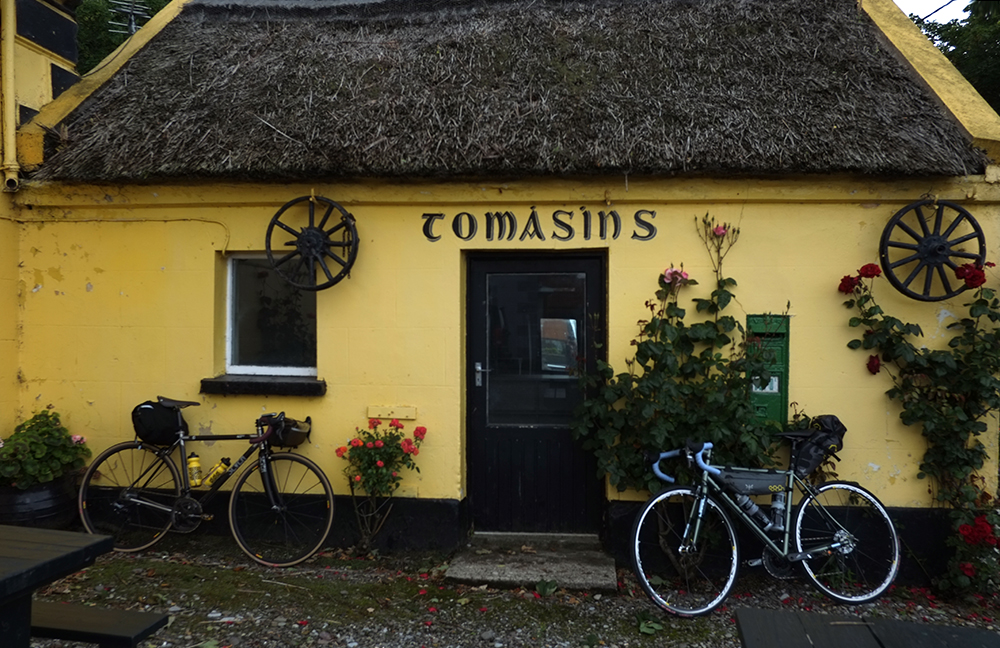 I used to assume that the bicycle tourists I saw hauling fully loaded setups were going the full monty. That is to say - not only touring, but camping. Sleeping outdoors, preparing their own food. I expected their many pieces of luggage to contain sleeping bags, tents, cookware. It's no small task to haul around a mobile home, after all.

Then one time, I got chatting with a touring couple who had their bikes fully loaded. They were cycling along the west coast of Ireland, staying at hostels and B&Bs. Considering the enormous amount of luggage strapped to their bicycles (2 sets of panniers and a handlebar bag, each), I was surprised to hear they weren't camping, but I did not have the nerve to ask what they were carrying in all those bags. However, from that point on I began to chat more with passing cyclotourists about their setups - and was surprised to learn that, regardless of load size, only a very small portion of them were camping or preparing their own food. In fact, the way we get talking in the first place, is that usually I am asked if I know of a good hostel, or restaurant, nearby. Emboldened, I eventually asked a young couple from Belgium what was in all their bags. They showed me, and it was basically loads of clothes for different weather conditions, bulky hiking boots, cameras, extra food, electronics, a couple of books. 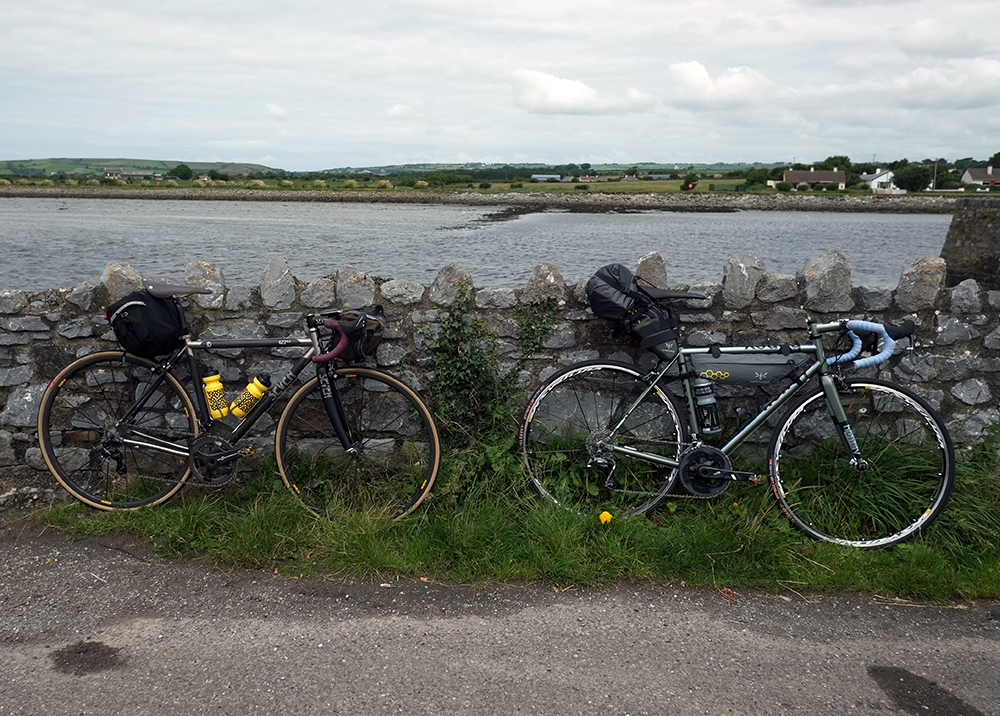 I do not like riding a needlessly heavy bike. And in my head I had already worked out, that everything I would need for a bicycle tour, in a region with easy access to civilization, could easily fit into a single saddlebag. But did these cyclists know something I didn't? Seeing their fully loaded setups made me question my own judgment. But considering I have no interest in loaded touring, finally I just had to do it my way and see how it went.

Luckily, my husband feels the same way. And we agreed to try our longest mini-tour to date (5 days/ 4 nights, around County Kerry) on lightweight bicycles, using rackless setups. For a short tour at least it would hopefully be enough. And it would inform us as to what we would need to do differently on longer trips. 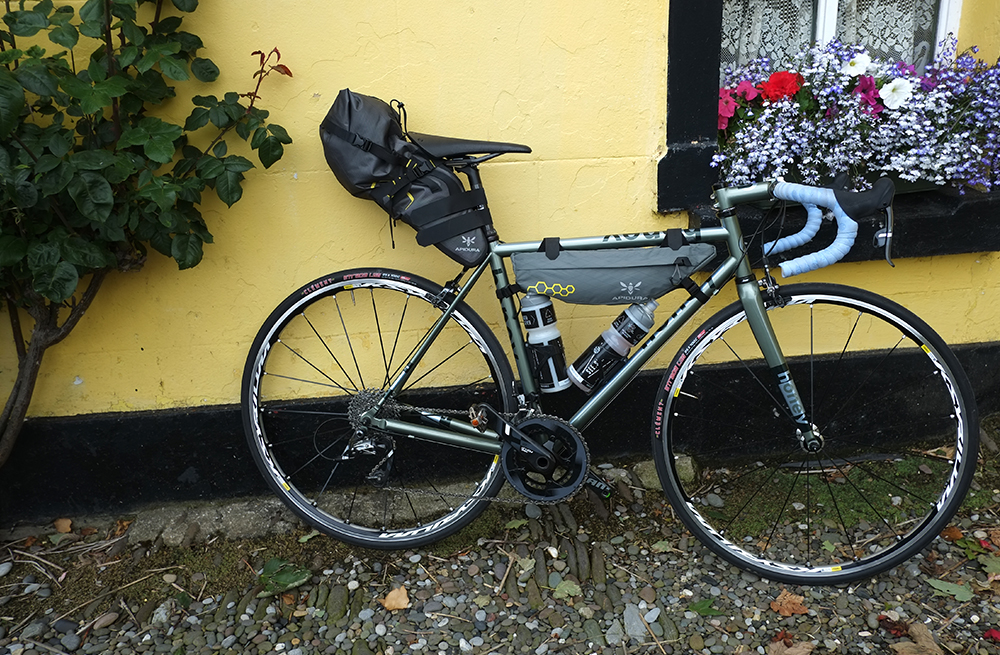 So this is the husband's setup: his lightweight road race bike, loaded with an Apidura 14L saddlepack, and Small road frame bag. The Apidura bags I have on loan for review, but he is mostly the one testing them as even the small framebag is a tad too large for my own bikes (it fits, but renders the water bottles unusable). Setups of this type are becoming increasingly popular, for their lightweight and aerodynamic properties. A saddlebag designed in this manner keeps drag to a minimum, by virtue of retaining its narrow profile no matter how much it expands. Likewise, the frame bag integrates with the bike, creating storage space without adding bulk to the bicycle's silhouette. The drawback to both, of course, is that they are quite narrow - making carrying items such as laptops and other wide objects out of the question. But if that is not an issue, as far as volume in of itself, they can fit quite a lot. 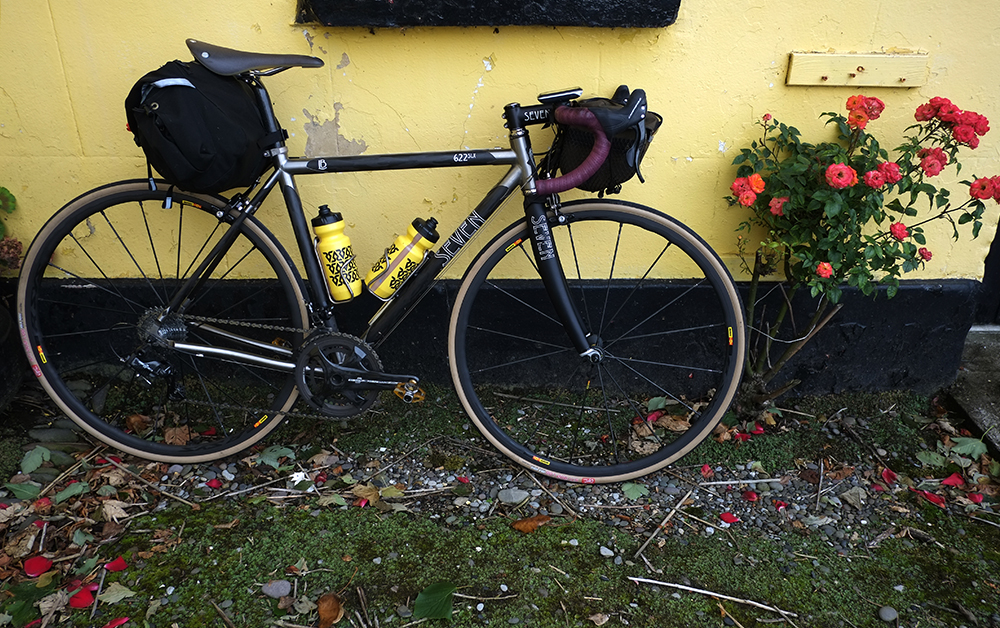 My own setup, while equally lightweight and contemporary, was a bit more traditional: a saddlebag and handlebar bag from Dill Pickle, on a project bike I am riding this summer. The handlebar bag is one I've used for brevets and camera-carry over the past 3 years. It is exceptionally lightweight, compact, and does not require a front rack for support. The saddlebag is actually an extra-wide commuter bag (designed to fit a 13" laptop in a padded case) that is not as light, compact, or aerodynamic as it would have been, were it made for "spirited cycling" specifically. But it is roomy, and likewise does not require a rack for support (and contrary to what the angle of this image suggests, it does clear my rear tyre!).

Although I think the photos and the bags' dark colours make my setup look more compact, in fact of the two of us I was carrying more stuff. Aside from a change of cycling clothes, full rain gear, an extra-warm layer, a week's supply of drink-mix powder, sunscreen, insect repellant, chamois cream, toiletries, various other small miscellaneous items, and my camera, I was carrying two sets of street clothes (wool dresses and tights) and a pair of very bulky, weatherproof, walking/ going out boots. My husband was carrying similar, but with somewhat more compact footwear and minus the second streetwear outfit (I should note that his saddlebag, as shown here, was filled to maybe 75% capacity). 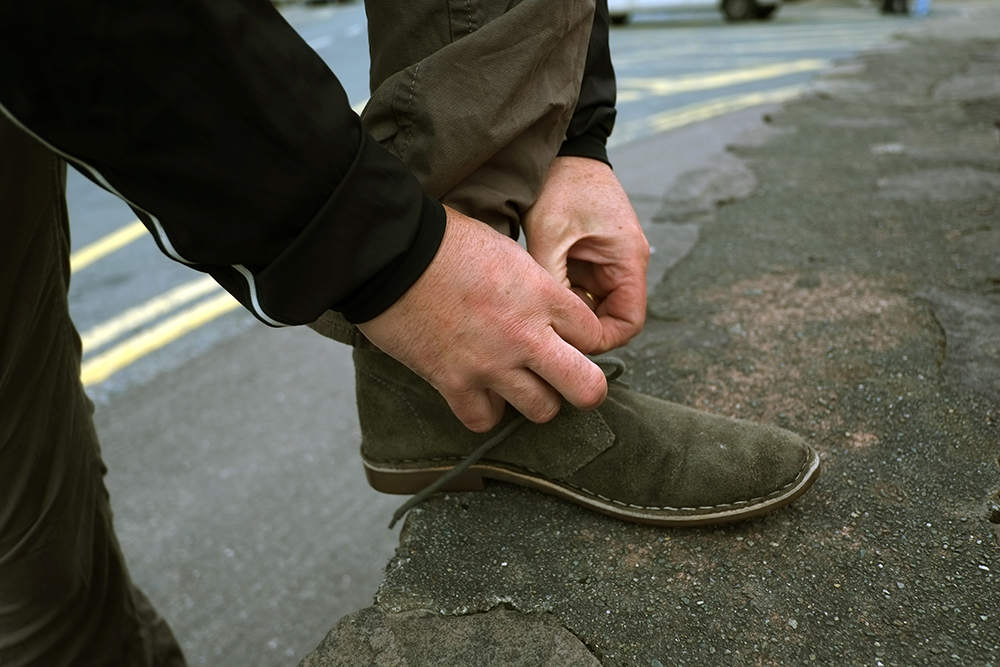 We intended to walk and do non-cycling stuff quite a lot on this trip.  It was nice to arrive at our destinations, leave the bikes in the hostel/ B&B, and go out on the town looking more or less "normal." 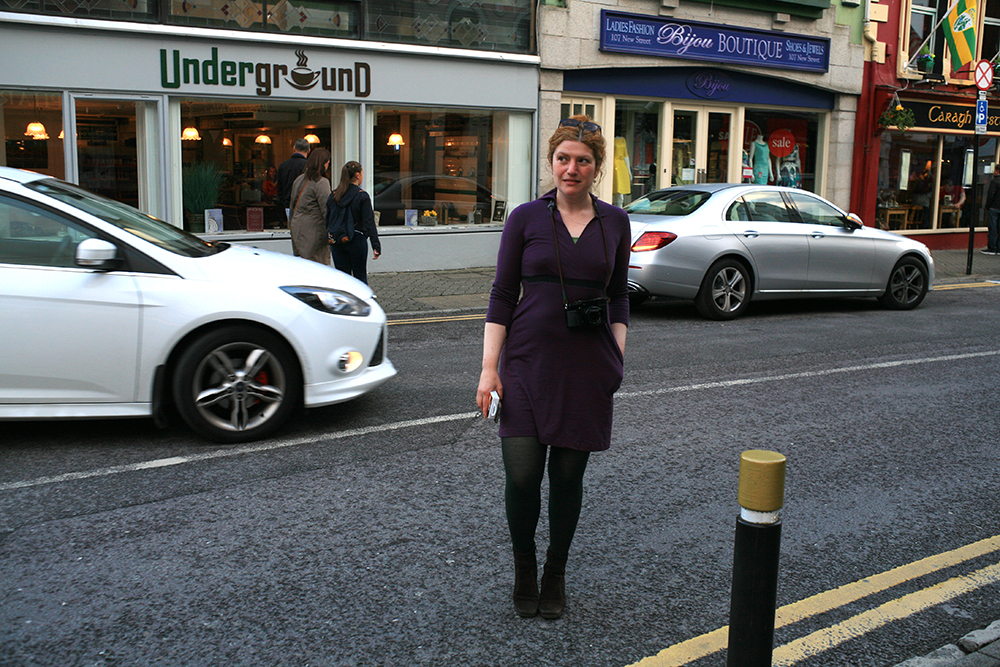 A bloated, red-faced, sweaty-haired version of normal, but nonetheless!

On our last attempt at a mini-tour I thought I was being clever and packed a flimsy little pair of collapsible ballet-flats. But the "summer" weather made mince-meat of them immediately, and I vowed then to always pack sturdy off-the-bike footwear, even if it meant sacrificing space for other stuff. Luckily, what my saddlebag lacked in aero properties, it compensated for in space - swallowing the boots and all my other stuff whole, with room to spare. 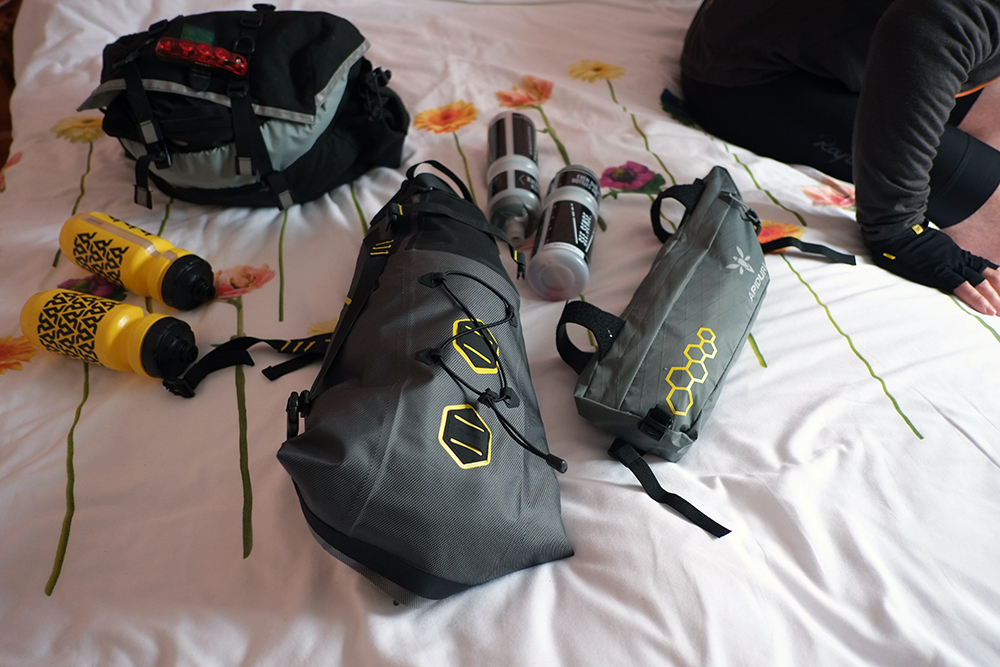 So what do two people need for five days, on (and off) the bike, in a region with temperamental weather but relatively easy access to amenities? As it turns out, not much. Even allowing for bulky items, such as our footwear and our cameras, as well as for changes of street clothing, a rackless setup consisting of one large rear bag, and a supplementary smaller one, was sufficient for each of us. In fact, for the length of this little tour we really could have packed less.

But what about for a longer trip? The more I think about it, anticipating various scenarios, the more I come to the conclusion that we really would not need to pack a whole lot more than what we did. A change of clothing means that one set can be washed and dried while the other is worn, and this rotation works just as well on long trips as it does on short ones. The amount of tools and spare parts  we would take wouldn't change. For myself, I would bring my laptop if going away for a week or longer. And for a certain someone who likes his stubble to look just so, a beard trimmer, and charger for it, would join us as well. Assuming that we wouldn't be camping, or preparing our own meals, I really don't see why we would need much more than this. 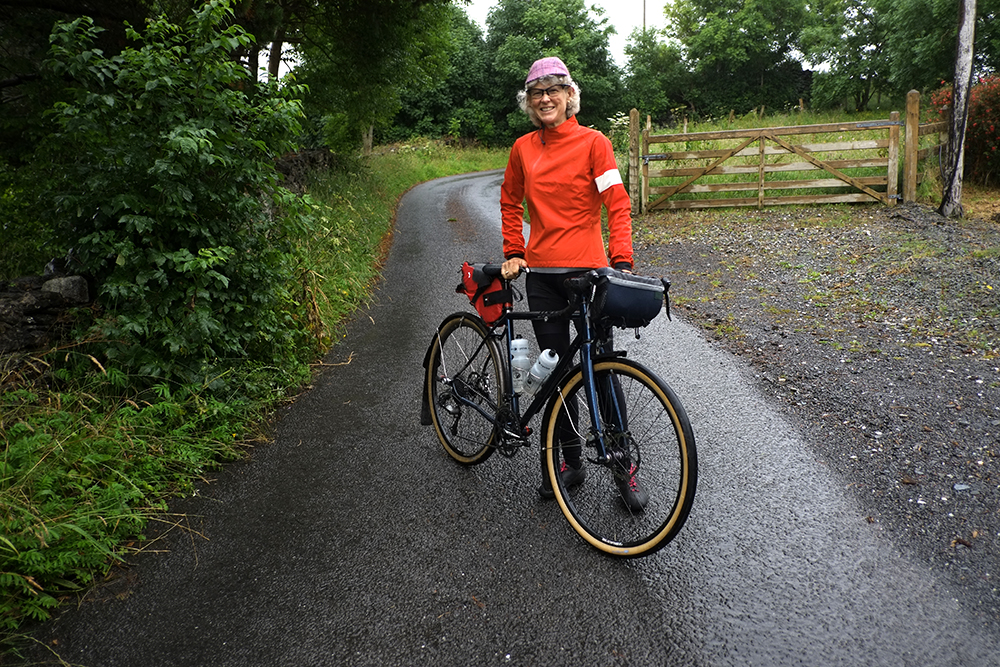 When I brought this up with experienced tourist Pamela Blalock (carrying conspicuously little at mile 2,000 of her Irish coastal tour!), she readily agreed. It used to be that she and her husband carried panniers and multiple bags on their tours, she said, despite staying at hostels and B&Bs. But this was largely due to two factors. First, electronic maps were not yet available. "One entire pannier used to be filled with paper maps!" she recalls. And second, in remote areas food would often be hard to come by through the day. So another bag would be filled with picnic meals and extra fluids, on which they would stock up every morning before setting off.

Today, a tiny GPS computer or phone, takes the place of maps for most cycle tourists. And Ireland, despite its swathes of bogland and low population density, is so conveniently peppered with amenities these days, it is nearly impossible to find yourself stranded without food or water within reasonable cycling distance. These changes alone eliminate the need for extra pieces of luggage that were once essential. 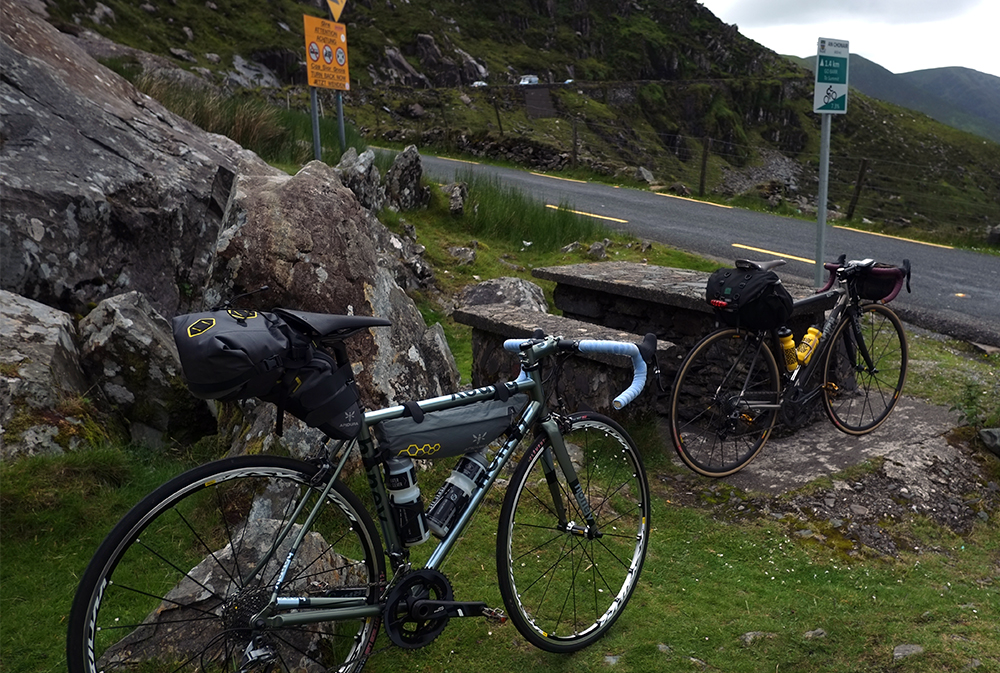 Bag design has also come a long way. The contemporary fabrics and styles may not be as attractive as the canvas, leather, buckles, and lacing of traditional touring setups. But they are lightweight, easy to use, compact, waterproof, and - perhaps, most importantly - do not require supporting racks. This latter point is significant, as it means being able to use a lightweight performance bike for this type of touring, without having to modify it in any way.

It's important to recognise that everyone is different. There are cyclists who like a sturdier, heavier bike for touring, as well as those who prefer a traditional setup with racks. For me, traveling light makes it easier, as well as more enjoyable, to cover long distances and tackle challenging terrain. For a bicycle tour that did not require camping gear or cookware, we each found the setups we used extremely convenient, and will go with something similar on longer trips in future.

For anyone who hesitates to venture out on their first light tour, I hope it is useful to know that, whichever bags you use to achieve it, it is possible to get by without an elaborate setup. The idea of a bicycle tour can seem daunting, but it is really no different from any other trip: Grab what you need, set off, and go - you will figure out the rest along the way, and make adjustments for next time.