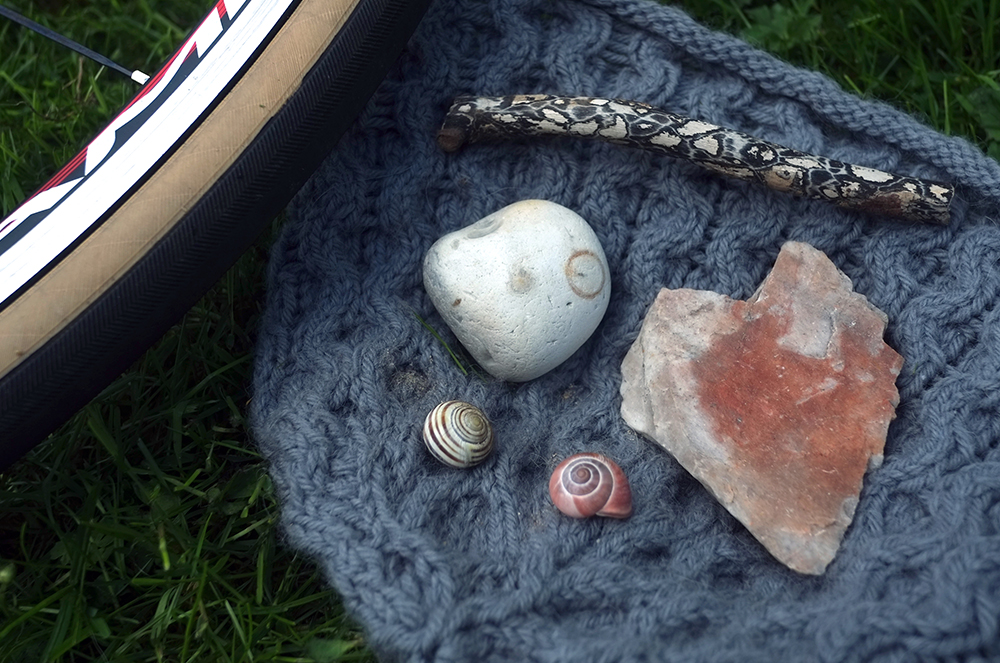 Maybe it's because I have watched too many Scandi-noir miniseries lately. But thinking of mementos and souvenirs conjures up something sinister - like the "trophies" a serial killer would keep. Then again, maybe that is not entirely inappropriate.

Out of a tattered yellow box I remove the little stash of objects and set them out on a cloth. They are meaningless bits of refuse to anyone but me, and I hide them not so much out of secrecy, as to avoid them accidentally being damaged or thrown into the trash. Still, there is an air of the secretive, of the deeply private and intimate about them. There is a feeling that the objects are a collection, tied together not only by some special theme but by a form of devotion. They are the things I keep from my bicycle rides.

It is hard to say what I am likely to take as a keepsake. I am not drawn to manmade stuff, such as buttons, or jewels, or coins. Even the intricate bits of mysterious metalwork and the dazzling chunks of sea glass that sometimes wash up on beaches I leave alone. As interesting and beautiful some of these objects are, I am not looking for traces of others. It's the landscape itself I want to keep. And to capture it photographically is not enough; I want to capture it physically, to keep it with me beyond my presence in its bounds.

So you see, it is a serial-killery impulse after all, in a way. An urge to absorb. A confusion of boundaries. "I have known this place and now it is part of me."

And so in my jersey pocket it goes. A small thing, usually. An interesting shell, or pebble. A twig with a fascinating pattern to the bark. A scraping of lichen or a clump of heather, to be later left to dry in the sun, or be pressed between a book's pages. One time I even took grains of sand. The sand had an unusual, turquoise-bluish tint to it. I grabbed a handful and poured it directly into my pocket, then later shook it out into one of those transparent 35mm film containers. It really did look somewhat turquoise, in the right light. And when I think of the miles I did that day - up and down the forested coastal roads - there is a grainy, turquoise-tinged feel to those memories.

When it comes to the cycling experience, I am in love with something I cannot define or pinpoint. It is not the speed and it is not the distance. It is not the challenge and it is not the "grace through suffering." When I cycle, it is solely for cycling's sake. I am not preparing for anything greater than what I am already doing. I do not chase epic rides or seek adventure. But I do a lot of ordinary cycling. Every day, and often multiple times a day, I am out on a bicycle. Whether I pedal near or far, fast or slow, it seems I am always discovering new places and experiencing new sensations. The familiar opens up and shows itself in new, surprising ways. And it is this intangible thing that I want to grab a handful of.

Do the keepsakes help? These bits of shells and sticks and dried plants and misshapen rocks? Not really. It's a compulsion to take them, nothing more. And when I look at them, rather than losing myself in memories of past rides, I find they make me impatient to go out on new ones.

And so I sweep it all back in the box and close the lid and put it away. All those miles, sensations, memories... What remains are not the mementos, but the desire to ride again.