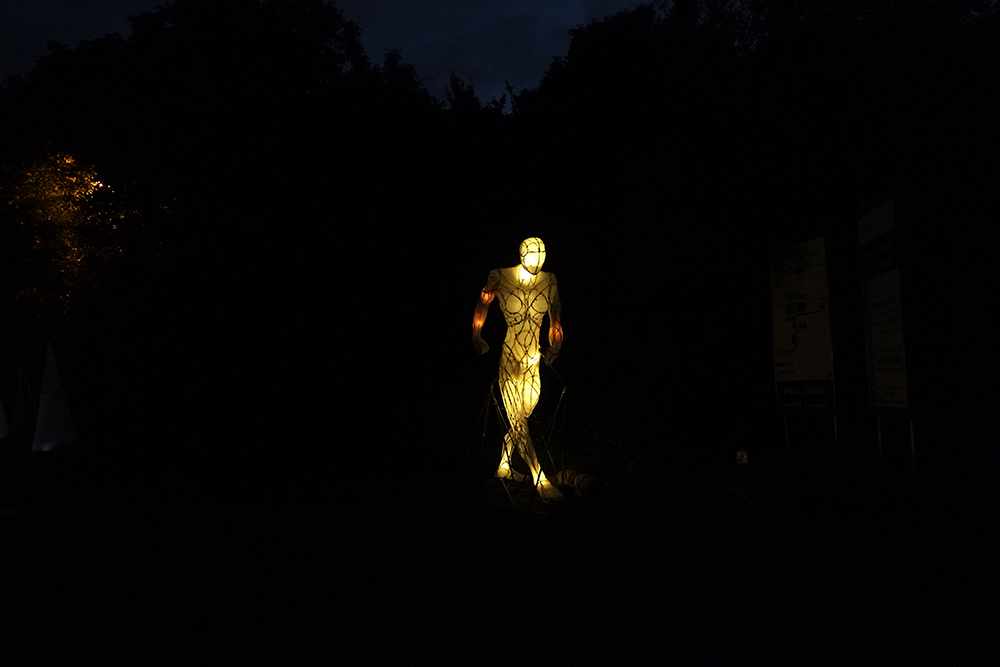 Over the weekend I attended a rather wonderful show that a friend was involved with. It's kind of difficult to categorise, but essentially it was a public art installation - an "illuminated sculpture trail," where a series of enormous, imaginatively-shaped lanterns, constructed of willow and papier-mâché, were placed throughout indoor and outdoor spaces, for visitors to wander amidst in the night.

The main part of the show was in a space about a mile out of town, and attendees were encouraged to walk from the town centre to get the full experience. So leaving our bikes behind, we strolled along a completely unlit series of backroads, along with dozens of others.

A few things struck me about this. First, how utterly dark it actually was without the benefit of my bicycle's headlight, or any other source of illumination. It is not often I wander about like this! Considering that, I also found it interesting and somewhat surprising that none of the public were carrying torches (flashlights) or sporting hi-viz attire.

The latter is becoming increasingly common here, not just for cyclists, but also for pedestrians. There are people walking their dogs in luminous vests, runners in reflective gear even in the daytime, schoolchildren wrapped in hi-viz sashes to cross the road. Yet on this occasion, everyone must have decided collectively that to wear reflective garments of any kind would compete with the experience we were about to share. And so we walked, a procession of disembodies voices, until the path in front of us turned aglow with a garden of fanciful shapes. It was truly a beautiful show.

Coming from a background of writing about cycling, it is hard for me to perceive luminosity in a way that is not politicised. Even now I could not help but notice that the sculpture trail was effective precisely because it stood out in contrast to the darkness around it. Had everything else been illuminated as well, the sculptures would not in fact have been highly visible. It is an argument often applied to the role of hi-viz in urban cycling and walking. Not to mention, of course, the countless debates about the choice to wear hi-viz versus the expectation for persons to do so, tied to the larger question of where the focus on road safety should be directed.

While I never much worried about being seen when I lived in cities, the past three years of rural nocturnal commutes have been very different. In the countryside, I never quite feel lit up enough, no matter how brightly I might adorn myself or my bike. Despite being given every indication that drivers who pass me can see me (I am probably given more space at night than in daytime) I still don't feel altogether comfortable on the twisty, pitch black country roads, and tend to avoid travel at night if I can. It is a subjective perception of un-safety rather than one based on facts. But subjective perception is what colours our experiences and overall quality of life. And mine drives me to feel anxious about my visibility on the dark rural roads.

Despite all of this, I am still not fully convinced that it's "good" to be highly visible - at least in the manner that current hi-viz trends encourage us to. Which is to say, in a way that cannot be switched on and off at will.

Walking back from the sculpture trail later that night I saw something quite funny... a luminous teenage couple making out in an alleyway. Unbeknownst to them, their vigorous hand movements over each others' bodies were brilliantly lit up under the headlights of each passing car. They were wearing sporty tops with reflective cuffs, poor things. I had to force myself not to watch this intriguing light show.

There are other scenarios that are not conducive to luminous wear (being pursued by an attacker comes to mind). But at any rate, one problem with reflective stuff is that it does not give us a choice - essentially forcing us to be noticeable at all times. And while this isn't a problem when it comes to items such as vests and sashes, which can be donned and removed easily, perhaps it explains while attempts to integrate hi-viz into more integral pieces of clothing are less popular. Ventures to offer reflective paint for bicycles and bicycle parts tend to get mixed receptions also.