Of Mind and Gap 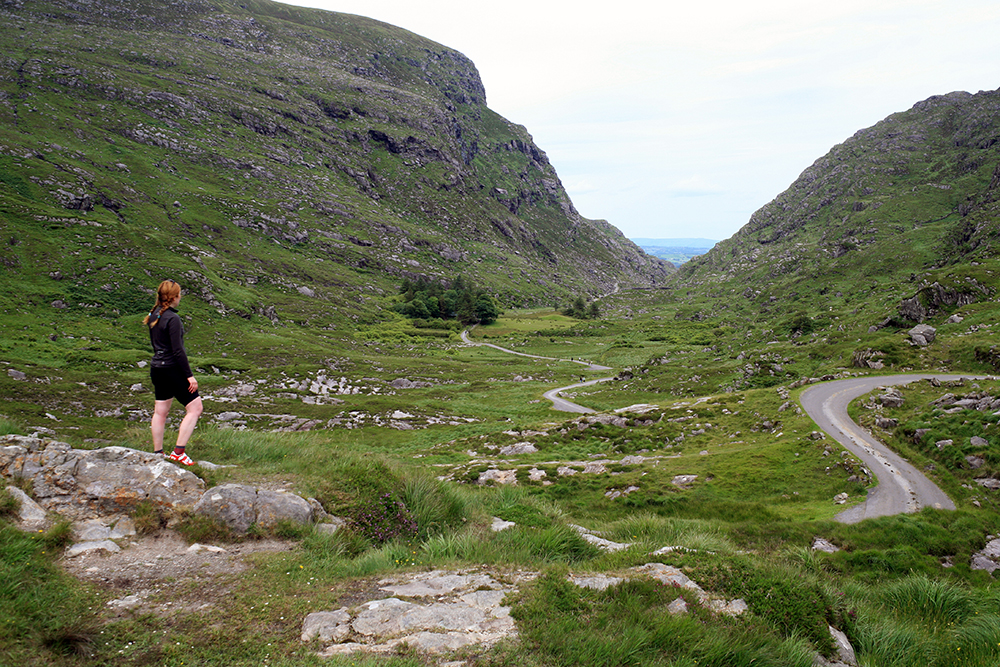 As a teenager, I once saw a black and white photograph of a magnificent landscape in a friend’s father’s study. I didn’t know quite what I was looking at. But, transfixed by the silvery squiggles strewn over the jagged mountain, I knew that it was stunning.

“The Stelvio Pass,” said my friend’s father. And I nodded, the exotic image forever fixed in my mind's eye. 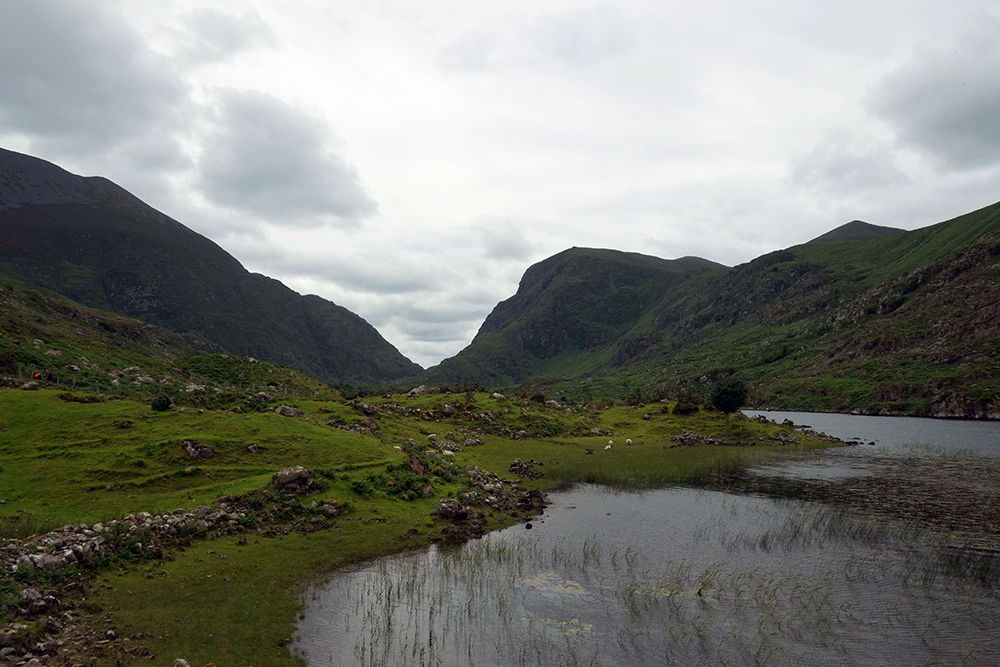 It was not until I was a cyclist, nearly two decades later, that I understood what a mountain pass actually was. A route over a mountain range, it aims to facilitate crossing by snaking through a gap between two peaks. It would be a mistake, however, to infer that a route of this sort is flat, or easy. No matter how you spin it, you are still crossing a mountain range after all. And so I soon learned to expect climbing when anything with the words Pass or Gap in the name was involved.

Still, in those parts of the world where I've lived, the passes and gaps have tended to be rather tame, straightforward affairs: some miles up, then down, with a few sweeping bends. That iconic image of dense bundles of switchbacks was something I'd only seen in photos.

I should have known that this was about to change, when I told a friend about our upcoming trip to Kerry. When I mentioned our plans to cycle over the Connor Pass and asked whether he'd done it himself, he responded with: "Ah yes, the Connor Pass is a must! It's a very ...European climb."

I did not know what he meant by that at the time, imagining vaguely a mountainside strewn with outdoor cafes and art galleries. But apparently, "European climb" means hairpins. Plenty of switchbacks and hairpins! But I'll get to that later. 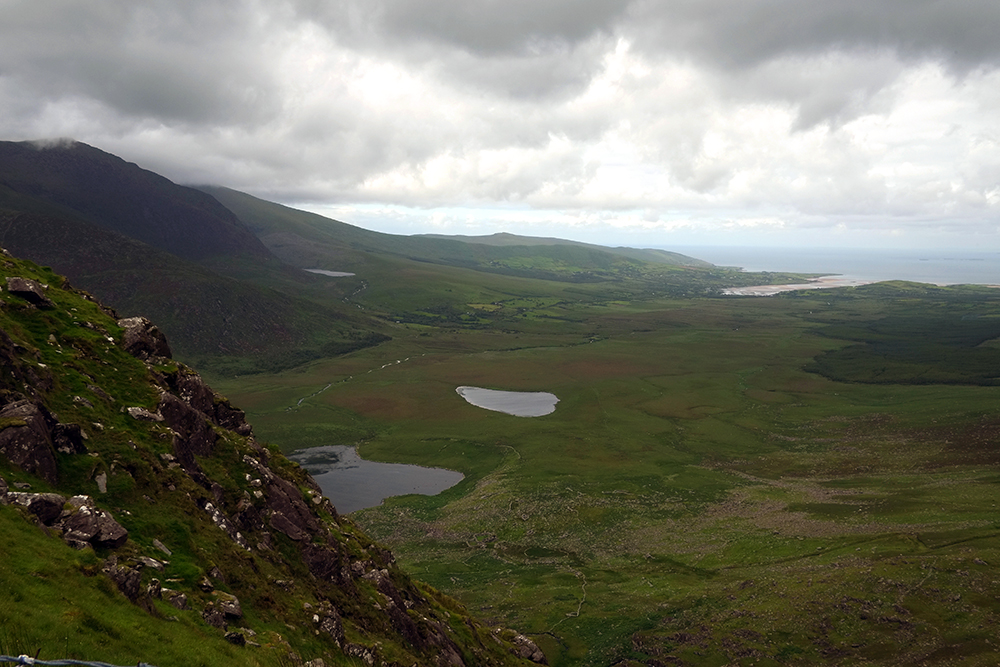 Located in one of the most scenic regions of Ireland, the Connor Pass slices lengthwise through the Dingle Peninsula at the south-western tip of the country, offering sweeping views of surrounding valleys and waterways. It is known as one of the highest paved mountain passes in Ireland and is a Category 2 climb. That said, it does not actually look too bad on paper: a not-quite-4 mile ascent, at 7-7.5% grade average. We headed toward it on the first day of our cycling tour, fresh and innocent. And as we pedaled into a moderate headwind from our starting point near Tralee, it almost felt like we needed the climb to burn off our excess of nervous energy. Had we packed enough things? Had we packed the right things? Would we find places to stay every night? Would it rain on us the whole time? Our minds needed to be quieted.

The usual route toward the Connor Pass is along a fairly flat coastal road that stretches for about 20 miles from Tralee through countryside that is attractive, but not overly dramatic - not counting the distant view of a mountain range that resembles a jagged knife's edge. The road starts out wide and fairly heavy with traffic. But at some point there is a fork, and a sign diverting lorries, buses, and other large vehicles onto a different road (thankfully, they are not allowed on the pass). The road toward the Pass itself grows narrower and quieter then, attaining a slight gradient. Then, after a sweeping bend, the view of the Connor Pass opens up.

I did not notice it at first. That is, I saw the steep face of the mountain when we rounded the bend, but did not see any road going up it. Then my husband shouted excitedly: "Look! There it is right there, you can see the road!" 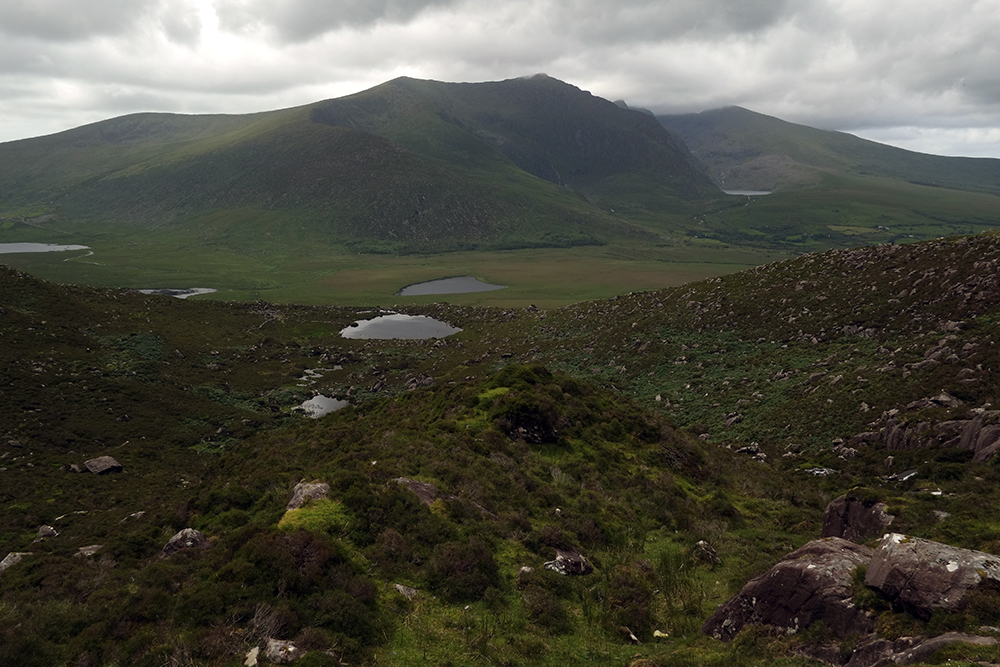 The mountainside was crumply gray rock. My long distance vision is not great, and the hazy light was not helping. But finally I saw it: A narrow, almost path-like road appeared to zigzag straight up the steep face of the mountain. Gray on gray, it lay camouflaged amidst the stone, like some giant malicious snake. I could just make out the tiny specs of several cars slowly rounding one of the hairpin bends, at a seemingly impossible height.

Next thing I knew, a pool of black began to spread over my field of vision - in that slow-motion way that happens just before you faint. I had the good sense to jump off my bike just then. And soon I was sitting at the side of the road, head below knees, my heart pounding, sweat pouring down my face. It took me a moment to gain my composure and understand what was happening. Was I having a heart attack? No, a panic attack. A panic attack at the sight of that road full of switchbacks!

Well, this was an interesting predicament. My mind began to race with solutions that would not ruin our trip, but really there weren't any other than my proceeding with the climb. I had wanted to do it. I had looked forward to it. But now every time I as much as glanced up the road, tears projectile-sprayed from my eyes and my legs trembled. At the same time, I was somehow managing to laugh at myself hysterically. "This is ridiculous! I don't know why I'm acting like this, I'm so sorry!" 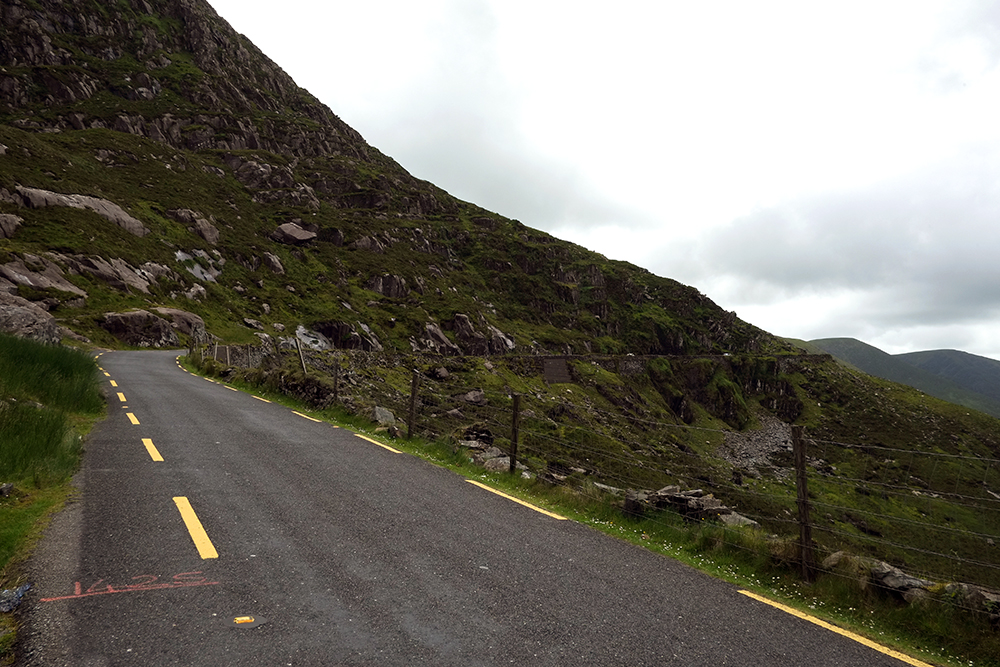 "You need blinkers, like for a nervous horse," suggested my husband pragmatically.

We toyed with the idea of tucking leaves into the sides of my cycling cap. But at length, we decided instead that I would simply try and keep my gaze down on the road and take it one bend at a time, without looking up at the landscape that spread out in front of me. And with this plan, and my legs still atremble, we set off to do the climb. 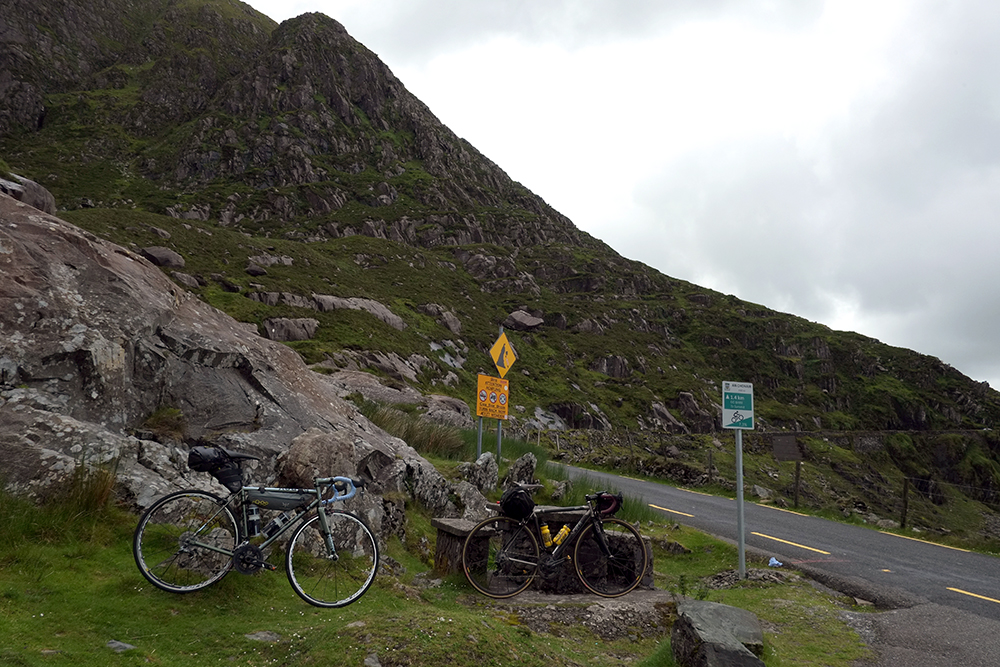 I don't want to downplay the physicality of a Category 2 climb. But if you are bicycle-fit, not in a hurry, and have reasonable gearing, the Connor Pass is not a difficult ascent. Climbing it from the so-called "steep side" as we did, the gradient was nearly always a very steady 7.5% - dipping occasionally to below 4% and spiking up to 11% a couple of times. Never anything worse than that. Now, the road is narrow, and there were occasional cars that required some steady nerves to steer around, especially if you happen to overlap at a bend. But if you can handle that, and can sustain the described gradient over <4 miles, you should have no problems with the physical part of this climb. With my gearing of 50/34t front and 11-29t rear, I flicked back and forth between cogs, just to vary the pace, and felt pretty good ...just as long as I kept my eyes on the road directly in front of me and did not attempt to look around. Because no sooner would I look at the many switchbacks ahead, then my heart would start to pound again, my breathing to get out of control, my hands and knees to shake. "Don't look; take it one bend at a time," became my little chant.

For the final few bends of the climb, the road tightened and competing with cars became quite precarious. Not wanting to hang about in this section too long, I switched into "let's get this over with" mode, quickened my pace and was at the top before I knew it. Well, that wasn't too bad after all! The first thing I did of course, was get out my camera and photograph the husband climbing the final stretch. 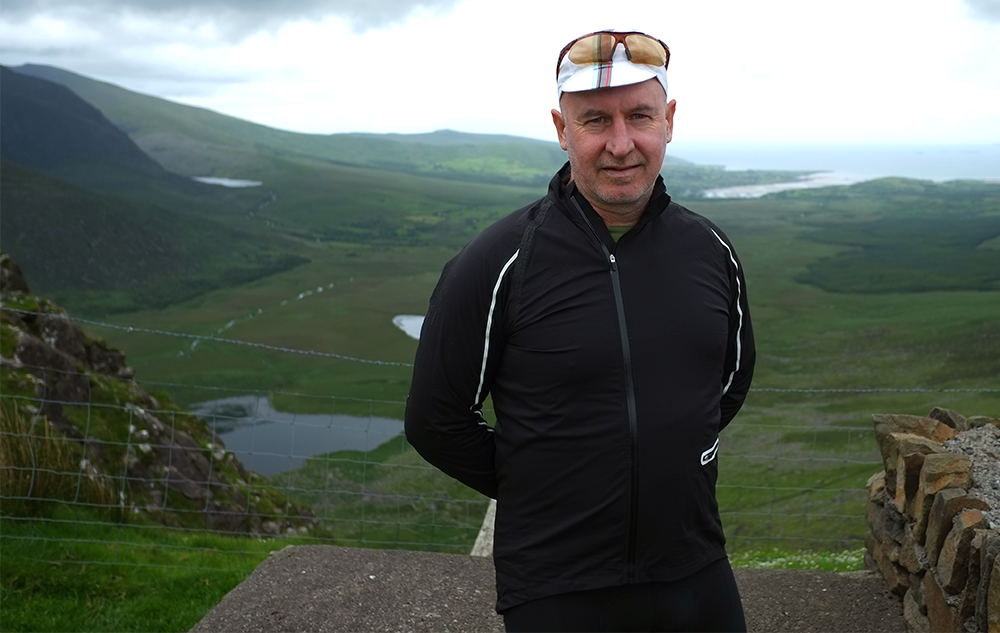 Dismounting his bike with a tired smile, he complimented my climbing skillz, then put his arm around me and gestured toward the Romantic View of the climb we'd just conquered.

My knees gave out straight away. 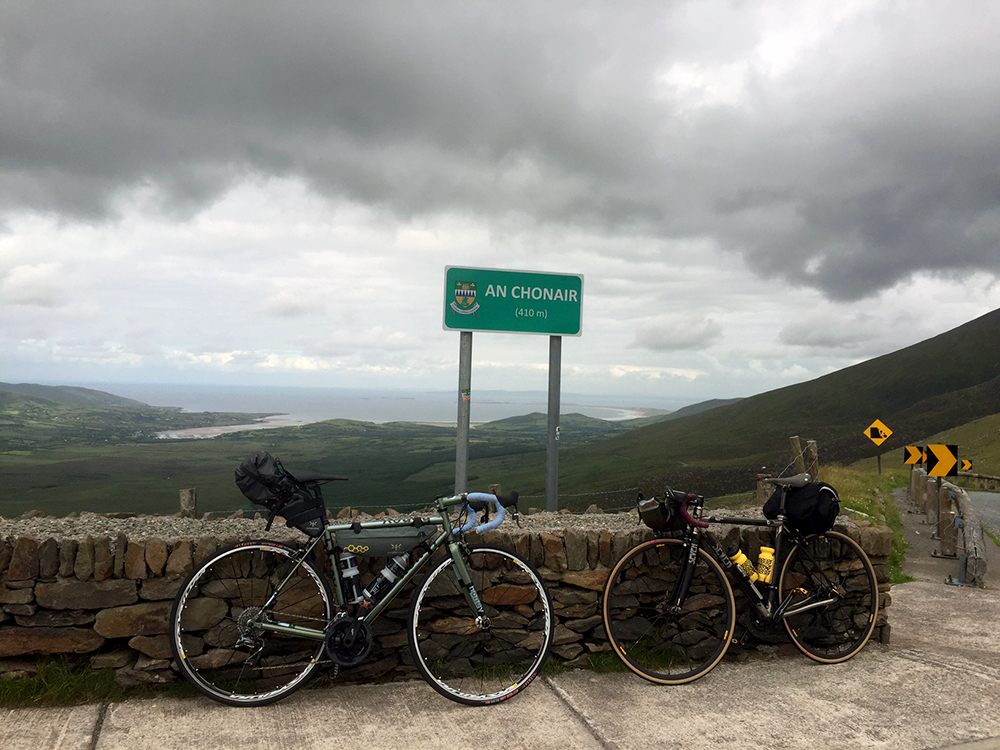 Normally cyclists celebrate at the top of a mountain pass. Me, I had to be propped up, dragged to the nearest secluded patch of grass, smacked and pinched till the blood returned to my face. An elderly couple stared and whispered suspiciously. A crow began to circle me eagerly. It was out of hand.

I was trying to understand what exactly was daunting me. Clearly it wasn't fear of doing the climb that was causing the panic, since the climb was now done and dusted. It was the sheer appearance of the hairpins that was having this effect on me. The view was't so much scary, as overwhelming; there was a "too muchness" about it. The reaction was not unlike a form of agoraphobia. 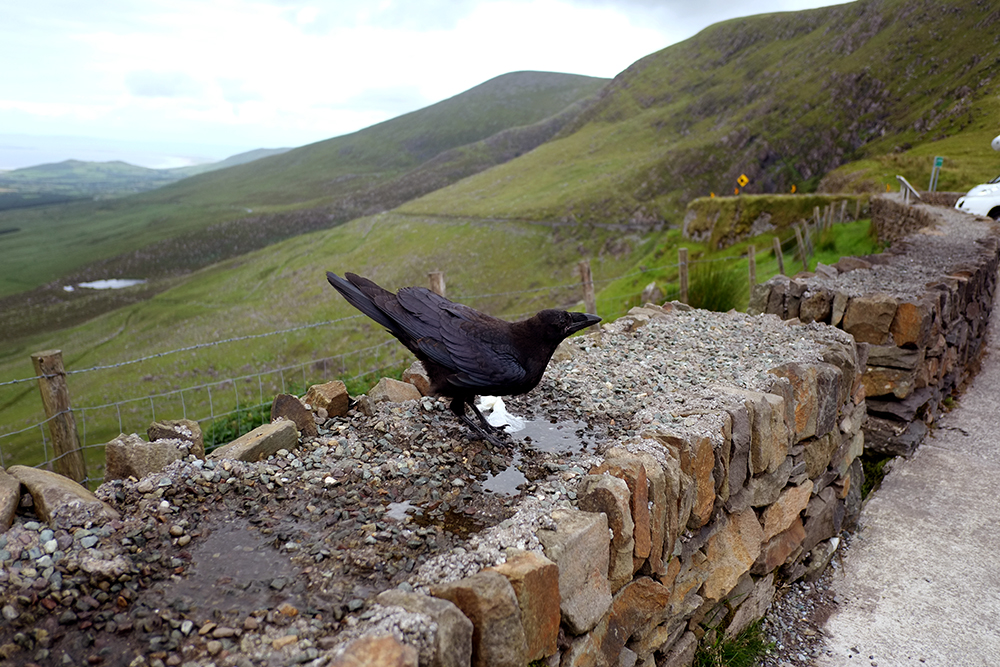 Seeing as I did have to descend the mountain eventually, I decided to try some DIY exposure therapy. I would look at the view of the hairpin road a little bit at a time. I tried to see it abstractly - to enjoy it as a work of art, as I did all those years ago with the photo of Stelvio. After a while (quite a while!) it seemed to work. Or at least I was calm enough to get back on my bike.

Thankfully, the other side of the Connor Pass was not nearly as twisty. The fairly easy descent did little to tax my handling skills and actually relaxed me. As we floated down to Dingle Town all seemed funny again. 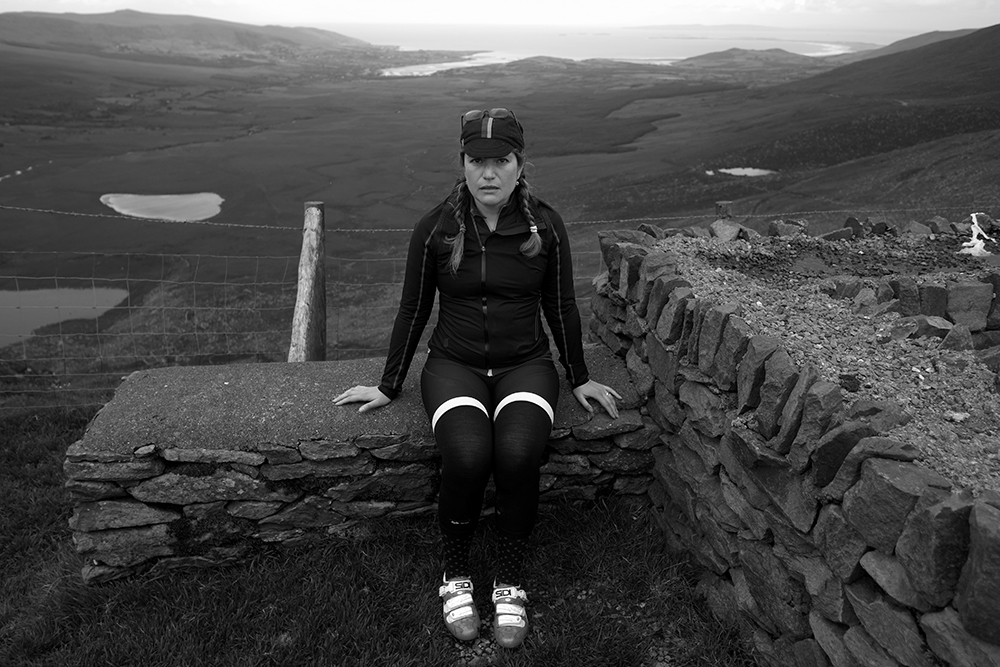 Two days later, we cycled over the Gap of Dunloe (pictured in the first and second photos) and Moll's Gap. Each of these magnificent gaps was a bundle of hairpins so tight, so steep, so narrow, so overall "European" - that the Connor Pass, in retrospect, began to seem like mere practice for the real deal! And somehow in the two days that had passed, I had come to terms with the landscape and no longer had the same reaction to seeing the hairpin roads spread out ahead of me.

The Stelvio Pass? Perhaps not just yet. But my mind is learning to step aside and let the body do its magic.