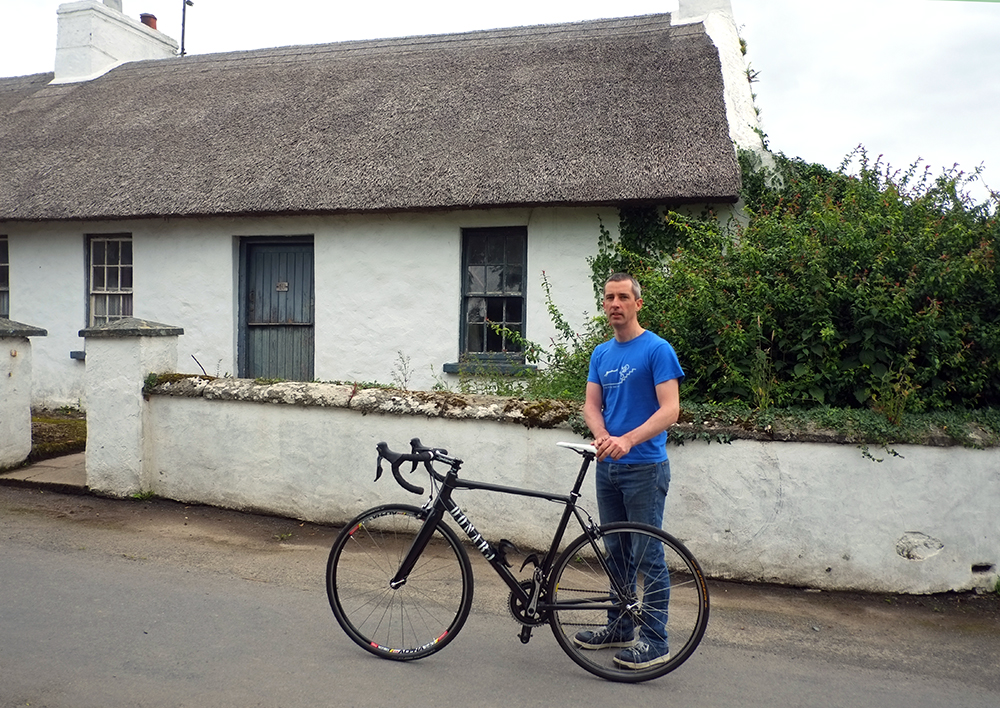 What comes to mind when you think of carbon fibre bicycle frame production? This is not a test. Just think about it for a moment and form a mental image.

Me, I picture something clinical, sterile. Lots of computer modeling. A team of engineers. Sophisticated machinery. Automated processes. A facilities that is more lab than workshop.

What I don’t picture is - oh, I don’t know - a stone cottage in the middle of the Irish countryside? In which an unassuming, youthful-looking man toils alone, in a low-ceilinged attic workshop, sculpting strips of something black and tough and a little gooey into the shape of a bicycle. Yet that is what I get when I visit Owen Byrne at Donard Cycles.  Even having known, roughly, what to expect from our email and phone conversations, I am still taken aback. 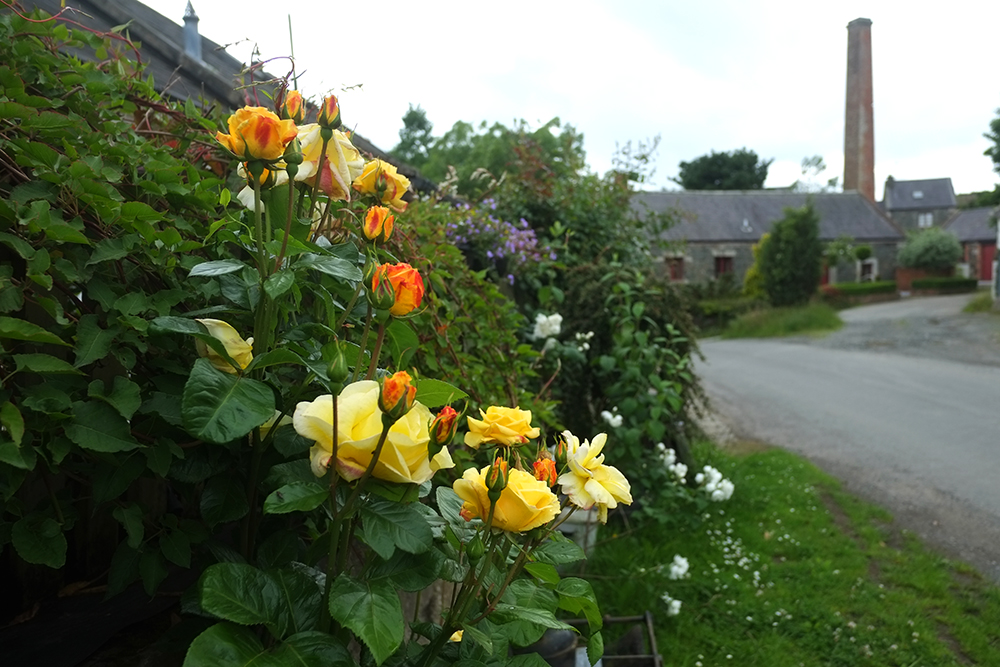 To start with, there is the setting. Named after Slieve Donard that looms nearby (Northern Ireland's tallest peak), the builder resides in the picturesque countryside along the Strangford Lough. It took me several modes of transportation and several hours in pouring rain to get there, but the gorgeous views were well worth it.

On top of that, the workshop is part of a resurrected ghost village. There are lots of such places all over Ireland: clusters of derelict stone cottages that were once settlements, usually situated on a cross-roads, around a mill of some sort. Once the mills closed and the crossroads lost their centrality, such places were gradually abandoned. Some were left to slowly decay, out of sight, deep in the coutryside. Ohers were knocked down and turned into new developments.

This particular settlement, however, was fortunate enough to meet an alternative fate: It was rescued by local residents. Most of the derelict buildings have been refurbished and made habitable again. It is now a thriving, yet secluded, little neighborhood that is like something out of a picture book. 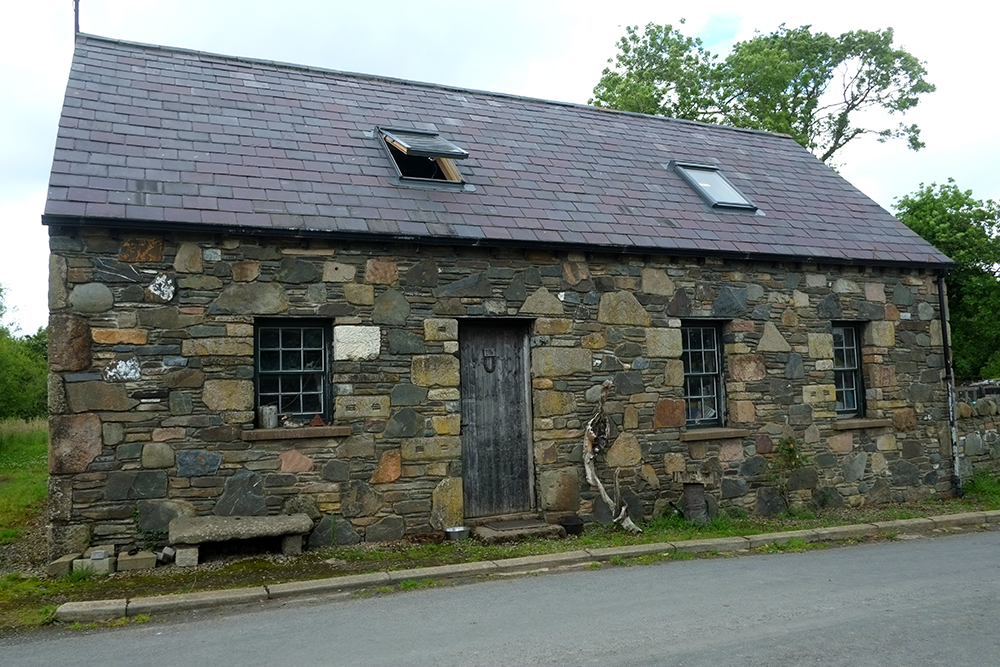 Once not much more than a stone shed, the Donard Cycles workshop has somehow been transformed into a two-story structure with a multitude of skylights. Surrounded by a grassy yard dotted with wildflowers, it stands beside a pond that dominates most of the views from the workshop windows. 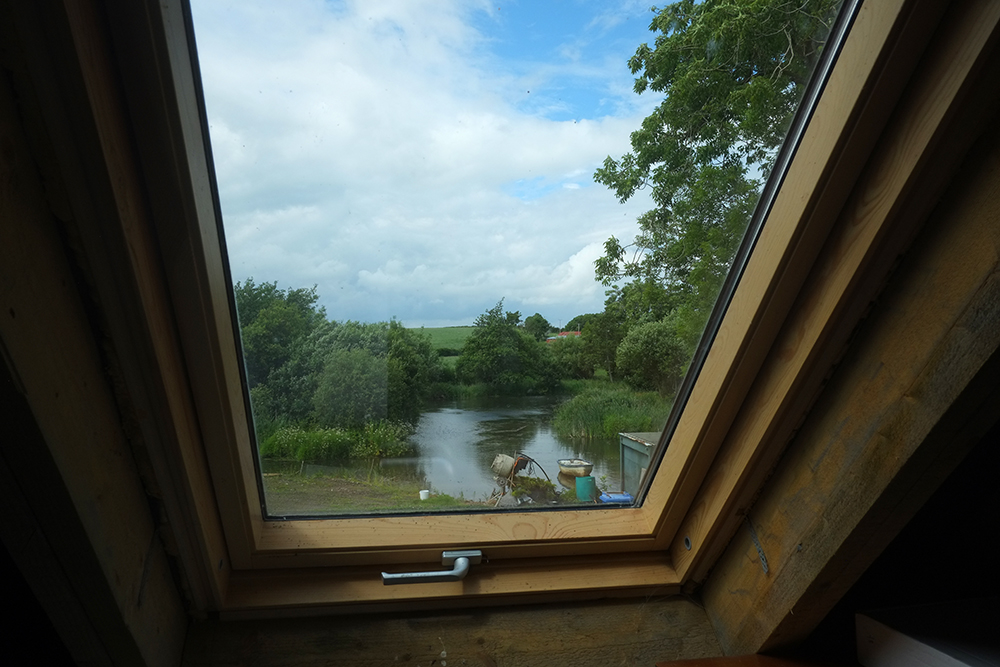 It is this that the builder gazes at as he works: making one carbon fibre prototype frame after another, in a sharply focused R&D sequence that will culminate soon in a polished product available to the public. 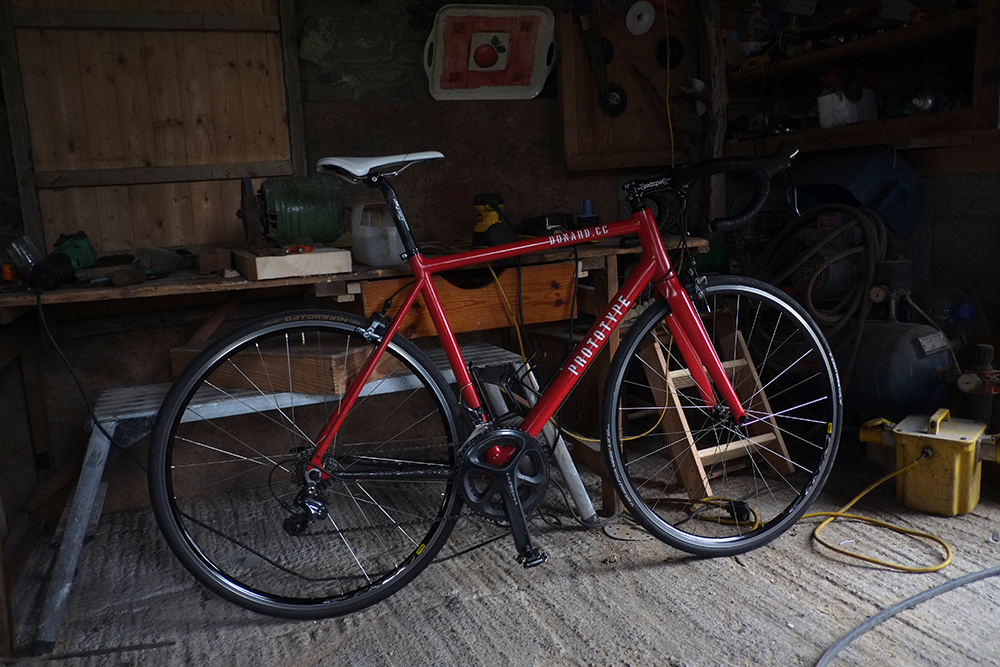 In the dim, yet surprisingly airy interior (best air quality of any framebuilder's workshop I've been in), I am permitted to inspect several early prototypes - some intact, others chopped up and modified, all looking more like papier-mâché sculptures than machines. 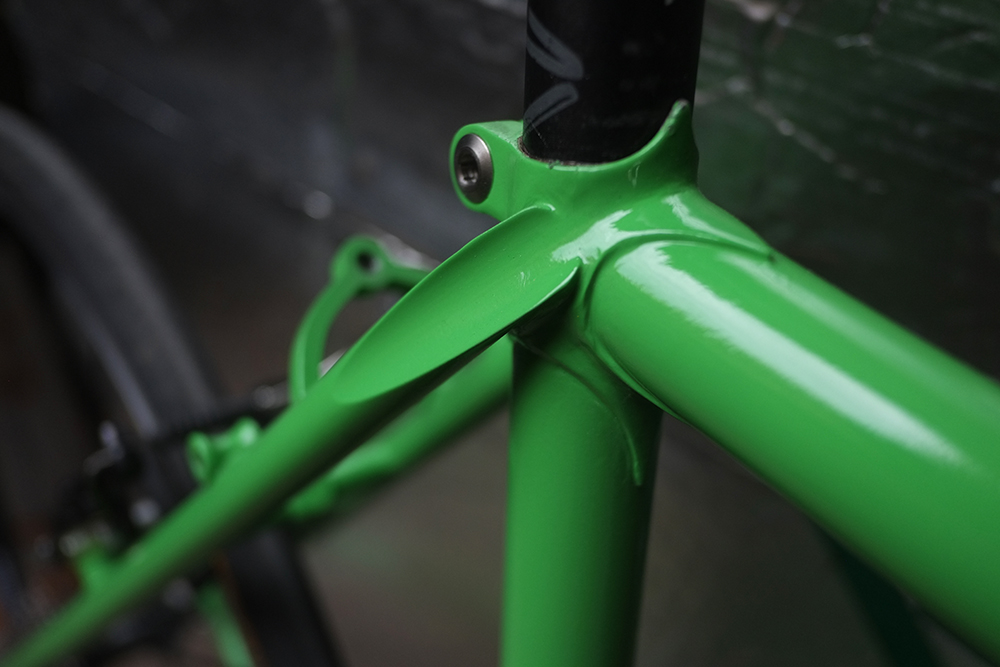 There is familiar, steel stuff, as well. As well as a frame jig, vices, and all the tools of the trade I'm familiar with. 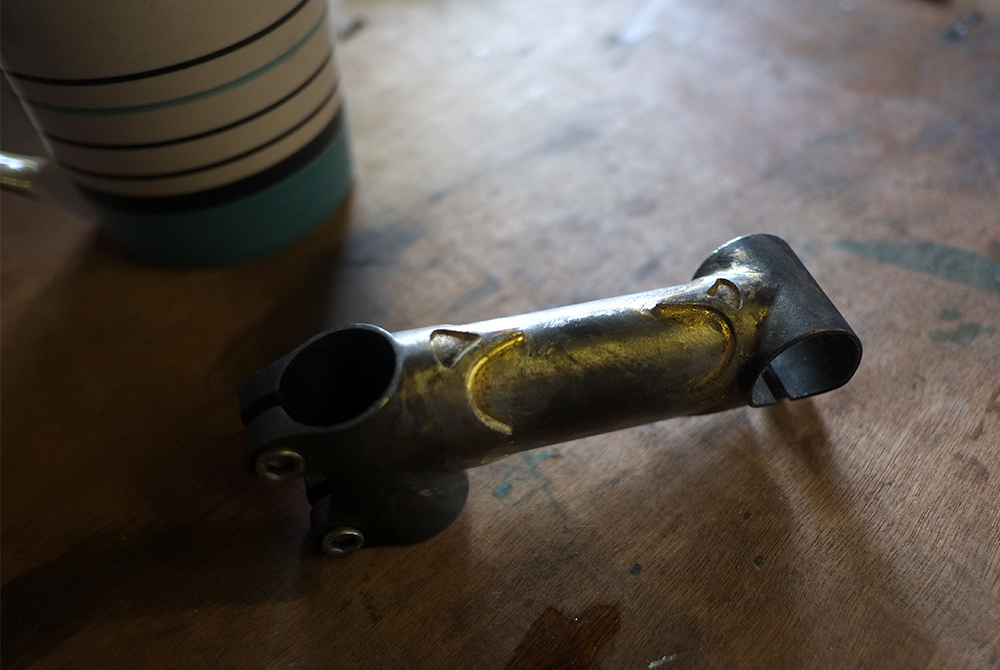 As a hobby at first, Owen began building bicycle frames in 2012. 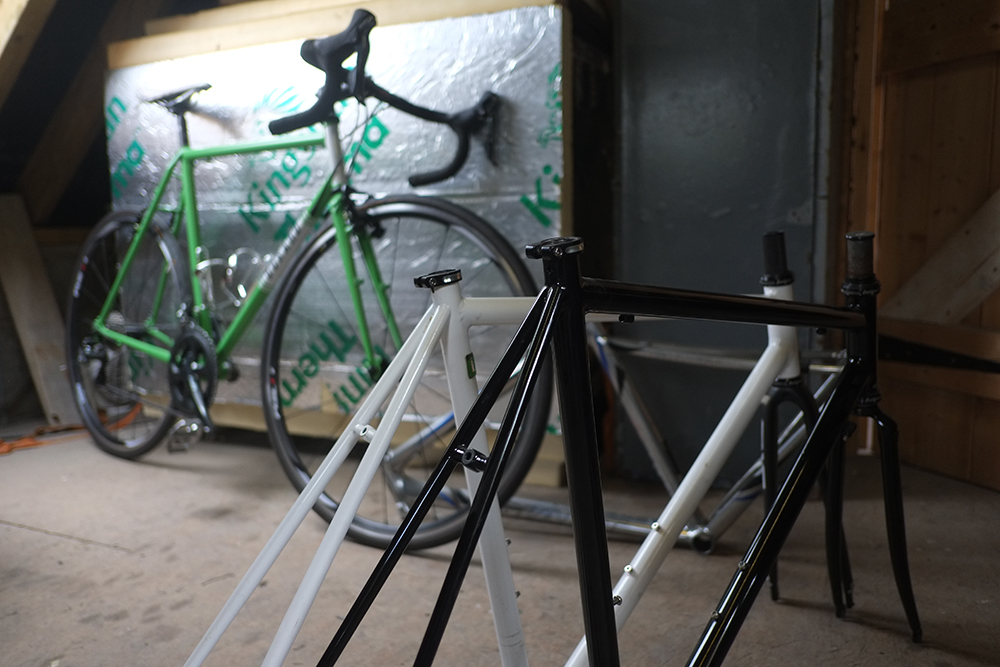 But the metals he started out with were practice for his ultimate goal: to work with carbon fibre. And last year that process finally began. 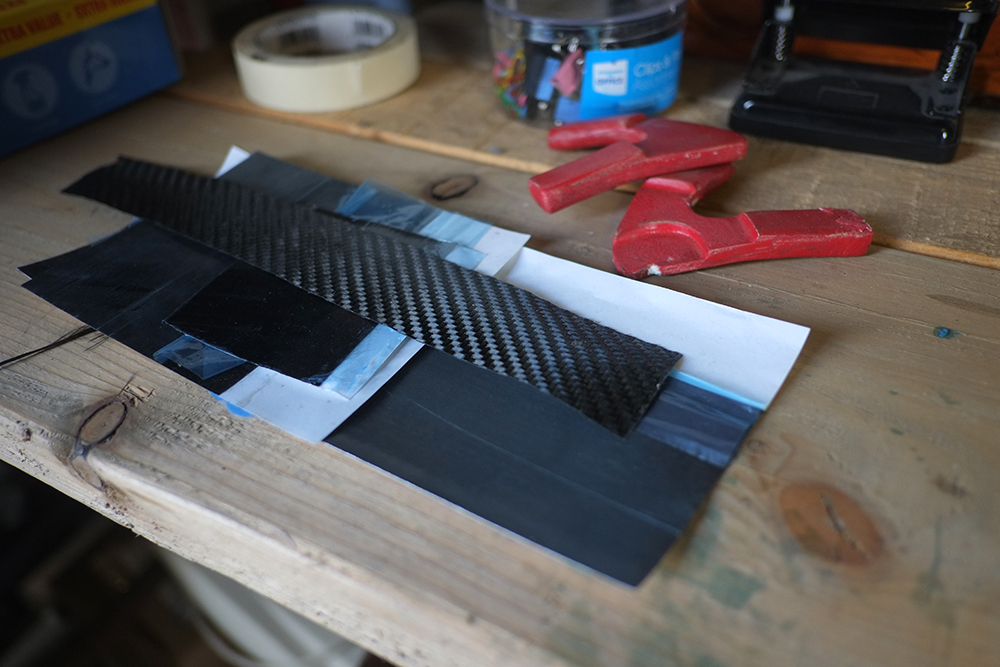 The carbon stuff is everywhere - finished tubes, and strips, and parts of frames - placed so casually in this quaint workshop setting my mind finds it difficult to accept as real. Overwhelmed but curious, I do not know where to start with my questions. I jump from one topic to the next. I start touching and sniffing everything. How does this work? What does this do? But how? But why? But what for?

"Want to try making a tube yourself?"

Making a tube... I imagine some sort of giant mold is involved. But no, the process is all handwork. 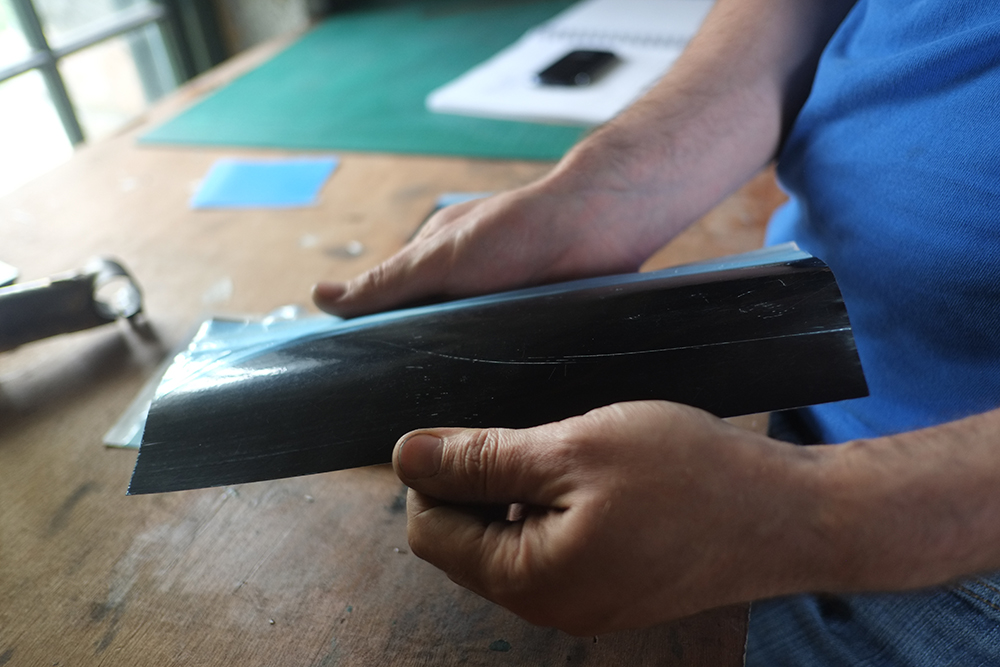 To start with, the carbon comes in strips, sheets, or ribbons of epoxy-impregnated fibres. There are many kinds - that is to say, they come in different thicknesses and types. A strip of carbon fibre that is unidirectional resembles woodgrain and is a truly weird thing to hold and play around with. 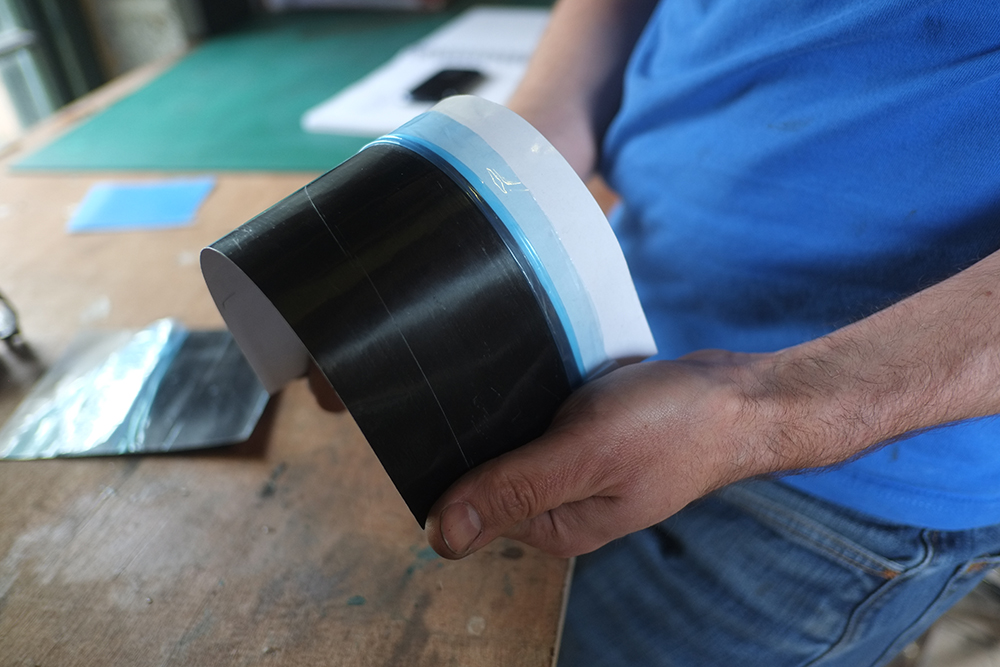 Flexible in one direction, it resists flex in the other. The unidirectional fibre alignment makes it possible to control directionality of strength and stiffness to a fine degree, depending on how you place the strips. 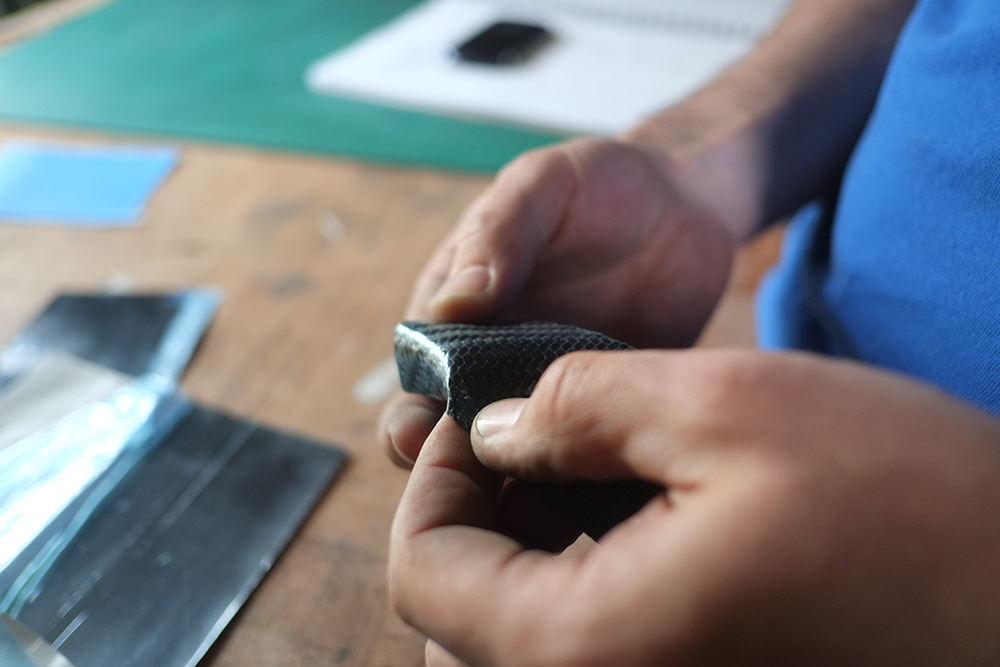 Woven, fibre, on the other hand, is - as the name suggests - a weave, offering greater versatility but less directional control. Both types of carbon fibre strips are available in different thicknesses and strengths. And they can be layered in different numbers and combinations depending on what effect the builder wants to achieve. 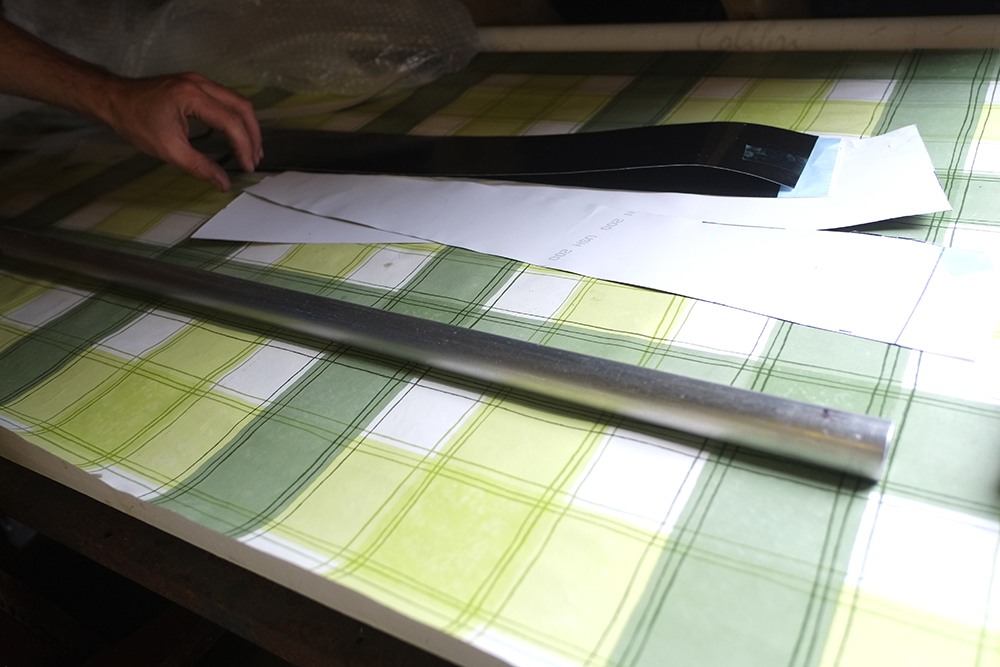 To make the tubing, the builder begins by wrapping the strips, one at a time, around an appropriately shaped aluminium rod made specifically for this purpose. At Owen's invitation, I tried my hand at this part of the process. 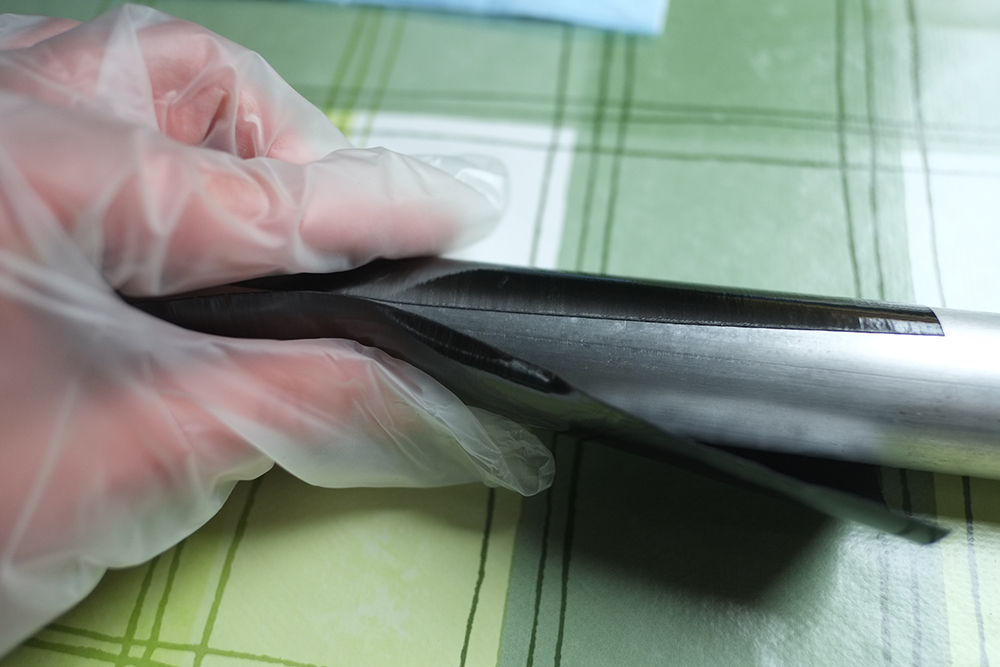 At the start, the carbon fibre strips felt a lot more difficult to control than I expected - an uncooperative combination of stiffness and flexibility that refused to curve and lie flat around the aluminium rod without bunching up horribly. However, I soon realised that both materials were quite responsive to body heat; they needed to be gently warmed up. The more you touch the aluminium, the more inviting the surface becomes to the carbon. And the more you coax the carbon with your hands, the move lively and pliable it becomes. 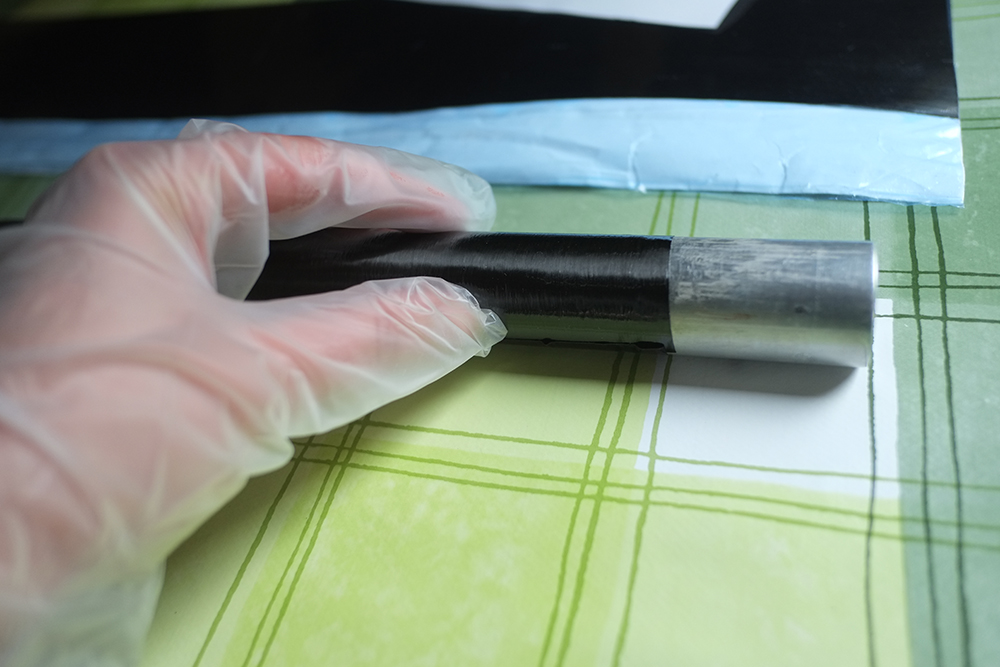 So the wrapping process basically involves a lot of kneading and smoothing, smoothing and kneading, until you have an evenly wrapped tube. Once wrapping is completed, the tube gets placed in a vacuum bag for compression, and in an oven, where it undergoes a number of heat cycles at varied temperatures. 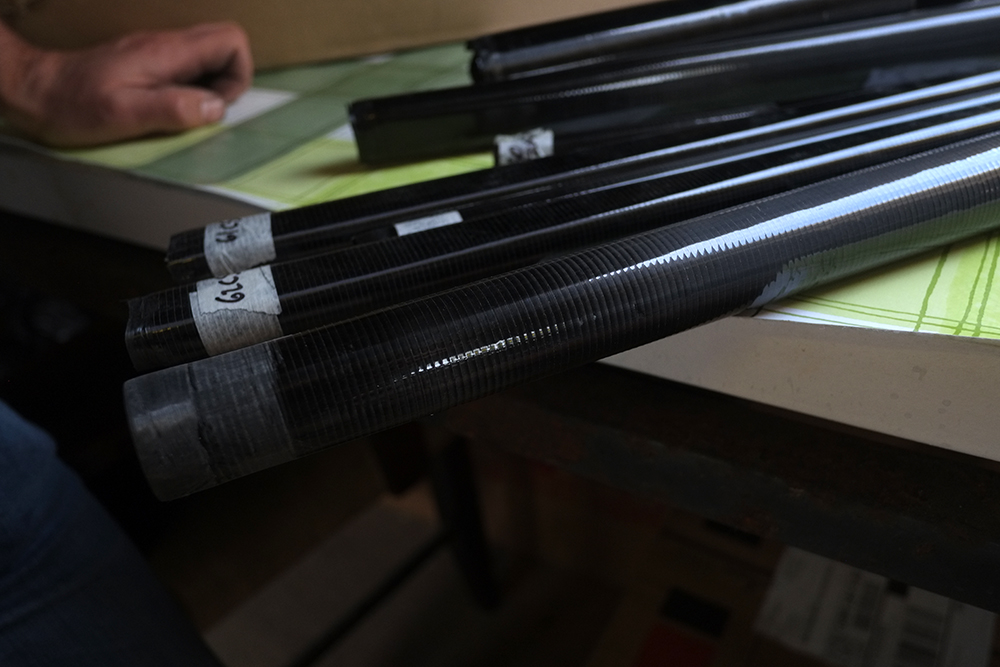 It is a time-consuming process, both design-wise and production-wise. But the results is a handmade and highly customised tube set, which can then be fitted onto a jig just like steel tubing, for the frame to start being built. 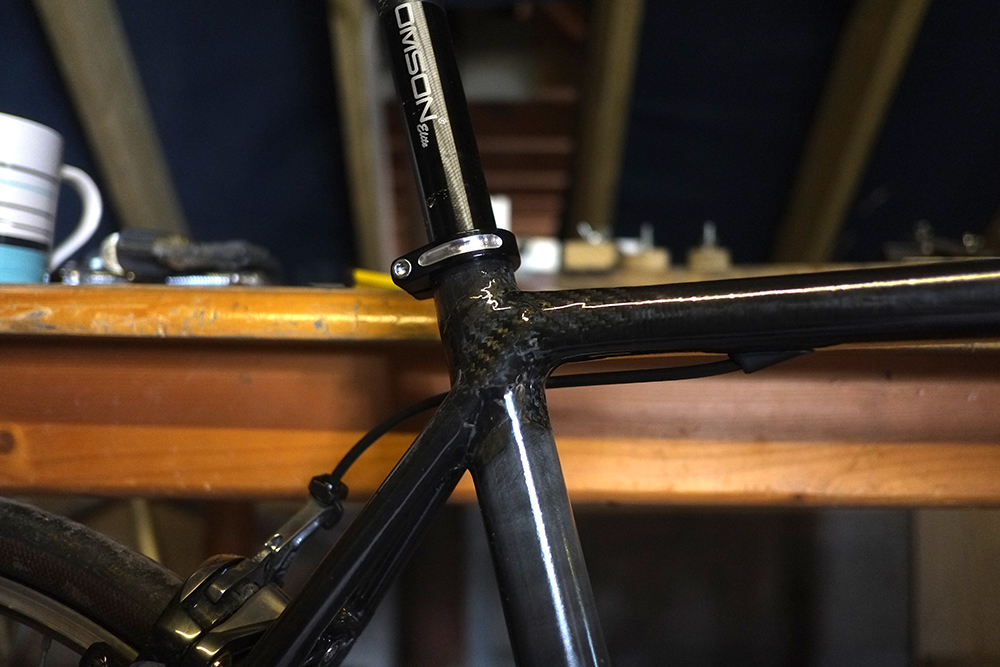 Though I did not watch this part of the process, I understand the frame is built by wrapping more fibre strips around the joints, in leu of brazing or welding. Here again, the builder has complete control over the type of carbon fibre selected, its directionality, as well as the amount of material used. Between designing the geometry, making the tubing from scratch, and then wrapping the joints, the possibilities for playing around with frame characteristics seem infinite. 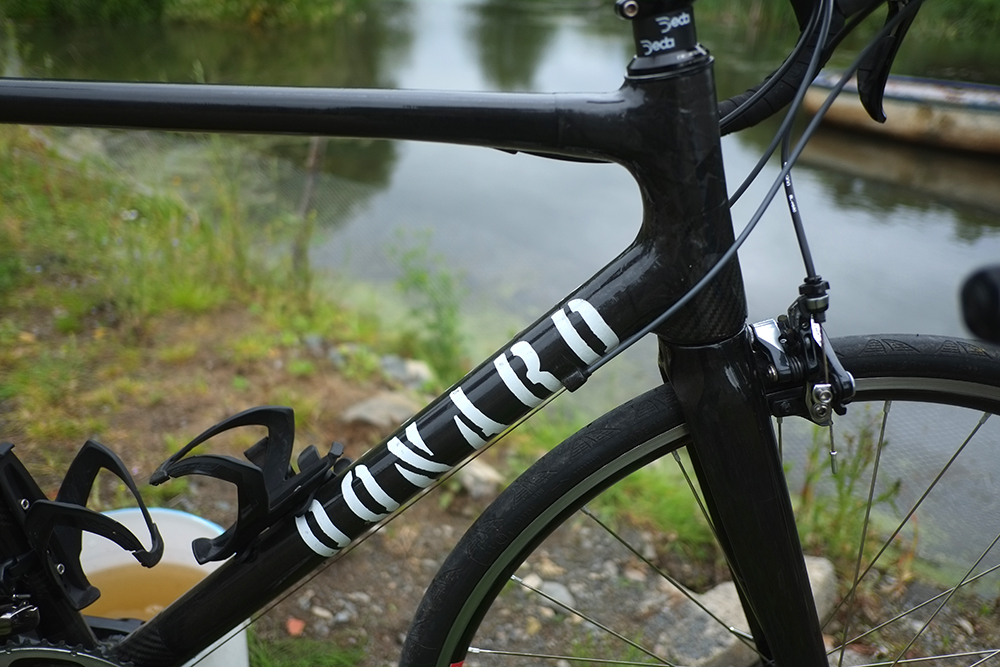 And my point here was not to attempt to explain the carbon fibre frame production process (which would take at least a couple of book chapters to describe properly!), but to communicate the two things that struck me about it the most from visiting Donard: (1) how utterly hands-on it is, and (2) how much opportunity for customisation it offers. And so before we even got to addressing the question of why Owen was drawn to making carbon bikes in particular, I already knew the answer. Or at least one of the answers. 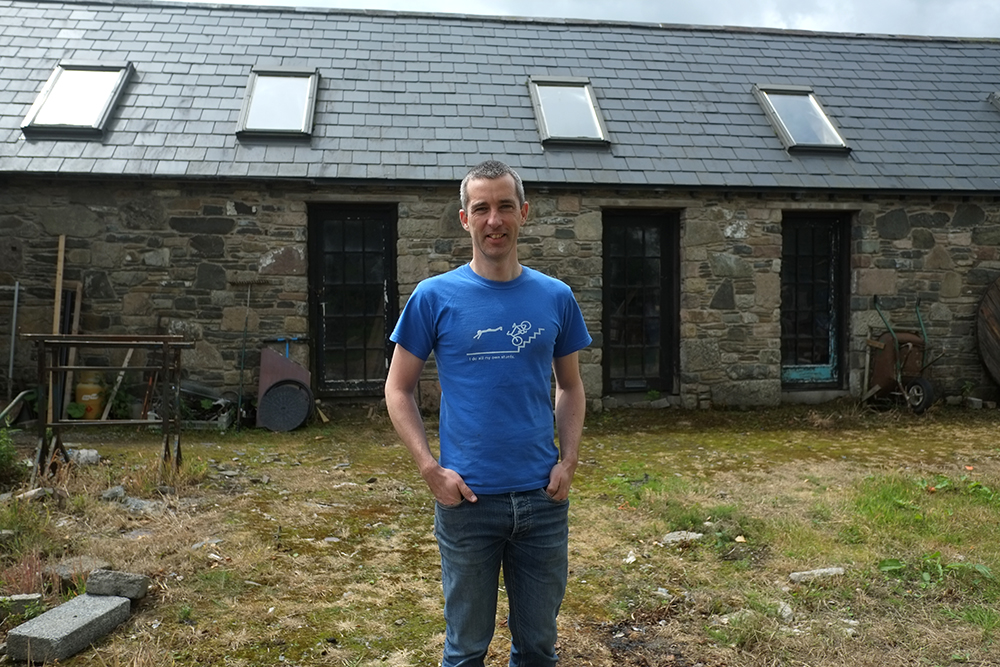 Because, let's face it - being interested in a material's hands-on and customisable properties isn't enough to work with something as complicated and sensitive as carbon fibre. And so it might clarify matters to know that Owen has a PhD in Physics, with a specialty in high temperature super conductors and a keen interest in composites. And as a cyclist with several decades of experience (distance cycling, commuting, and racing across various disciplines), it was only a matter of time before he felt drawn to applying his skills to the bicycle. After some initial training in framebuilding with Downland Cycles in England and some practice with steel, he set to work with carbon fibre. Back in Ireland, he did not have any teachers, or the presence of a framebuilders' community from which to seek support. But he read a great deal. And then he read some more. And then he began experimenting. Owen sees carbon fibre as a material with greater potential than we yet credit it with, in particular for custom work. And he feels that he understands that math(s) and physics behind carbon fibre's behaviour at a level that can be applied to bicycle frame production, with exciting results. Results he is nearly ready to show.

The cycles which now fill his shop are aesthetically unpolished prototypes. But the first ready-to-view bike, complete with professional paint, will be unveiled at Lap the Lough event - a 100 mile ride around Lough Neagh at the end of August. So look for it there in person, or stay tuned for photos. 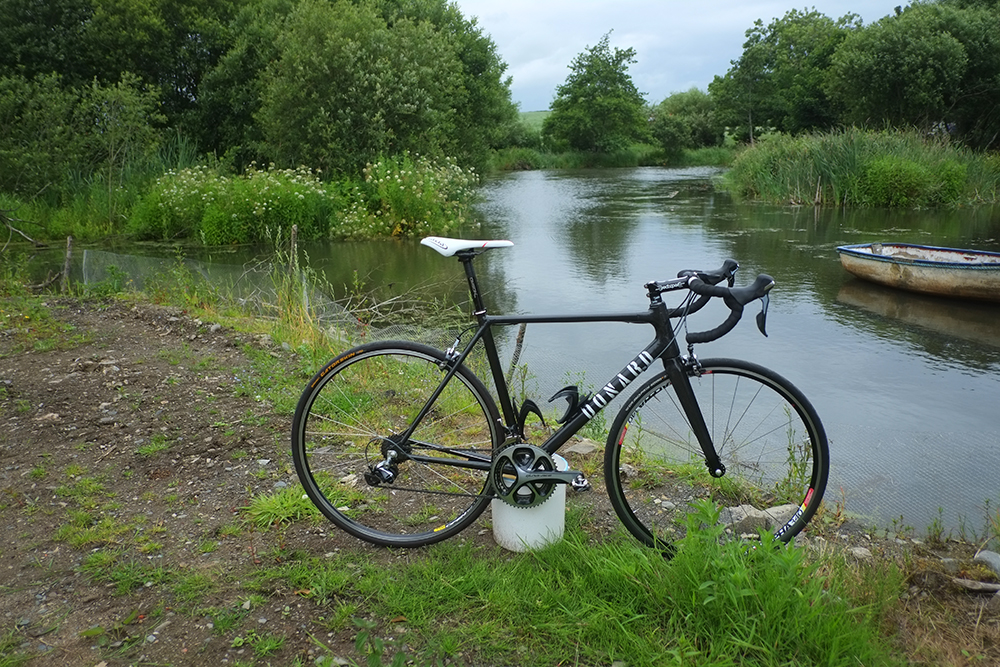 In the meanwhile, Owen asked whether I'd like to try the latest prototype. Considering the bike was a good 2 sizes too big for me, equipped with a frighteningly narrow saddle, and sporting clipless pedals incompatible with my shoes, I politely declined. But of course this is Ireland. And so a "go on, g'wan!" situation ensued,  with assurances of "Sure, we'll just lower the seat - you'll be grand!" given. So, long story short, of course I ended up riding the bike. The geometry was all wrong for me and the fit was positively Riverdellian - with bars above saddle and my torso stretched out to the max. But nevertheless, ride it I did, for some miles over gently rolling hills. Alongside, on one of his other prototypes, Owen glanced over now and again, questioningly.

Main impression? Comfortable. In a "can't feel the texture of the ground" sort of way.  Not the typical feedback one expects of a carbon bike, and I guess that is the builder's point: They can be anything you make them. And although the geometry and fit put me in an awkward position, the bicycle appeared to get lighter when going uphill. What can I say? I am certainly intrigued. And would love an opportunity to test a Donard in my size, to form a fairer impression. But of course to make one in my size would not be enough, according to the builder. He would want to know how much a rider weighs, to watch how they ride, to understand the ways in which they stress the bike, and their approach to handling. He will not be making bicycles designed to please the hypothetical average rider. He is interested in pushing limits, in the context of making frames that are as rider-specific as possible. And in making them from scratch - from the tooling, to the tubes, to the finished product... Then ideally, selling them at prices he describes as "accessible for locals."

This admirable approach aside, my visit with Donard Cycles has given me a different perspective on carbon fibre framebuilding, which I hope has been of interest to you as well. I thank Owen for his hospitality and look forward to seeing his Lap the Lough bike in action.