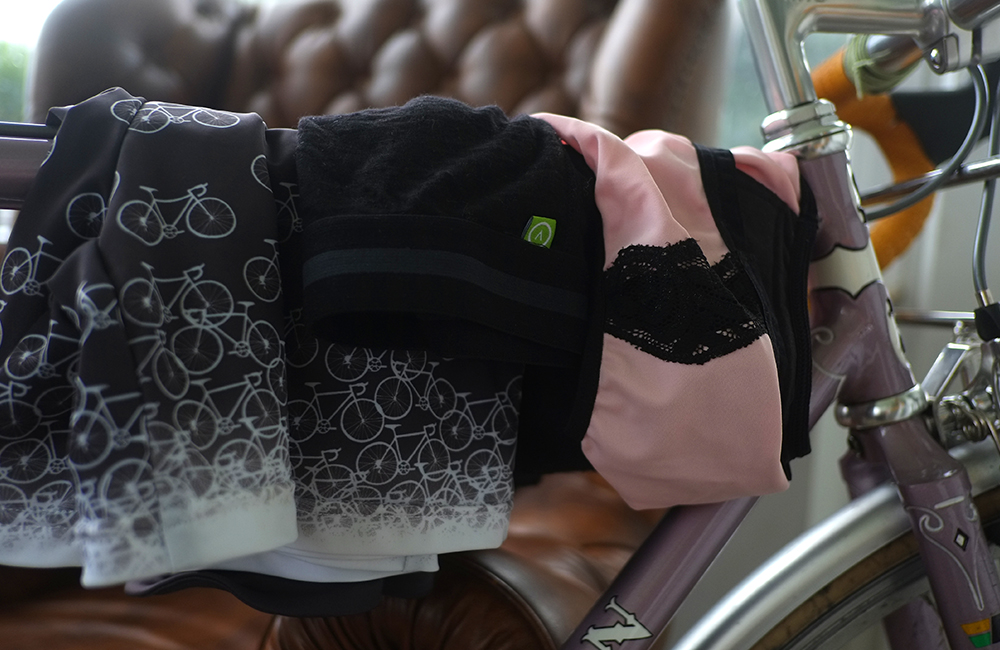 The phenomenon of cycling-specific underpants - as distinct from performance-oriented cycling shorts - is a fascinating reflection of today's hybrid bicycling culture. Riding a bike for transport is more popular than it has been in some time. But it is also different from what it was in its original heyday, many decades ago. On the whole, commuting distances are longer. The layouts of the roads invite a more aggressive riding technique. And the bicycles that many use for transport these days have morphed to accommodate - from the stately upright steeds they once ubiquitously were, to more sporting machines that encourage "active" postures.

It is an era of post-sport transport, and it blurs boundaries. Boundaries such as those between rural commutes and distance road rides, or between navigating busy city roads and training for criterium races. Consequently, the boundaries between everyday attire and cycling-specific technical garments are likewise blurred.

Do you “need” cycling underpants? The answer depends on a variety of factors, including how much time you spend on the bike for transport, your position on said bike, and the intensity of your pedaling. Suffice to say: If your underpants are letting you down in the comfort department, yet you prefer to cycle in ordinary clothing (or at least what looks like ordinary clothing), it is something to consider. Luckily, this breed of special garment is now available from a number of manufacturers and in multiple varieties. Over the past few months I have tried the following three and present to you my impressions: 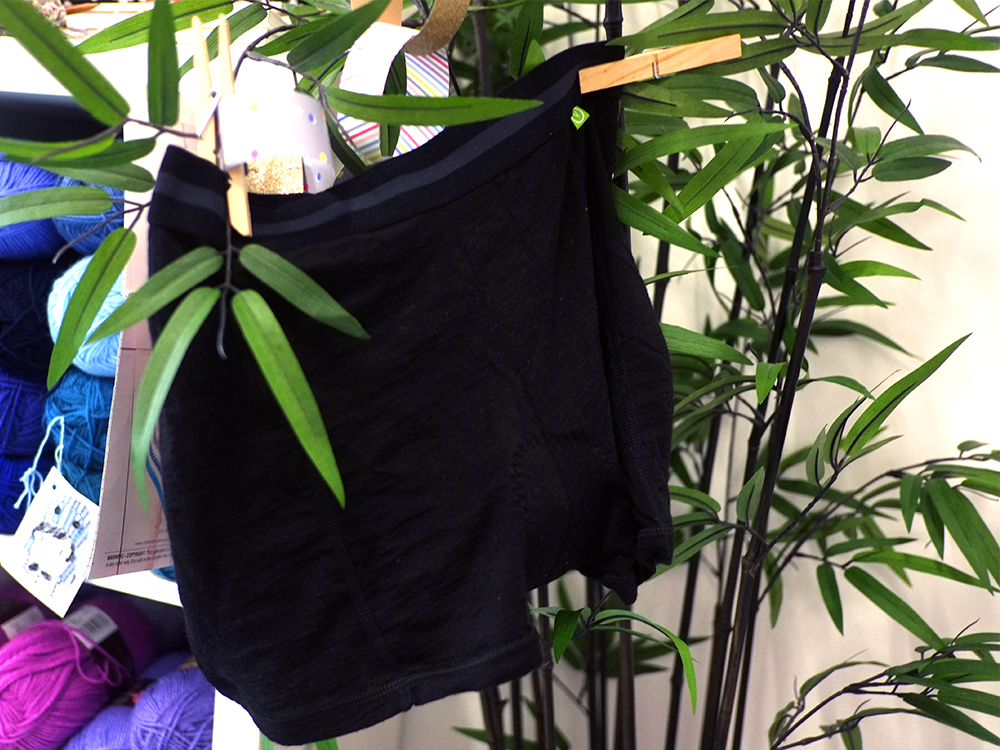 As a fan of Vulpine merino jerseys and socks, I was hoping for something equally simple, lightweight and cozy in the underwear department. I was not disappointed. The padded merino boxer (available in men's and women's versions) is everything the name suggests: It is a boxer-brief, in a merino fabric, with a chamois insert.

Aesthetically, these are very low key shorts. No frills, no doohickeys, no bright colours. But the wow factor is in the feel. The soft, lightweight 150g merino feels amazing against the skin. The form-fitting and stretchy cut contributes to the comfort. The elastic at the waist is wide enough not to cut into tummy fat. And tiny silicone grippers prevent the edges of the legs from bunching up under trousers. The length is pretty short (think "boy shorts" for the women's version), which makes them suitable even for mini skirts, but long enough to prevent inner thigh chafe. 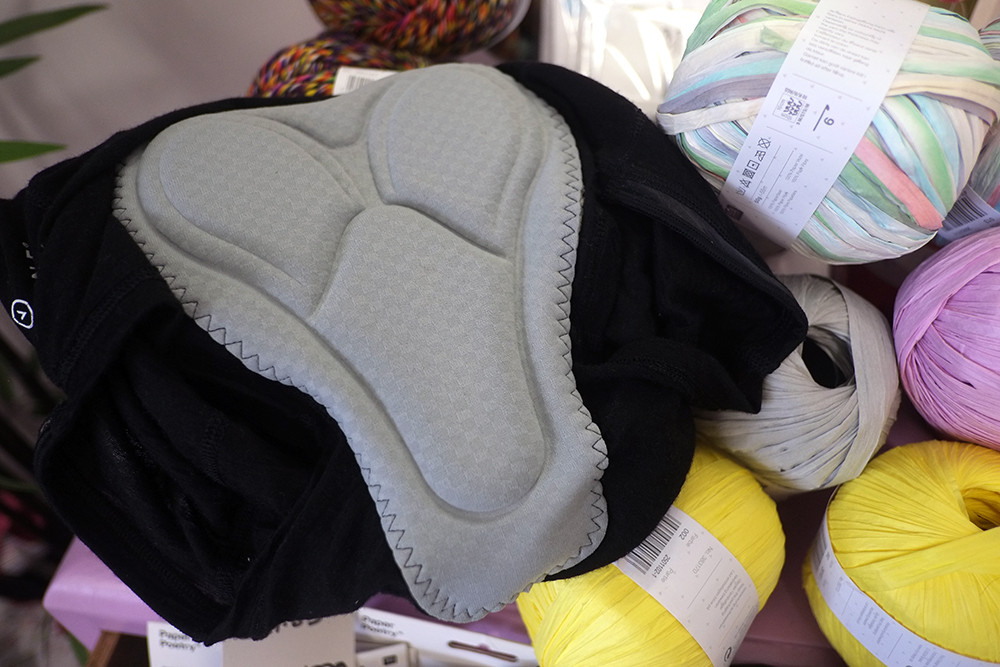 The gray, low-profile CyTech pad (gender-specific) provides coverage suitable for any cycling position, from bolt-upright to racing fit. To me it feels very comfortable for distances for up to 20 miles.

That said, I do not find the manufacturer's claims of the padding being "invisible through outerwear" to be 100% accurate. Under some trousers and skirts that I own, the pad definitely "prints" at the rear. Not the end of the world, and the comfort these shorts give me is worth it - but it does mean I have to choose my wardrobe carefully when I wear them. 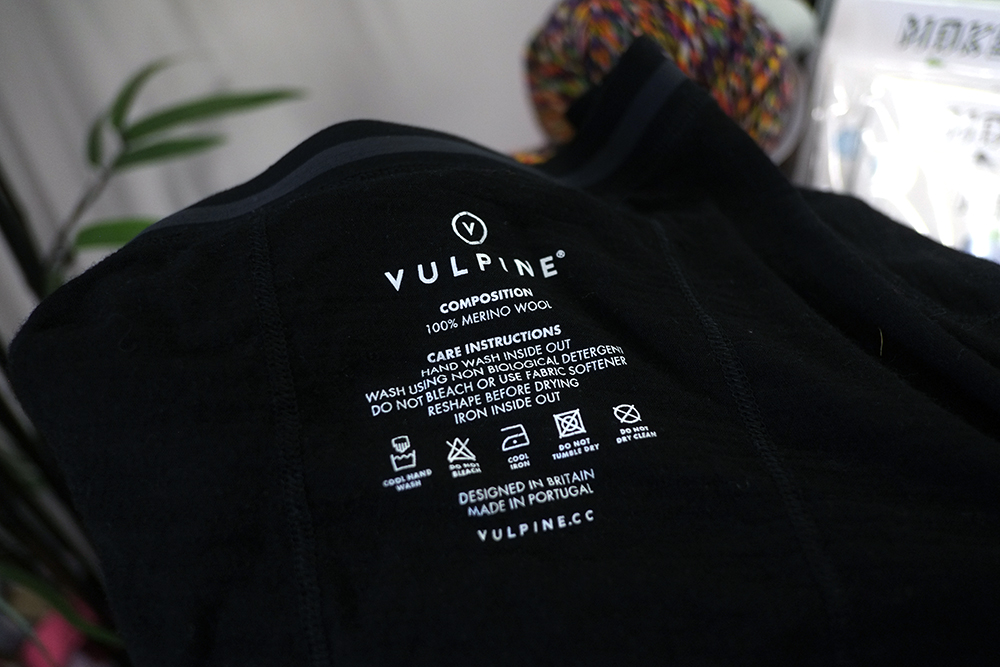 Off the bike, the merino fabric feels truly splendid and the cut makes them comfortable to move around in. However, I am aware of the pad and so it definitely doesn't feel quite like wearing normal underpants.

Verdict: While not perfectly stealthy under all garments, for long distance commuting I find the Vulpine Merino Boxers extremely effective. As a fan of fine merino wool, I also find the choice of fabric ideal. Available in black or navy and priced at £49GBP, these shorts are currently on sale for £30. 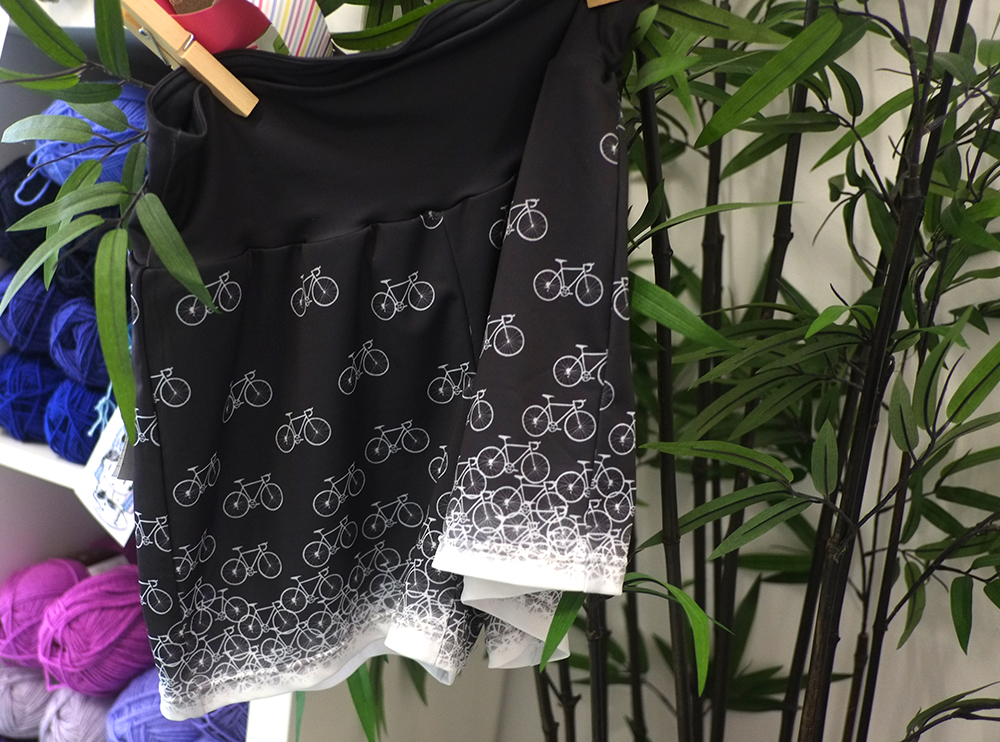 Not all cycling-specific underpants are about padding. Some are about coverage - particularly underneath skirts and dresses. On that front, the Oregon-based Ivalieu makes a variety of "pettipants" to help be-skirted cyclists avoid not only flashing, but, more importantly, what she so eloquently terms "the ol' sticky thighs issue." Ah yes.

The pettipants are available in several styles and a variety of prints, the most relevant to me being the Sport - which are basically stretchy, unpadded bicycle shorts as I remember them from the late 1980s-early '90s. I had not realised how much I missed them until I took a spin in the updated Ivalieu version. 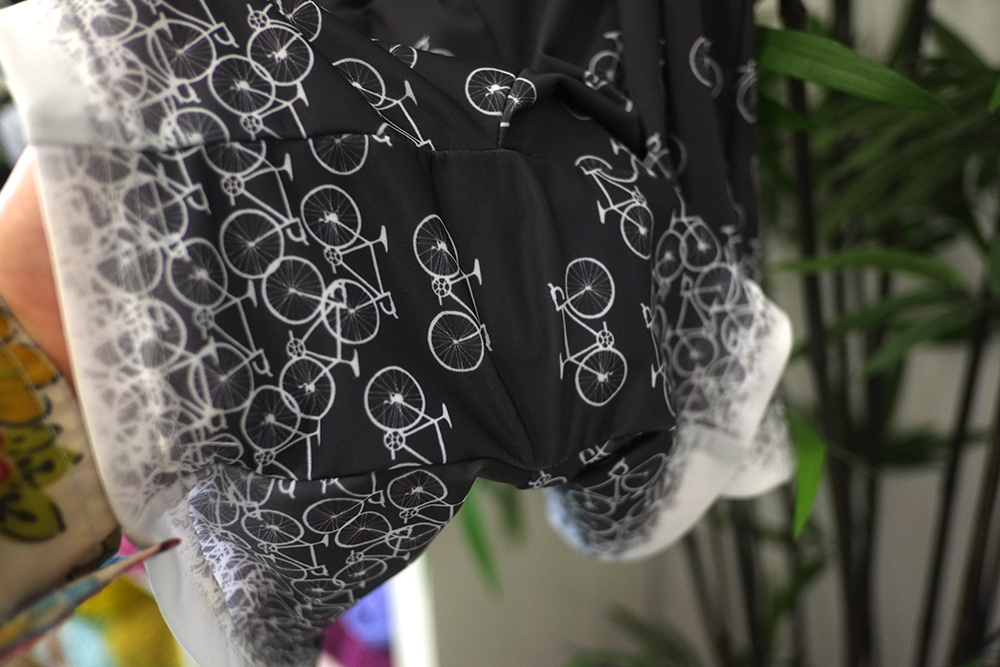 Like the "bike shorts" we wore in elementary school, the Ivalieu pettipants are great for both pedaling and running about in, as well as for climbing trees and fences. They prevent inner thigh chafing on hot days and minimise up-skirt curiosity.

Unlike the bike shorts of yore though, these have a wide, comfortable waistband, and a nice gusset at the crotch that keeps seams from pressing into privates. The nylon-spandex blend fabric is also quite a bit nicer to the touch than the older stuff was, and the hand-sewn, made to order quality is top notch. 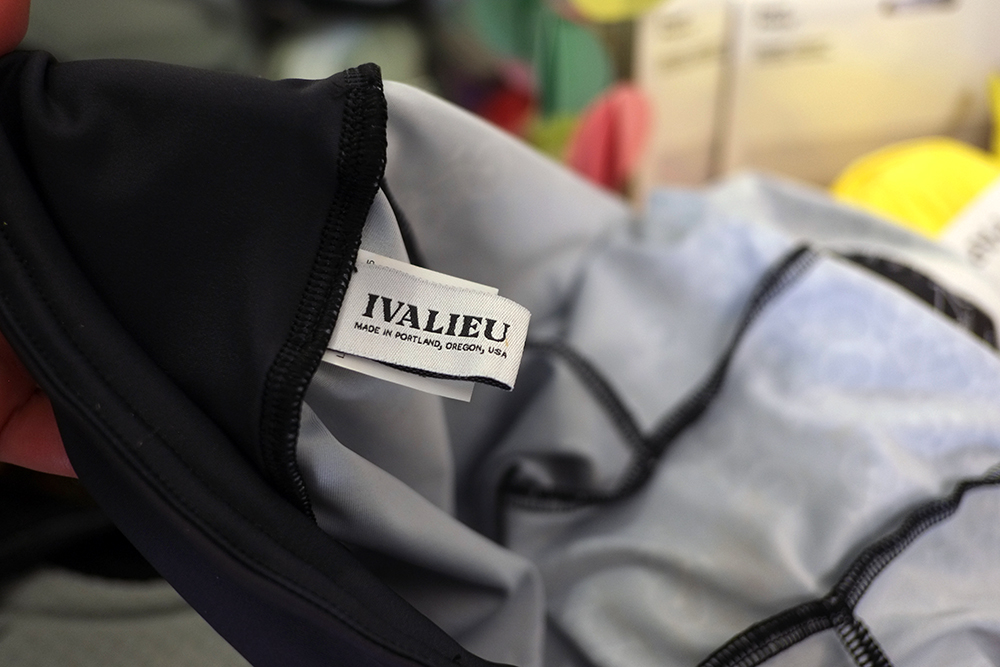 On the bike, I find the Ivalieu shorts pretty great for upright cycling in a skirt, especially on hot sticky days. Off the bike - while the pettipants in of themselves are comfortable I would like some sort of breathable lining over the gusset area to be able to wear them all day - especially in an indoor, sitting in a chair type of situation. Direct spandex-to-crotch contact, for hours at a time, is not a good setup for me. And while not everyone is sensitive in this regard, on the whole I believe a lining would be a beneficial addition to this garment.

Verdict: If you miss those unpadded bike shorts of your pre-teen years, there is now a hand-sewn version of them that is gussetted, silky in feel, and available in a variety of funky prints. Made to order starting at $49.50 USD check them out, along with other cool models, on the Ivalieu website. 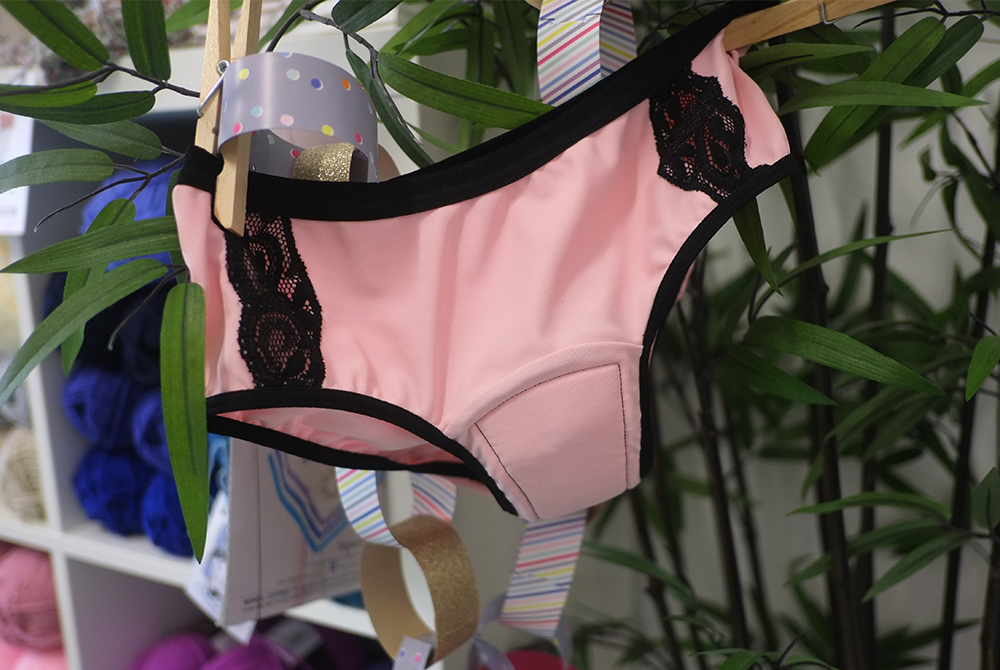 There are cycling underpants. And then there is cycling lingerie. That's right. And I'll be honest: when I first started seeing Bike Nicks pop up on social media, I assumed they were a novelty item that would not be of much use to me. But having tried a sample, I was at once reminded of the "don't hate me because I'm beautiful" meme. And beautiful these knickers certainly are. In fact - and I can't decide whether this is funny or sad - they are by far the most attractive and "sexy" pair of underwear I currently own!

Founded by yoga instructor Lili Millar, the Bike Nicks range is designed for cycling and is meant to be as pretty as it is comfortable. And, on the comfortable front, it succeeds more than its aesthetics suggests it should. The fabric - which is a synthetic satin with lace trim - is surprisingly stretchy when worn. It is underwear that looks like lingerie but feels like an athletic garment. 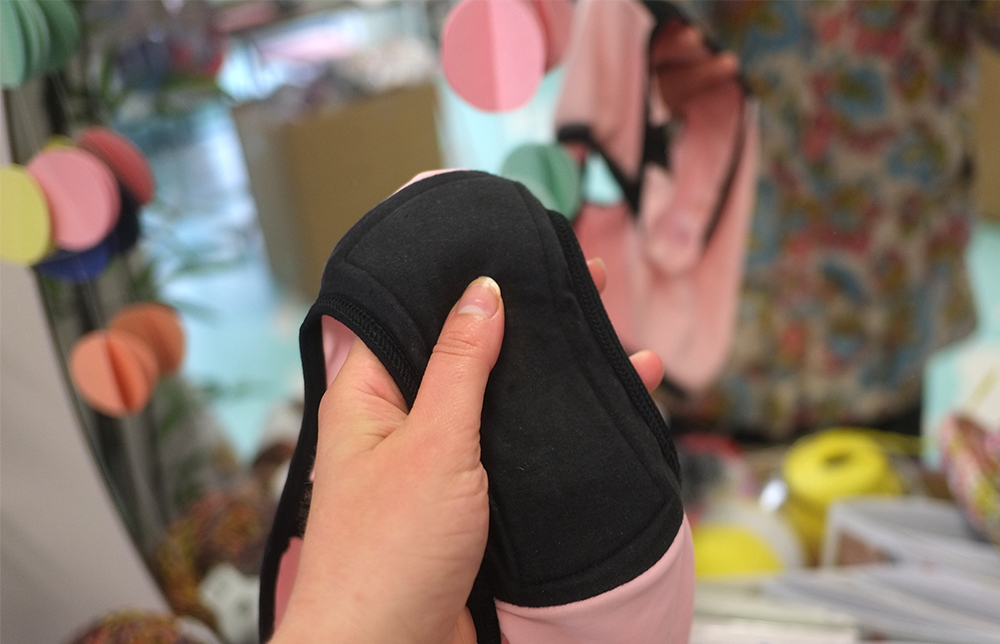 The Bike Nicks are padded for on-the-bike comfort. However, the padding is not a full-on chamois, but a smaller, subtler pad that is about the size and shape of a standard sanitary napkin. And rather than sitting directly against the skin, it is sewn into a cotton lining. As a result, despite the cycling-specific padding, the Nicks feel like ordinary underpants when worn off the bike. I have worn them all day and forgotten they were there.

On the bike, I find the Bike Nicks enhance any ride I would have otherwise done in ordinary underpants. However, being knickers rather than shorts, they inherently do not address the problem of inner thighs chafing under skirts and dresses. And the elasticised leg openings - despite being very stretchy and soft - nonetheless eventually start to rub as the miles add up, especially in a leaned over position. Adding a boy short design to the lineup might be something to consider, for cyclists who have problems with chafing and put in lots of miles. 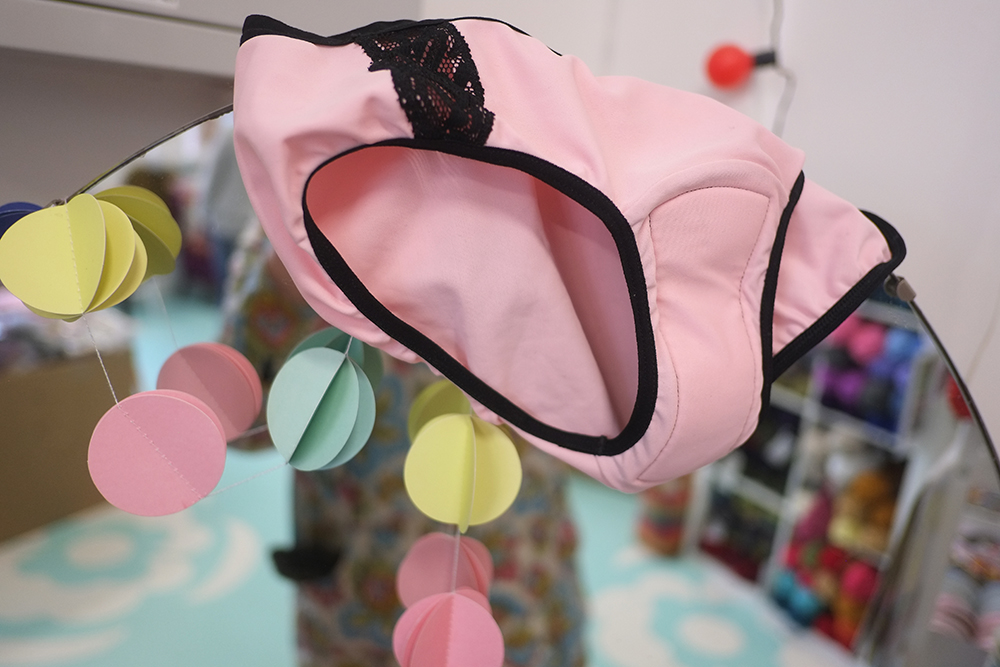 Verdict: While they haven't quite got the features of full-on chamois cycling shorts, if you are looking to add comfort to your transport cycling and spice up your underwear drawer in one go, Bike Nicks will do exactly that. UK-made and priced at £26.99GBP per pair, they are available in pink or black, and in a knickers or a thong style.

Speaking solely of my own preferences, there are elements of all three products that I love. The merino fabric of the Vulpine shorts feels divine. The length of the Ivalieu Sport shorts is just right for me. If I could combine those, with the minimal, lining-enclosed padding of the Bike Nicks, well that would be my perfect pair of cycling-specific underpants.

But on a separate note! As you might recall, the products featured here are being offered as prizes for the winners of the #BikePeeing (yes, I know) photo contest that was recently run here. After 6 finalists were selected, voting for the top two entries took place last week and I thank everyone who took part.

According to the readers' vote, the top two entries were:

However, I would also like to exercise my power (oooh) as hostess to override the vote and chose a third winner. And that would be:

5. In Plane View - submitted by TrailHound

I shall be in touch with the winners shortly. And I hope these reviews help them decide which of these fine underpants they would like as a prize.

With thanks to Vulpine, Bike Nicks and Ivalieu, for donating their products for this contest! I hope the reviews were helpful for anyone considering cycling-specific underpants. And I would be curious to know what other ones folks out there have tried - and if you've found them useful at all. When we start to add miles and challenging terrain to transport cycling, continuing to ride in ordinary clothing can be tricky. Whether we buy their clothing or not, designers who try to find solutions offer food for thought and new ideas, and their efforts are appreciated.