Toward an Understanding of Weight Weenie-ism 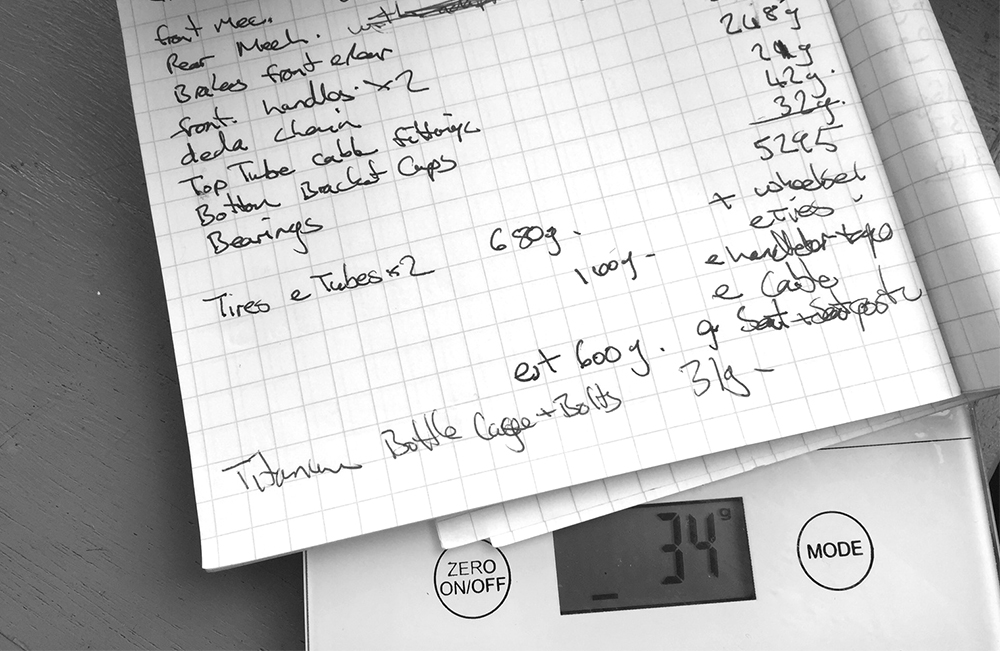 The other day a friend playfully referred to me as a "weight weenie," in response to my describing a bicycle as "exceptionally lightweight," in a perhaps over-enthusiastic tone. Now, in fairness, as someone who genuinely could not tell you any of her bicycles' exact weights, I think I am pretty safe from that diagnosis. Nevertheless, I do not like the term. Firstly, because - being the visual literalist that I am - I immediately picture a cocktail sausage (or similar) made of carbon fibre, which is not very nice imagery to pollute my mind with. But also, I think the term is becoming increasingly misapplied to the point that it's really just another way of policing each other's choices of gear. And that is a shame.

Wanting one's bicycle to be lightweight is not in itself weight weenie-ism. Nor is it a recent trend associated with the newfangled carbon-loving spandex-wearing racer-wannabe set. Indeed no. It is a reasonable preference that has existed since bicycles entered mainstream circulation. And you can see it in the earliest bicycle advertisements. Even at the turn of the 20th century, manufacturers boasted of their leaden machines being "lightweight" (compared to the competitor). This was not limited to the realm of racing bikes, either. Particularly memorable and funny is a vintage poster I once saw in the garage of a local bicycle collector. It was an ad for an early Tourist-style roadster (made by the likes of Triumph, or Royal Enfield, or Rudge - I forget which) - complete with 28" wheels, rod brakes, mudguards, chaincase, frame pump, carbide lamps, saddlebag, the works. And it was shown being happily pedaled uphill by a deliberately feeble-looking young gentleman. The caption suggested the bicycle was so light, it practically rode itself. I can only imagine!

By the 1920s and '30s however, bicycles began to live up to claims of light-weightness (hence, the Classic Lightweights). If you browse through British manufacturer catalogues from as early as the 1920s, you can usually see the weight figures listed - including for transport bikes and "ladies bikes" - and they are impressive even by today's standards. My 1930s Claud Butler mixte, for instance, weighs "inside 26lb," complete with mudguards and hub gearing. While several diamond frame racing bikes in the same catalogue are quoted as weighing just 18lb.

As author Jan Heine tirelessly documents, weight savings were also of concern to French constructeurs from this era. Sub-20lb randonneuring machines (complete with mudguards, fat tyres, racks, and dynamo lighting) were not uncommon in as early as the 1930s. Needless to say, there was no carbon fibre involved. But great care was taken with the design and production of each component to achieve this.

My point here is, that lighter bicycles have always been seen as desirable, both within racing culture and outside of it. If anything, the bicycle industry today is historically unique in that there exist factions of it which actually downplay weight, or even suggest that heavier is better - mocking competitors for being weight obsessed.

It is not difficult to trace the origins of this backlash. The competition for increasingly lightweight bikes is what eventually led to the introduction of new materials and building methods through the 1990s, culminating in the toothpaste-welded aluminum and the carbon fibre that dominates the current cycling landscape. Performance-wise, there is no arguing that some technological advances of the past decades have been beneficial. But in return, a lean, mean, efficient sort of soul-lessness has come to characterise contemporary mainstream bikes - which for many, is at odds with the spirit of cycling and with the essence of the bicycle itself.

And while in saying this I simplify the situation in the interest of time, I do not think it is out of line to suggest that, somewhere along the way, concern over a bicycle's weight has become confounded with this new plasticky, soul-less aspect of things.

Which is ironic, considering that on the whole bicycles and bicycle parts on the market today are not actually all that lightweight, in the historical scheme of things. And that - if you pay attention to component weights especially - you might be surprised to notice that the carbon fibre stuff is not always the lightest option. Of course, to pay attention to component weights (especially to the point of keeping a record in a spreadsheet or notebook!) to the extent that you would start to see patterns and notice that sort of thing, is the very essence of weight weenie-ism. It's funny. Or a Catch-22. Or whatever you want to call it. More than anything I just think it's interesting, in a social-psychological sort of way.

At the start I gently poked fun at my husband's Special Little Notebook, in which he meticulously scribbled down the weights of all components he considered, then eventually bought, for his vintage Italian build. But I soon came to realise just how interesting and informative his notes were.

For one thing, it really brought home what I already knew, but never quite saw such concrete evidence of: the fact that the weight, in a bicycle build, really does come from everywhere and not from any one area/ component. You save a few seemingly insignificant grams on each part, and when you add them all up the result is a significantly lighter bike. This is precisely why those whom we tease for being weight-weenies, pay attention to even small differences in weight when considering each component.

It was also interesting to notice that the components where weight tends to "hide" are often the ones overlooked by those with only a passing interest in weight savings, myself included. We tend to focus on the obvious suspects - the groupsets - neglecting to notice the weight of seatposts, handlebars, stems, and headsets. The weight differences between those parts, even within the same price range, might surprise you.

It is a thing often said of weight weenies, that they strive for weight savings at the cost of all else, sacrificing durability and sparing no expense. Interestingly though, the most lightweight parts are not always the costliest parts. And neither are they necessarily (judging by reviews and user feedback) the most fragile. We assume these things, because it makes sense to assume them, in a surface logic sort of way. But that does not make it true. It takes a weight weenie mentality to gather enough data to penetrate the assumptions and get to the crux of things.

If you have a good hour or two to spare and are prepared to be thoroughly fascinated, have a read through this post by a gentleman who built up a bicycle, complete with tiny lights and a saddle-wedge, under the UCI weight limit (so < 6.8kg/ 15lb) - without using any carbon parts. And cheaply!

Which brings me to another point about our culturally ingrained misinterpretation of weight weenie-ism. More often than not, those persons pre-occupied with this stuff don't do it because of some pathetic notion that the teeniest weight savings will make them perform like elite racers. No, my friends. They do it for the craic. They do it for the challenge. They do it for a hobby. They do it for to learn more about the history of the bicycle industry even, for it is certainly as good a starting point as any.

Am I a convert to the tribe? you might be starting to wonder, narrowing your eyes and brimming with suspicion. Oh, hardly. I lack the required rigour, the dilligence, the intense focus.

What I don't lack is, what in my view is a completely natural desire for my bicycles to be reasonably lightweight and not unnecessarily heavy - making them easier for my non-elite-racery 60kg self to propel along the road, to ascend hills upon, and to lift and carry should the situation call for it. And while that alone does not a weight weenie make, I also do appreciate those folks who are truly weight conscious. The ones who need to know the exact figures, who whip out their digital scales at the slightest provocation, who make spreadsheets and keep notebooks. For make no mistake: There are things we can learn from the fruits of their labours, information we can glean that may be more useful than we know.