On Use, Admiration, and Admitting to Wanting a Pretty Bike 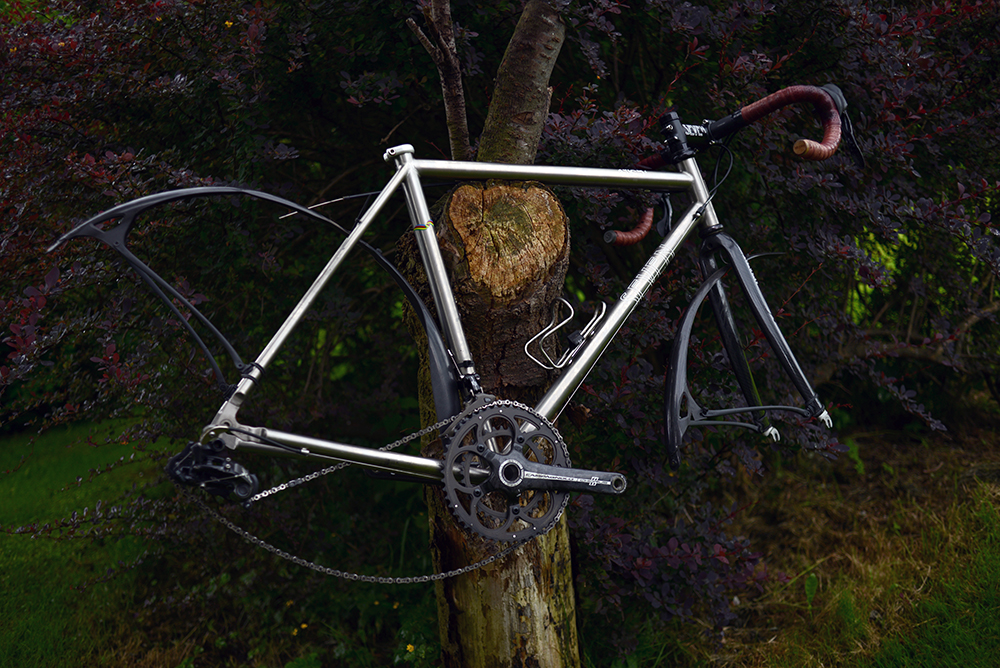 As you can see, I have been taking this weight-savings thing quite seriously - to the point that I've now removed all but the most essential parts from my roadbike. Can't you tell that my new wheels are practically light as air?

Okay, I tell a lie. But I am in the process of stripping my bike. As I'll soon be sending the frameset off to get painted. Note that I write painted, not re-painted. My roadbike's titanium frame is nekked as the day it was born, which is the way I wanted it when I ordered my bike over 4 years ago. Or so I thought.

"I still don't get why you didn't get your own bike sprayed," says my husband as he catches me, staring at his sparkly, gorgeous, green and blue paintjob, with mouth slack and eyes full of longing. Again.

"Oh, you know. It was unnecessary. My bike is titanium. They don't need paint, that's the whole point."

He is silent, but in a searching-for-the-right-words-while-suppressing-a-laugh sort of way. I can tell what he's thinking: "Since when has something being 'unnecessary' stopped you?!" Instead, he says diplomatically, "Oh come on. Get the thing painted. You like pretty bikes, it's okay!" 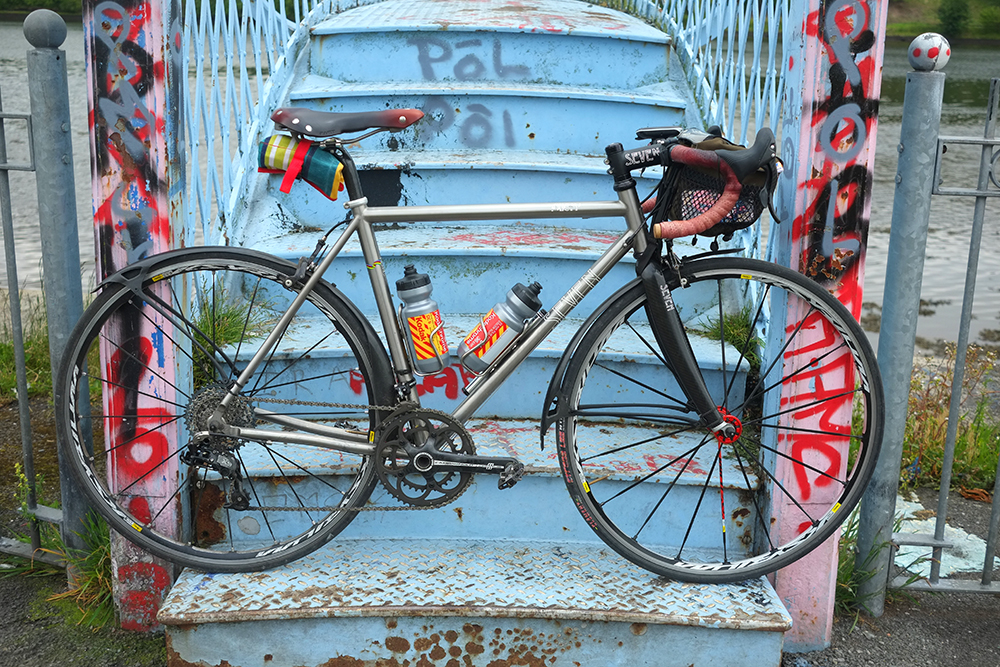 I do like pretty bikes; that much is obvious enough!  And people who know me find it a little strange that the one I ride most is not my idea of "pretty." Don't get me wrong: I admire the workmanship. And I appreciate the aesthetic. But that ain't the same thing as actually finding it beautiful. It's not gushy-squealy love.

But in a way, I think that gushy-squealy love was a thing I tried to avoid with my roadbike. Being enamoured of a bicycle's aesthetics had let me down in the past; it had proved counterproductive to finding something with the ride quality, performance, and degree of comfort that actually suited me. Thanks to a month-long rental in 2011, I already knew that a Seven would have the magic mix of those ingredients. And as I rode the bare, industrial-looking demo-bike in awe of its speed and comfort, an association between its look and feel formed and perhaps created a false dichotomy: "aesthetics vs function." So, when it came time to spec my own bike, following a twisted sort of logic, I worried perhaps that making it pretty would jinx the ride experience. Safer to keep it plain! 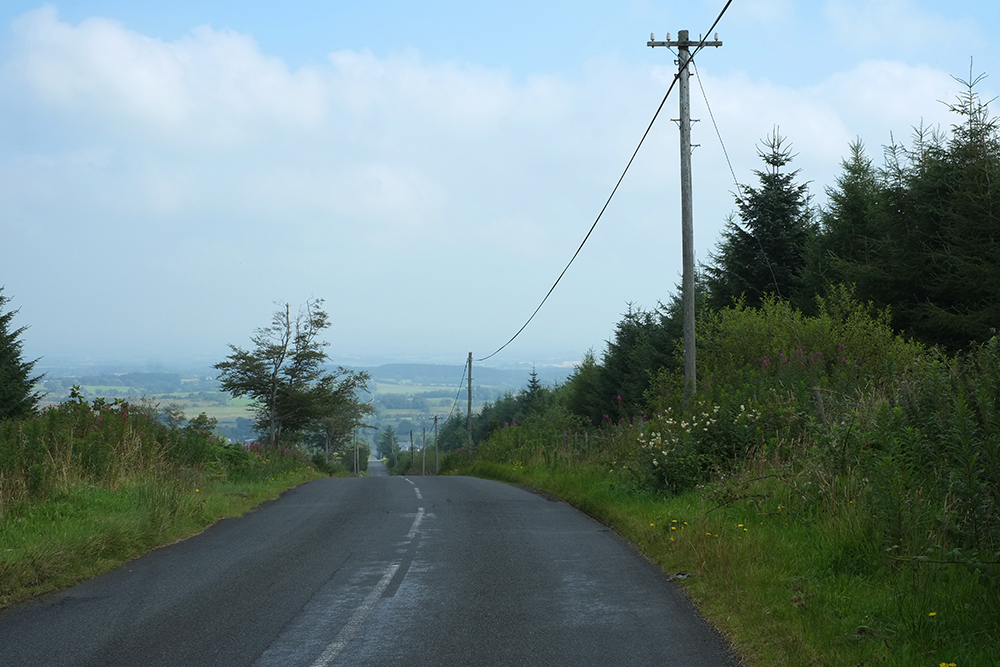 There are benefits to not being obsessed with a bicycle's looks. When I think of my roadbike, I do not picture the machine itself. It is as if the bike is invisible. What I picture are scenes like the one above. I picture the beautiful places it has taken me to, the magical experiences it has given me.

There are other things I've enjoyed about the plain and minimal matte-gray frame. For example, the fact that it matches everything. I could get any colour bartape I wanted, and it would look fantastic. The purple I chose (and have kept the entire time) was a wild infusion of colour that looked unexpected and chic, like a pair of brightly coloured shoes with an impeccable all-gray ensemble.

But am I an impeccable gray ensemble kind of girl? Not really. I am Edwardian florals. Paisley. Filigree. Clashing Donegal tweeds. All of it crumpled and wrinkled and worn till it's threadbare, of course.

There are cyclists I know - vintage enthusiasts, mainly, but also admirers of modern handmade bikes - who make a sharp distinction between the bicycles they love and the bicycles they ride in an everyday context. The latter is usually a machine toward which they feel no attachment and no affection. Similarly, among fountain pen enthusiasts there is a concept of "user pens" - that is, those pens deemed unremarkable enough for daily writing. I do not want to head in that direction. I want to use what I love, and to love what I use. 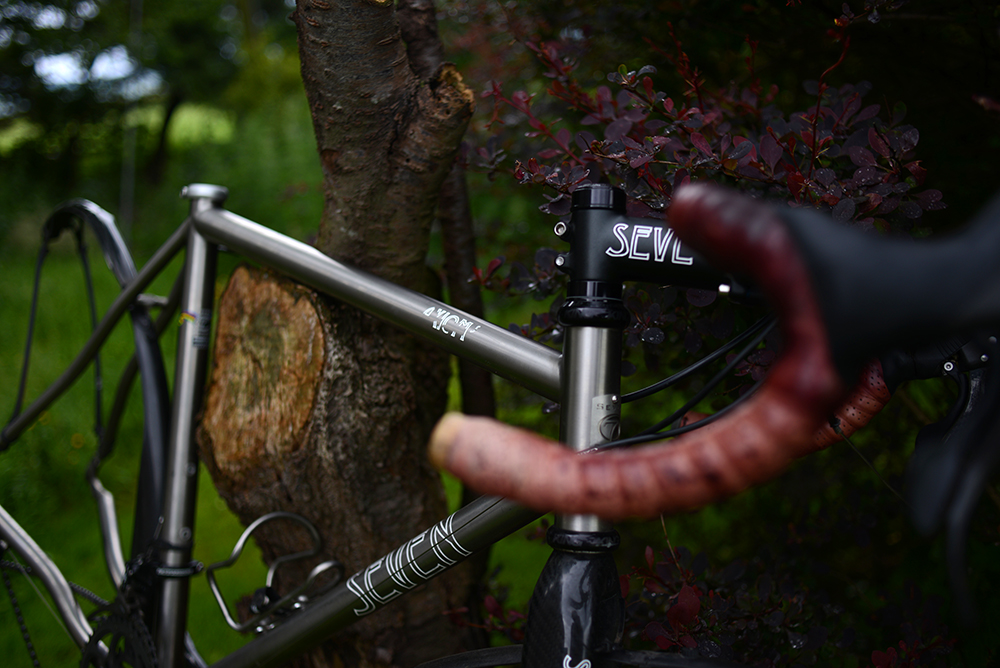 In our four and a half years together, my roadbike has given me some 20,000 miles of joy, comfort and general cycling pleasure. The fact that I did not fawn over its looks took my focus away from the bicycle as an object and directed it more keenly toward the cycling experience itself. At the time when I got the bike, I believe that I needed that. Now? I'd like to think that I am less confused about what I want. And more capable of a balanced approach.

In short, I'd like for my roadbike to be pretty and I am going to have it painted. Nothing crazy. Nothing overly fancy. No trendy themes that might make me cringe a few years down the road. But it'll be one of my favourite colours. It will have that candy-wrapper sheen that I love. And the rear triangle will be left bare titanium, because the way Seven's signature curved stays and the dropouts are done is my favourite part of the frame construction; I enjoy remembering watching them being welded.

Will the bicycle be any better once it is painted? Not at all (and just think of the extra weight!). But that really isn't the point. The relationship between use and admiration is an interesting one. And an ongoing one. And one that we must each figure out for ourselves. Me? I am still in the process. And I am enjoying the current stage of it very much.