Music in the Distance: Impressions of a Heavy Commute 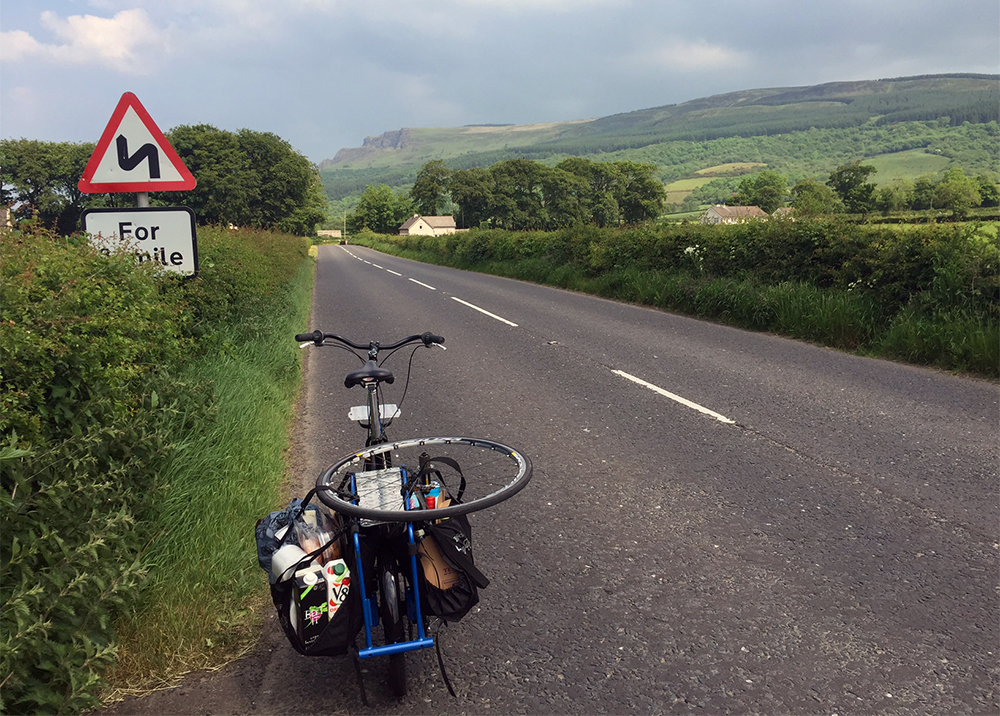 I have had a demo Bike Friday Haul-a-Day on loan for the past month and have used it quite a bit over that time. As explained in its introduction, my typical use case scenario for a cargo bike is not so much heavy loads as awkward ones: things such as ladders, tripods, pieces of furniture, large parts of bicycles, oversized canvases, hardware supplies. Carrying some of these things on the long-tail can look cool (the ladder was an especially big hit around the neighbourhood), but it's so easy and has so little impact on the cycling experience as to make it entirely unremarkable. Less visually impressive, but more physically noticeable is carrying a seemingly ordinary load that is actually heavy. Today I managed to accomplish that with a simple trip to the supermarket.

It was one of those days when we were suddenly out of everything, and particularly everything heavy - from laundry detergent and cleaning supplies, to potatoes and grains and various beverages. I think in fluids alone I must have bought 20kg worth of stuff. And then there was the week's worth of groceries. The cargo bags swallow all this so easily, that it really does not look like much. But by the time I emptied the contents of the shopping trolley, the bike was so heavy it was hard to roll up over curbs when navigating my way out of the car park.

Of course, as anyone who's tried a cargo bike knows, it is much easier to ride it loaded than to walk it loaded. So it was with some relief that I set off. I am not sure how much weight I had on the back of the bike exactly, but I am going to guesstimate close to 50kg. At just over half the Haul-a-Day's capacity, that's not even remotely impressive. Nevertheless it is more than what I'd normally carry. And on the 8 mile ride over rolling hills the difference was noticeable.

I did not feel it immediately. Starting and stopping on my way through the town - with its busy main road and myriad of roundabouts - the bike was totally cool with the weight: no hesitations, no wobbling at slow speeds. This made for confident handling in tight traffic. Once out of the town and on rural roads though, I immediately hit a series of hills and that's when the weight made itself known. On rollers where I've gotten used to making it most of the way up from the previous descent's momentum, the bike would run out of steam much sooner than it had with lighter loads, necessitating an immediate switch into low gears pretty much at any hint of an incline. This was fine, as there were plenty of low gears available. It just made the rollers slower-going than usual.

On longer drags at steeper gradients (I have a nice 14% climb as part of my commuter fun), I was also able to - for the first time since riding the Haul-a-Day - feel the weighted long tail "wag" (flex?) behind me and, at the same time, the front end of the bike start to "wander" (lift?) a bit, in a way that was unsettling at first. But after a few seconds I got used to the sensation. I was still in full control of the bike and was not even close to running out of gears to push it up the incline, and being aware of this soon calmed me. The handling and feel of the bike were just different - which, carrying all that weight uphill, perhaps should not have come as a great surprise!

Once the road flattened out, the trip became blissfully normal again. On flats, with the bike going at speed, I could not feel the weight of the long tail at all. I was also using the same gearing as I normally would.

However, before long, I began to notice a strange and entirely novel thing. It was not a sensation of weight, but... what was it, a sound? Yes, a sound. Like chimes, or a soft sort of harpsichord chamber music. I could not tell where it was coming from. It seemed to be floating in from the distance at first, drifting toward me in waves - now muted, now louder. Then suddenly it seemed to surround me. The day was hot and I had spent the morning in direct sunlight, pushing a heavy bike uphill. Could this be a symptom of heat stroke? As if to encourage that notion, the music picked up, humming and chiming hauntingly as the mountain view ahead glazed over with humid milkiness.

Pulling over onto a gravel shoulder, I stopped the bike to wipe my forehead and get a drink of water. A warm breeze blew as I walked around the rear of the long-tail. And bending down over the cargo, I saw, with amazement, where the strange music was coming from.

I had bought six glass bottles of mineral water. As they stood together, snugly, in a wine box, the breeze circled around them, making a magical chiming sound. The breeze also blew through the flat bladed spokes of the wheel I had tied to the top of the cargo rack (I had stopped by the bike shop to get the cassette removed, as I don't have the right tool), making a sound that was not unlike a harpsichord. The two separate noises harmonised together exquisitely, forming such a distinct melody it was difficult to believe the music was accidental. By the side of the road, with the Queen Anne's Lace swaying around me, the effect was uncanny. The bike was making music to lighten our heavy commute.