In the Dark on Women's Bike Fit? Why a Gendered Approach Falls Short 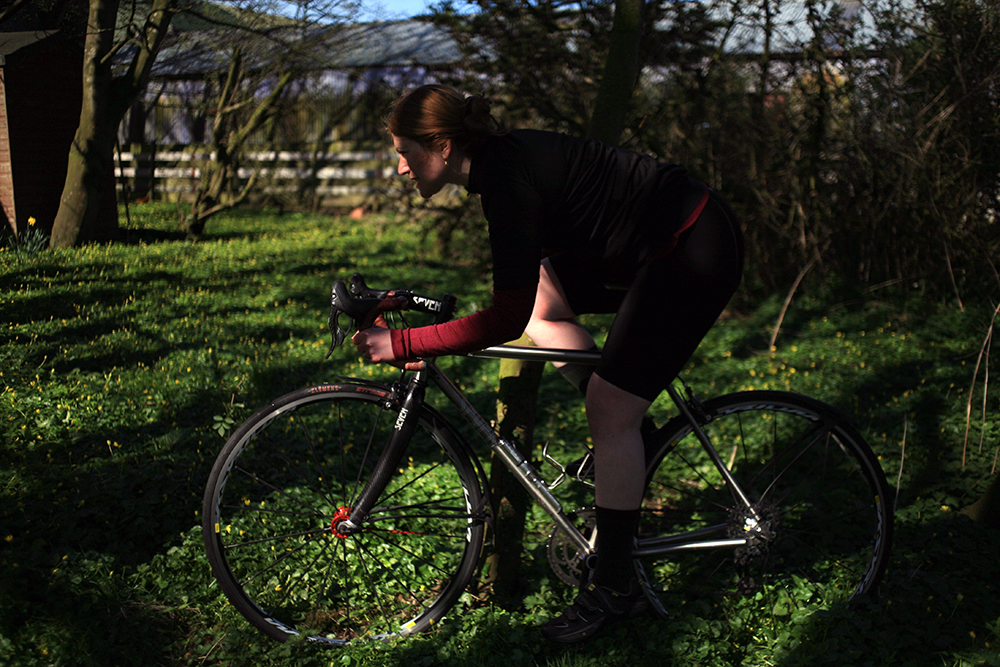 It seems like every now and again discussions flare up on the importance of proper (road)bike fit for women, and on the industry’s failure to cater to female customers in this regard. Speaking very broadly, these discussions tend to polarise around one of two points of view:

A. that female-specific body proportions warrant a distinct approach to bike fit, and that not enough off-the-shelf bicycles are produced with it in mind.

B. that female-specific proportions are a myth. What women need is greater variety in smaller frame sizes, and industry staff that don't talk down to them.

As last week's article in Total Women's Cycling hints at, there is also an inherent bias built into these discussions, depending on who is speaking: Mainstream bicycle manufacturers are motivated to convince women they can fit just fine on the off-the-shelf bicycles already being produced. Custom fitters are motivated to cultivate the idea of problems in this regard, to which they can offer solutions.

So, who are we to believe? Whenever I am asked this question, all I can say is "we can only believe our own bodies!" For no matter what a manufacturer - or a bike fitter - tells us, we must ultimately go with what actually feels right and comfortable. But as far as a more general opinion, my own take on it is this:

While I believe that female-specific proportions are indeed real and not "a myth," I am not convinced that a gendered approach to bike fit is useful.

Let's start with gender differences in human anatomy. Throughout my former career in psychology and neuroscience, I was involved in quite a bit of research relating to this subject, albeit indirectly. And based on everything I know on the topic, there is no question in my mind that there are differences in men's and women's body proportions. Listing only the ones most relevant to bicycle fit, these include:

Now, notice the words I used above. On average. Tend to. All else remaining equal. This is statistical speak about generalised differences in populations. It is a language that deals in hypotheticals, averages, probabilities.

If pressed to translate this into a practical, real-life scenario you could picture, the best I can do would be this: If we were to pick a man and a woman at random from a participant pool where factors such as ethnic background and various developmental factors (including diet and levels of physical activity from birth to present time) were kept as homogenous as possible, and if the pair of them were the same height and weight, chances are the woman would have longer legs, shorter arms, smaller hands, less muscle mass than the man, and that her centre of gravity would be hip-level, whereas his would be chest-level. And notice I am still using words like "chances are." No matter what the statistics say, and no matter how well we control for "all other factors," any given individual's proportions are a wildcard.

For this reason alone, the fact that anatomical differences between men and women exist at a statistical level does not translate into: "women have longer legs and shorter torsos than men; therefore they need bikes with shorter top tubes and higher head tubes." In an ethnically and developmentally diverse society especially, it is difficult to predict what sort of fit the proportions of any individual man or woman will require. The woman-specific philosophy of roadbike fit is well-intentioned. However, when applied in practice, it is just as likely to alienate women for not fitting some hypothetical stereotyped mold, as to offer solutions.

But I am going to go a step further still and suggest that even for a woman with stereotypically female proportions, the so-called woman-specific roadbike fit is not necessarily suitable. Take me as an example. Although I am under 5'7" in height, my legs are so long in proportion to the rest of my body, that when I stand beside my 5'11" husband our pelvic regions nearly line up.

And yet, I can fit just fine on unisex off-the-shelf roadbikes with top tubes in the 52-54cm range, with the help of 9-11cm stems and adjustable saddle setback. Women-specific designs, on the other hand, tend to feel far too upright and poorly balanced for me. I also find the idea of shrinking the top tube on what is already a small frame size, without also going down in wheel size, an inherently problematic approach: It either introduces dramatic amounts of toe overlap, or requires excessive slackening of both headtube and fork rake (assuming the manufacturer wants to keep the front end geometry constant, compared to other frame sizes).

Now, some bicycle industry folks have told me (without ever having seen me ride, I might add- just by looking at my bike!) that my roadbike position looks "aggressive for a woman," and suggested I might be more comfortable with a more upright fit. I assure them, however, that comfort-seeking was exactly how I arrived at my current position, which has been bliss for the past 4 years.

Then again, one fitter I've encountered had a different perspective. "I can see why you like to be forward and low on the bike," he said, looking me up and down with clinical interest. "You are bottom-heavy, but don't have the chest to balance that out like some women; you are trying to counteract the forces pulling you back." Well, whatever words he actually used were much more tactful than these, but I am paraphrasing the gist of it. And the personal theory on bike fit he then launched into was actually quite interesting, resonating with my own experiences more so than any other I'd heard to date. His idea was that we could make no assumptions about a person's fit - male or female - until we see how they move, sit, and balance their weight - things determined not only by their gender and body-mass distribution, but also by posture, spine curvature, and a myriad of other factors that do not come into light until we see the cyclist in action.

Which brings me to my main point in all this: When it comes to human roadbike fit - men's or women's - there is still so much we do not understand. So many factors unaccounted for. More than anything, further research is needed - and that research needs to be less simplistic, more nuanced, and not so rigidly centered on gender.

And then, once some common fit issues are identified and ways to address them developed, perhaps new categories of fit might emerge - with versatile and non-gendered terms used to describe them? That way, if a woman or a man requires a bicycle with, say, short reach, they can walk into a shop and request to see a short-reach model. Without it necessarily being labeled as a gender-specific model, painted fuchsia, or equipped with lower-end components.

On a final note, I would like to offer some food for thought when it comes to men's roadbike fit. In nearly all the articles on women's fit I read, there seems to be an assumption that the overwhelming majority of male cyclists fit standard off-the-shelf roadbikes just fine. However, the anecdotal evidence I continually gather contradicts this. It is possible that men too experience frequent problems with fit, but - due to gender stereotypes and expectations still at play in society - perhaps feel unable to articulate their discomfort, for fear of being perceived as weak, fussy, or overly delicate (after all - sport is about pain, real men are supposed to be able to take it! et cetera). Once again, I believe it is helpful to think of bike fit as an individual and a pan-human issue, not a gendered one. Whether we are old or young, able bodied or injured, female or male, experienced or beginners, everyone will benefit from feeling comfortable on their bicycle. It is not useful to make assumptions on what a person's position on the bike ought to be, based on their gender alone.