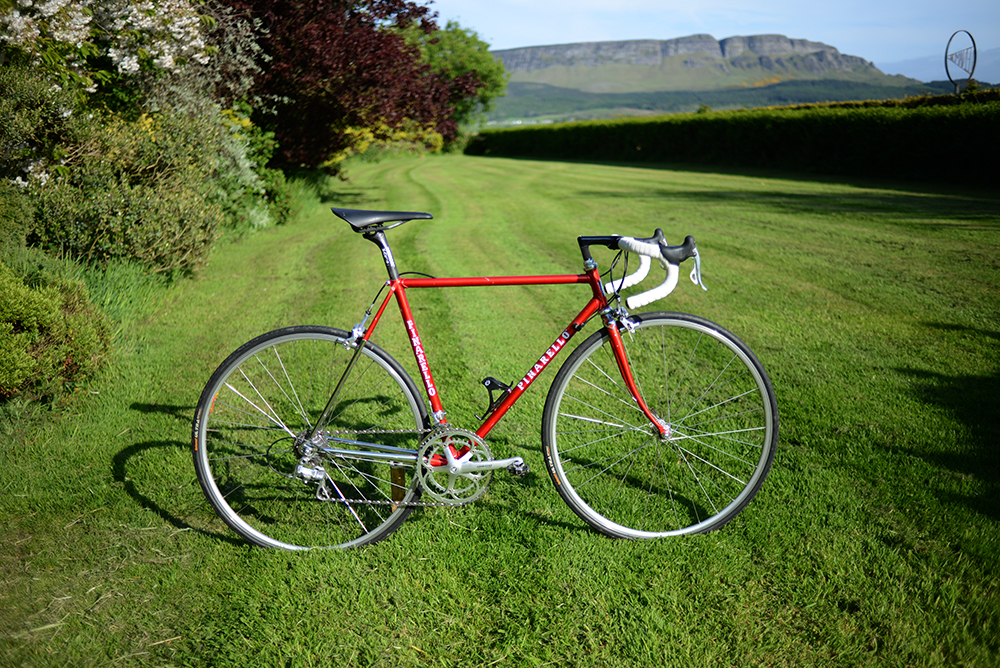 You know that scene from Pulp Fiction? Well my reaction was very much like that. Except, well, without the cocaine. But then who needs cocaine, anyway, when there are bicycles? Glorious, lovely bicycles in their endless iterations, ever-ready to give us a thrilling contact high?

He wheeled out the candy-red, chrome-tipped, white-accented, vintage-modern-sparkly concoction into the flickering mid-afternoon sunlight and what else could I say, but god damn? 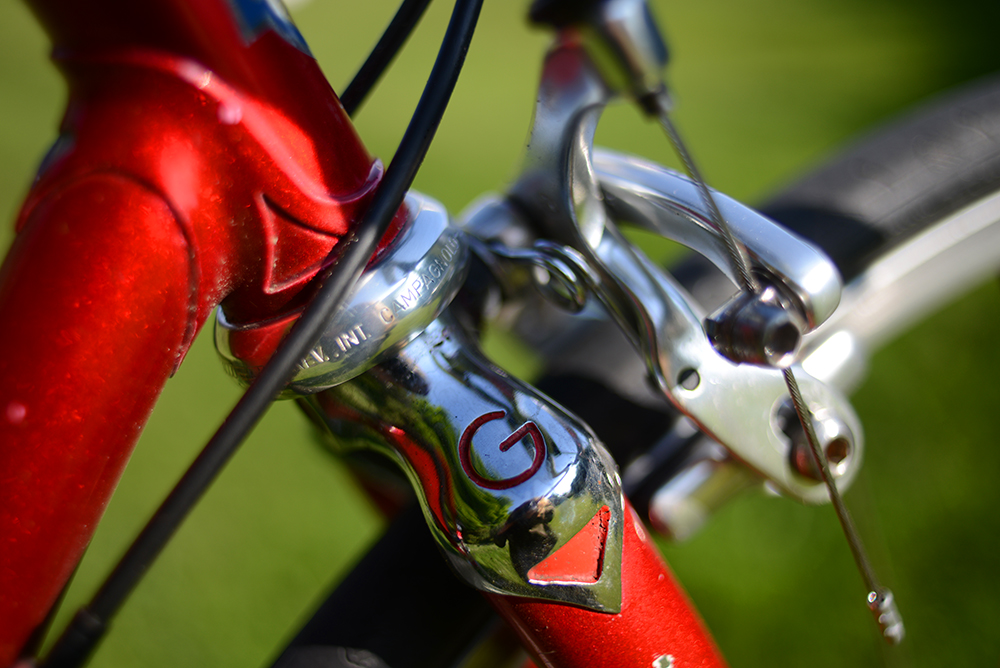 After that, we joked that this was the bicycle’s name. Could that be what the mysterious G stamped into its fork crown and stay caps stood for?

I had also taken to calling the bicycle ol’ G.  For it was certainly a bit Gangster. As well as somewhat of a Geezer (in a good way, of course).

It so happens that G is also its new owner's initial - Gary. It was this that first drew his attention to this frame, with its Pinarello decals but an otherwise suspicious lack of identifiers. 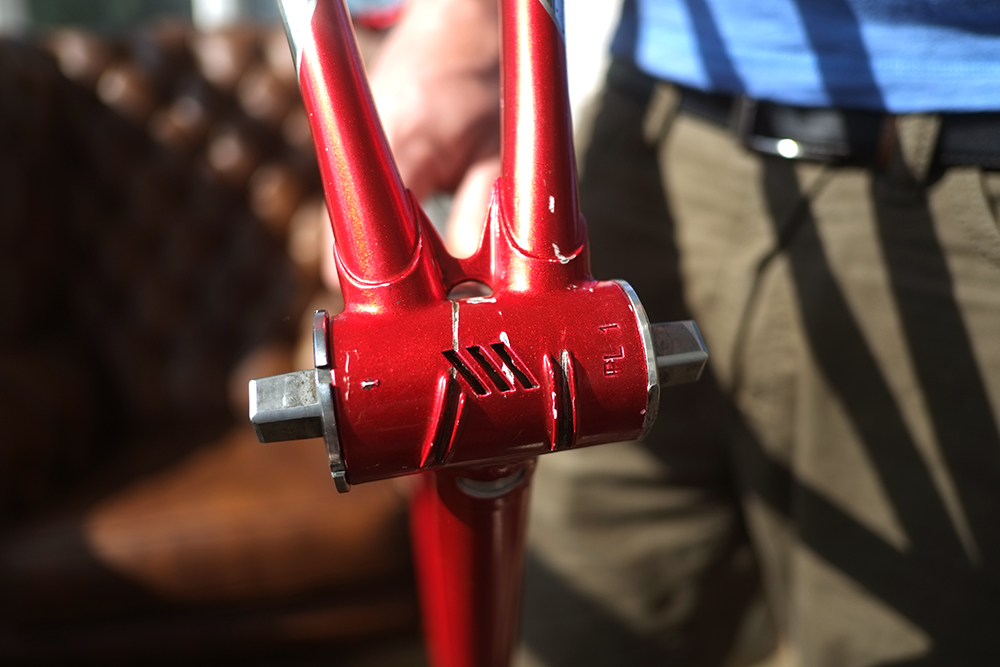 On receipt, these suspicions were confirmed. A Pinarello this frameset is not. But it is: Italian, handbuilt, elegantly finished, and made - judging by the stamped birdies and the weight of the frame and fork - of Columbus SL tubing. Not bad. 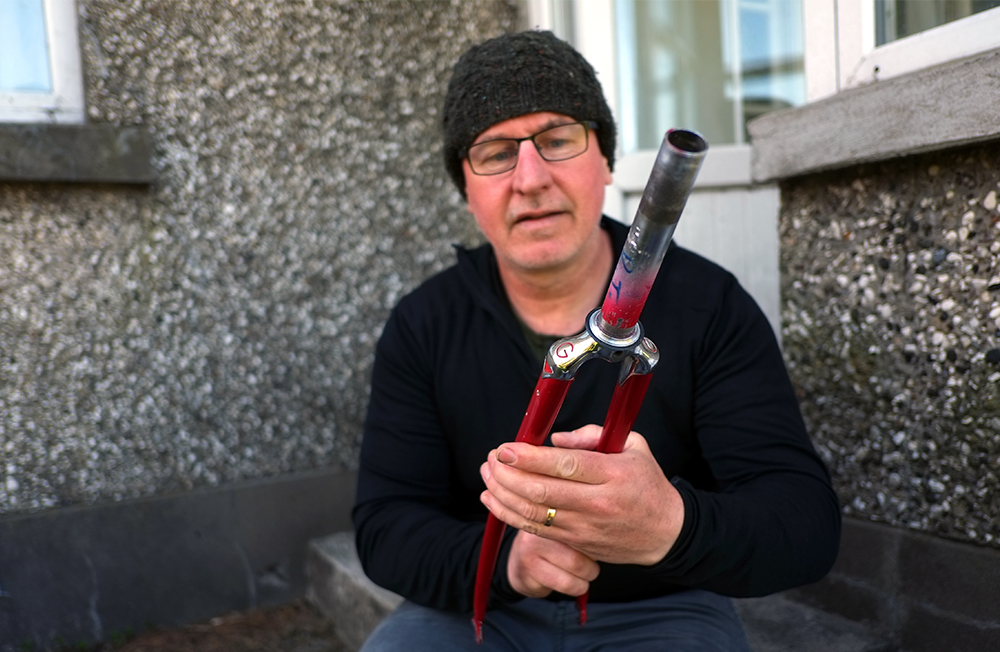 I had delayed writing this post in hopes that we would know more about the frame's identity by now. But alas, research has proven fruitless so far. None of my connections have heard of an Italian builder who'd stamped "G" into their frames in this exact manner. And I can find no other example of identical markings online. And while, in theory, G could have also been the customer's initial,  the "R.T." written on the steerer in blue would seem to contradict that.

In any case, a plausible, I think, scenario is that the frame was a one-off, made (perhaps on the side?) for a friend of the builder. But just who these G. and R.T. were we might never know. 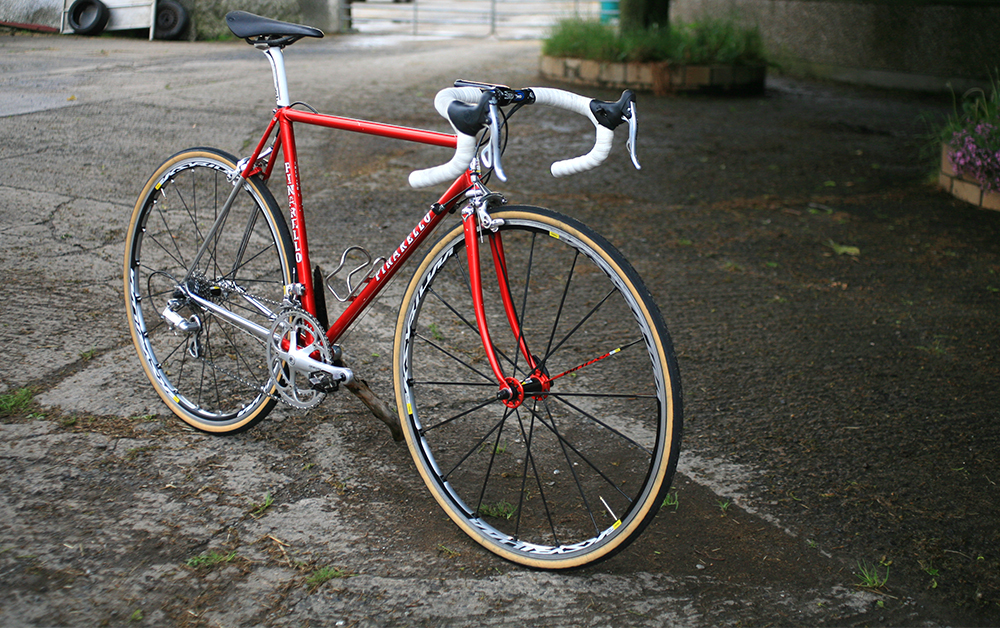 What we do know is what is what's in front of us. Which is: classic Italian geometry (low bottom bracket, "long and low" proportions, short chainstays, high trail), lugwork indicating mid-80s vintage,  beautiful paint, and some aftermarket Pinarello decals.

Whether it does more justice to the bike to remove the decals, or whether keeping them preserves its history, is something that is still being debated. But for now they stay. 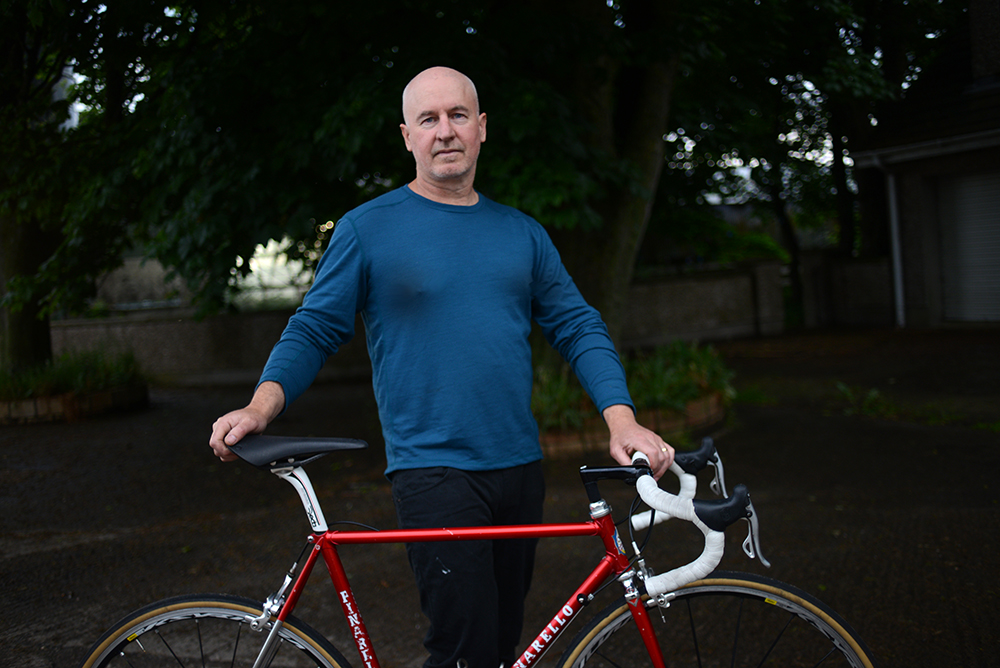 As I mentioned in the previous post, this is my husband's fledgling attempt at a bicycle build. One day he decided he wanted a vintage steel Italian racing frame. And he wanted to build it up with components himself.

What followed were several feverish weeks during which he went from having only a very basic knowledge of bicycle fit, assembly, frame/component compatibility, and so forth, to that knowledge becoming encyclopedic. All I could do was sit back and observe in awe, answering the occasional question, as he read countless articles and hunted for bargain parts on ebay. 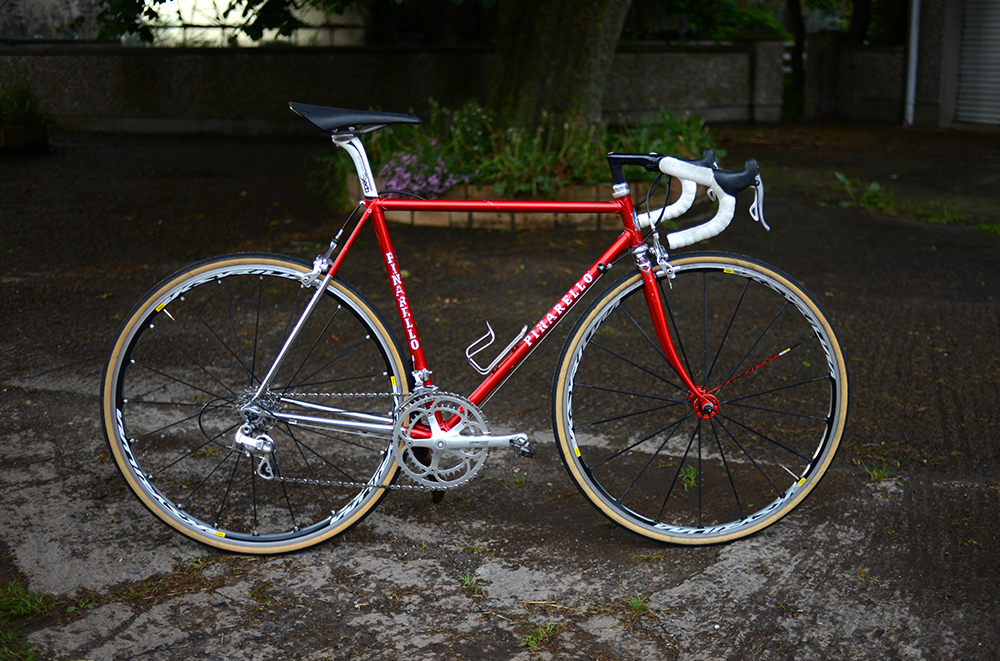 Finally, this here is the result. He's been riding the bicycle for a month now and has even changed a few parts already (the wheels, tyres, seatpost and bottle cage - if you compare to the first photo). But he reckons at this point it is finished.

The complete bike weighs in at just over 19lb. And, with a 520 x 540mm frame, it is set up to fit him exactly like his modern Honey road bike, to the millimeter. In that sense, he decided to go with a modern road-race fit when choosing the frame size. And also (in case it isn't obvious!) with modern components. He did consider doing it up with period-correct stuff at first, but ultimately decided not to. He reasoning here was that, fitting a vintage racing frame with today's technology is a sign of respect - a way of recognising that the frame was not made to look pretty or quaint, but to perform, and giving it a chance to perform with the latest technological advantages. 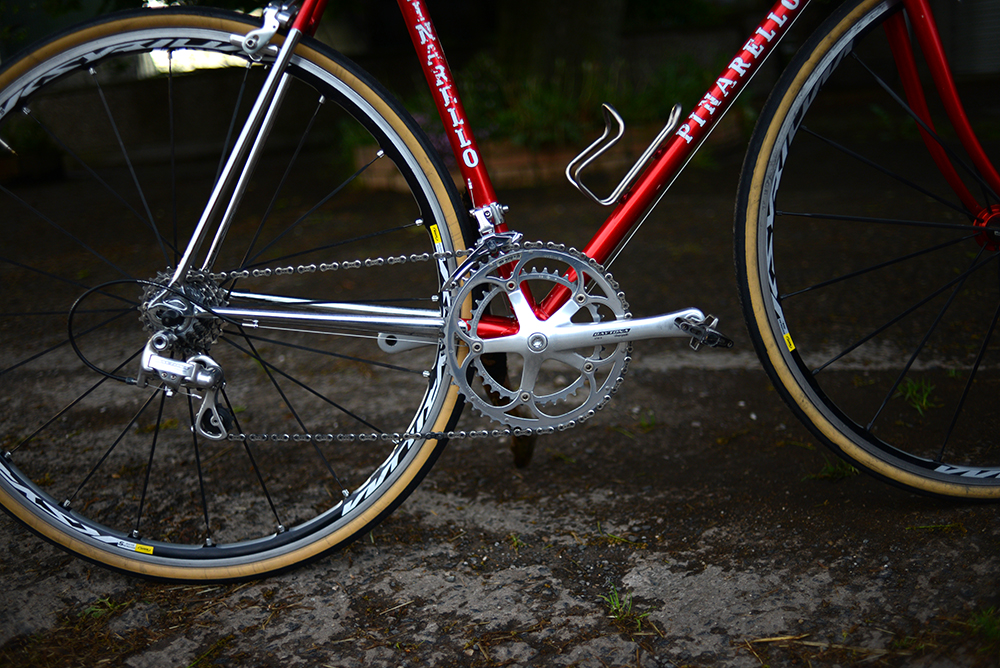 Of course the 13 year old Campagnolo Daytona group is not, strictly speaking "the latest." But he didn't want to spend too much on an experimental build. And in any case it is certainly a decent enough group (Daytona is the old name for Centaur) which he snagged for a song in excellent condition - supplemented by a Record bottom bracket, headset and front derailleur, at that.

A funny aspect of this drivetrain, though, is its massive gearing: This bike is a 53/39t in the front, 13-26t in the rear, whereas his modern roadbike is a 50/34t front, 12-32t rear. Quite a difference, and switching back and forth between them has quickly expanded his climbing technique repertoire. 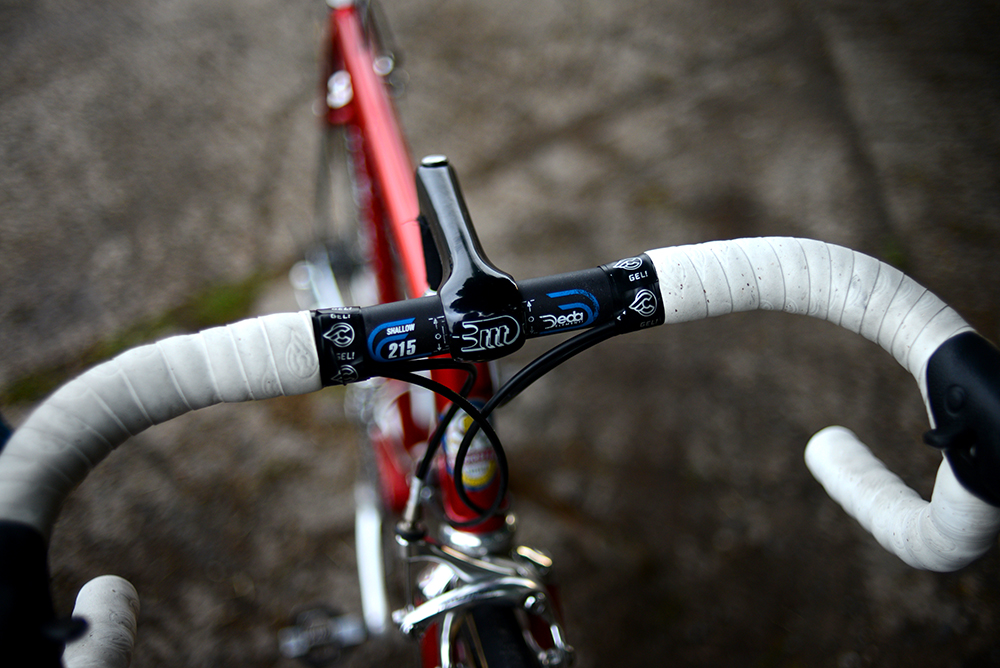 The stem is a very elegant looking older 3TTT, 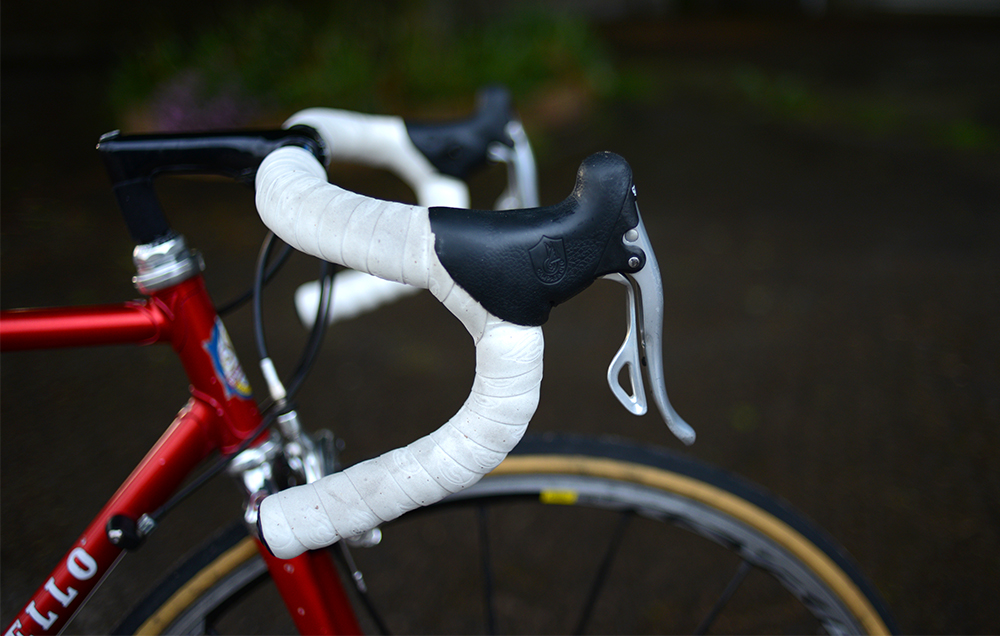 and the handlebars modern Deda Shallow Drop 215, which have considerably down-sloping shoulders. 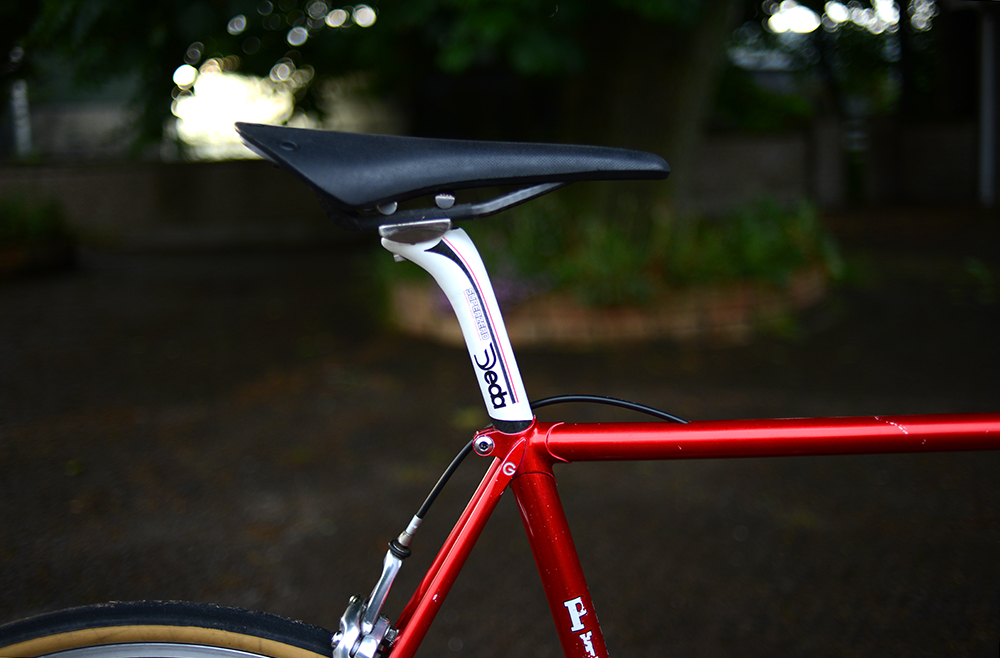 The seatpost is a Deda subzero in black and white, which matches the stem and handlebar setup nicely. 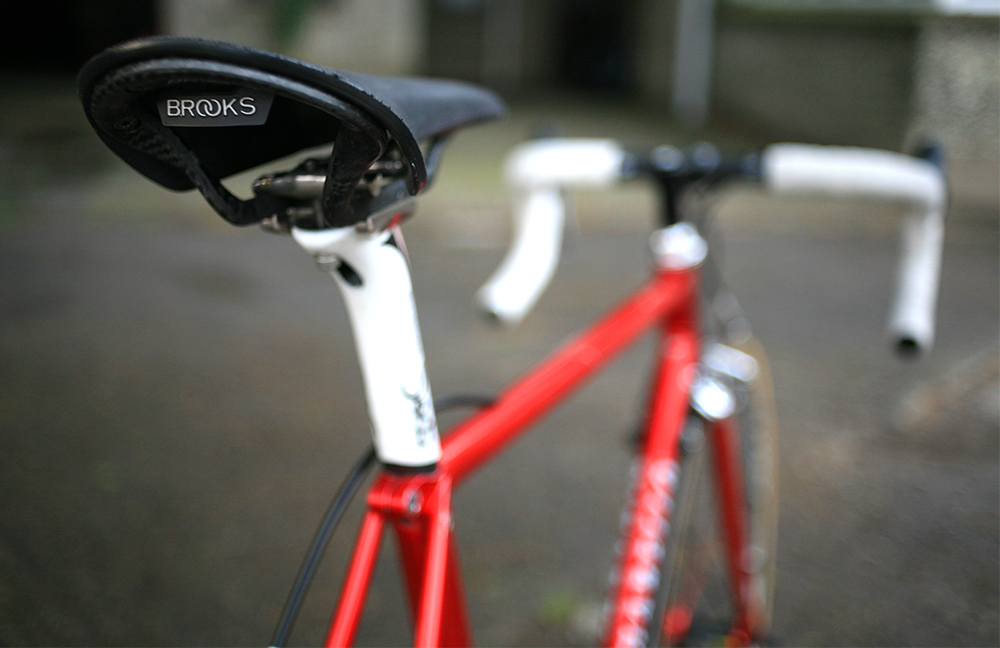 And the saddle is a carbon Brooks Cambium C13, which is a topic for another time! 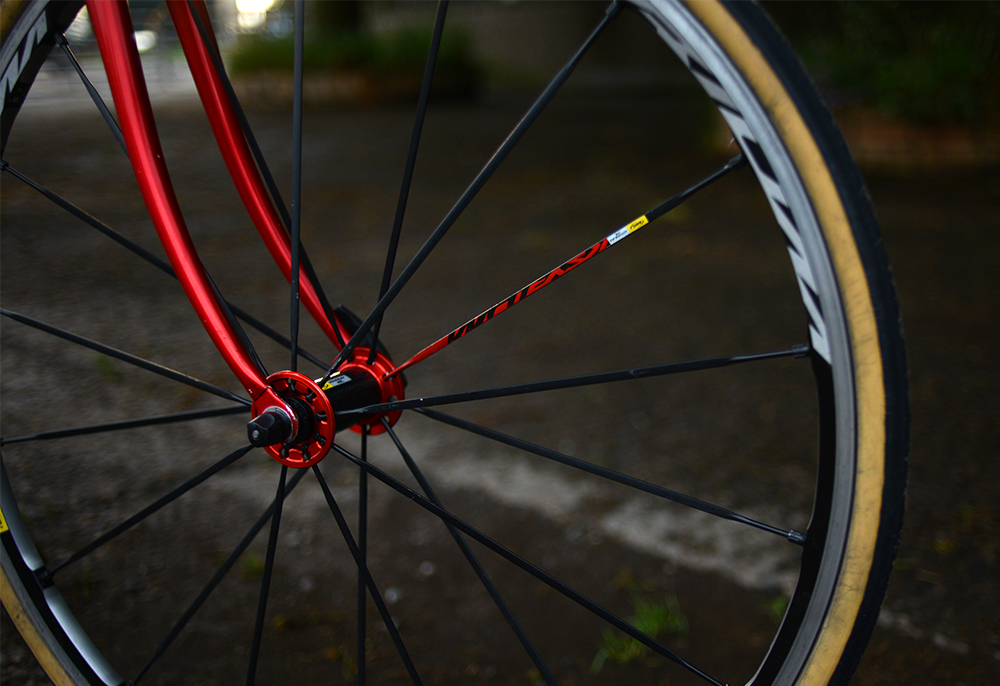 Finally, after first riding on some older Mavic Open Pros, he swapped over to the 4-year old Ksyriums from my Seven - my one contribution to this build (my own bike is getting a little make-over, as the crosswinds have driven me to abandon flat-bladed spokes).

It's funny how the red hub and spoke of the Ksyrium wheel match the red paint of the fork almost exactly, and personally I think it's a little too matchy. But he likes it, and that's the important thing.

With the exception of the French wheels and American pedals, everything on the bike is Italian - right down to the Brooks (made in Italy) saddle. 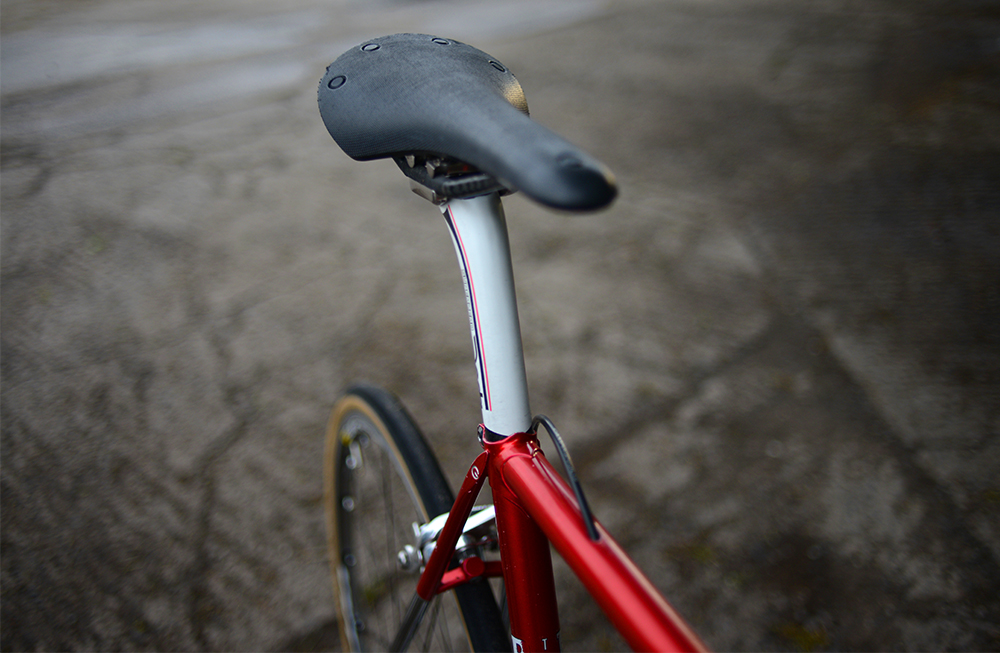 Overall, while red bikes are not really my thing (But how can they not be? They're faster!), I like everything about his build in the sense that I think it suits the owner very well. It is punchy and aggressive, yet elegant. And I like it that the - granted, rather unorthodox - modern component medley looks purpose-driven, yet still aesthetically pleasing in its own way. 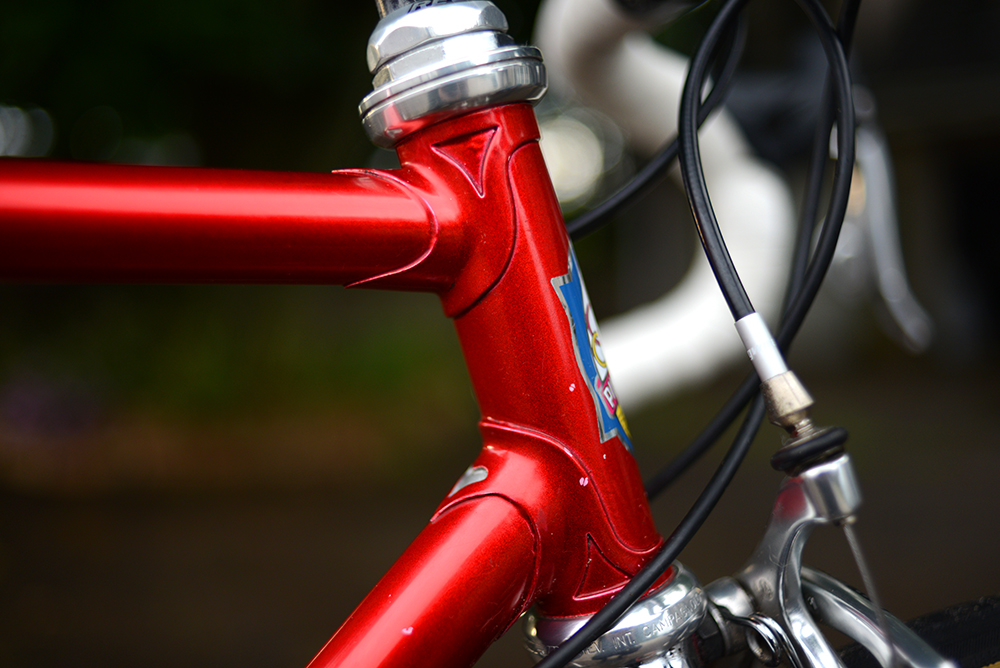 And did I mention the lugs and the paint? What is it about paint from this vintage that makes it look so peculiarly delicious? {Edited to add: In fact it is translucent paint over a metallic basecoat, as explained here.} The resulting sheen is of a deeper, glassier quality than anything contemporary I've seen, and Gary is enamoured of it.  It is why he would not want to respray this frame, despite its few nicks here and there. But removing the Pinarello decals (which are not clear-coated over, so it would be simple enough) is another matter, and that's still under consideration.

One idea I suggested is to make his own decals; just make up a new identity entirely for the bike. If the bicycle has no past, perhaps it needs a future. 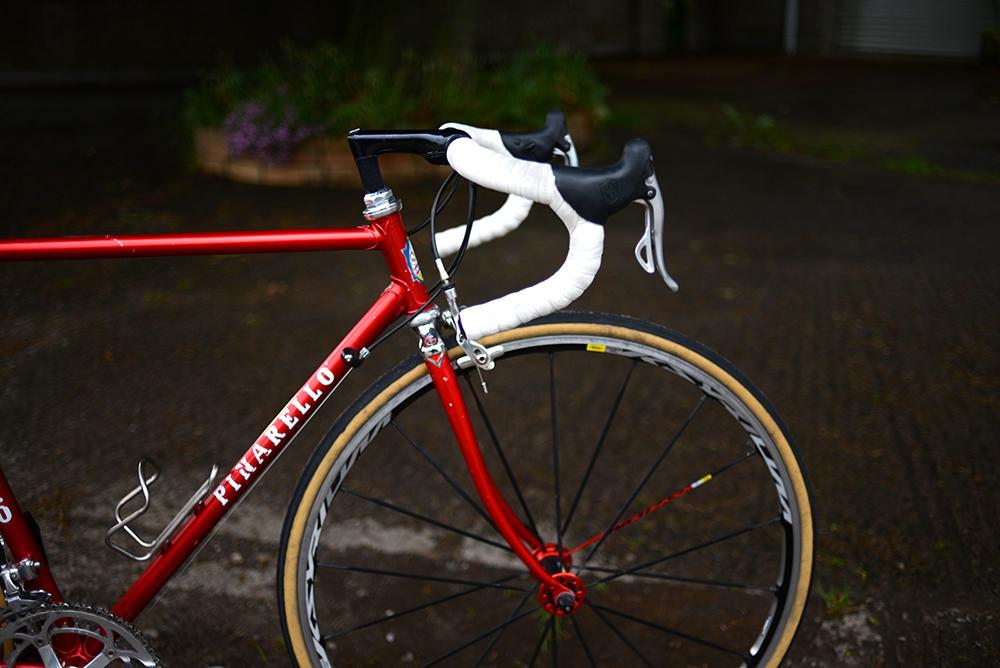 And the future, it seems, is already in the making. As I've mentioned, he has been riding this bike for a month and has made lots of interesting observations that have sparked off countless discussions between us on the virtues of different types of tubing, geometries, wheels, tyres, gearing and so on.

One thing that particularly took me aback, is that while riding this bike he independently discovered "planing" -  noting one day that, while not as stiff as his modern Honey, the flex of this frame seems to work with his pedal strokes when he puts in effort or pushes on climbs. He had previously assumed that the stiffer a bicycle was, the better (performance-wise), but now sees it as a more complicated matter.

Comfort-wise, he loves the bicycle's ride feel. And as far as speed - well, he wouldn't take it on a fast club ride instead of his Honey, unless deliberately looking to make things harder on himself. But when he rides with me, it subtly acts as an equaliser, is the way I would put it (so in that sense alone I am glad he has this bike!). 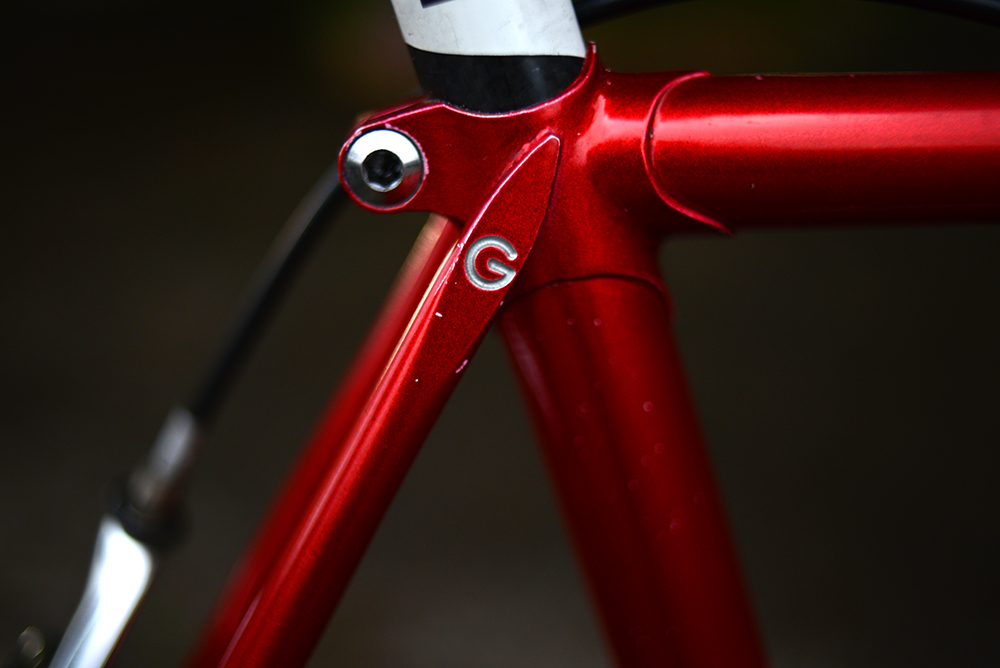 In describing Gary's return to cycling and initial search for a new bike last year, I had mentioned he went from wanting a carbon frame from a mainstream manufacturer to, in the end, choosing to go with modern lightweight steel from a niche maker. And while I am not entirely blameless there, I honestly never expected for things to go quite this far in the "steel is real" direction. That he grew interested in vintage bikes with such passion and intensity came as a great surprise.

Now here stands the result of all that: The Ol' G.

Mysterious. Italian. Smooth. And dapper as heck, with a new lease on life. True, we don't know what the G stands for. But today I say it stands for "Good job on your first build." And of course - I mean, jeez, just look at it  - G is for Goddamn!