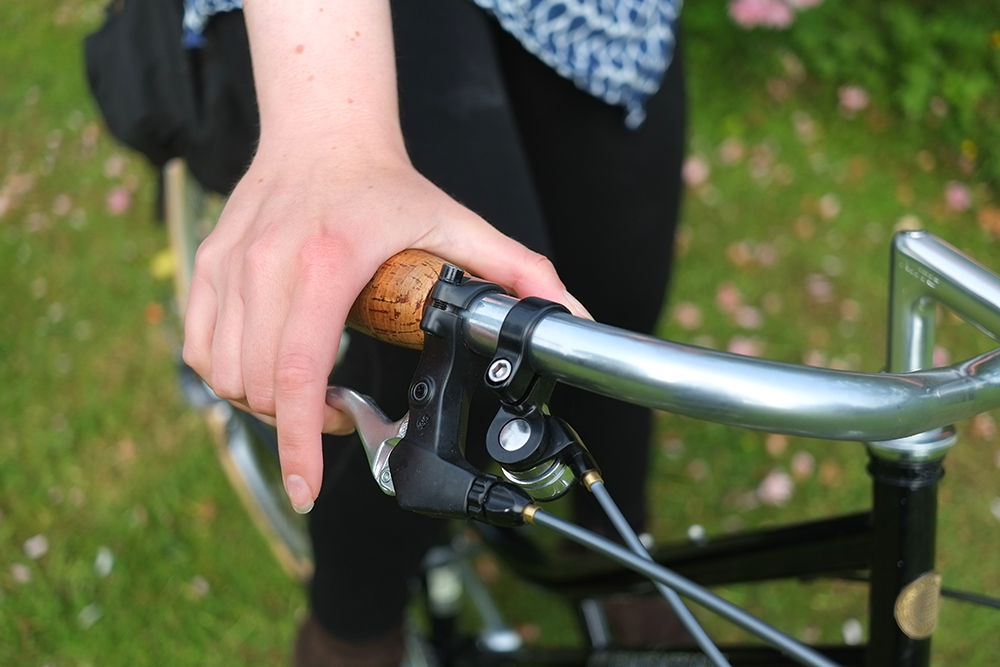 It was not till I unpacked the demo Clementine, that I realised I had never seen a full-on Rivendell bicycle before. I mean, of course I have seen Rivendells. I have even owned one myself, and have ridden half a dozen others besides, maybe more. But none of those had been in-house builds. They had been built up with components from the frame up either at Harris Cyclery in Boston, or by the bicycles' owners. So I never realised till now that Rivendell has their own distinct way of putting the bikes together, with a few somewhat quirky (who would have guessed!) signature touches. 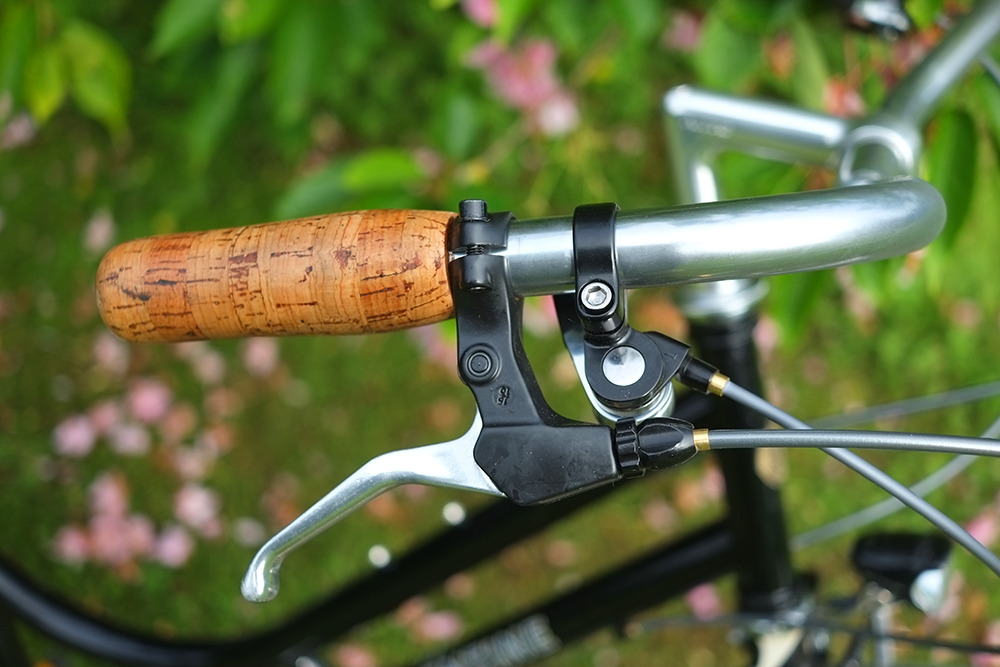 One of these I discovered in a somewhat comical manner, when I finished putting together the mostly-assembled bike (basically just installed the front wheel, mudguard and handlebars) to find that the brake levers and shifters sat the wrong way around. At first I though I had managed to somehow rotate the handlebars incorrectly while installing them, because surely the experienced assembler at Riv couldn’t have made such a mistake. So I sat there, trying to figure it out, feeling like an idiot. But no, there was no way to rotate the bars that would fix this. The brake lever and thumb shifter labeled “L” were on the right handlebar, and the ones labeled “R” were on the left handlebar. As a result, the parts had the look of being upside down: with the brand names hidden on the underside, and the bolts pointing up. I would have to remove the shellacked cork grips, probably cracking them in the process, and redo the whole setup.

Disappointed, and at the same time eager to try the bike, I decided to leave this unpleasant task till the next day and in the meanwhile take the Clementine for a spin as it was. So I attached the saddle and pedals, adjusted the fit, plopped my hands on the bars, and - damn! The placement of the levers and shifters felt remarkably comfortable. I made some little tweaks, moving the thumbies closer to the grips and rotating the brake levers slightly. After that, the setup just felt so much perfecter than any other arrangement I’ve tried on sweptback bars, that I began to wonder - nah, could it be? - whether they’d done it this way deliberately.

So I went on Rivendell's website and looked for closeup shots showing the “cockpit” setups of their complete builds. And sure enough, the upright bikes had the brake levers and thumbies installed upside down! Finally, just to make sure, I sheepishly emailed them to confirm - and received this reply:


The reverse thumbie thing is a quirk of these bikes. We thought they worked better that way ergonomically and the levers get flipped too for a slimmer fit. Having upside down thumbies also allows you to use the handlebar curves for climbing.

Duh! How could I not have known they did this? And to think, that all of this time I have been missing out on what I can only describe as the ultimate 'brifters' setup for sweptback handlebars. 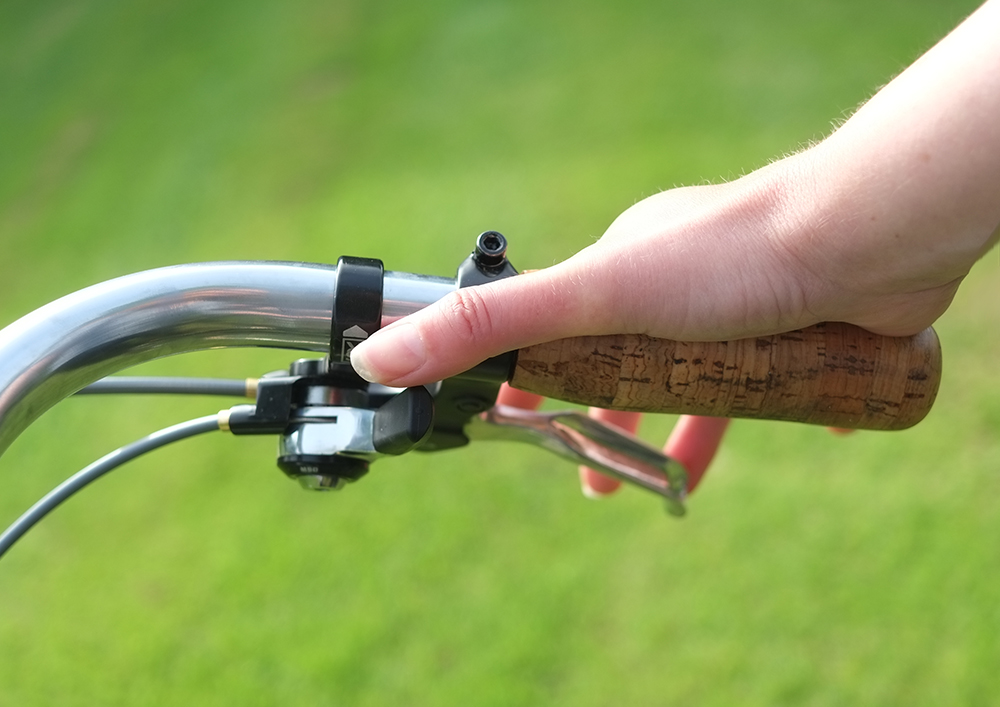 I am not joking or making fun when I write this. If you are seeking an experience similar to the integrated brake/shift levers that you can get on drop bars with the mainstream roadie component groups, this is the closest to that I have tried on upright bars (and before anyone else asks in the comments - yes, I have tried the Shimano MTB trigger shifter - this is far nicer!). But I am not just talking about using thumbies and city levers. The reversed/ upside down installation is key here. When installed in this manner, the reach to the brake lever shortens and the shifter is placed literally under your thumb. Both can be activated (at the same time if you like) without moving your hands from their positions on the grips and without straining your fingers or twisting your wrists uncomfortably. For those accustomed to Campagnolo ergo levers especially (where you use the thumb as well as the forefinger), this system will feel particularly natural. If you live in a hilly area like me where you want to be able to shift gears easily and quickly, having such a smooth and easy to use setup really is bliss.

So, I am thankful to the Rivendell folks for introducing me to this genius bit of eccentricity. But needless to say, you do not need a Rivendell bicycle to set up your handlebars in this manner. Any bike can be outfitted with plain grips, and reversed city levers and thumbies - in fact it's probably one of the cheaper handlebar setups available. All the better that it's so functional and comfy.

And the bolts pointing up? Well, you know you can always twine them...