What Have I Done? 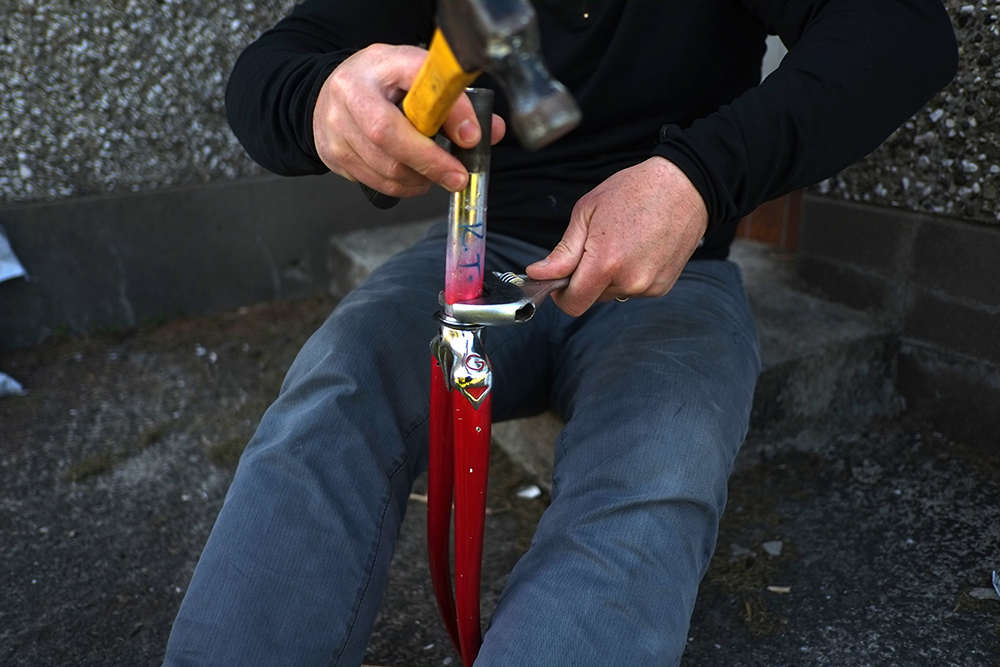 I am not sure how to describe what has happened. It progressed so quickly you see. And it came rather out of the blue.

After nearly 3 years you might think that you more or less know someone. And I (thought that I) knew my husband to have a healthily moderate interest in bicycles. He would join me on rides. He would chat to me about bicycle construction and history. But there was a limit to his attention and commitment to the topic. He wasn’t “bicycle-mad,” as they call my type here. And that, I thought, was probably a good thing.

Then a few months back I drag home an old Raleigh Rapide, which I’d spotted in town and thought he might like for an everyday errand type bike.

To my relief, he does like it. He likes it a lot. In fact, the more he rides it, the more he likes it. Eventually, he starts to ride it not just as an errand bike, but, increasingly, as a roadbike. I can already see where this is heading.

“Please, please,” I plead, “don’t put clipless pedals on it and don't remove the mudguards. “That will bring us back to Square One of you not having a bike to ride in street clothes.”

“Aye, fair enough,” he says. “But I think I’d like to build myself up a wee vintage frame as a proper racer and see how it goes. Maybe something Italian?”

“Oh! Seriously? Well that sounds fantastic,” I say, not really thinking he means it.

Some days later, I walk past his open laptop and, from the corner of my eye, catch a glimpse of something quite disturbing. I try not to look. And normally I respect his privacy, really. But morbid curiosity gets the better of me, and I sneak up closer.

He has browser windows open to the bikeforums Classic & Vintage section. To eBay with various listings of Italian racing frames from the ‘80s, used tubular wheels, decade-old Campagnolo component groups. To an instructional video for how to spread rear dropouts from 126mm to 130mm. To an essay on bottom bracket standards and compatibilites.

“Erm, what’cha doing there, sweetheart?” I ask, in my best attempt at a casual tone of voice.

“Oh…” he replies distractedly, his brain still deep in the throes of problem-solving. “I’m just trying to understand this Columbus tubing chart. You reckon SLX is whole lot nicer to ride than SL?”

I have a look at the chart and am surprised to notice that neither type of tubing is as thin-walled as I would have thought it to be (they are both .9/.6/.9). I send him links to discussions of tubing wall thickness. By the following day, he is better informed on the topic than I am.

By the following week, he’s acquired encyclopedic knowledge of tubing hierarchies, component group histories, ways to ID mystery frames. He is aware of the difference between vintage and modern race fit, and of the exact frame dimensions he’d need for one versus the other. He’s been taking notes in a special little notebook he now keeps in a drawer. He’s been “sniping away” on ebay. He has dusted off the digital scale. 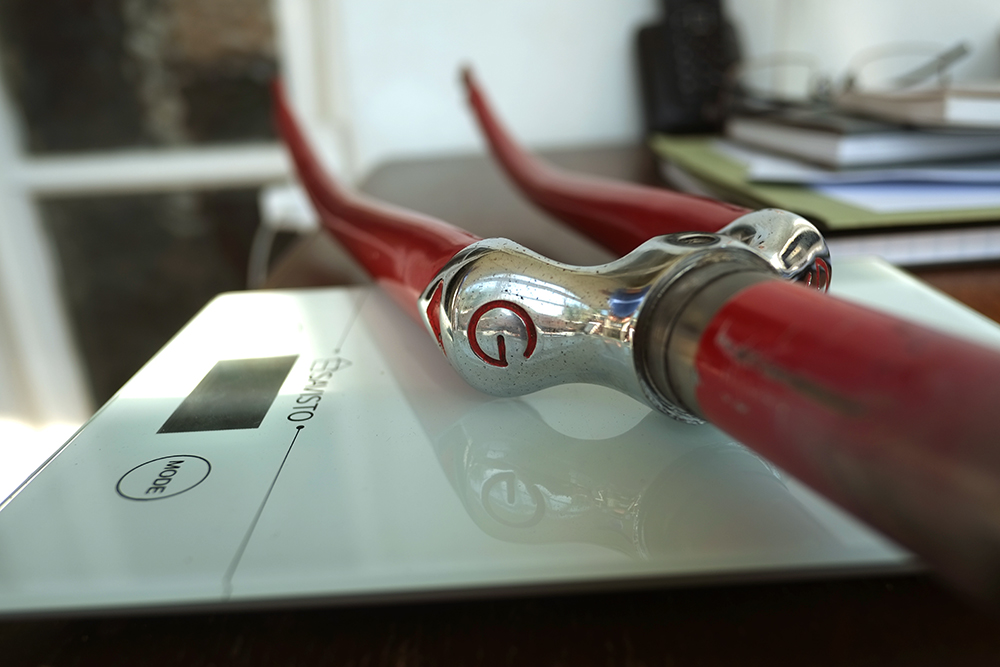 I am trying very hard not to frame this as a gender thing. As in, women do this, men do that. Women like bikes in pretty colours, men like them taken apart, weighed, and measured, then entered into a spreadsheets. Meh.

And as much as I enjoy admiring and photographing the fruits of their labours, I have always thought to myself: "What a relief I do not live with them."

And now? Is the joke on me? Watching him concentrating intently on the various facts and figures he comes across, I am filled with affection - mingled, somehow, with horror.

“Just how bad is this going to get, my darling?” I come close to asking, but hold myself back, as the fever shows no sign of subsiding, second week running.

Most of our time together, we discuss bicycles now. The intensity of his focus, the exacting nature of his curiosity, are stunning and a bit overwhelming. Is this what it would be like to live with a hyperactive pre-teen obsessed with trains, or baseball cards, or some such thing? I think this, then mentally smack myself for seeing my husband in that light. Why are we women such no fun when it comes to this stuff?

"But you said we'd watch the Danish movie and you're still looking at bikes!" I hear myself actually saying. Nag, nag. What exactly is happening here?

Further, why does eBay make me nervous and irritated rather than excited, the way it makes him? Am I just a slave to my evolutionary history? A gatherer, needing to feel secure in my acquisitions? I would rather definitely have a pair of handlebars for £30, than maybe have them for a tenner. No fun is what I am, by the sound of it.

But still: I love bicycles. And I am almost afraid to believe - to trust - that he loves them too.  Can it really be true? Is this more than a passing fancy?

Now every day little parcels begin to arrive - from Italy, Hungary, Austria, England. A crankset here. A stem there. A very dirty (but dirt cheap! and Super Record!) front mech. Some rare, special kind of bolt he frets about being the correct length.

And did I mention there is a frame? 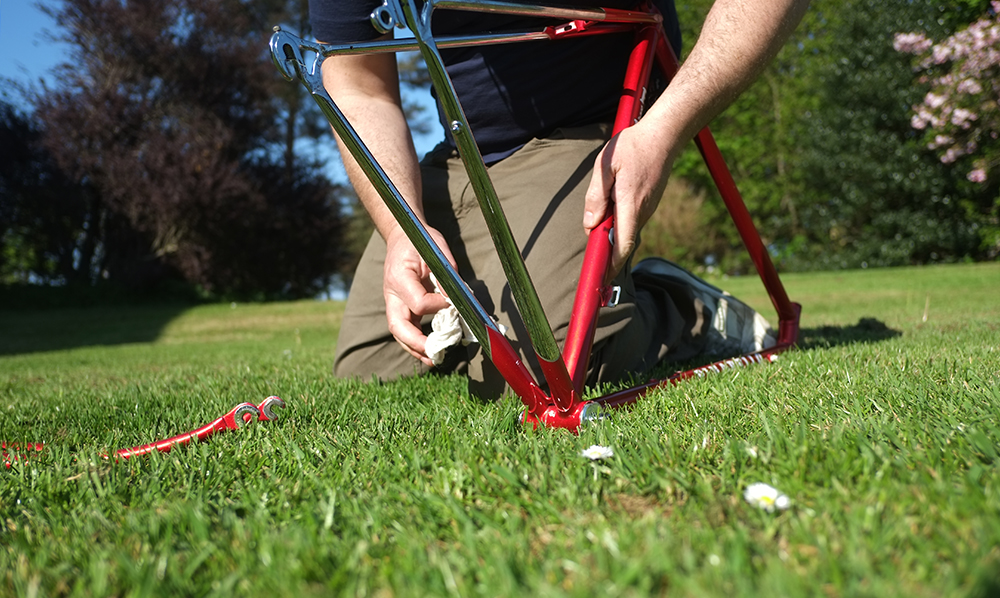 We spot it simultaneously while browsing search results for Pinarello Montello (his dream frame is either that, or a Colnago Masters, mid-'80s vintage), of which it was pretending to be one - but in all likelihood wasn't. However, it looked to be handmade, Italian, and "good." Certainly good enough to experiment with for his first build ("First?!"). And it was stamped, at the seat stay caps and fork crown, with the letter "G" - for Gary. How could he not?

"Did you know I once had a Francesco Moser that looked exactly like this?" I ask, trying to contain the width of my grin. I show him links to Lovely Bicycle posts from 5 years back.

"That's... amazing," he says, taken back for a moment by the uncanniness of their similarity. "And did you like it?"

"I loved it. The only bike I have ever let go of that I miss and think about regularly."

By this he is encouraged. "Don't you worry darling. Once I get the hang of this, I'll build you up a vintage Italian bike of your own, better than that ole Moser with the buckled headtube."

"You noticed that?" I say, rather impressed.

Until now I have no desire for another vintage roadbike. But his easy-breezy promise makes me wildly, unreasonably giddy.

"Just make sure it's not red," I say. I hate red. He asks which colours are acceptable and indulges me in a rather lengthy discussion of why I like certain shades of blue, but not others. His eyes don't even glaze over. "He is a good man," I think. 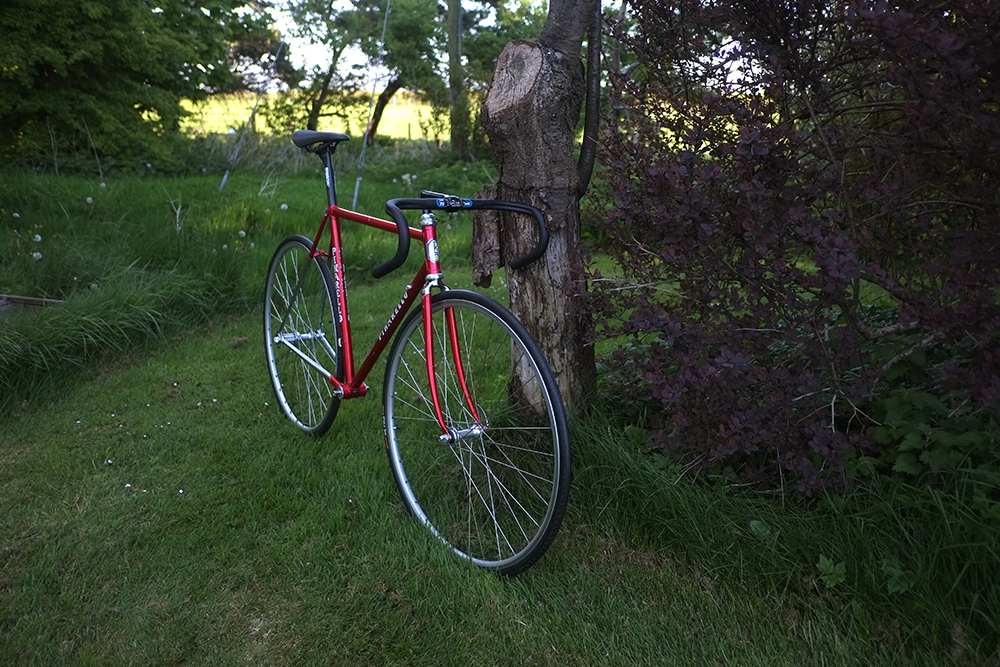 By the time his mystery "G" frame arrives, he already knows how to build it up from scratch (Headset press? Who needs it!), with components that are mostly all here. We spend some happy hours doing this as the sun slowly, ever so slowly goes about setting.

With the physical bike in front of us, my tactile, visual self is now quite contented. I am crawling around the frame with my camera and my measuring tape, smelling the grease.

"Low bottom bracket, just as I thought! And short chainstays. Plenty of front-center. I think you will love riding this thing."

He nods, busily weighing every component before affixing it to the frame, jotting the figures down in his notebook.

"I would love to know who actually built this thing."

"I will put up detailed photos of it," I say, "Perhaps someone will ID it." And this I will do. Once I recover from the novelty of this whole situation.

Diagnosis: Bicycle Madness. It may not be in the DSM. But it's real. And, apparently, quite contagious.